You are here: Home / Lifestyle / Guide To Pumpkin Beer

This guide to pumpkin beer will tell you all about the styles, rankings and popularity of the #1 fall beer!

When the cool, crisp air of autumn rolls in there’s nothing like the first pumpkin beer of the season… well, that’s how it used to be. Now the pumpkin beers start coming out early August, and it’s like we’ve wished away the summer. We’ve all read the articles that go “Pilgrims didn’t have enough grain to make beer so they subbed in some pumpkin. Now craft brewers are making pumpkin pie in a glass!” That’s not this article – I want to talk about pumpkin beer hate. The market is crowded, beer geeks are wary of gimmicks, and breweries feel pressure to get these beers on the shelf. Despite this, pumpkin beers seem to be one of the most popular and coveted seasonal beers, with some breweries’ versions reaching cult-status amongst fans. 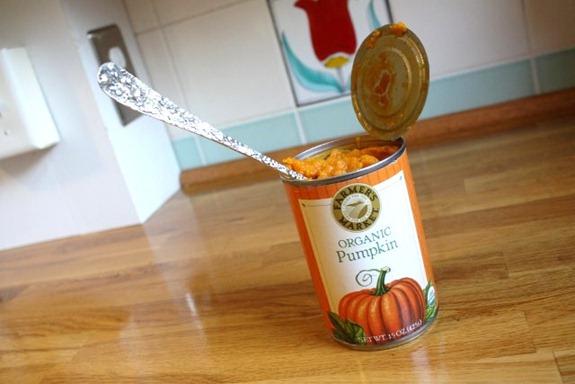 Don’t get me wrong, I still have a lot of positive things to say about pumpkin beer. Despite being a warm-weather, savory-food kinda person, eventually I admit to myself that summer is gone and fall is here. That’s about late September, which brings me to a frequent topic in the craft brew industry, “seasonal slide.” This is the tendency for breweries to release their seasonal beers as early as they can get away with.

I spoke to Jason Petros, a host on The Brewing Network about his perspective on pumpkin beers. Petros has unique insight, as The Brewing Network is an online radio and podcast company that interviews brewers and brewery owners and produces content relevant to homebrewers and beer lovers. “One of the principles of the craft brew industry is innovation and experimentation. It’s a way for breweries to distinguish themselves and develop brands with fanatical devotion. An example of this is the ‘imperialization’ of beer styles that has been the trend for a few years. With pumpkin beer this is especially prevalent.” 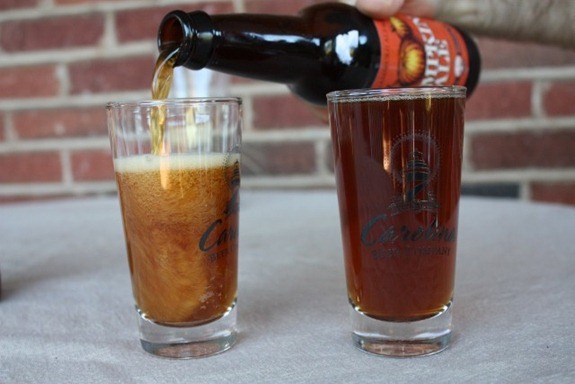 I looked at Beer Advocate’s ratings for the Pumpkin Ale category, starting by sorting the list for the most-reviewed beers. The beer with the most reviews was Southern Tier Pumking (one of Kath’s favorites) with over 5,000 reviews, and Dogfish Head Punkin’ a close second. The third most reviewed was Weyerbacher Imperial Pumpkin with just over 2,000 reviews, and the list drops dramatically from there. 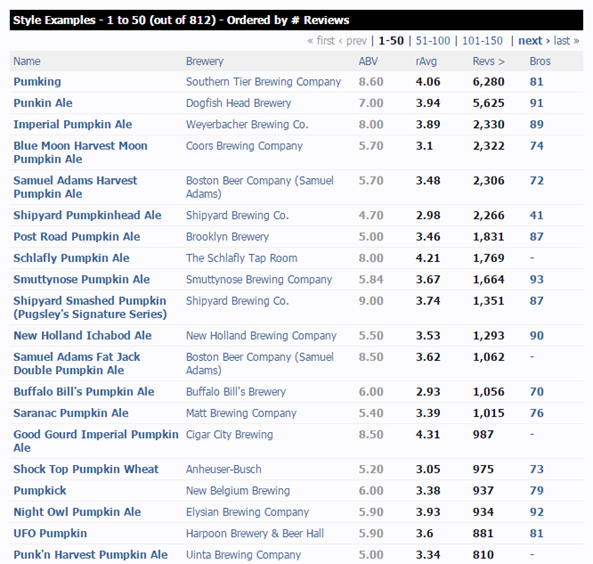 Pumking is at the top

It shouldn’t be surprising that Pumking is at the top – as one of the most uniquely flavored pumpkin beers out there, it’s one of these in the cult category. Besides the classic pumpkin pie spices, Pumking also seems to imitate the crust of a pumpkin pie with a rich, buttery, toasted graham cracker background. Dogfish Punkin’ has been around since 1994 and at the time it certainly embodied the company’s approach to off-centered ales. As a 7% ABV brown ale, it was one of the few examples of Imperial Pumpkin back when most pumpkin beers were simply light, refreshing amber-colored ales and lagers with a little bit of extra spice.

Petros went on to say, “The same thing that encourages brewers to take something like a pumpkin beer, a once delicate and refreshing style, and boost the alcohol and other flavors may be what is making hardcore craft drinkers jaded.” 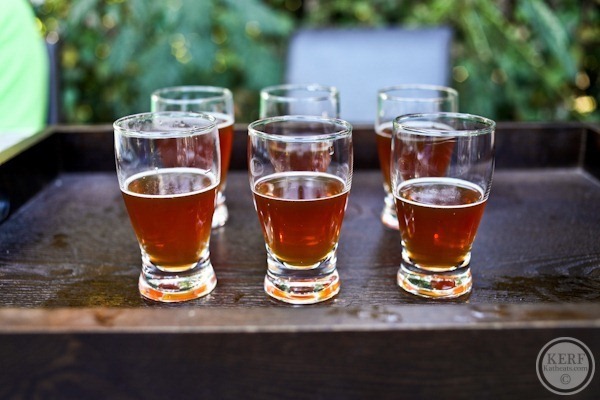 Jay Campbell, the beer buyer at Beer Run, has a differing opinion: “I certainly see the complaints that pumpkin beer comes out too early, and yet you can’t argue with how quickly we sell out of some of these. Even our devoted hopheads will walk out with a few bottles of pumpkin every year when they roll out.”

This describes me pretty well – probably half the beers I buy are hoppy, many of them are imperial, and I’m always looking for well-made examples of the classic beer styles. However, when the pumpkin beers come out there are a few that I cannot miss every year.

We’re lucky in Virginia to have two incredible examples available to us. One is Schlafly Pumpkin Ale from St. Louis, Missouri , and the other is AleWerks Pumpkin Ale from Williamsburg. Looking again at the Beer Advocate Pumpkin Ale category, I took the top 50 most-reviewed beers and then sorted them by their scores. Schlafly and AleWerks are #2 and #3 respectively, with their scores neck and neck. Beer Run experiences a rush on these two with every shipment that arrives, and I’ll say that when I saw these two hit the shelves in early August I couldn’t resist purchasing two six packs of each, just in case I didn’t get another chance! 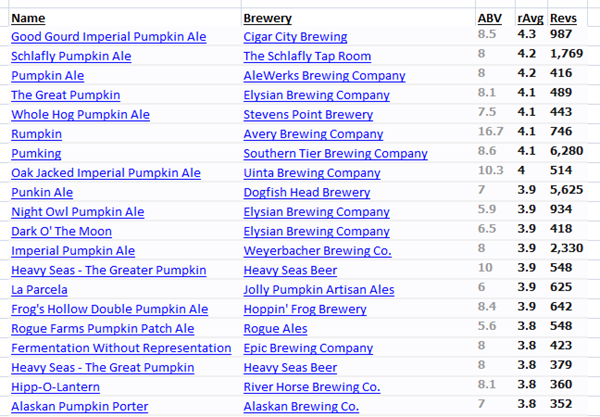 Campbell commented on this, “The thing is, these breweries produced these beers in late June sometimes, because they all need time to age and package. Then they send them to the distributors in mid-July with the okay to send them on to the stores, but we’re seeing the distributors hold off until the beginning of August to release them to retail locations. The high demand for these beers combined with the low supply is what’s fueling the seasonal slide.”

When I bought my case of pumpkin beer, I almost felt the need to promise the cashier that I wasn’t going to drink them now and instead was planning on keeping them in the fridge for at least a month! There’s a stigma that “real craft beer lovers” shouldn’t like pumpkin beer, and that it’s just a gimmick to attract the people who defiantly say they don’t like beer. Is pumpkin beer the equivalent of cheap, sweet, white zinfandel in the wine world?

Looking at the hashtag #pumpkinbeer on Twitter is revealing. The first tweet of the year was on June 30th from the beer news website BeerPulse.com, announcing (appropriately) the availability of Pumking. The next several are retail locations announcing the arrival of pumpkin beers, and then the customer comments begin. Many are positive, but there are plenty of “come on” and “too soon!” mixed in as well. 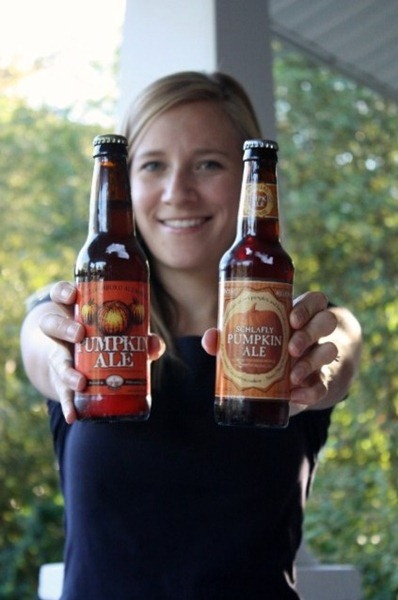 Perhaps the point of contention is the stark contrast between hot summer and the iconic flavor of fall. After all, the winter beer season features barleywines and other strong, warming beers, but there is little complaint when these debut in October because it feels right for the season. But in the same vein of pumpkin beer, Twitter is equally awash of people complaining in March about drinking the newly-released summer beers in the middle of a snow storm.

I have mixed emotions about seasonal slide. As a hot weather lover, I’m never ready to admit that summer is over. Pumpkin beers on the shelf just rub it in my face. But as a small business owner, I definitely understand the pressure that breweries must feel to get their beer out and available. The demand for pumpkin beers drops to nearly nothing after Thanksgiving each year, and no brewery wants to be stuck with unsold product knowing that they likely will have to throw it away. So when’s the right time to brew it? 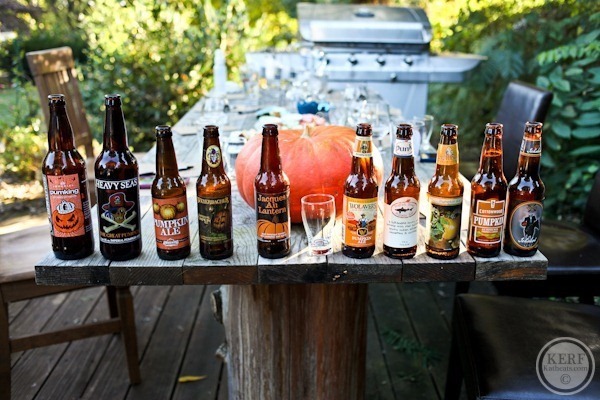 Should you use real pumpkins?

Hunter Smith, president and head brewer at Champion Brewing Company, was adamant that his pumpkin beer be made with real pumpkins, sourced from local farms. That puts the first production around mid September at the earliest, and factoring in the fermentation and conditioning it could be as late as October before customers are having their first taste. This is important to Smith, however, stating “I get sentimentality for the seasons – I’m a sucker for it, and that’s why I think seasonal creep is inappropriate; it just cheapens the season.”

Champion is no stranger to beers made with unique ingredients, from oyster stouts, holiday-spiced Belgian dubbels, and pineapple IPAs, to being one of the few breweries in the world producing the gose style (look it up!) And yet Smith had some reluctance to get in on the pumpkin trend: “There was a lot of pressure to create a pumpkin beer despite my feeling that it’s a rushed and played-out style. I did a Facebook poll to make sure I wasn’t being narrow in my view and it was quite clear I was.” Smith produced two pumpkin beers as a result. The first was titled Kicking and Screaming Pumpkin IPA “as a nod to my reluctance and IPA to make it interesting. I liked it and it was really popular.” His second pumpkin was a 6.5% ABV beer, along the classic lines of pie-in-a-glass. “The IPA and the spice beer were kind of a ‘one for me, one for you’ situation.”

At the time of writing this article (late-October), I’m still seeing a surprising supply of Schlafly and Alewerks pumpkin still available. Is it possible that people are buying less this year? Or have Charlottesville residents been such a high buyers in the past that breweries/distributors are sending more to our area? In either case, with two kegs of homebrewed pumpkin beer on tap, I think we’re firmly pro-pumpkin in our house! 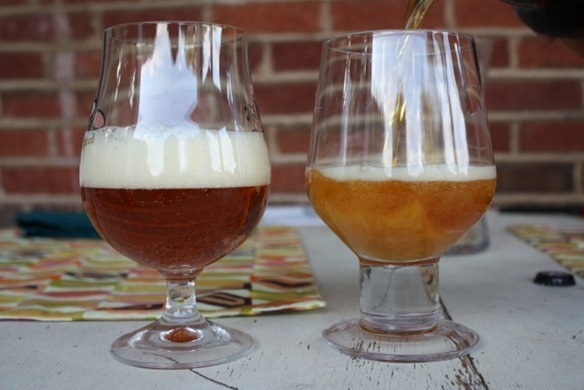 What’s your take on pumpkin beer? Would you consider yourself a craft beer expert or noobie? What breweries are producing some of your favorites?