We love pumpkin beer so much we decided to make our own. Here are two pumpkin beer recipes to get you inspired. 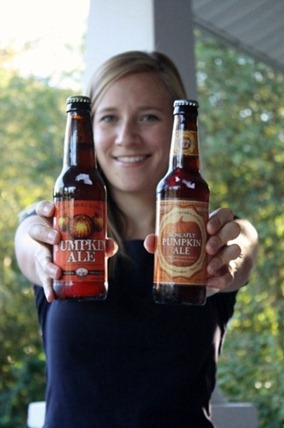 Obviously pumpkin ales are the best beers there are.

Here are some links to my very favorite pumpkin beers:

[I’ve also had: Jack’s Pumpkin Spice, Blue Moon Harvest Moon and Post Road, but didn’t really care for any of them. And maybe a few others I’m forgetting!]

How to Brew Pumpkin Beer

Until I married Kath, I wasn’t really into “The Flavors of Fall,” but man she sure makes you want to like ’em!  So after lots of experimenting and exposure, I learned to love sweet potatoes, pumpkin pie, and maybe even sometimes some cinnamon in our meal (still need some encouragement on that one)!

She loves practically everything about this season, but of course the onslaught of pumpkin ales are a particular reason for both of us to get excited.  I’ve been homebrewing for two years now and have made a pumpkin ale of my own each time.  I’d estimate I made it 75% for her and 25% for me.  What does that mean?  I put a lot more cinnamon, nutmeg, and allspice in than I ever would have in my own beer.  It results in something that’s more of a dessert or a single serving.  Compare this with a light wheat beer that quenches your thirst and you can drink 100 of them and not get too full or ruin your palette.

In crafting the recipe, I first thought about the flavors, aromas, and textures that I wanted in the final beer, keeping in mind that ultimately a pumpkin ale MUST be orangey-reddish when it ends up in your drinking glass.  There’s a lot of debating in the homebrew world about whether or not you should actually put pumpkin in a pumpkin ale.  Sounds crazy, right?  But it makes sense – pumpkin isn’t a very strongly flavored food.  It’s even less flavorful when you dilute it in 5 gallons of liquid.  And it’s even less flavorful when that liquid is beer.  What a lot of brewers do is just add the typical pumpkin pie spices to their beer.  Some commercial pumpkin ales are made this way.  But I kinda feel like to have some legitimacy you have to put just a little real pumpkin in your batch so I go with about a couple cans in the mash.

I did some research online to see what quantities and types of spices people were adding.  Pumpkin pie is of course the model, so cinnamon is in almost every recipe, and nutmeg is a close second.  Allspice is the next most likely but it’s used in very low quantities.  Questionable spices are ginger, cloves, and vanilla, and some people just go with pumpkin pie spice rather than blending any.  I knew I wanted to pick my own so that was out of the running.  I felt that cloves might work but they have a really powerful flavor, and sometimes brewer’s yeast can produce clove-like flavors when not treated correctly.  I didn’t want anybody to be turned off by the beer because of perceived defects so cloves were out.  Ginger was easy to eliminate because I personally feel it doesn’t work well in pumpkin pie – its sharp, bright, piquancy has such a different emphasis from the traditional warm, savory flavors in a pumpkin pie.

As for quantities, homebrew recipes online were all over the place.  Online forums are great sources of information for homebrewers, but you really have to do a lot of research and average out everybody else’s recipes.  Unfortunately you can’t trust everyone’s palette – when one guy puts a quarter cup of cinnamon in his batch and can barely taste it, you begin to distrust everyone as a result.  It seemed to me that people were adding spices in similar quantities to making a single pumpkin pie, or maybe slightly more than that.  My feeling was to treat the spices like hops are used in beer – have one addition towards the beginning of the boil that focuses on bitterness, and one towards the end that adds flavors and aromas.

Even though this beer has a lot of specialty ingredients, the grains that go into it are still the most important part.  Besides a typical does of base malts, you want to concentrate on specialty malts that amp up the dessert-like qualities of the beer.  Depending on how sweet you want it, caramel malts will probably make up the largest part of your specialty grains.  The darker roasted caramel malts add flavors like toffee, raisins, and plums, and the lighter ones add more sweetness, candy, and bright fruity flavors.  Pretty much anything will work so long as you keep in mind that it’s easy to go overboard with the darker crystal malts.

If you’re like me and want a really creamy mouthfeel, consider adding things like rolled oats or barley, wheat malt, or carapils.  All of them will thicken the body in different ways, and you can further emphasize this characteristic by slightly under-carbonating your beer.  I find that these two techniques create a sensation like drinking a latte – thick foam sitting on top of a rich beverage.

When it comes to bitterness, I feel that pumpkin ales should have extremely few IBUs (International Bittering Units). I get some pushback on these opinions from other brewers, but I think the point is to make a dessert beer.  If you increase the bitterness, yes you’ll increase that “thirst quenching factor” (when you have a sip of a beer and the sensation in the back of your throat says, “Have another sip!”), but I think it takes away from the sweetness and the pie-simulation.  Also, I feel that the spices add their own kind of bitterness to the beer that helps to balance everything out.

Finally, there’s the yeast selection.  American ale yeasts have pretty neutral flavors that let the beer ingredients shine forward on their own.  I’m partial to English yeasts because they’re extra malty and really transform the beer into something unique.  They’re a little sweeter, however, so make sure to keep the sweet/bitter balance in check if you go this route.

I love this style of beer because there’s so much to discuss, and one person’s perfect pumpkin ale could be completely different from someone else’s.  When you go out to buy commercial examples, try to snag a few at the same time and do some taste testing.  The amount of variation is astonishing, and pitting a few against each other will make it easier to pick out subtleties in each one. Here are two of the pumpkin beer recipes I have made.

Mash at 155*, including the pumpkin.  If you’re an extract brewer, maybe just use one 15oz can of pumpkin in the boil, but keep in mind how much volume you’ll lose when you transfer to the fermenter.  You might want to strain the wort through a paint strainer.

The variety of hops doesn’t really matter when you’re adding this little… I was just using up what I had.

Pitched with a 2qt starter of yeast 1056 – California Ale Yeast.  I fermented for 7 days, then added 1 vanilla bean that I split lengthwise, scraped out the goo, and then threw everything into the fermenter for another 9 days.  Then I bottled and let carbonate.

Mashed at 160* (which was an overshoot of my 155* target).  The differences between this recipes are switching flaked barley for oats (cause it’s KERF, man!), subbing carapils for the carafoam and caramunich, and adding some whole cane sugar.  The reasons for these last two changes are covered in the yeast section below.

I didn’t add the vanilla this time around because I didn’t think it added that much in the final beer.

This time around, I opted to pitch a 1gal starter of WLP004 – Irish Ale Yeast.  I was planning on using English yeast but the homebrew shop was out, so I thought this would be the next best choice.  It’s still a little sweeter than American yeast, and it has nice flocculation.  Because I overshot the mash temp, I added the cane sugar to dry the beer out.  Also, the grain changes were due to this being a sweeter yeast as well.  As you can see, I kept the spices the same!

I’ll have to report back with my thoughts on batch #2 when it’s done fermenting, but overall I like my recipes.  They achieve a nice balance, and I think they taste like what somebody expects when you hand them a beer and say, “It’s a pumpkin ale!”  Noticeable spice but not overwhelming, heavy and creamy body, light sweetness and toasty flavors.

I hope this post inspires you to go out and buy or brew your own!