After picking up our CSA this afternoon we stopped by Trader Joe’s for some supplies. And learned that you can mix and match TJ’s beers for $1 a piece in a six pack. Not bad! So we collected a sample, which was mostly wheat beers along with 2 pumpkins and an IPA. More on these later 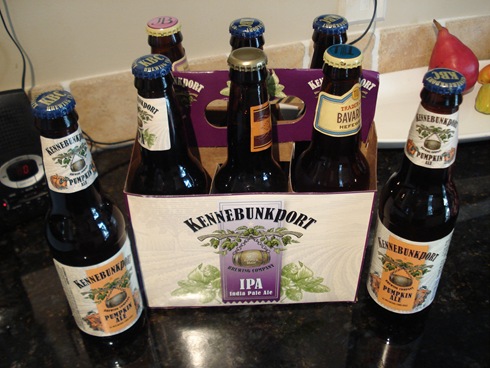 Here are the other things I got at TJs: the infamous pumpkin butter, pasta, nuts, cheap meat, CRANBERRIES!!!!!!!! (I’ve waited a whole year!), squash, a honey graham Z bar (I have to give them a second try after all the hype) and some other stuff. Included in the selection is European Yogurt. There was NO GREEK YOGURT there. Just a hugeeeeeee shelf full of Fage and this new kind. I was so puzzled and thought maybe they changed the name to European from Greek for some reason, so I bought a container to see. It was not Greek. It’s basically just a thick, tangy non-fat yogurt. Now that we have it, I’ll have to eat it, but I will seriously be heartbroken if something happened to TJ’s greek yogurt. 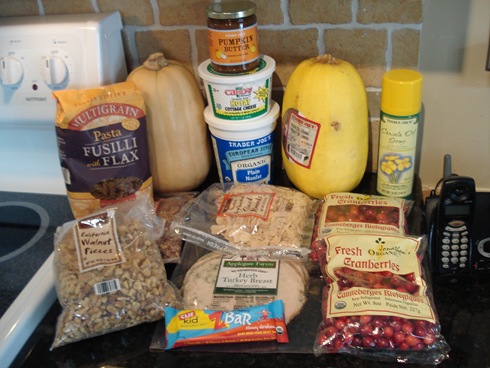 I almost bought some maple pecan granola until I took a look at the ingredient list and knew I could make it myself. So I did! It is FABULOUS!! The whole house smelled like the best instant oatmeal smell and it tastes buttery and sweet. Here is the recipe: Maple Pecan Granola. 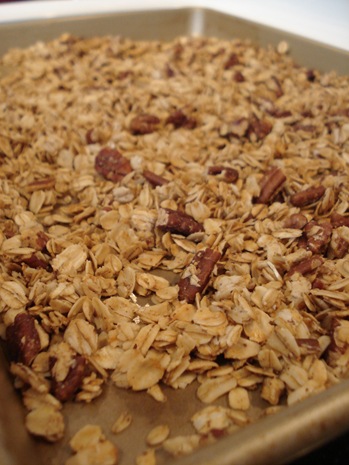 I snacked on about 1/4 cup’s worth as it came out of the oven and packaging it away.

Around 6 we decided to break open our six pack sample. Of course I started with the pumpkin. Which was VERY disappointing. It tasted like someone took a Bud Light and “pumped” (heh heh) some pumpkin syrup in. Bleh. 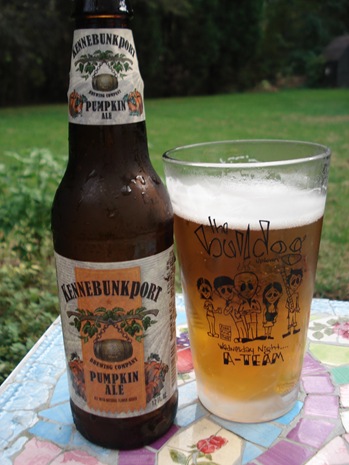 I drank 1/3 and gave it away to go try another. He enjoyed having both. The IPA (on the left) was actually quite good if you like IPAs. 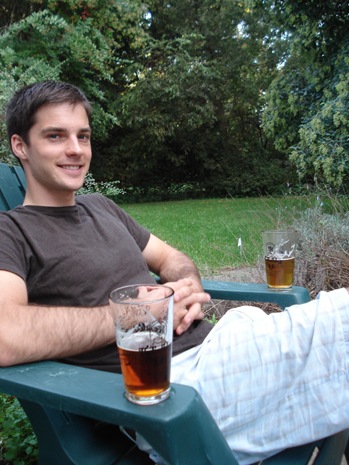 The Apricot Wheat Beer was better, but still not fabulous. The aroma and first sip was amazingly apricotty, but then there were the undertones of a cheap canned domestic beer. (Yes, I am a beer snob.) But I liked this one enough to eat it all. 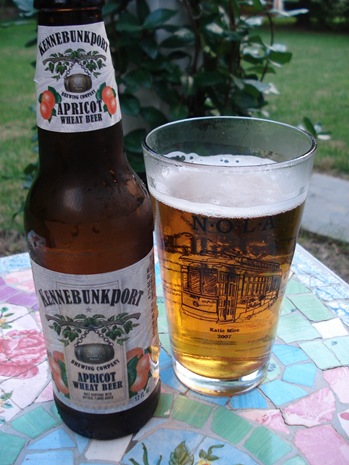 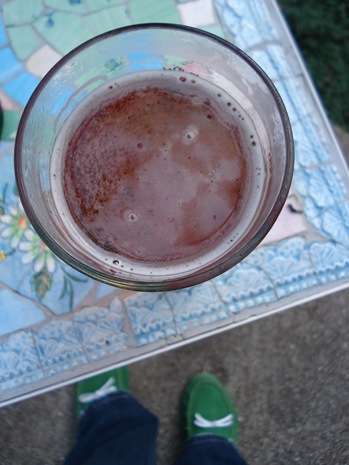 We had some company! Unfortunately we found the carcass of his brother in our screen door the other week 🙁 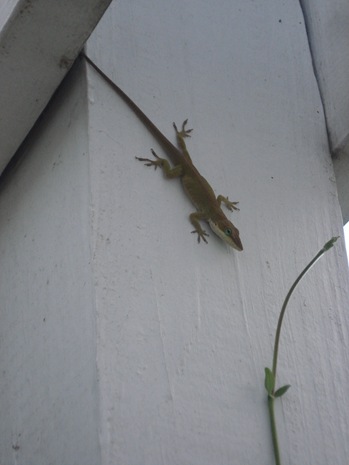 The beers filled me up, but the husband was getting hungry so we made dinner. We had planned to make a polenta-greens recipe I saw in a recently issue of Real Simple but at the last minute I realized we had to use up this tomato sauce so our plans changed. And THEN I remembered we had this Cheddar Herb “Scuffin” (scone + muffin) from Great Harvest to eat, so we left the spaghetti out of the dish and had that instead. OMG. SO GOOD!! (And probably very unhealthy too…) It was like a sweet scone but with a savory twist. 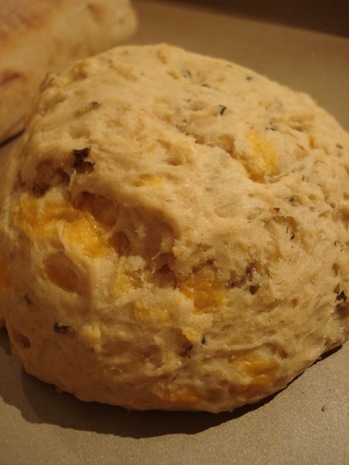 So for the main course we had thawed out a chicken breast from the freezer and just sauteed that with 2 small eggplants, leftover acorn squash and turnip/carrot/squash mix, and leftover jarred tomato sauce. It was all topped with Parrano cheese and herbs from the garden. 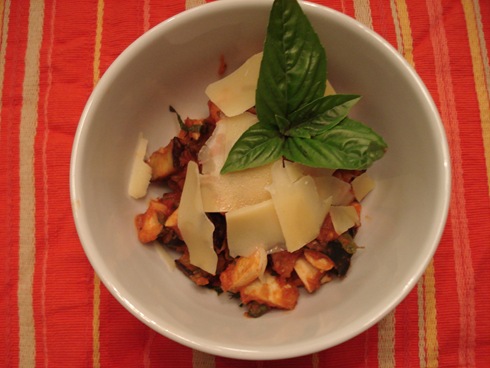 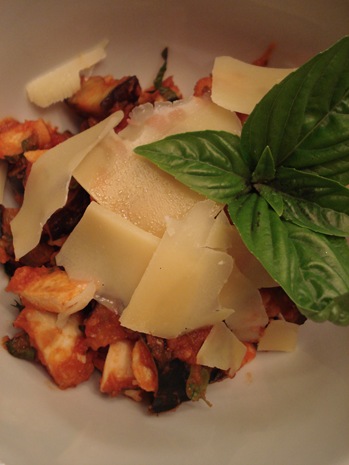 I could have just had this for dinner and been so happy: 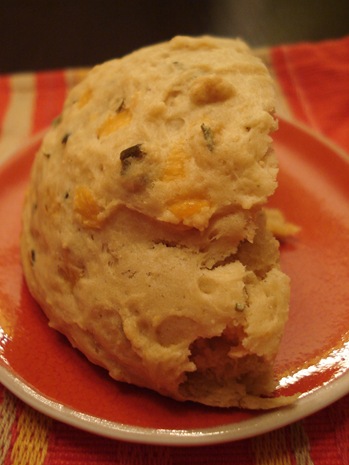 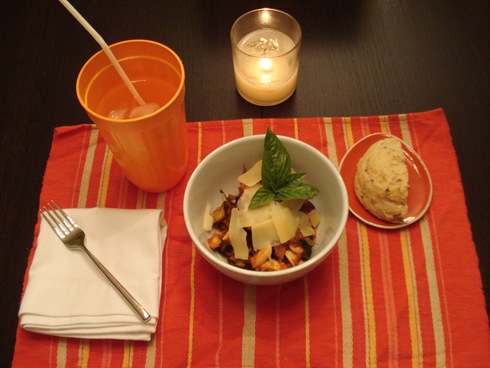 I’m actually really full tonight. Guess it was all the beer!

I think the husband’s 6 hours of sleep x3 caught up with him because he doesn’t think he can stay up for The Office. It might have to become breakfast entertainment. I have a feeling we’ll have a lazy morning tomorrow with oats and coffee before we get the day started, but then again he might be up at 6am bright eyed and ready to go.