You are here: Home / Weekend / Perspective

Even as someone who enjoys exercise, on the days I don’t start with a workout I sometimes let it hang over me. I know I’m always happy when I’m there, but it’s just the thought of going that’s dreadful. But I’ve noticed that if I few the gym not as a place to go and sweat hard but as a place where I can go to mentally relax and read a magazine, then it’s much more appealing. Today with beautiful weather and lots of time, I put myself in the mindset of looking forward to my workout and the bike ride to and from, and what do you know, I left 30 minutes earlier than I had planed to go because I was looking forward to getting outside and taking a break. Sometimes a simple change in perspective is all it takes.

Once home I scrubbed the master bath from top to bottom. I LOVE my new Mrs. Meyers cleaner !! It works really, really well. I think the Basil scent is absolutely amazing, but I have the Lemon Verbena one right now in their concentrated All-Purpose Cleaner.

But before I started cleaning, I put a halved acorn squash in the oven. I didn’t really know what I wanted to do with it but I figured I should get it cooking. The result was quite interesting: 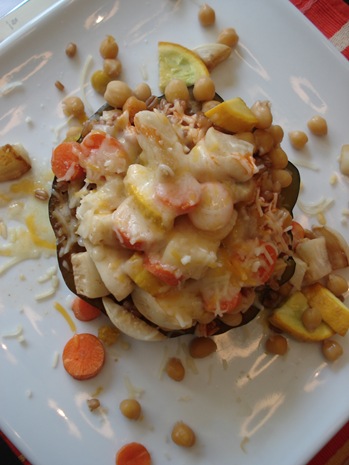 Once I got downstairs I realized I had some turnips and carrots to use so I chopped those up and added them to the roasting pan. I just let everything cook until tender at 400*. I have no idea how long that was – 30-40 minutes? (One acorn squash half and some veggies are already on my plate!) 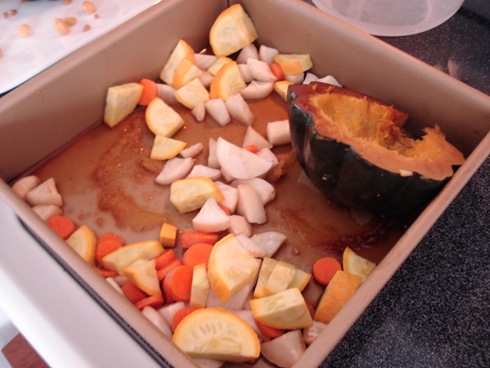 I also decided to add in the rest of my garbanzo beans and some wheatberries . 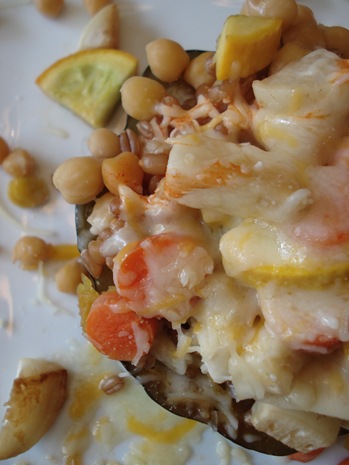 I have to admit that this could have used more forethought in the flavor dept. I went back and added a little brown sugar to have with the stuffing base once the cheese was gone. I was just too hungry and lazy to come up with anything to toss it all with. Hummus would have been good. I thought about cottage cheese as well as adobo chilies but decided against both. But the possibilities for flavors are endless. 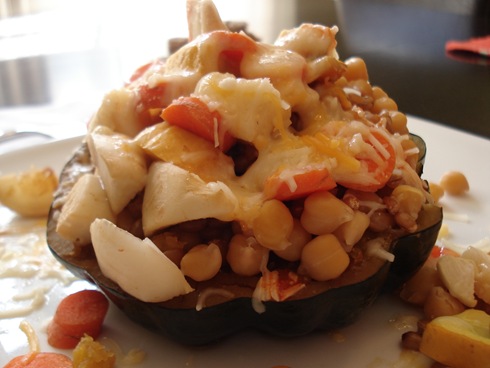 Plus a slice of bread "crackers." Since we have so much bread I make myself eat it (which isn’t hard at all!!) but I also like to eat my grain sides in bite-sized pieces like crackers, so cutting it up like this is the perfect solution. 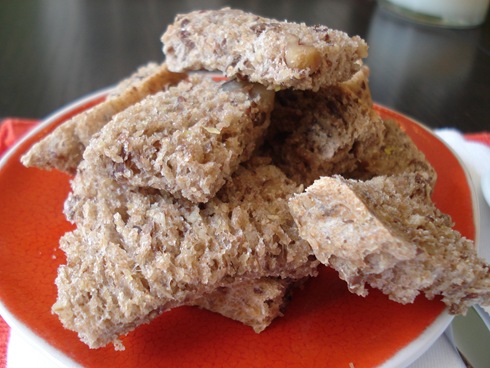 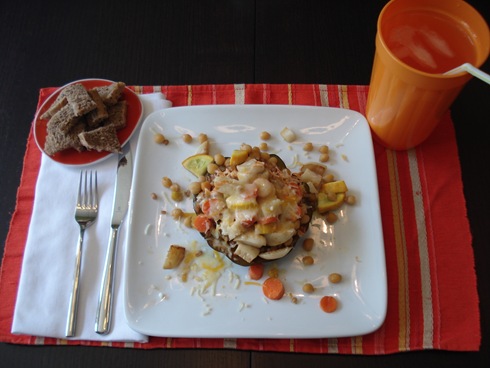 We have to go pick up the CSA again because there was major confusion yesterday and the husband left it there thinking it was our partner’s week. Ugggg. I HATE going down there. If we do this next year (and we haven’t decided yet) we will definitely do the home delivery, which was only $2 more per box. I think it’s worth it not to have to pick up at inconvenient times.

The husband is home and it’s his "weekend" today and tomorrow!! He worked for 12 days in a row, so he’s really excited to have a break, although he says that since he gets afternoons and mornings off frequently that the hours/shifts aren’t as bad as working in corporate America.

Another fabulous sweet potato lunch from one of our favorite readers: VeggieGirl !! 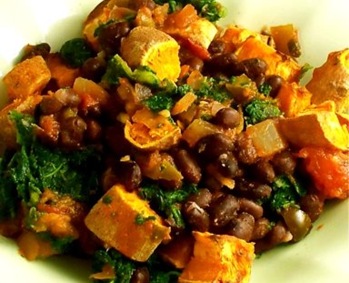 Since I follow a high-raw diet, I consume mostly raw foods with a portion of cooked foods. To be more specific, I consume about 80-90% raw foods (10-20% cooked foods) during the warmer months, which decreases to about 70% raw (30% cooked) during the colder months (**this is true/what works for me – not all high-raw foodists follow the same percentages; and a high-raw diet may not be for everyone).

With autumn weather in full-swing here, and temperatures beginning to drop somewhat rapidly, my body is starting to crave more warmer foods/meals than I did just last month (when the weather was still "summer-like"). So, I created a dish that packs a lot of warmth, spice, flavor, and nutrition – a dish that I (rather lamely) refer to as my B-S-Cubed Dish.

What on earth does "B-S-Cubed" stand for, you may be wondering? Well, it stands for each ingredient that is present in the dish (I know, I’m so clever): black beans, a sweet potato (the first "s"), sauteed spinach (the second "s"), and salsa (the third "s," hence the "cubed" part of the title; and it is the extra hot & spicy kind of salsa – just how I like it). This dish is sensational – period.

Hope the sun is shining where you are!