Goodness. I really haven’t had much of a chance to breathe today – except during yoga!!

At my internship this afternoon we were busy planning two separate manager meetings. 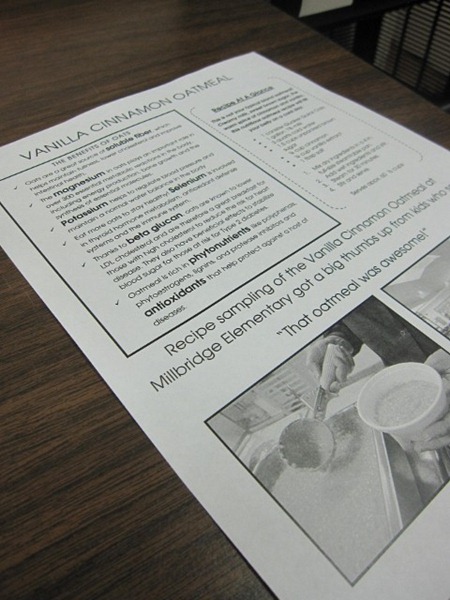 And for the other I made menus of the items we’ll be serving featuring a fresh crunchy orange vegetable! Can you see it!? 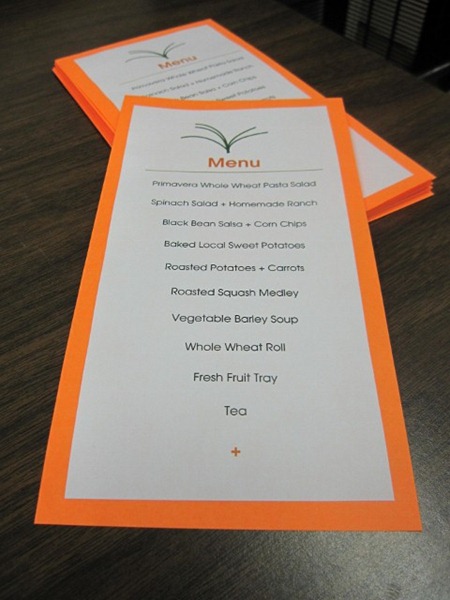 I had lots of fun being creative!!

Right when I was hungry for a snack (we in school foodservice eat lunch in the 11:00 hour because we have to be there at 7:30 and have eaten breakfast so early – plus the kids eat at lunch so most of the staff eats in the 10:00 hour!)…..

So anyways, right when I was hungry for a snack at 3PM, my coworker brought in a huge batch of….. 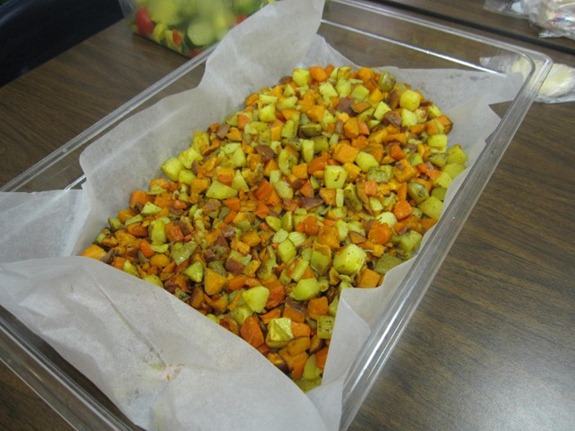 Plus some steam-baked zucchini, squash and peppers in herbs.

A health nut’s perfect snack – I had two of these! 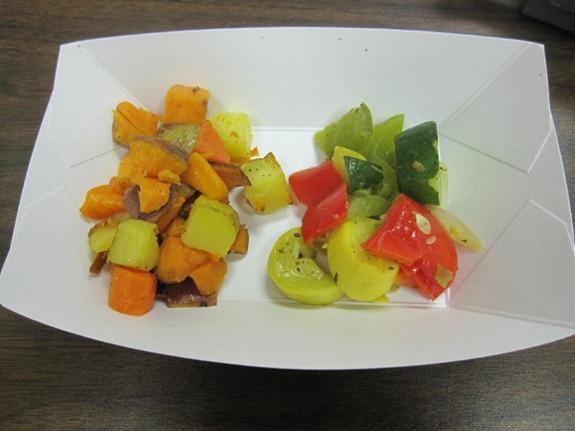 I commuted home to find that Great Harvest had sent flowers!! All of our paperwork was finalized this week – so exciting! We’re officially starting the location hunting process in the next few weeks! 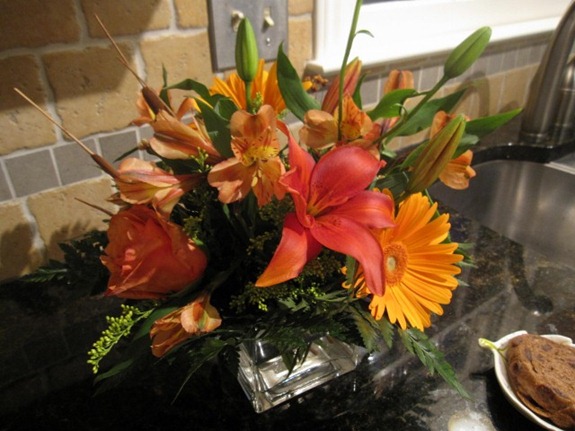 I was hungry again for a snack (this was now 5:45) before yoga. I pulled out a PB+J that I’d been carrying around for 24 hours to finally eat. 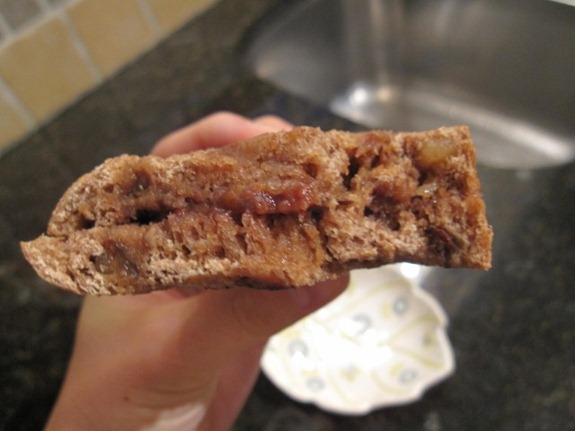 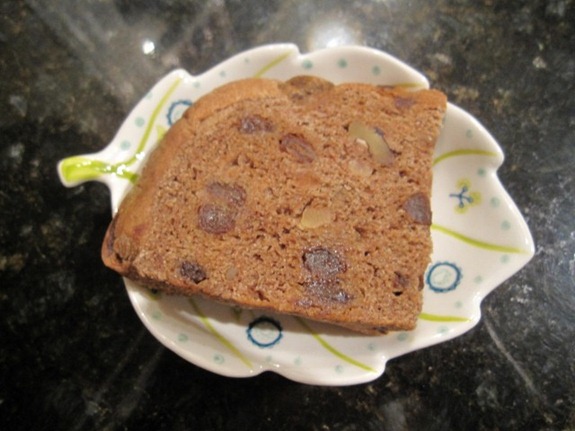 Next stop: yoga! I had to change, get BACK in my car and head over to the studio, which is about 20 minutes away. Guf!

I met Emily + Whit for Long, Slow, Deep – a 90 minute stretch class. The class was a LOT more stretching and a lot less vinyasaing than I had imagined. We didn’t do a single chataranga or warrior! Sadness! I was a bit disappointed at first, but then I realized that with all of my ailments – neck/shoulder blade knot still slightly hurt, back not hurting but still not 100% and of course my everlasting foot problems that all I needed tonight was a good stretch. The class ended up being really good and I got quite the S-T-R-E-T-C-H. Tanner gave me a back massage (I told him of my problem) and helped me modify poses so as not to push myself too much. And one can never fail to mention the foot massage he gives at the end. So heavenly.

Me + Yoga = The biggest “I told you so” in history

I didn’t get home until 9PM – past my bedtime!! I was a little hungry and wanted  green monster, but honestly a salad was easier and faster to prepare so I threw stuff in a bowl: 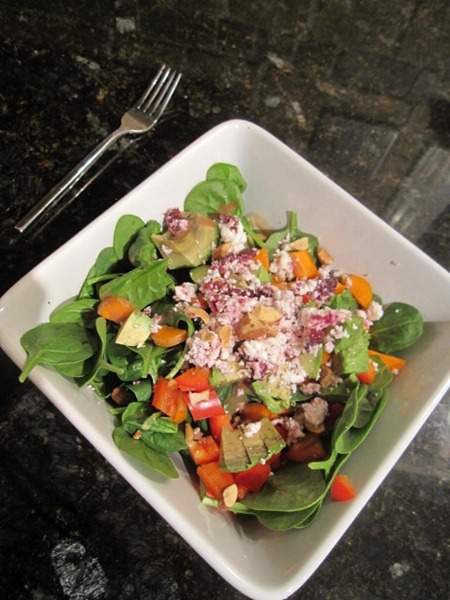 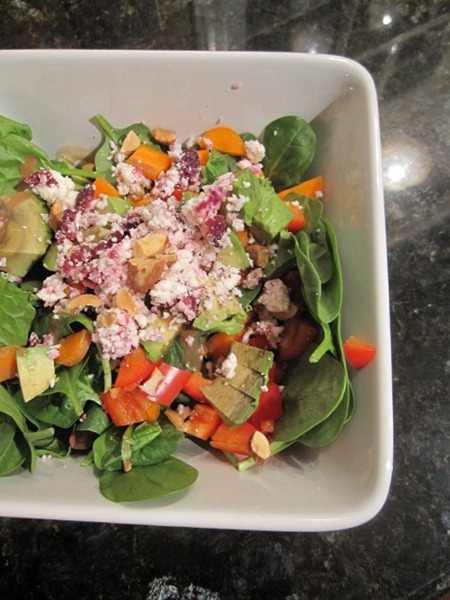 Debating if I should wake up Matt and shower or just get in my bed and shower in 7.5 hours. I barely got sweaty at yoga, so don’t think I’m all gross like that! I need to get to bed ASAP and don’t want to go to bed with wet hair – OR wake him up.