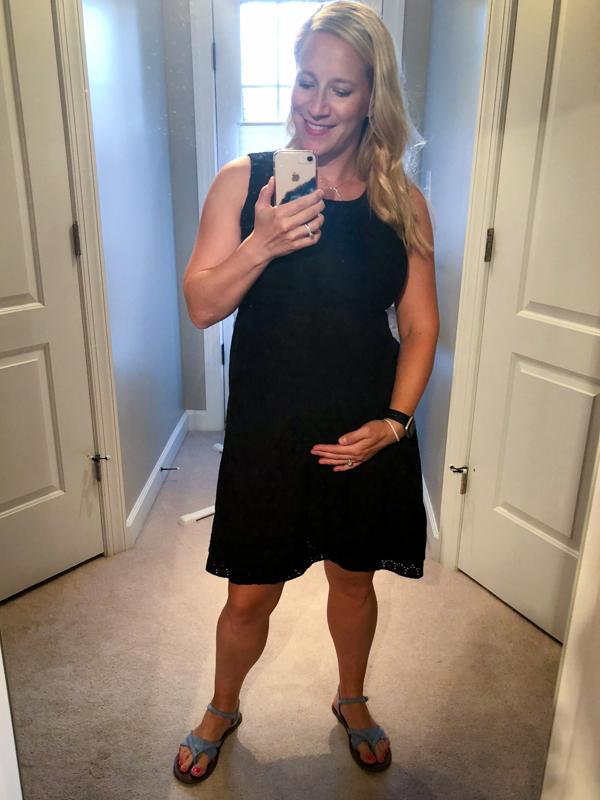 Black hides it so well

I getting SO excited that the end is near(ish). (Near = still likely 2 months away!) Now that I’ve gone on my last trip and September is here, I feel like we are in the home stretch. I have that “if he comes any time soon, I am ready” feeling. I’m not sure I’m “pack-the-hospital-bag” ready, but maybe I should do that soon, just because. I know HE is not quite ready yet, and even though I get excited thinking about him coming sooner rather than later, I truthfully do want him to stay in there until my due date exactly because that would be best for his health.

1) I suddenly feel huge. Like as huge as I was the day I delivered Mazen. (Is my memory just tricking me or am I bigger this time? I don’t know.)

2) Because his movements have been CRAZY lately! Very “baby like” and full of limbs and body parts! 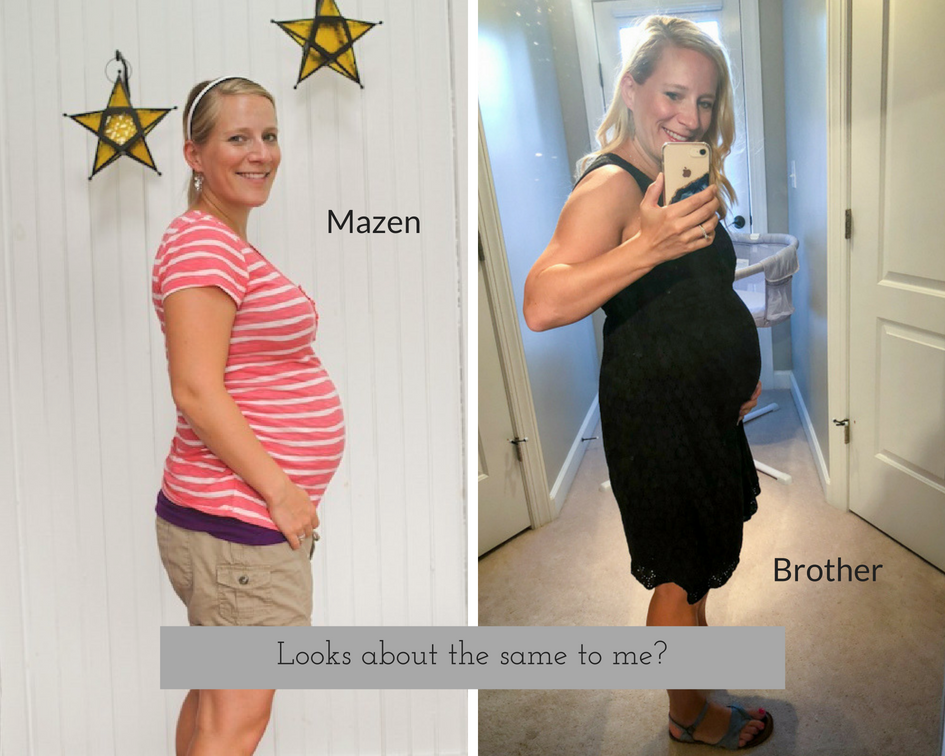 Early on the movements were more like little pokes and pops that weren’t all that human-like, but now, mostly as of 32-ish weeks, I feel like I have a giant baby in there! I know it sounds silly to say because obviously there is a baby in there, but pregnancy is just so crazy. I’m having a hard time believing that I have 2 more months to grow bigger because I already have that “I’m ready to pop” feeling. Ahh! Some of his movements actually hurt a lot. Sometimes it’s like he crowds up in one area and the pressure is pretty painful. I also have a tender spot on the right center that hurts a lot when he presses on it too much. He LOVES the right side of my uterus, which I think is slightly tilted to the right to begin with. I don’t know if he has ever visited the left side!

I had a lot of fun the other night playing with what I assume was a leg. I felt like there was only a centimeter of skin separating us and he was just right there, slowly moving his leg around. I almost felt like I could have grabbed it!

A new symptom I’ve been feeling has been pressure on my cervix. If I were 39 weeks, I would think maybe I had dilated some and he was about to fall out! It’s not an all-the-time feeling, but sometimes when I stand up it’s like his head is right there on it. Maybe I have dilated just a wee bit? Or maybe it’s just the position of his head sometimes? My doctor thinks he’s head down, which is good news. I do feel a lot of limbs on the sides and top, so that would make sense too. 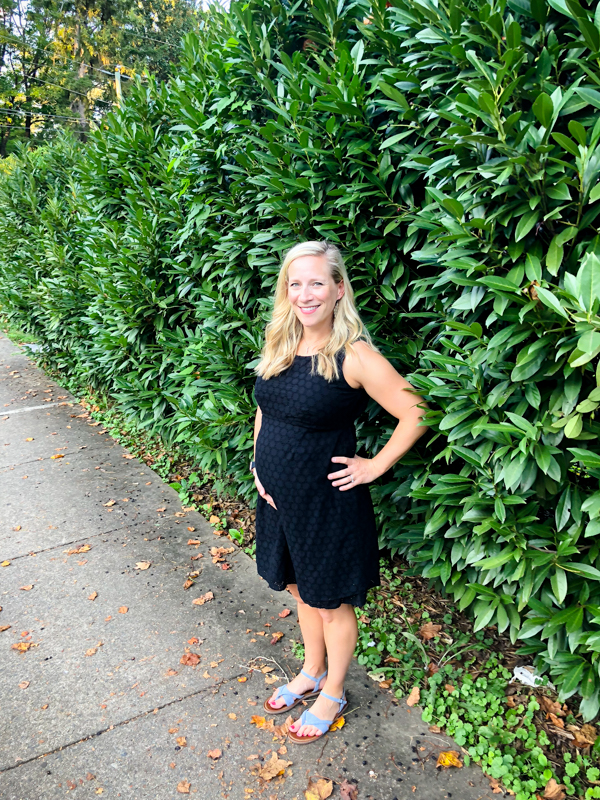 Rolling over in bed is now pretty challenging, and I have to scoot my hips over from one side to the other before I roll. I also have to keep my knees together because if I don’t I feel this odd pop in my low back that’s kind of freaky. It’s not painful at all, but I don’t like making it happen, so I have to roll over very carefully.

Other than those two things, I’ve been feeling pretty good. I’ve gained about 20 pounds at this point, and feel fairly energetic in the mornings. I do seem to get more tired than usual if I’m on my feet a lot or traveling/walking, but overall feeling good.

Knock on wood, but I haven’t had any of the insomnia I had with Mazen. I have had a few little spurts of it and I haven’t been sleeping all that deeply, but I just open my Kindle if I’m feeling awake and that usually shuts my racing mind off and puts me back to sleep. (Shout out to Kindles! The super low glow of the screen is SO nice for night reading!) I’ve been obsessed with my Snoogle pillow. I don’t remember it being this comfortable with Mazen. The new jersey pillowcase helps so much! But I just checked and this EXACT WEEK I wrote about it on Baby KERF so I must have been feeling the same! It’s so funny what I don’t remember from my last pregnancy but since I have a detailed diary of it, it’s so fun to look back and laugh at how similar my thoughts and feelings were.

I haven’t had any of the rib pain that I had with Mazen yet. I am thinking that due to this being my second pregnancy, everything is more relaxed out and less pulled in and up, so my bump is lower than last time and outside of my ribs instead of up under them. Unless the rib pain is coming soon… dun dun dunnnn. I’m pretty sure I was in the thick of it this time last time.

I like to write these posts without reading my posts with Mazen first (so I am not biased), and at this point I just read my 32-week post. All the same thoughts! Lumpy movements, right side heavy, feel small one minute and huge the next, starting to waddle. Yup, yup, and yup! 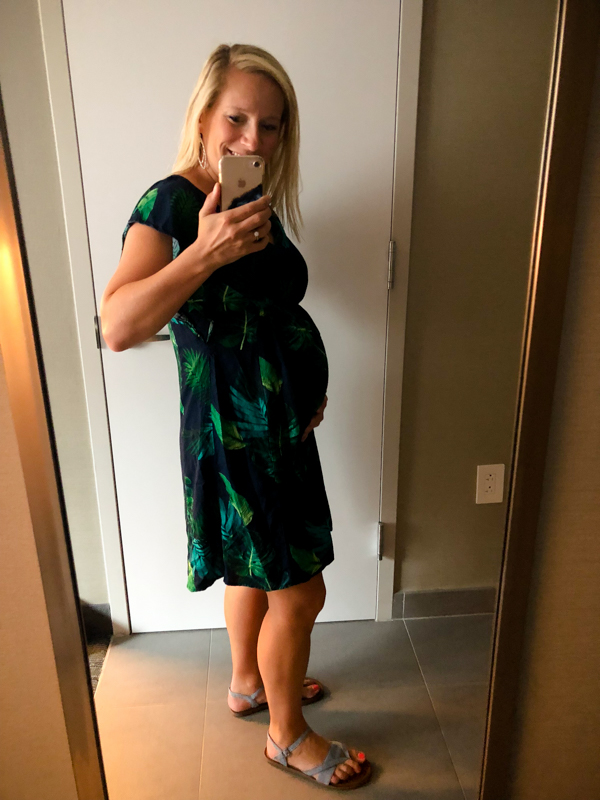 I’ve been nesting like crazy, trying to get my work and home life organized. But what else is new? 🙂