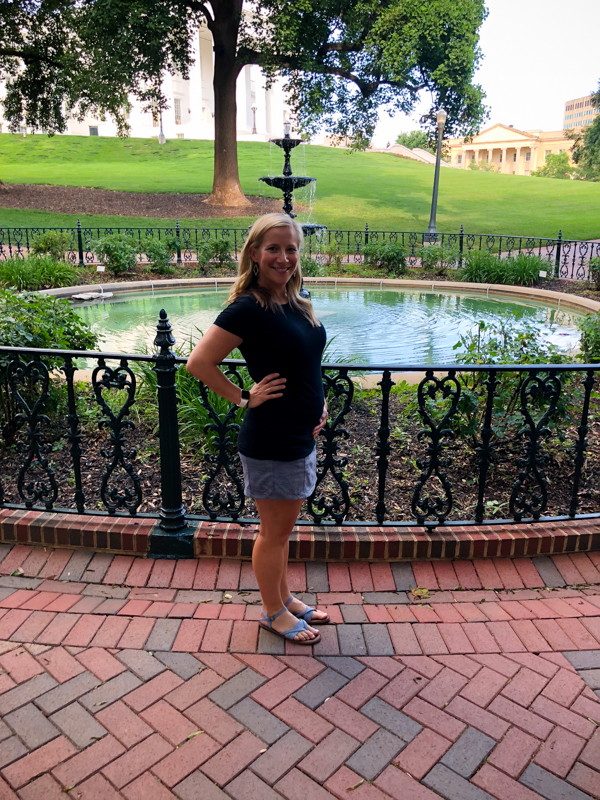 During the first trimester I was literally counting down the hours between ultrasounds. I was so nervous about miscarriage and so sick that it was hard to be myself. Now that I’m in the second trimester, the time is flying by! I remember scheduling our 20-week ultrasound and thinking: That’s so long from now! And the next thing I knew I didn’t have time to count down days because it was already here!

Both Thomas and I were nervous going into the appointment because they scan all the baby’s major organs and look for anything abnormal. We both let out a huge breath we’d been holding when it looked like everything was healthy. I’m a lot more anxious about things going wrong this time around, and I’m well aware that even if they baby is born healthy, the worry never ends.

Baby B (which stands for Baby Brother, Baby Boy, Baby B versus Baby A) was wiggling around a lot in there. He was in a pike position with his hands shooting out in front of him nearly touching his toes! We weren’t able to get a good profile pic, but look at this leg! 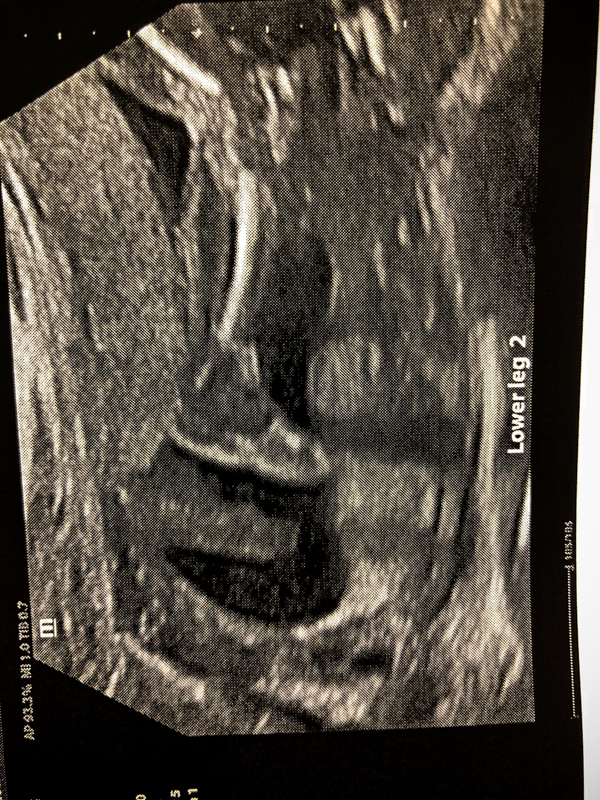 Some more body pics – he’s measuring nearly 3/4 of a pound in weight. Ultrasounds are crazy! 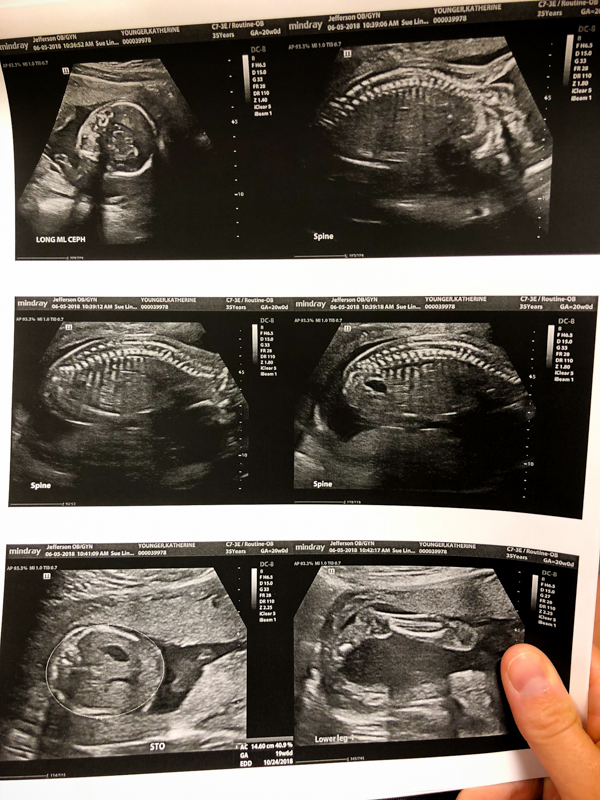 I’ve been feeling really good in general with one major symptom: the SI joint pain persists. I have now seen a body work specialist, a chiropractor (x3) and gotten a deep tissue prenatal massage. I’m trying all methods! My back doesn’t hurt when I’m still, but if I move after resting in a position for a while, particularly if I move fast, it feels like a knife in my lower back. I get off the couch like an old woman! Sitting criss-cross-apple-sauce is nearly impossible, and every time I roll over at night, I’m in pain. Despite the fact that the pain is sharp and uncomfortable, I’d take back pain over nausea any day. I know there are much worse symptoms.

The chiropractor gave me lots of advice that I didn’t want to hear: take a break from strength class, wear tennis shoes at all times, sleep on my back (ugh!), get a new pillow, wear a belly band all day long. I know she is right, but I’m just feeling so normal otherwise that it’s hard for me to make so many (kind of annoying) changes at once. I took a break from strength class last week, and I’ve been making the other changes day by day. I’m feeling so much better this week.

Interestingly, I don’t remember getting SI joint paint until 25-26 weeks last time, but in my 20 week recap on Baby KERF I wrote that I’d been having trouble with it since 15 weeks. I’m still amazed at how similar my two pregnancies have been thus far. (I even describe the urge to do deep stretches when I wake up in my old post and have been having those same crazy stretching cravings!) 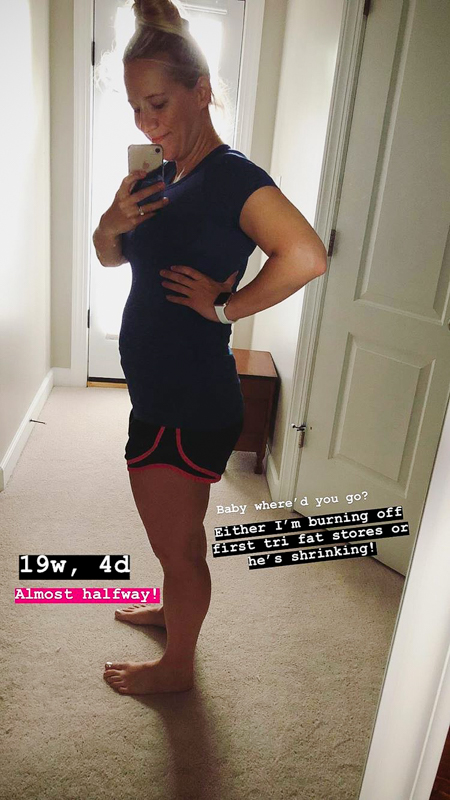 I’ve been feeling something in there since about 15 weeks, but it was all very light and unpredictable. Kind of like someone thumping a bowl of Jello. Right at 20 weeks, I started to feel real kicks and rolls nearly every hour. Thomas was even able to feel one from the outside!! I’m SO happy to be feeling the baby move now, and it’s my favorite part of pregnancy.

I am starting to edge out of being to sleep on my stomach, and therefore giant pillows have taken over my life. I’m sleeping with a king-size pillow between my legs and up my stomach to lean against. It’s so annoying to have to move it under the covers when I need to roll over! The pillows also make me hot. My chiropractor wants me to sleep on my back as much as I can to avoid twisting my back, so that has been hard too. I feel so vulnerable on my back! Like Mazen might karate chop me in the throat or jump on my stomach in the middle of the night : )

I’ve also had a few nights when I have gone to bed feeling a little bit hungry (but didn’t really have any appetite or I was literally too tired to make a snack) and woke up with insomnia. One night I was awake for an hour before going downstairs and swigging some Gatorade from the fridge and that put me back to sleep.

Overall, I’ve felt really hungry these past few weeks yet I haven’t had much of an appetite. I’ll go from not wanting to eat to being ravenous in a matter of minutes. It’s very odd. I’m trying to eat as mindfully as possible and going my hunger cues, plus making sure meals are adequately sized. Strangely I haven’t been craving sweets very much. (That could be related to warm weather.) 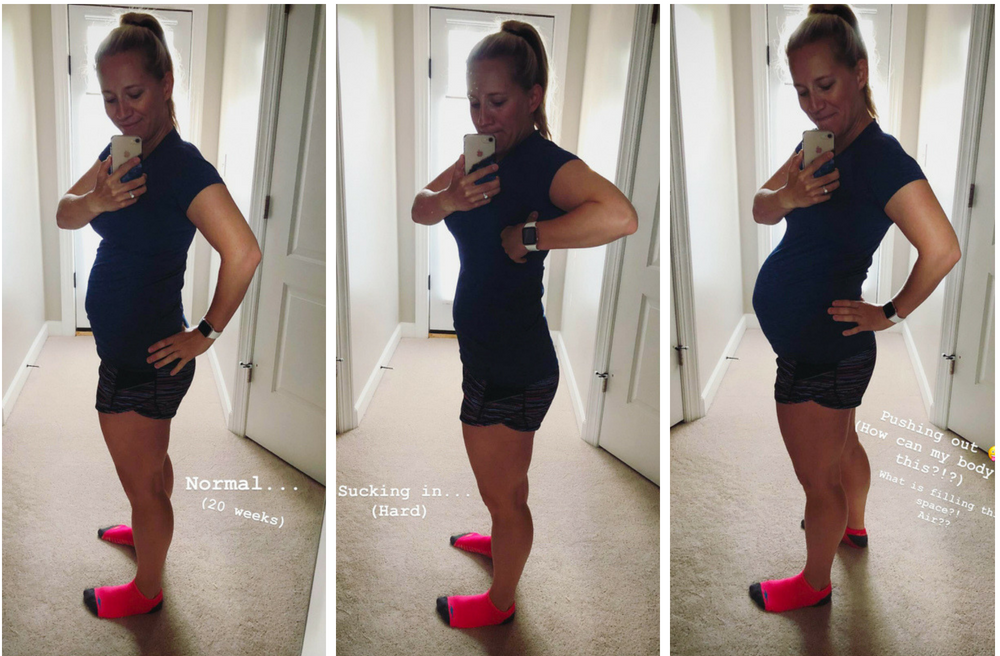 ^^ I am so weirded out by how much I can make my shape change by sucking in and pushing out! Bodies are so strange! I love to suck in and then slowly push it all out for Thomas and Mazen – it’s like a pregnancy time lapse!

At 21 weeks, I’m feeling so much rounder. I’m turning ‘pregnant on the sides,’ meaning I can feel my uterus on the sides and I’m feeling more three dimensional instead of one flat plane. 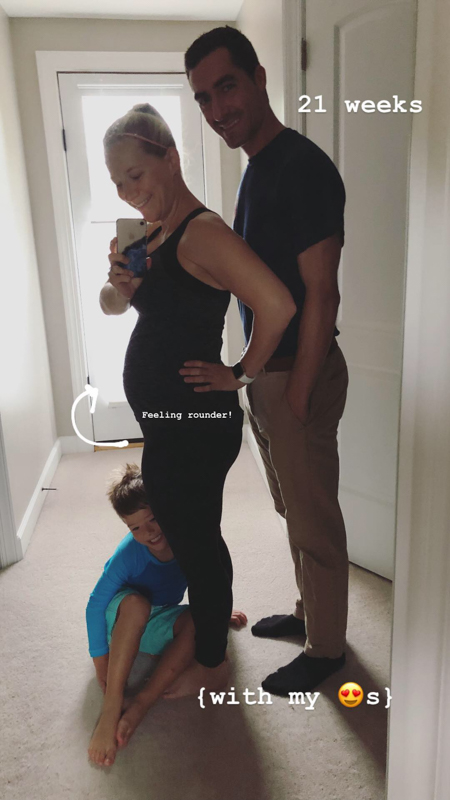 Mazen told me the other day that he and Brother already love each other because they are connected through their brains. I have no idea where this idea came from, but it was the cutest thing he’s said so far! Maybe they are actually communicating already!?

According to Baby KERF I might go through a big growth spurt in the next few weeks. I think I started to look much more pregnant at about 24 weeks last time. I’m anxious to see if I follow the same path this time. Overall, I’m thankful that things have gone smoothly thus far. That is all one could ask for.