Thank you so much for all of your enthusiasm for our baby announcement on Friday! We had so much fun doing the photoshoot. Let me answer as many questions as I can! 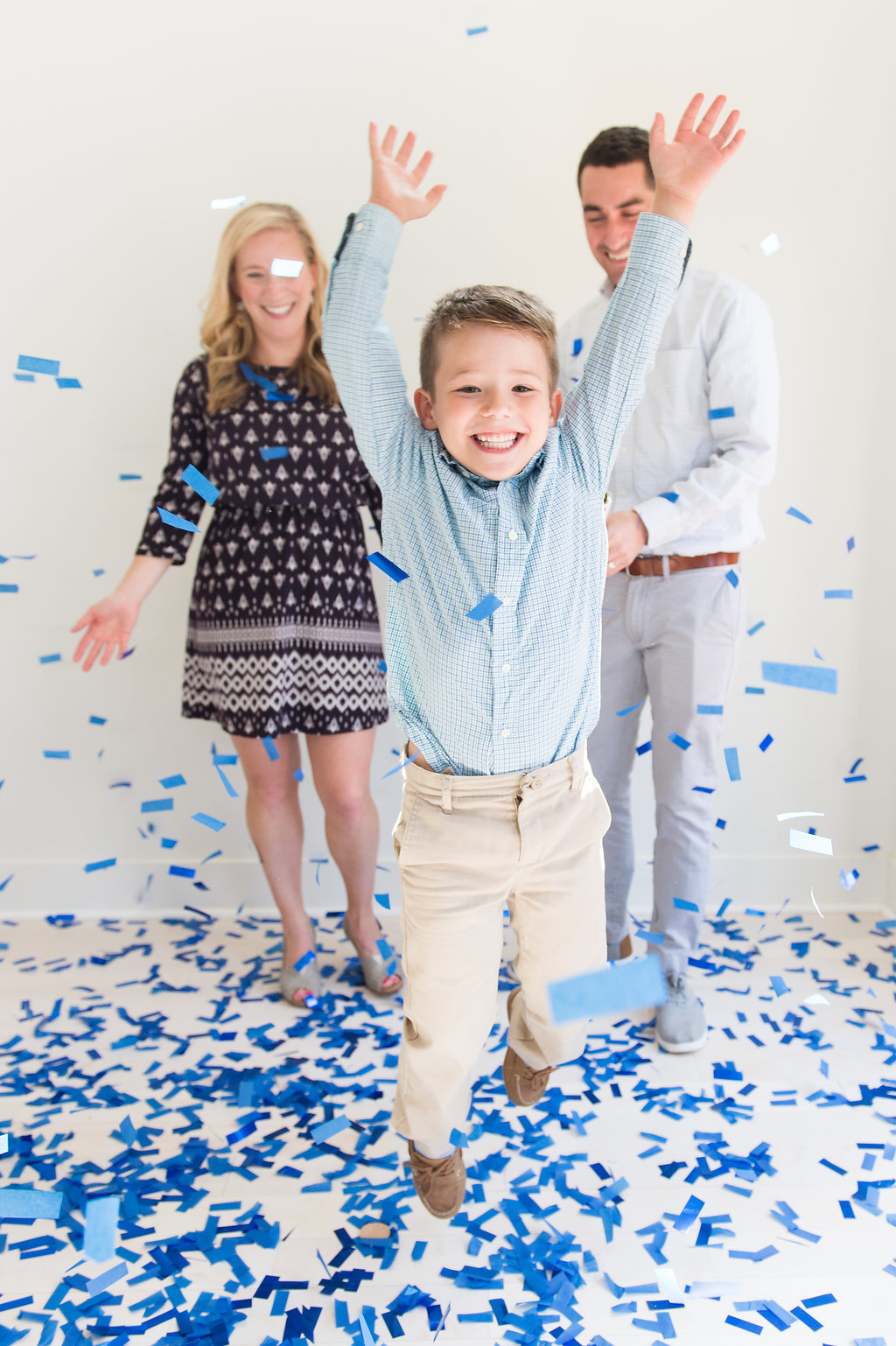 I’m due October 22 – smack in the middle of birthday week! My sister and Thomas’s brother were both born on Oct 18, and I’ll be 36 on Oct 26. It will be fun to see when the baby comes! Mazen was a week late, but maybe this one will be right on time. There’s going to be a blog baby boom that week because Jenna is two days behind me and Ashley is just a few days behind her! I know of a few more announcing soon too! It’s been fun to chat with them during the first trimester. : ) 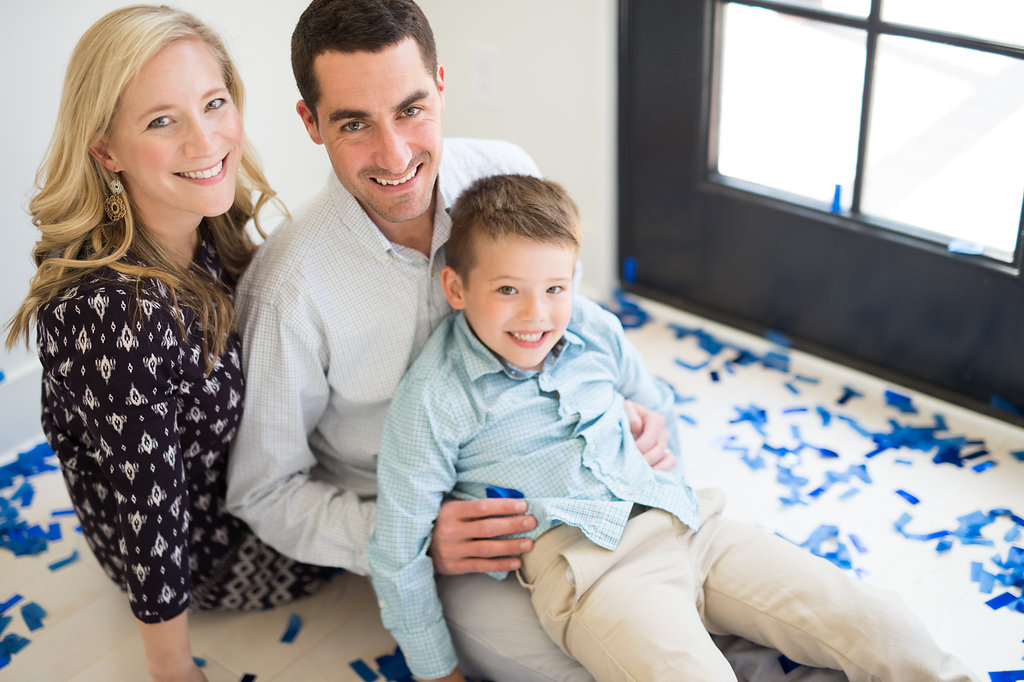 I’m 14 weeks along today, so I’m beginning the second trimester. I do plan to share how the past 12-ish weeks have gone, but I’m saving that for a separate post because there is too much to type! I can summarize it by saying this pregnancy has been very similar to my pregnancy with Mazen: all day nausea, Unisom + B6, a million food aversions, lots of cheese, no salads, and fatigue. Thankfully I’m feeling much better! 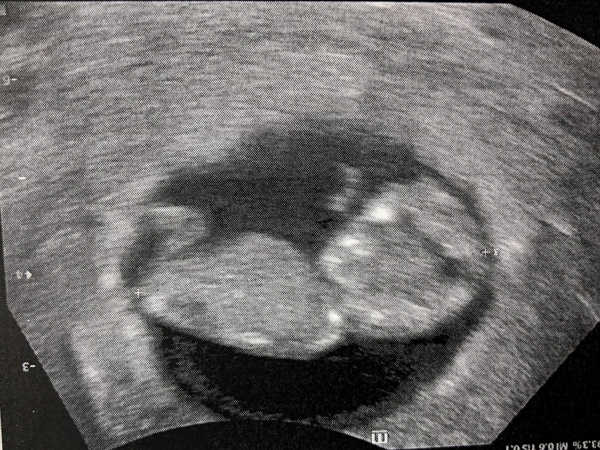 We had ultrasounds at 6 and 10 weeks that showed a healthy baby and genetic testing (because I am now an old lady aka “advanced maternal age” and it was covered by insurance) and that’s how we found out the sex. We had the doctor write “boy” or “girl” and put it in an envelope and took it to Sarah Cramer’s studio. After Mazen and I had had so much fun with confetti there a few years ago, I knew confetti was the perfect gender reveal! I bought these cannons online and we arrived with both pink and blue. Sarah opened the envelope and handed us the appropriate color. It was such a wonderful way to find out! I honestly did not care if we had a boy or girl since I would be equally as excited to have a brother for Mazen and re-use all of my boy stuff and to try out all the new stuff with a girl. But Thomas and Mazen were both on Team Boy, so when the confetti came out blue, we were all thrilled. I’m happy that they are so happy! 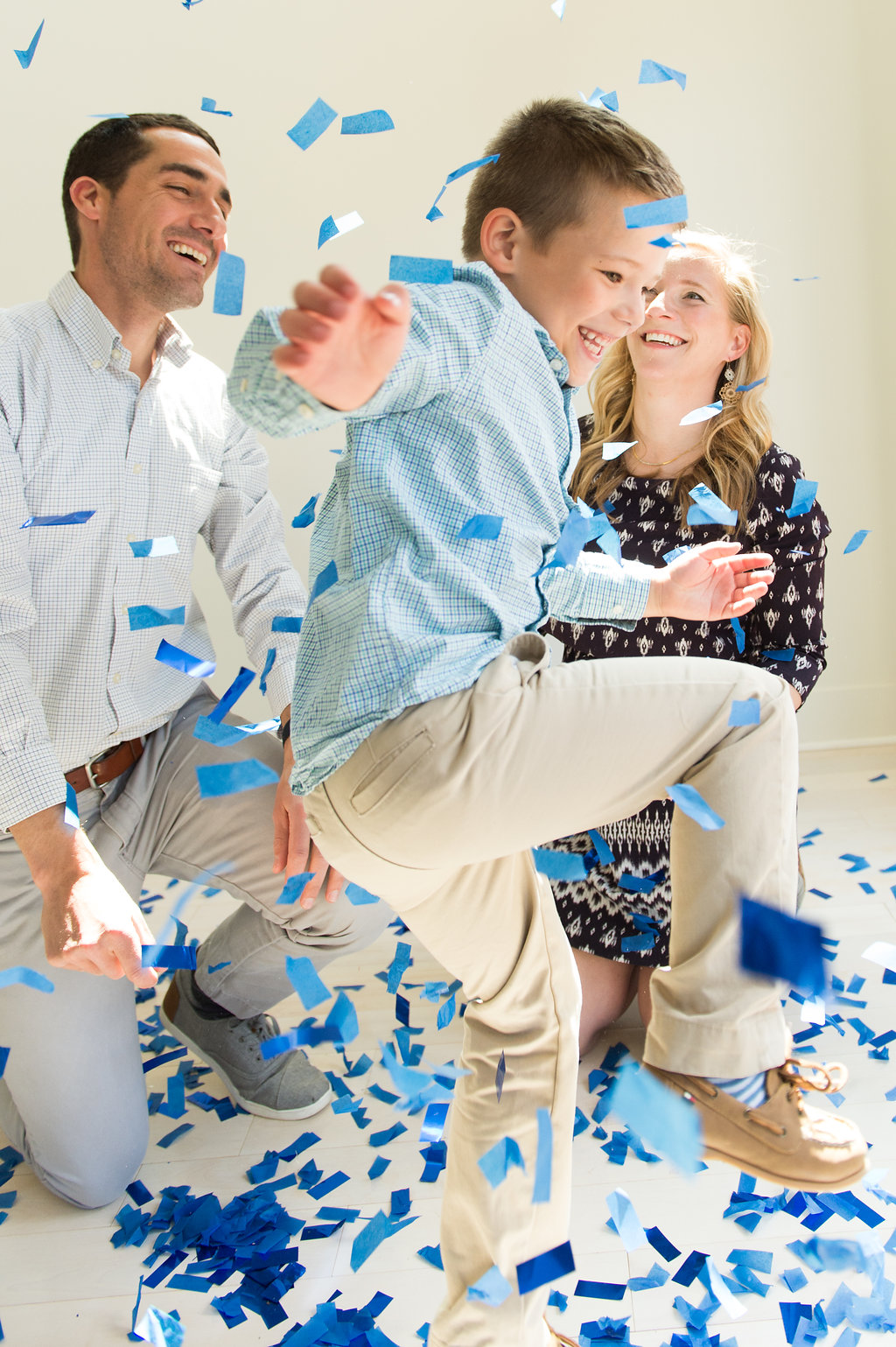 We had one cycle in between our miscarriage and conceiving this baby, so we were very lucky to get pregnant again soon. I’m sorry if it feels like I shared the miscarriage not too long ago. Honestly I didn’t feel mentally ready to share about our loss until I had another baby on the way, so that’s why the timing feels a little smushed. I had to follow my heart on when to share, and I wanted to share that story separately instead of putting it at the beginning of this one.

Because of our miscarriage, we were both very guarded this time around. I refused to let myself get too excited until our first ultrasound at 6.5 weeks, and even the weeks after I tried to focus on other things (aside from feeling like crap all the time). We didn’t tell Thomas’s family until 8 weeks and we told my family at 11 weeks on Bald Head. Of course, I can’t keep a secret, so many of my friends knew early on, especially those who know I love a glass of wine. By the time I shared the news with you guys, most of Charlottesville knew (or could tell by my rounded belly, which has started getting double-take looks).

When I told Thomas about the baby we lost, I shared the news with a book of dad quotes. (This one!) He gave it back to me “for next time” when we went through the miscarriage, and I had it tucked away. So, when my test turned positive this time around, I could not contain my excitement so I simply put the book on his pillow at bedtime. He figured it out right away, but like I said, we were both more guarded having been through an early loss, so we just hugged and smiled and said “Let’s hope this time we bring home a baby.” 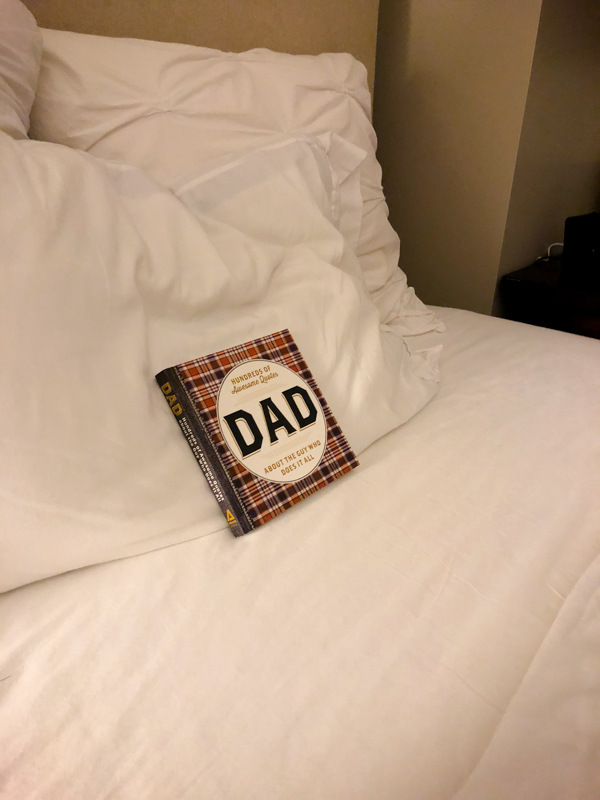 We told Thomas’s family when we had dinner at their house a while back. Yes, it was the night of the “Family” cake, but no, that had absolutely nothing to do with a baby! Eileen had gotten that cake not knowing. She just loves her family! I was so mad that some of you guessed I was pregnant because of that cake because it was not intended to be a hint! 🙂 Since this is Thomas’s first biological baby, they are all over-the-moon excited. 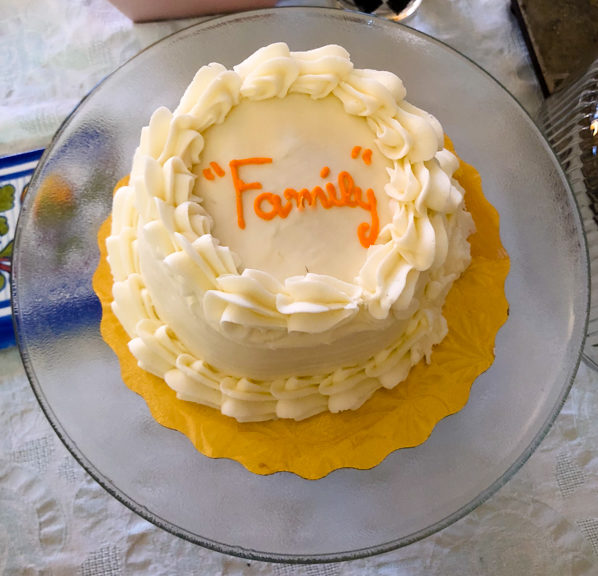 We told Mazen the morning we left for Bald Head, knowing if we’d told him any sooner the whole world would know. We had been talking about babies for weeks, and one day he said: “Mommy I want a baby brother!” I replied with, “OK, I’ll get to work on that sweetie!” He paused and with a funny look said: “What do you mean you’ll work on it?” Not ready for the baby-making conversation quite yet, I just stalled, during which time he said “Well, I know how babies are made!” Another long pause on my end, “Oh really?” I replied….. “Yes, you pray to God and he puts the baby in there!” LOL!!!

So, he said a prayer and for the next few weeks we would listen to my tummy to see if anything was happening. He told me in the gym locker room that my tummy was in fact growing (thanks Mazen!) And so it didn’t come as too much of a surprise when we presented him with the ultrasound pictures the morning we left for Bald Head and said, “We went to the doctor so he could look inside and there IS a baby in there!” He seemed plenty excited. Since then he’s been talking about his “baby brother” a lot and has been collecting trinkets to give to him when he comes (a free fidget spinner pen being the most recent gift)! 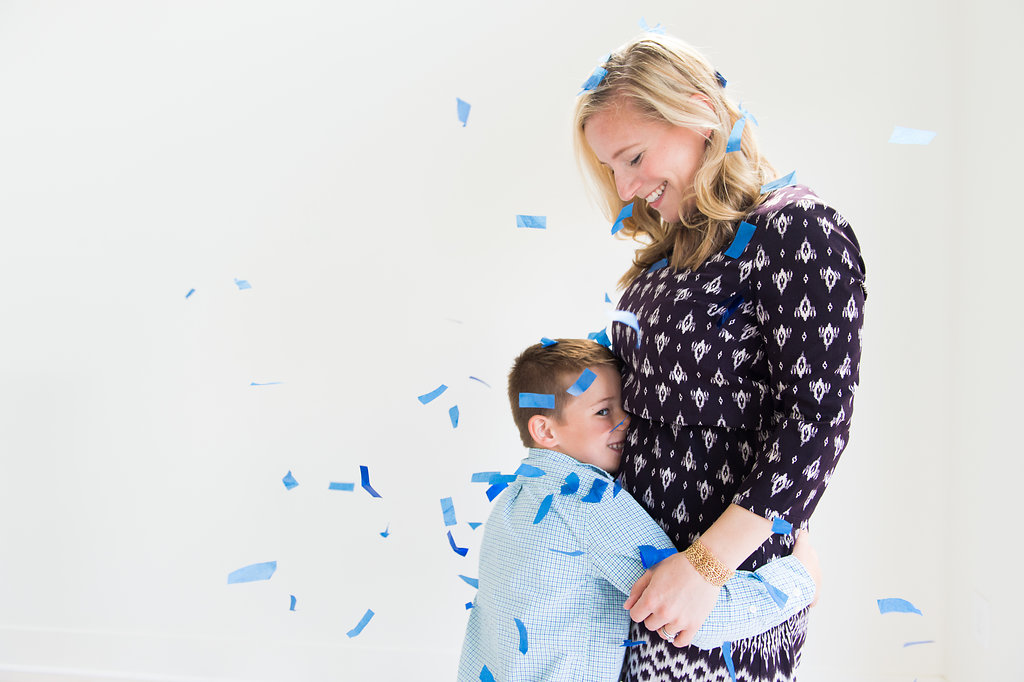 I love to surprise my mom, so we had several phone calls during the first trimester where we talked about *when* I would get pregnant again. Of course she didn’t know I already was! When we got to Bald Head we had a belated birthday present for her to open: a box with Easter Peeps (her favorite) and a dozen of our wedding napkins. 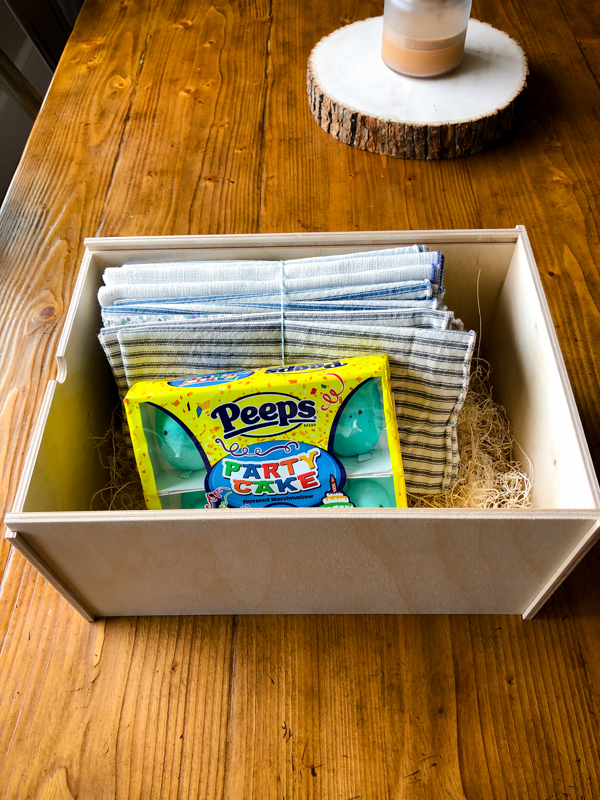 I had the ultrasound photo tucked in between them so when she lifted out the Peeps she saw it and jumped a mile into the air! 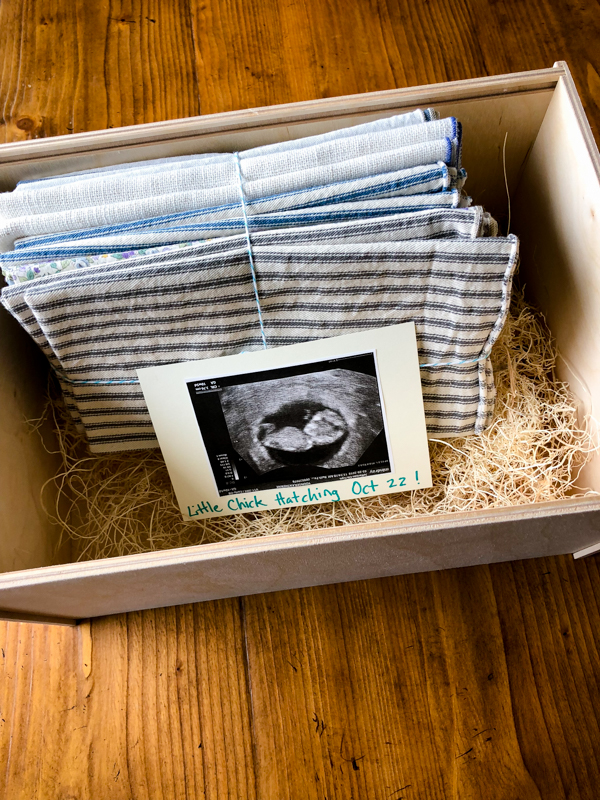 BUT the surprise was a little spoiled by – you guessed it – Mazen! When we got to the island I reminded him “DON’T TELL GRAMMIE ABOUT THE BABY!” He went with Grammie and Pea in the golf cart while Thomas and I took the tram with our luggage. My parents said that within a minute of their departure he turned to Pea and said (with Grammie just out of ear shot) “Pea, we have a surprise and we CAN’T TELL GRAMMIE! Mommy is having a baby and it’s coming out in October!” My mom overheard the October part and had a suspicion. But she said she was still plenty surprised to see the ultrasound picture! Sweet Mazen didn’t realize the surprise was for Pea too!

I sent a similar package in the mail to my sister up in NYC, which she received on Easter night after coming home from a weekend trip. She was excited and said she had a feeling because I had been less chatty than usual on voxer. 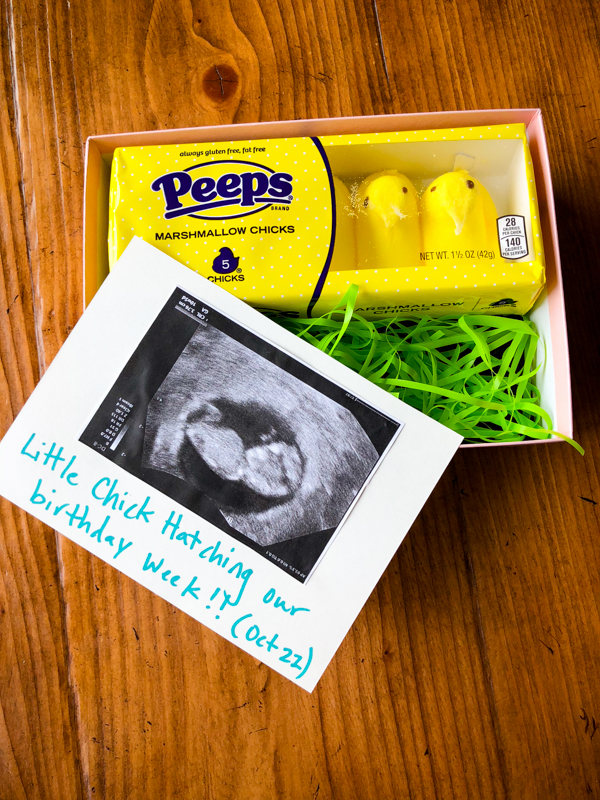 And now everyone knows! I’m sure some of you guessed, as I have already had friends text me asking because there are whispers in the wind. I’m so relieved that I can blog authentically again, as I always hate hiding anything from you guys. 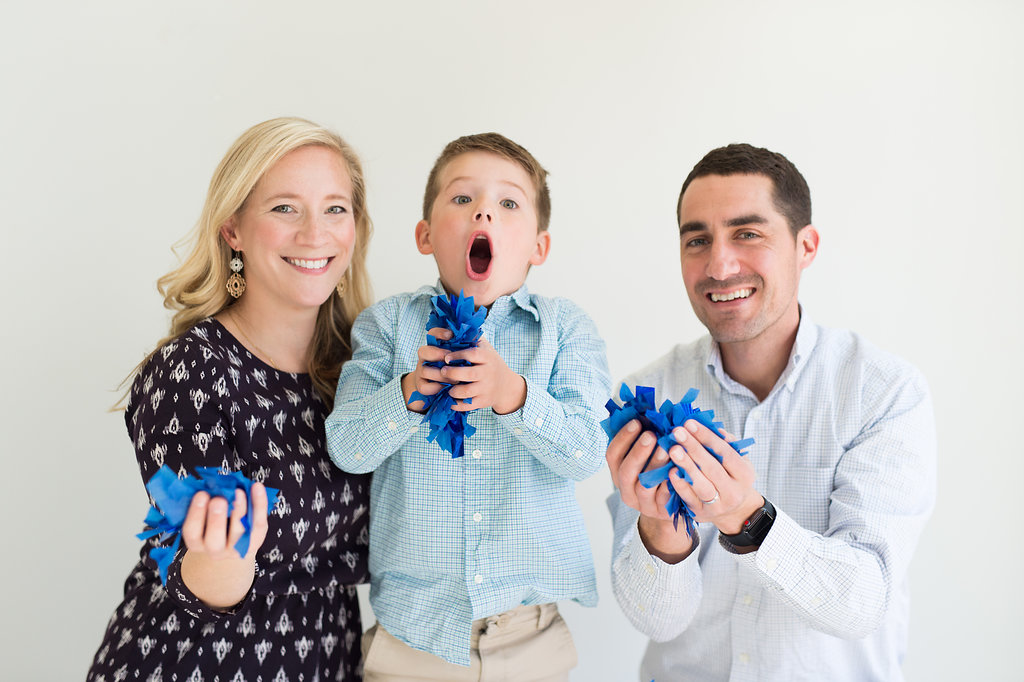 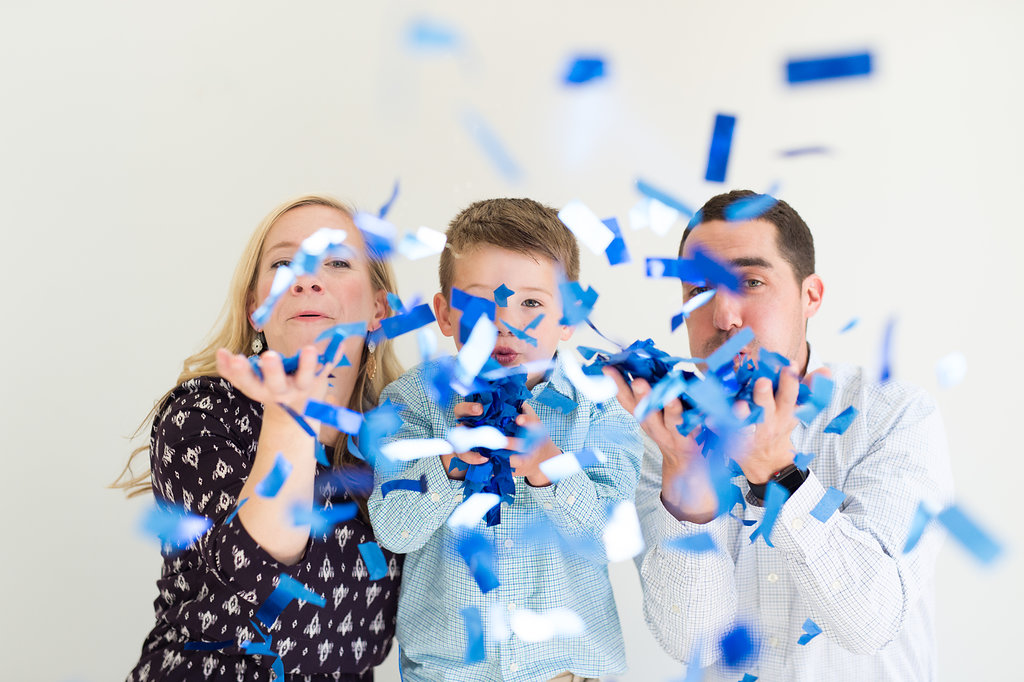 I guess the last question I’ve been pondering is whether or not to bring Baby KERF out from hibernation or write about everything here. I didn’t take detailed notes like I did with Mazen, and I also don’t intend to do daily pregnancy writing like I did last time, so I think I’ve decided to let BERF be and just write updates here on KERF as they arise. I’ll probably just stick to a first trimester recap and maybe monthly recaps, also writing about topics as they come up. KERF is much more about life than it was 6 years ago when I was journaling every meal, so it doesn’t feel as weird to me to write about pregnancy over here now. I love having BERF to look back on because I wrote in such detail with Mazen, but poor second babies never get that kind of attention. : ) I might update BERF with some photos or posts along the way, but that will be more for future reference than news since I’ll share them here first. Since this post was a million words long, clearly I do still have a lot to say! 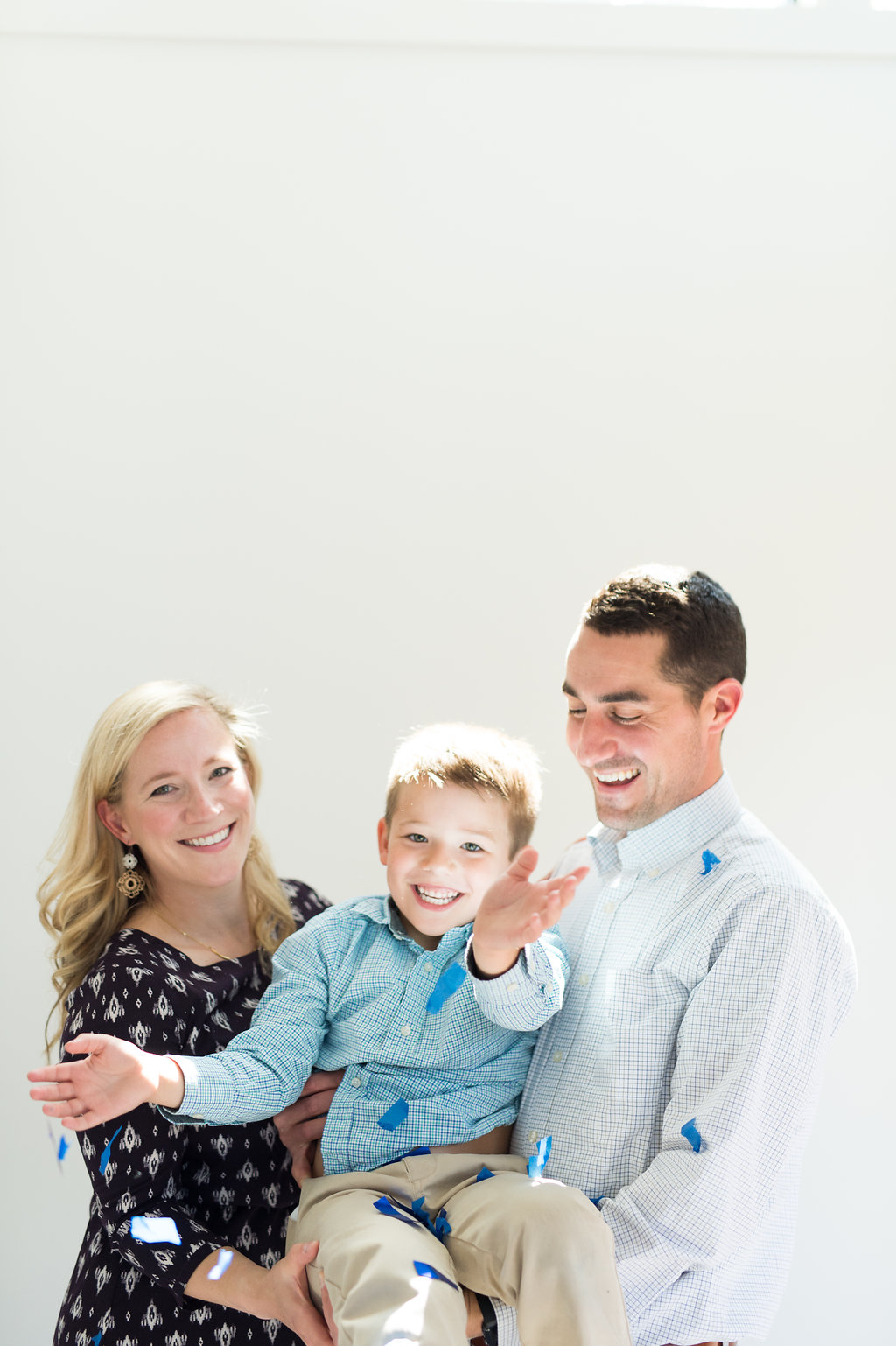 Did I miss anything?!