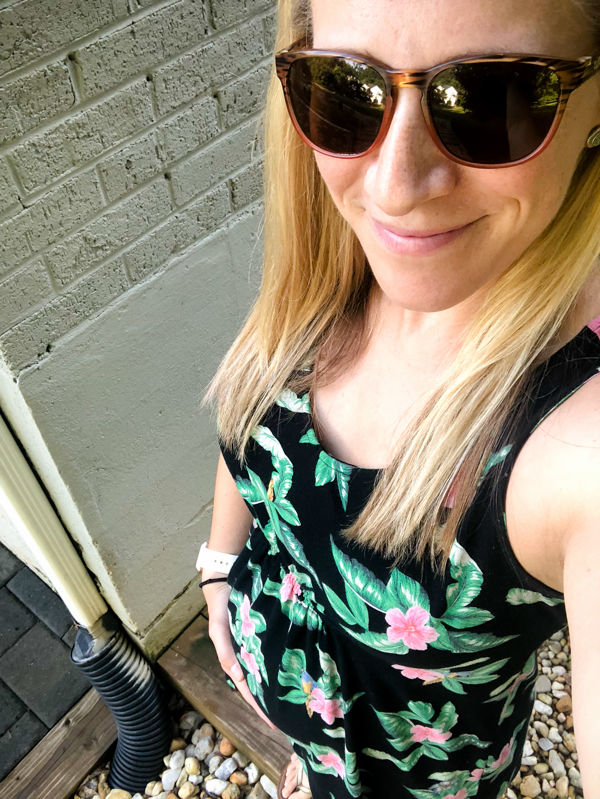 My brain thinks in terms of pregnancy weeks, but I realized recently that I have crossed the six-month mark! I’m 25 weeks this week (so close to 26!). I haven’t done much to prepare for baby’s arrival since my Nesting post. It’s time to get on that I suppose! Luckily we don’t need to do too much to get ready for a newborn. The nursery needs a lot of updates, but there is no rush on those since he’ll be in our room for a while. But I’d still like to have the nursery ready for downstairs diaper changes and storage of toys and things sooner rather than later.

Flashing back to 22 weeks 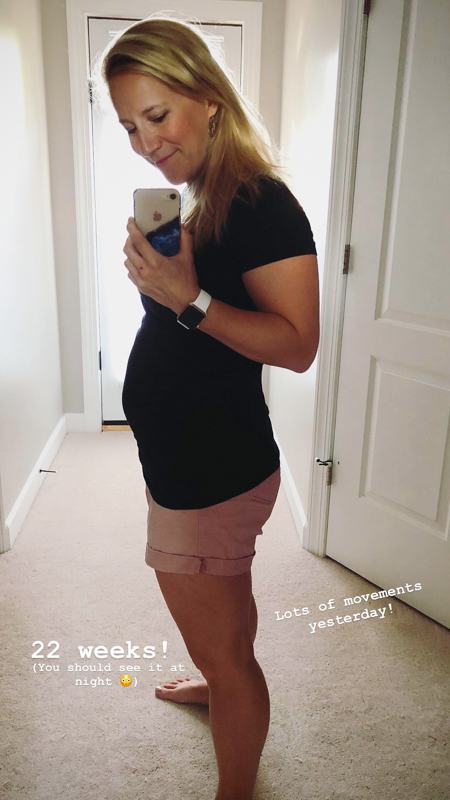 I keep a running list of things to mention in these check in posts, and when I sit down to write them I often find myself going to Baby KERF to see what I wrote last time. Nearly every time I laugh out loud at how similar my comments are.

In my Halfway post I wrote: “I’m turning ‘pregnant on the sides,’ meaning I can feel my uterus on the sides and I’m feeling more three dimensional instead of one flat plane.”

And in my 23 Weeks post with Mazen I wrote: “I’ve noticed on walks and things that I’m starting to get sides to my bump and it’s hard – abs at work! Some days the top layer is more jiggle-prone, but other times it’s firm and hard. It’s like my abs are in 3D now!”

I really have no recollection of what my symptoms were around now with Mazen, but I laughed again when my notes for week 23 said “nosebleeds and back pain persist” and in my post with Mazen I wrote: “I’m still having a handful of symptoms: nosebleeds and lower back pain being the worst two.”

My SI joint is actually WAY better (thank you, chiropractor). In fact, I haven’t even thought about it at all in the past two weeks. I’m actually thinking that it was my high-impact workouts that was bothering it more than anything. Instead, I had aching glutes for a week or two. I would wake up feeling like my glutes lifted 100 pounds all night – they were just soooo tired. But I think I figured out what the cause of that was: the pillow between my legs! When I used a super thin pillow at the beach my aches when away. My thicker pillow at home must have been keeping my legs too far apart to totally relax. I’ve also tried sleeping on my stomach on the Snoogle since we last spoke, and that was fun for a bit, but I’m finding that this week just having the minimum pillow and otherwise halfway sleeping on my stomach (with a leg propped to the side to allow room for baby) is working best in the moment.

I’ve also noticed (as I did around this time with Mazen) that my boobs are getting ready and have some colostrum already! This was quite shocking. The body is so smart.

Other than those minor symptoms, I’m feeling really good. Perhaps the best I’ve felt through this pregnancy so far. Appetite is good, energy is good, sleeping is decent. I’m feeling very thankful so far. (knock on wood.) 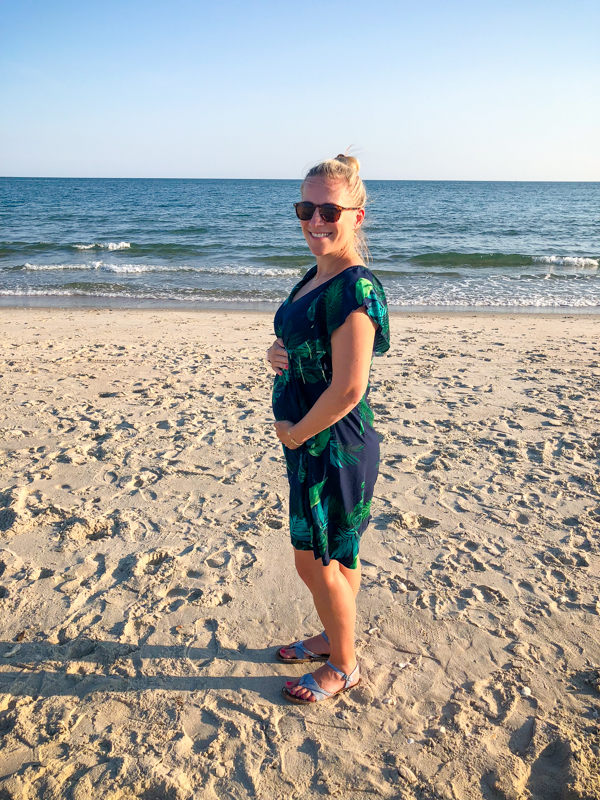 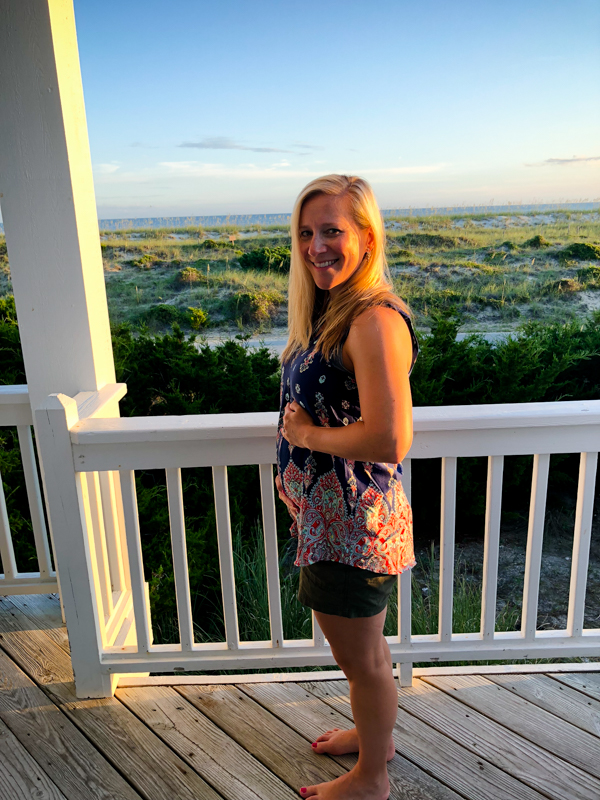 I’ve been able to keep up with my workouts. Each week I do some combination of the following: 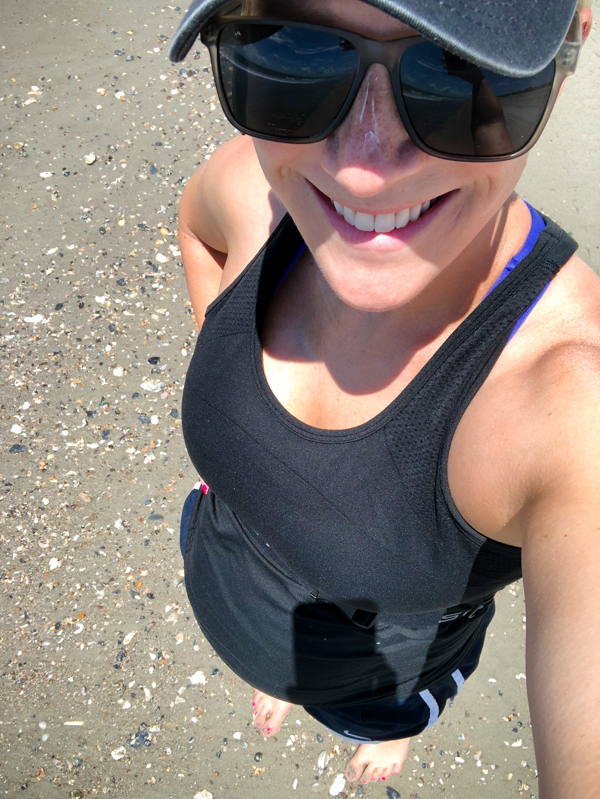 I felt a pickup of movements at 20 and 22 weeks. Around 22 weeks I started feeling the kicks in the front for the first time. So far, they are still like popcorn or fireworks and aren’t the breath-taking rolls that happen later on. I’m loving them so much! Thomas has felt a few, and they have gotten stronger and stronger of the past 2 weeks. I feel him move roughly once an hour or so. It’s so funny how used to it I am now. 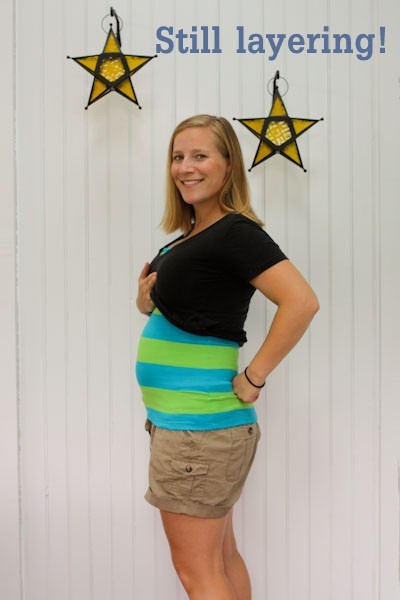 24 weeks at the beach! I might be slightly rounder this time? Or it could just be the way I’m standing. 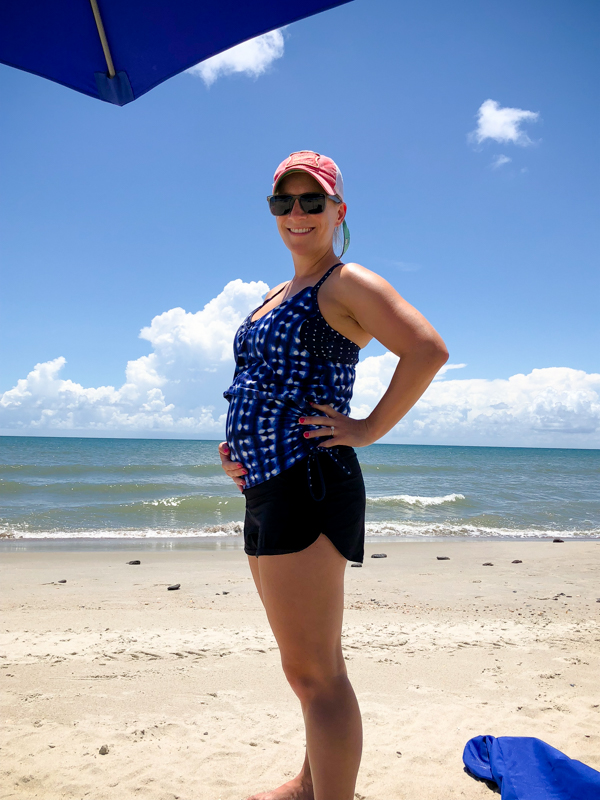 I walked into Mazen’s room the other night and Thomas commented: “I think you grew three weeks’ worth overnight.” So much of how I look depends on my posture, and at night after dinner I tend to relax it all out. I can still suck it all pretty far back in though, so some days I feel much less pregnant than others. I think I definitely had a growth spurt while I was at the beach. I was talking to a friend at the pool and saying, “I still don’t feel like I look pregnant” and she said, “You definitely do!” and when I caught an accidental glimpse in a mirror later she was totally right – I looked huge! Also: when I see photos of me pre-pregnancy, I can’t believe how slim I looked. I think I’m just getting so used to my bump that I don’t really notice it as much! (Hilariously, I saw that I wrote the same thing in my 24 week post with Mazen!)

I’ve gained about 14 pounds since our wedding, and I’m using that as my starting point rather than my first doctors appointment because that’s the weight I’d eventually like to get back to. (I’ve gained 10-12ish from my first prenatal appt.)

I have also started to think about the actual birth more, and I’ll save all of those thoughts for another post.

We are all starting to talk to the baby more, as it’s all feeling more real and we want him to know our voices! He’s already a little fourth person in our house. Mazen will tell you we have 5 family members here: himself, me, T, the baby, and Gus. 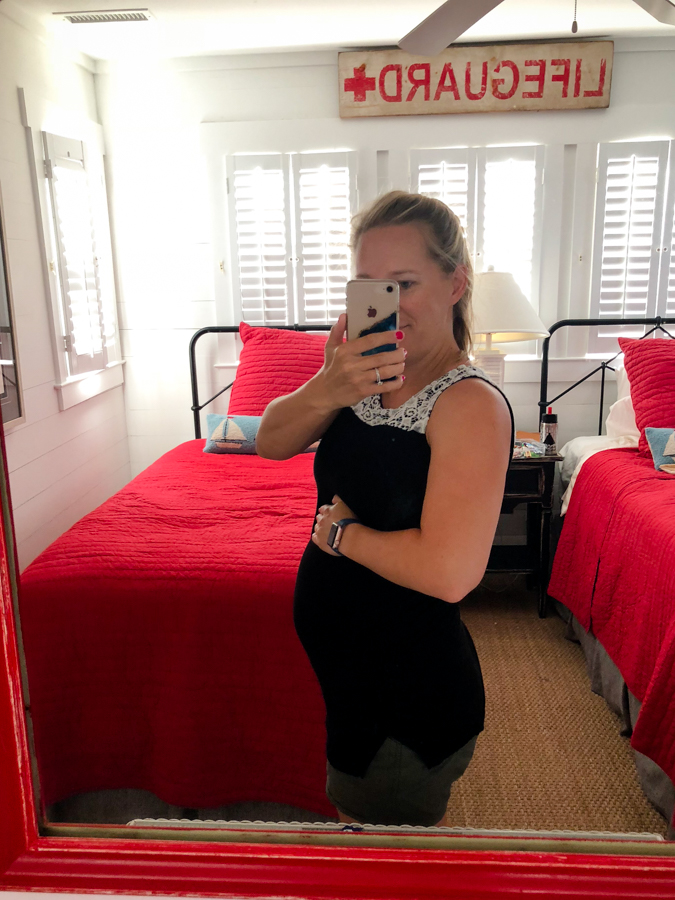