Happy 6th birthday to Mazen! He’s so big he can pick me up and hold me like a baby in pool water. I can’t believe he was once only 8 pounds and kicking me from the inside! 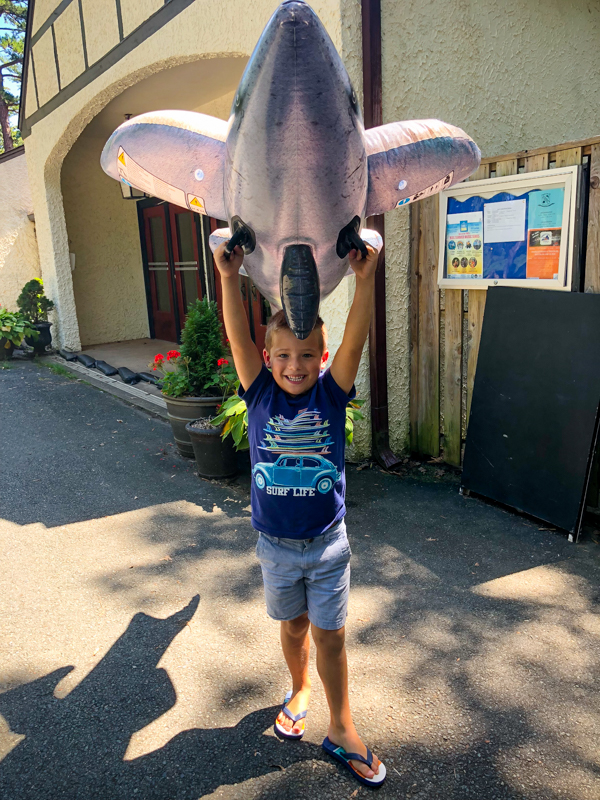 Summer is lingering hard here in Cville, and we’ve had a super hot and steamy week. We spent some time on Sunday floating around in the pool with our giant shark, and on Labor Day, we had a lazy breakfast and then went to ACAC for a special strength workout class. Afterwards they had Great Harvest sandwiches on the rooftop!

Later that afternoon (after literally chilling in the basement), we went to Lynsie’s for a get together. Mazen and Sylvia disappeared, and I found them around the corner on the deck “having a date” with cans of seltzer, a plate of apps, and Mazen’s Georgie Dog as their pet. LOL! 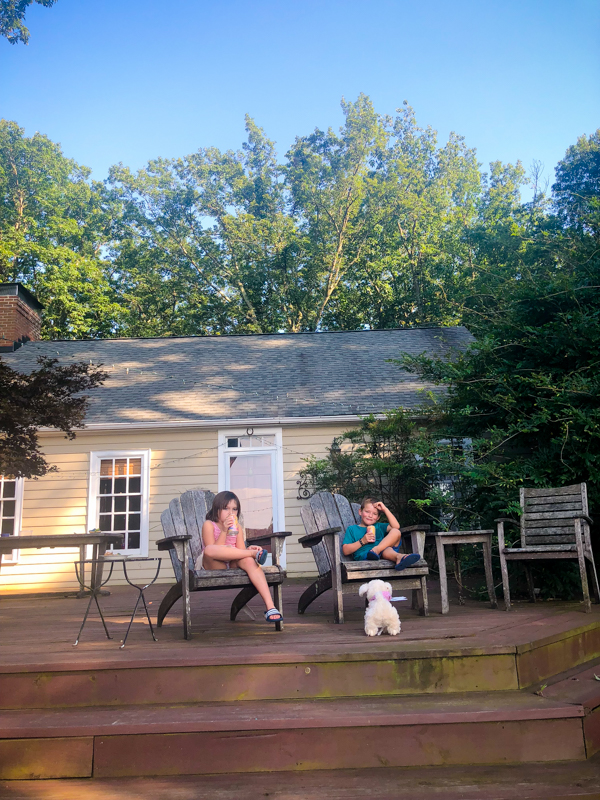 With an effort to cut back on screen time and with our neighbors out of town, Mazen decided he wanted to wrap gifts for an activity. So I gave him a roll of paper, some tape, and some kid-safe scissors and he spent about an hour wrapping three gifts from my home gift shop. Now they are ready to go to the next birthday party! Creative play FTW. 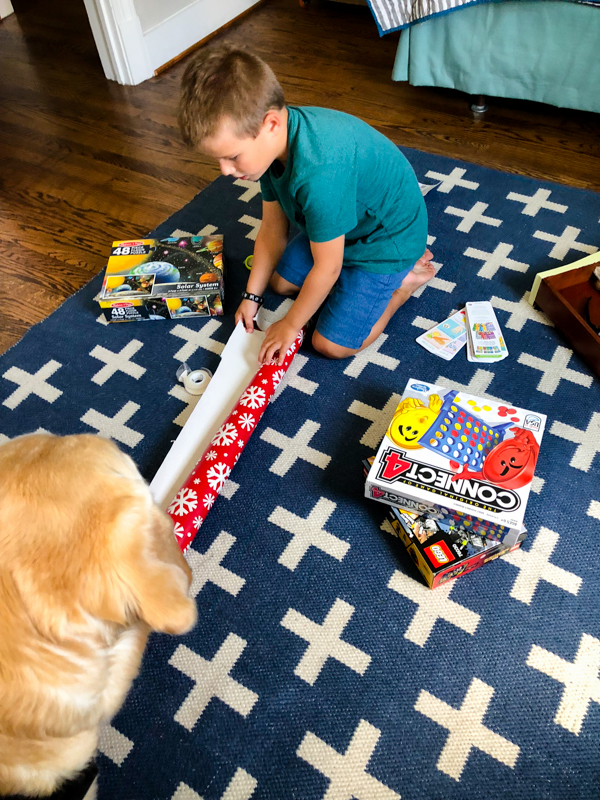 In the meantime, I’ve been nesting like crazy. I polished silver and cleaned out our silverware drawer, which was full of crumbs and overflowing with flatware. I stored some of the silver pieces away and just kept our everyday flatware in the drawer. This silver dip I used is AMAZING! Melts tarnish right off. (Note my serious face in the knife! 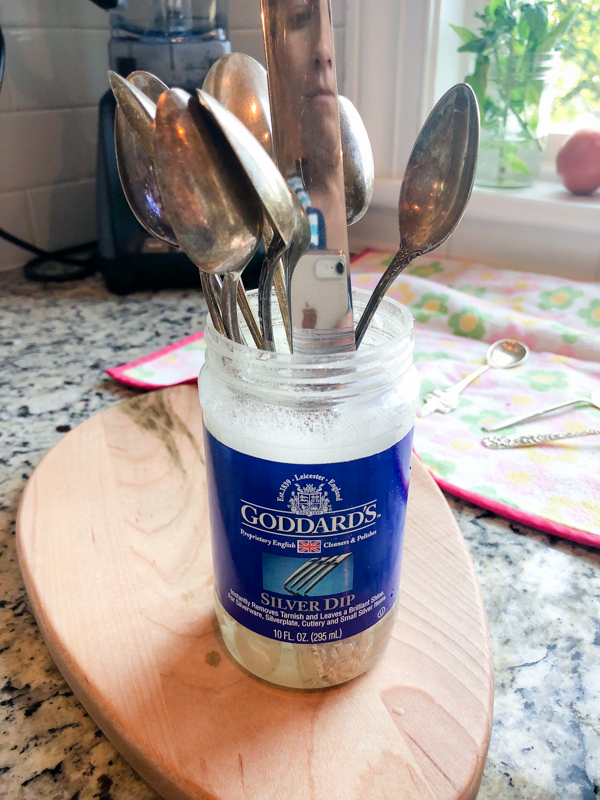 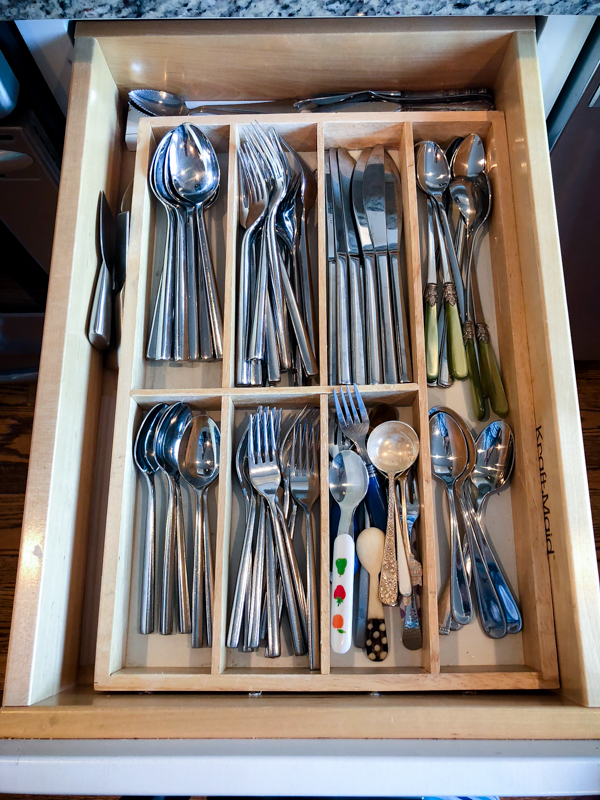 I was about to buy a caddy to store my gold flatware until I realized I had all the pieces to make nearly an identical one myself! Three jars and a wooden box later, I had what I needed. 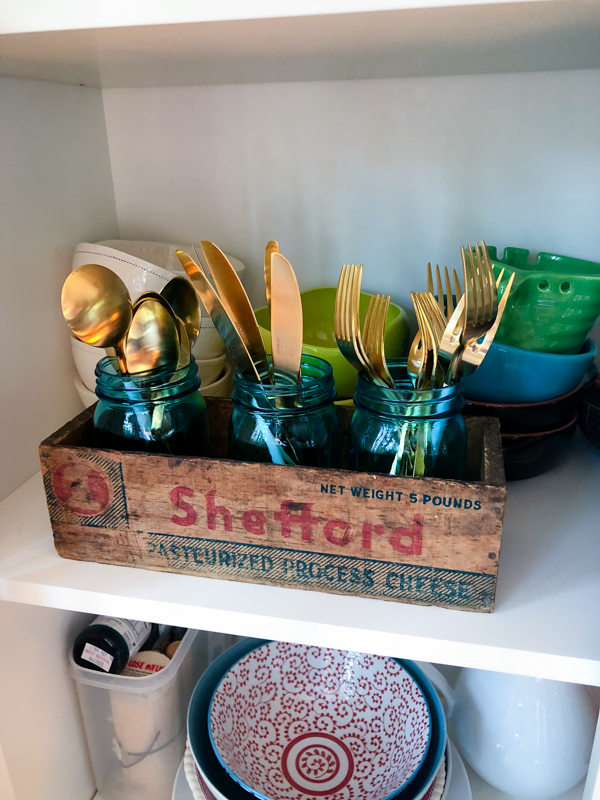 We’ve been eating a lot of smoothies for breakfast because they’re so quick and easy to do before school. Vega Chocolate protein powder + frozen banana + milk + peanut butter is the combo of the week! Look at that milkshake texture: 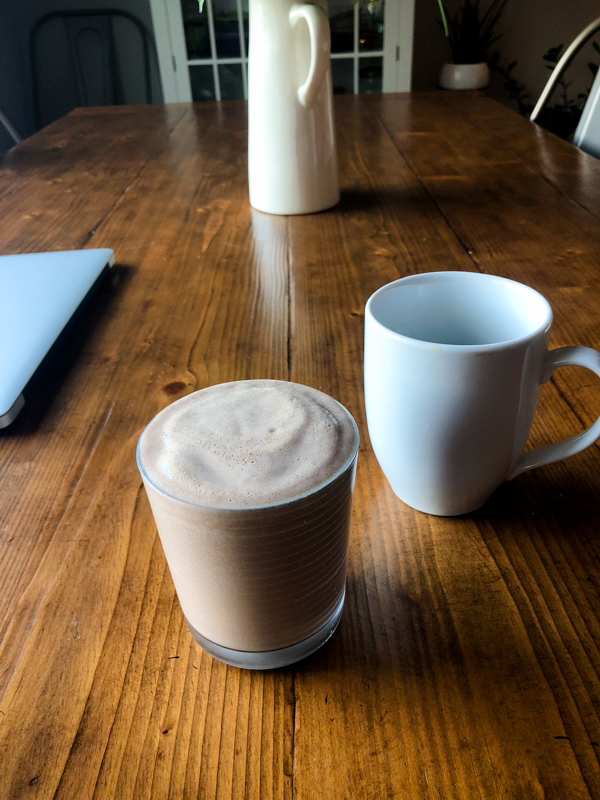 I often make an extra large batch of smoothie and then save the leftovers for Mazen the next day in a straw cup. (This is our favorite kid smoothie cup.) I just give it a good shake and everything mixes back together. While he had smoothie day #2, I made french toast with cinnamon chip after the bus left for school. 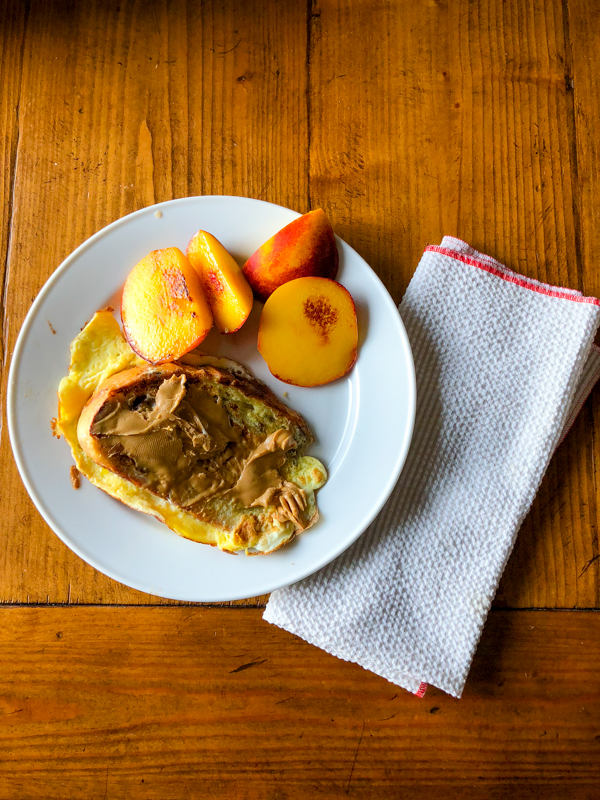 Lunches have been leftovers – my pasta from date night with caprese salad on Tuesday. Gazpacho, lentil salad, and chicken over a salad the rest of the week. 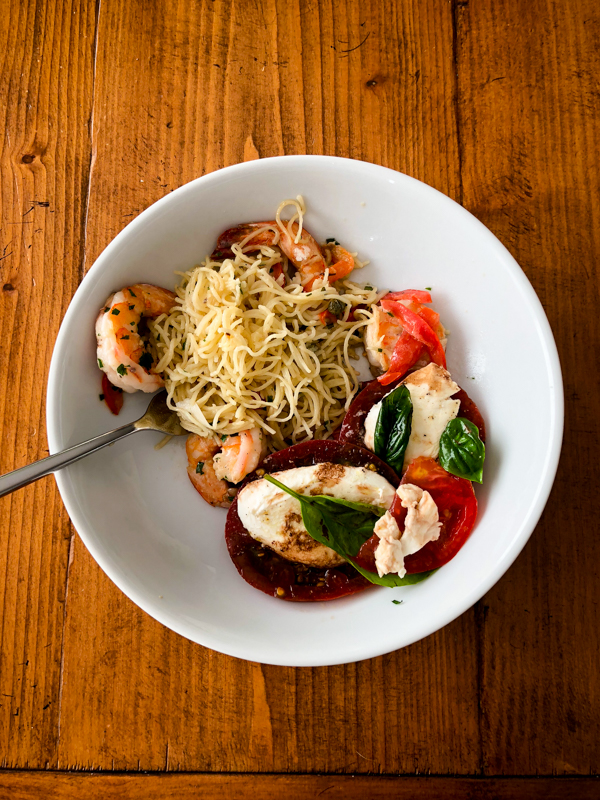 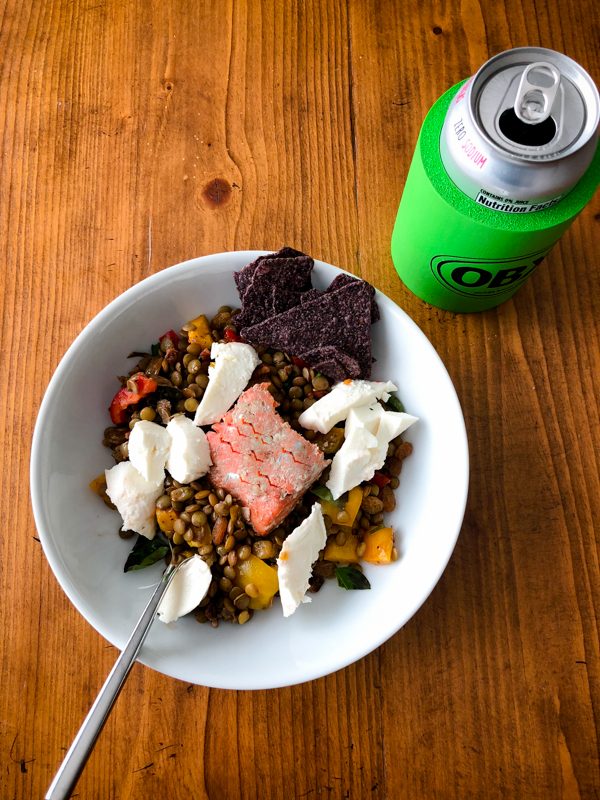 Grilled salmon with chili cheese grits and caprese for dinner. 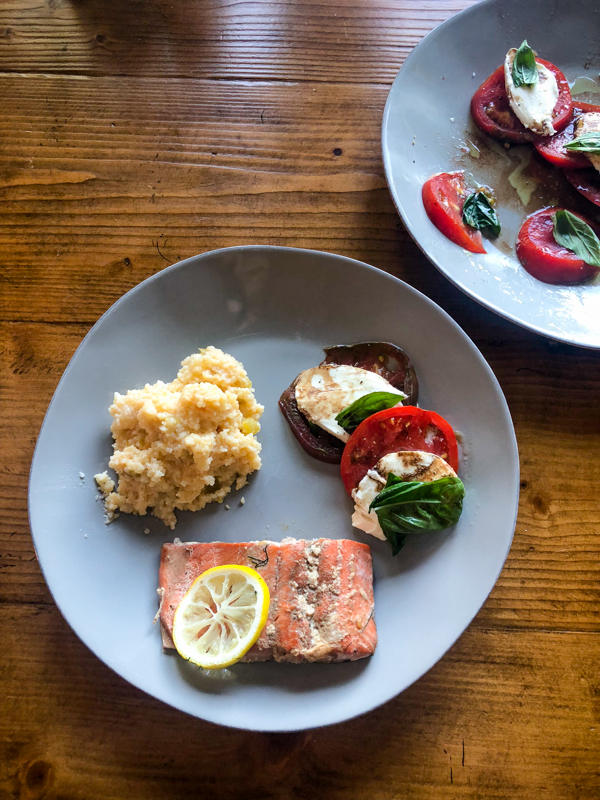 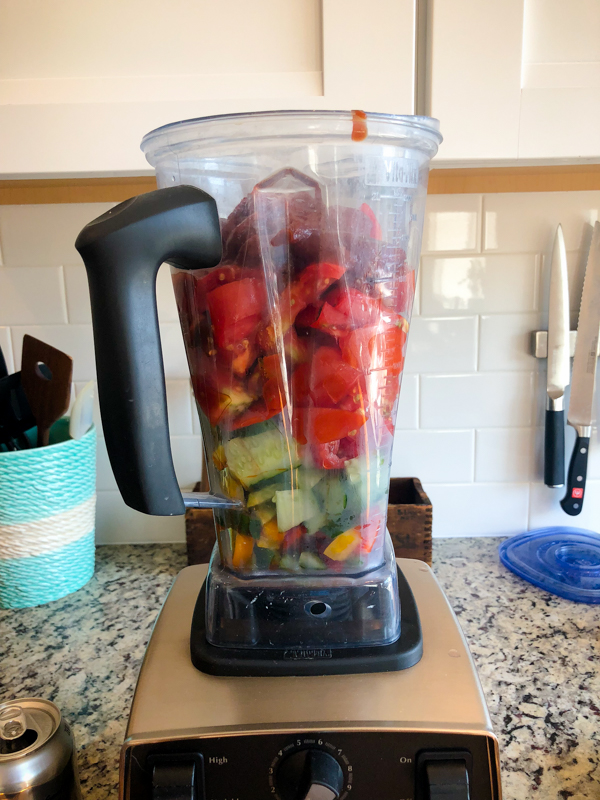 I used my old KERF recipe and mindlessly added a WHOLE FREAKING CAN of adobo chilis. (Pregnancy brain has been real lately.) It was so spicy Thomas and I couldn’t finish it! We even added some cream and milk and more tomatoes to try to dilute it, but there was no hiding the spice. I was a little worried about the baby getting some of this taste somehow or putting myself into preterm labor – it was that spicy. This is a mistake I will not make again. 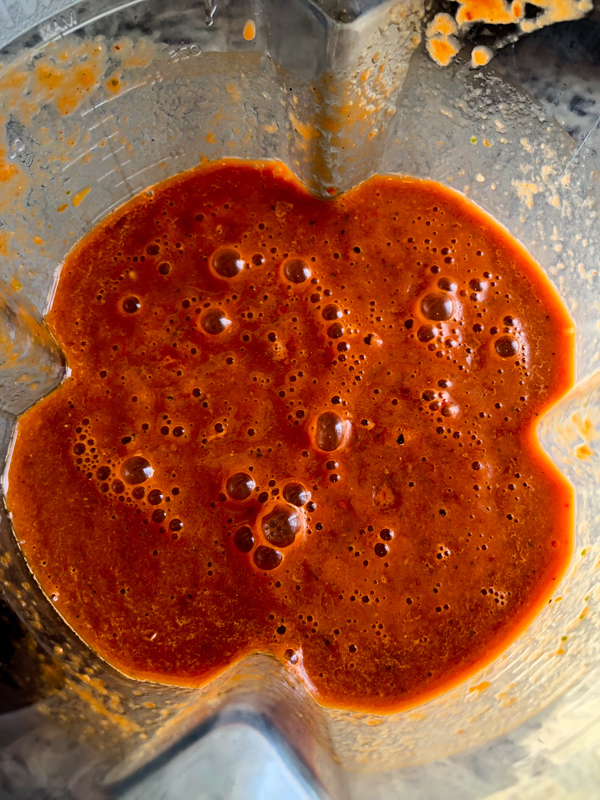 Rosemary bread on the side. 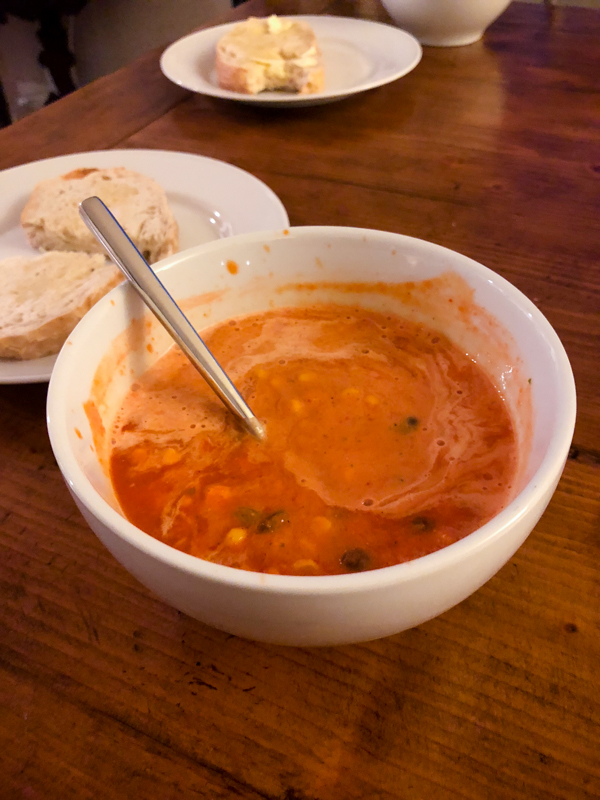 Meal planning is going well, and we made Ayesha Curry’s Harissa-Spiced Chicken. I prepped it the same day I made the gazpacho so it was ready for baking on Wednesday late afternoon with some green beans and leftover grits. I’m going to share the tweaks I’ve made to my meal planning system and recipe collecting in a month or so. But thus far, a little effort has gone a long way (as it always does.) 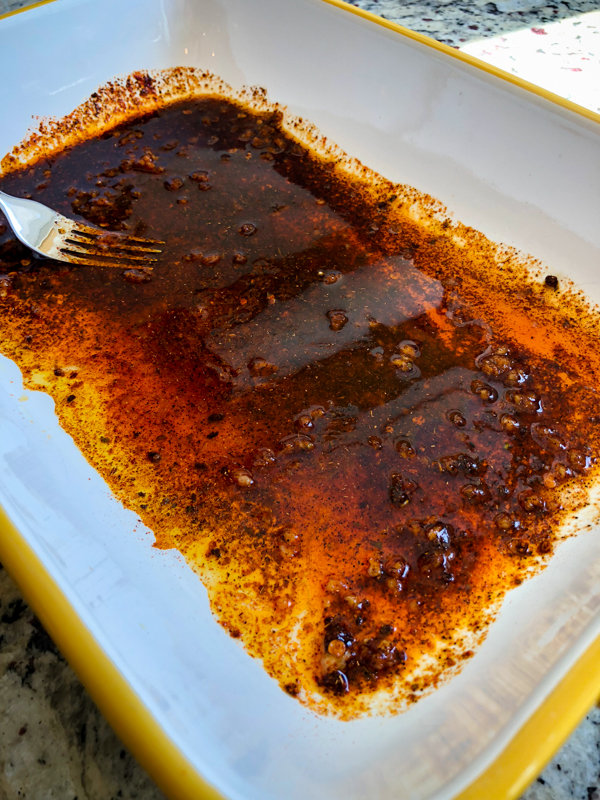 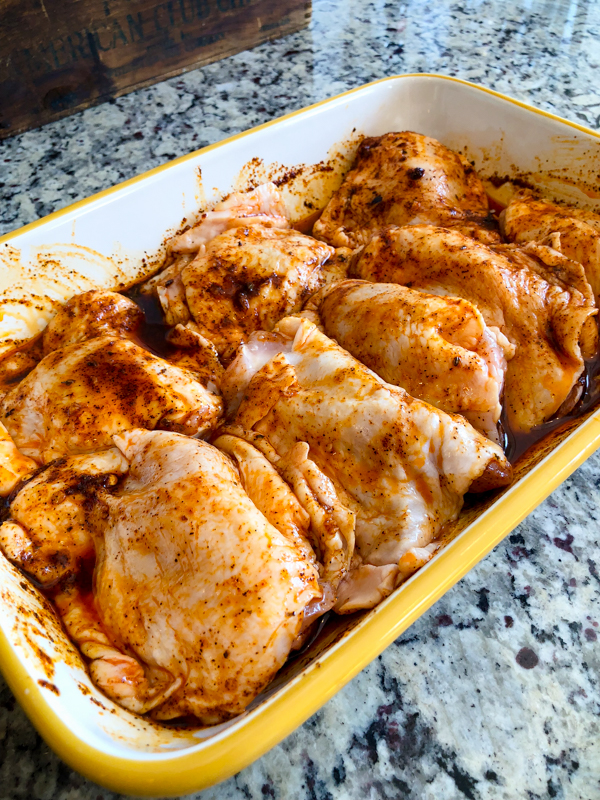 This recipe was so easy and delicious that it’s going in my re-make category right away! 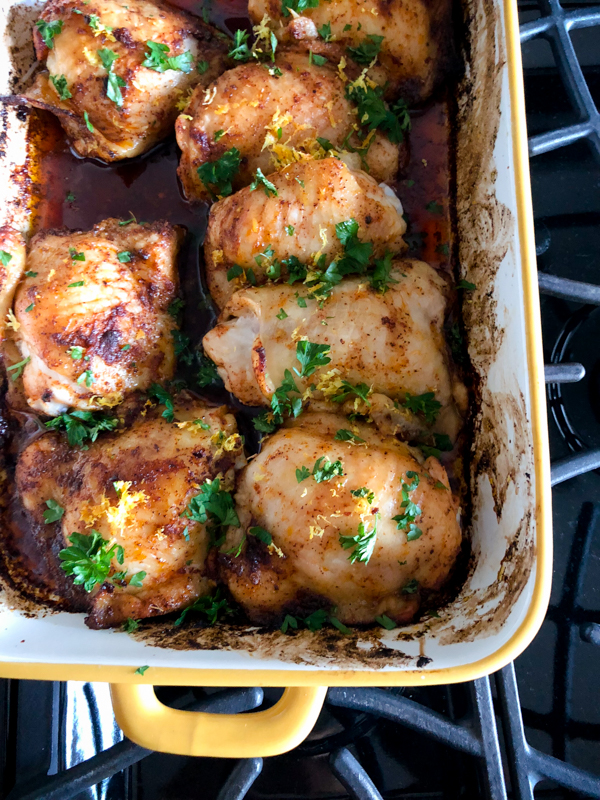 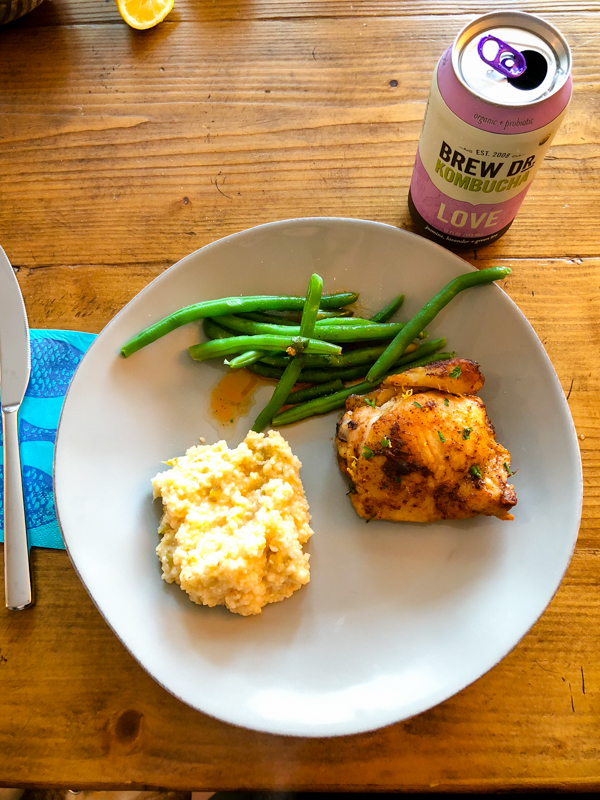 I made this lentil salad with some lentils I found cleaning out the pantry. I added some bell pepper, raisins, balsamic dressing, and herbs from the garden to turn them into a little lunch salad to use up this week. 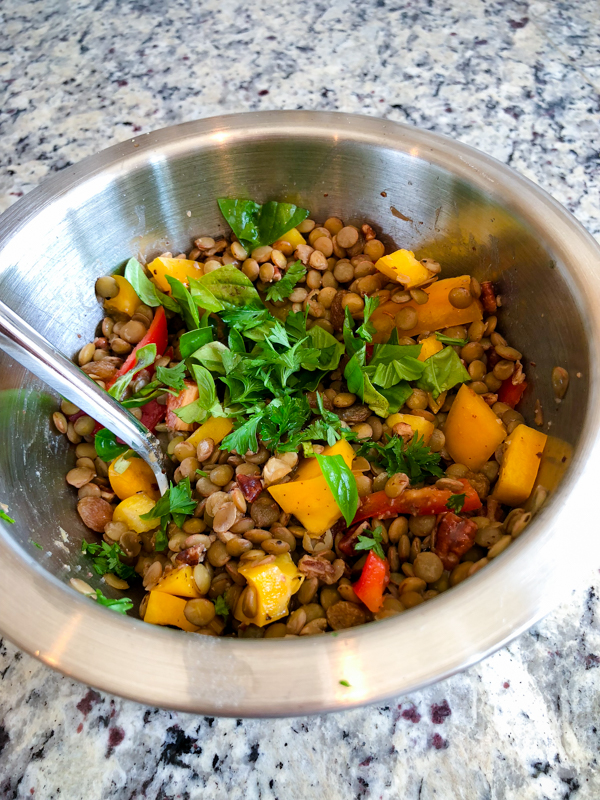 #50shadesofblue. I ordered this king sham to coordinate with my new MagicLinen duvet cover. It matches better with the shades of blue than the multi-colored floral one, which I’ll save for winter when we put our thicker duvet cover on. I had a gift card to West Elm and used their Buy More Save More sale to score this for just $8! MagicLinen also offered to share a discount code with you guys for 10% off anything on their site: KATHEATS10. 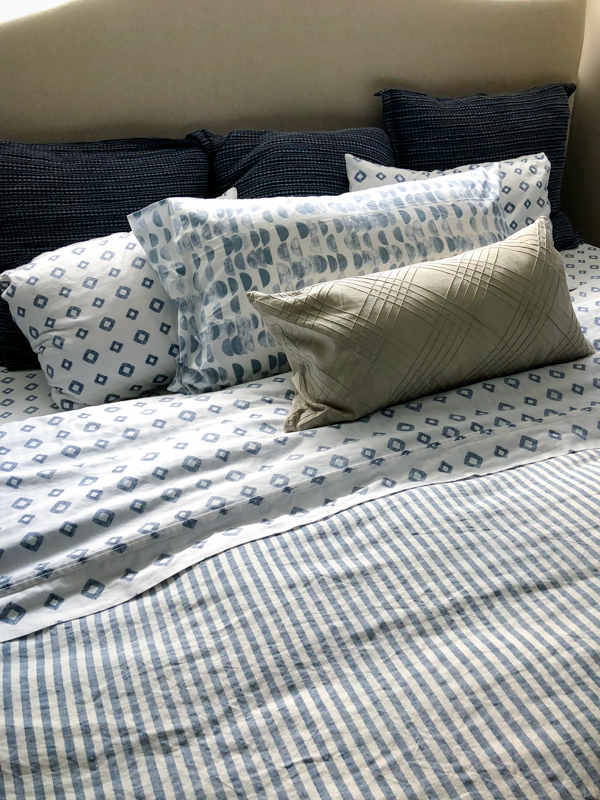 In other bedding news, our crib is back!! (I had loaned it to a friend for the past two years-ish.) The nursery is getting close to being done. 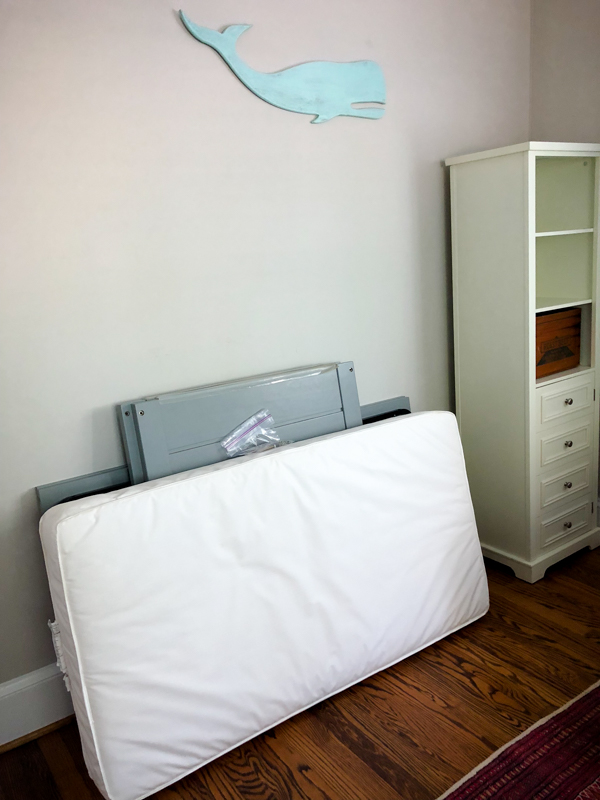