You are here: Home / Lifestyle / What’s In Our Beer Fridge?

Many of you requested to see what’s in the beer fridge, so here is a peek inside from Matt!

As mentioned, our wine purchases aren’t made with the intention of lengthy aging, but we take a different approach with beer.  While I’m always going to have a few 12oz bottles of easy drinking stuff in the 5-7% alcohol range, I also have some stronger beers hanging in the back.  These beers aren’t purchased specifically for aging, but they’re special enough that it usually takes 6-12 months to find the right occasion to drink them.  Usually I’m just waiting for the right person to come visit, so come on over! 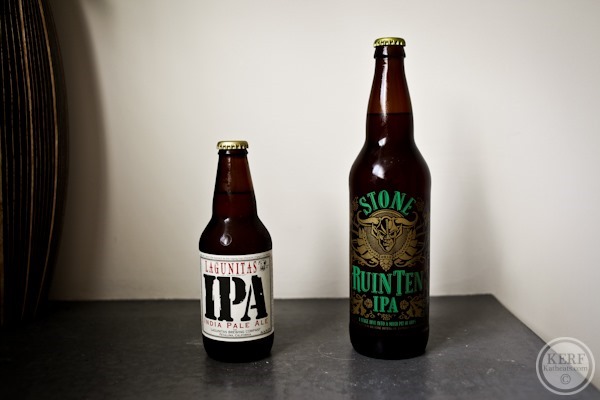 First let’s check out the hoppy stuff. Lagunitas is my favorite brewery, and I usually have one of their beers in the fridge at all times. I love their attitude, labels, and most of all the hop-forward beers. Little Sumpin’ Sumpin’ is probably my favorite, but I went back to an old classic when I bought this IPA.

You could certainly lump me in the hophead category of beer lovers so I’m likely to always have a double IPA on hand. Stone’s Ruin Ten is fantastic. Hop flavor and bitterness age out of beer very quickly so don’t keep these around too long!

The Dogfish 61 is a really unique beer, which shouldn’t be a surprise from this brewery. It’s an IPA that is also fermented with Syrah grape must (“must” is the name for unfermented grape juice). So much of the wine character comes through – there’s this sophisticated fruitiness that you rarely experience in beer. To enjoy this one you’ll still need to be able to appreciate a bitter beer.

On the right is the coveted 120 Minute IPA – I guess you’d say it’s a Double IPA but at 18% ABV and a note that says “Ages Well” you might think of it as a barleywine instead. When young this is insanely hoppy and bitter, with a nice sweetness from the malt and alcohol. As I mentioned above, the hops and bitterness will fall out over time, though I’ve had a 2.5 year-old one of these and it was still intense. I bought these at some point in 2012 and I’m not sure when I’ll want to drink them. 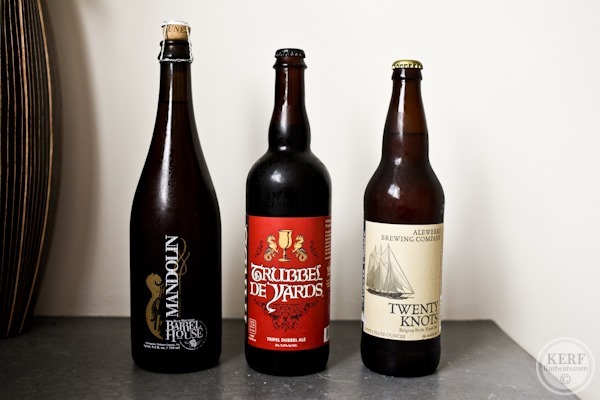 Now we’re getting into the higher ABV beers, but the ones you see above are actually intended to be pretty refreshing.  They’re all Belgian-inspired, and if Belgian beer is one thing, it is intended to be drinkable.  Belgian food can be fairly heavy so the beers are made to balance the palate.  Mandolin is from our favorite local brewery, Blue Mountain. I feel like most high-alcohol beers have the stigma that they should be consumed only in cold weather, but this beer still manages to be drinkable at 9% ABV because it manages to be fruity and rich with a dry finish. That dryness on the palate is what makes you feel like you’re not eating your thick, rich, filling beer.

I picked up the Trubbel de Yards directly from Yards Brewing Co when I visited Philadelphia for the National Homebrewers’ Conference.  I haven’t had it yet so I’m excited to try it!  The name indicates the beer is supposed to blend the fruitiness of a Dubbel with the piquant spiciness of a Tripel.

We got the Alewerks Twenty Knots on our Williamsburg trip – no idea what it tastes like but I’ve been so impressed by every one of their beers that I have high expectations. 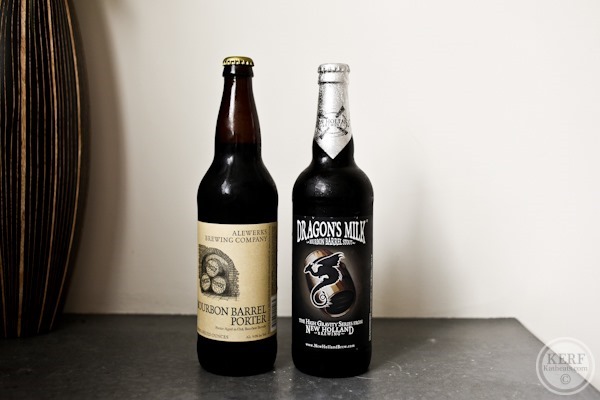 … but I have had the Alewerks Bourbon Barrel Porter and it’s fantastic.  It’s easy to overdo the bourbon-beer style but this is a great example of success. The best bourbon barrel brews should have a nice bourbon nose – just so you know it’s in there – but you don’t want to be hit with a boozy blast when you take a sip. Malty and sweeter styles are preferred because those flavors will balance with the tannic and harsher notes from the bourbon barrel. {Kath speaking: I don’t think you can overdo bourbon!!}

Dragon’s Milk is one of my Top 10 beers (and Kath’s too according to this post).  Rich, dark, and oaky.  You must buy this beer! 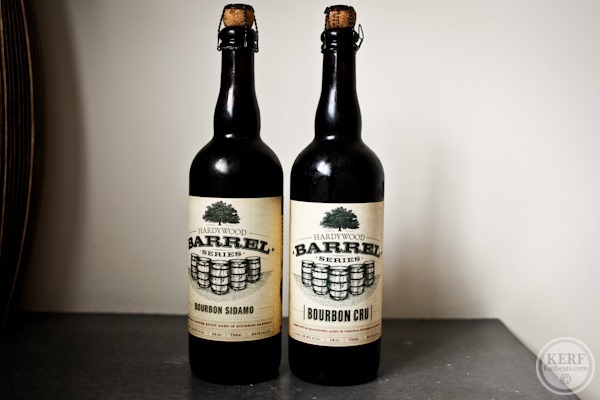 Speaking of bourbon, Isaac and Brittany gave us these exciting beers from a newer brewery in Richmond, and we’re looking forward to the winter. In the case of the Bourbon Cru I’m excited to see more breweries doing unique stuff with Belgian and Abbey styles (it’s a Quad aged in barrels). 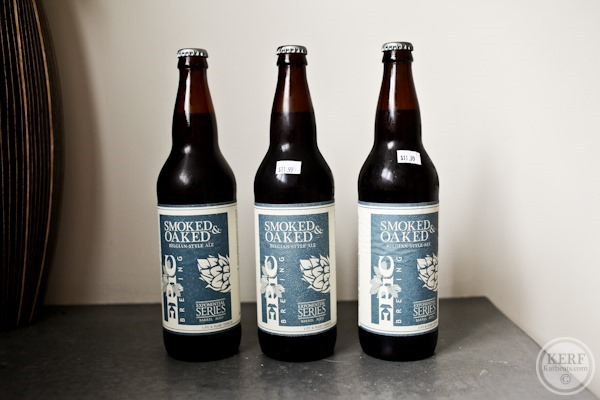 I first had this beer from Epic on a whim a couple years ago while shopping at Beer Run. I was so blown away that I’ve been searching for it ever since. Two years later I saw a bunch of bottles on the shelf so I picked up several. It’s such a complex beer because it has fruity and spicy notes from the Belgian yeast, plus a rich bacony-smoke, and some vanilla and body from the oak. Turns out that Epic has made multiple batches of this over time and each one can be quite different. One of these is 10.6% ABV and one is 12.5%!

You know we’re fans of the barleywines – I love how much a bottle can change over time, going from what sort of amounts to a Imperial Amber Ale loaded with hops and bitterness to a smooth and warming beer with flavors of toffee and treacle.  I used to collect Sierra Nevada’s Bigfoot barleywine from each year and do vertical tastings (see this post for an epic one!) and I got out of the habit. So I’m starting again with 2013. It’s a classic American barleywine.  I also picked up this special version that I believe is the 2012 version that Sierra Nevada aged in oak themselves and then released in this packaging. Can’t wait to try it! 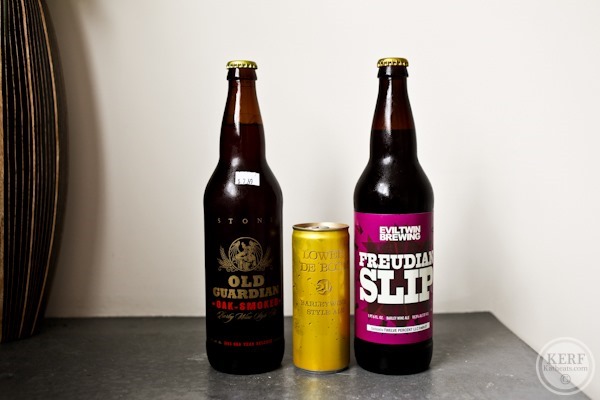 Here are a few unique beers.  We had the 2013 Stone Old Guardian barleywine a few months back, but I’ve been saving this smoked version since then.  I love smoked beers, and I think a barleywine is a great style to do it.  The can is from 21st Amendment and it’s an English-style barleywine which means it’s a little more floral in its hopping and goes even heavier on the dark caramel flavors.  How bout that for an energy drink!?  Freudian Slip was a gift from Larbs – thanks sis! 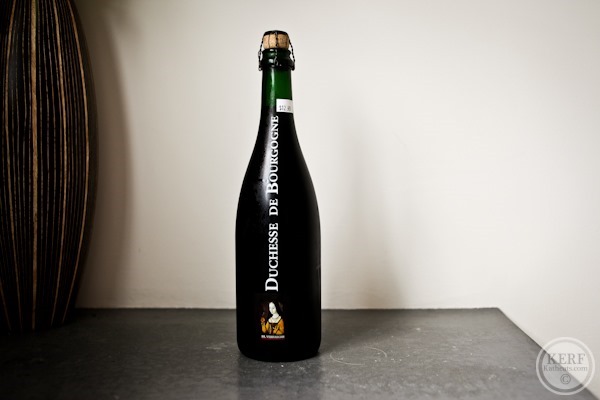 Anybody into sour beers?  Certainly they’re an acquired taste.  If you’re primarily a wine drinker who doesn’t like beers, give sour beers a try.  Similarly to wine, they’re very dry and have subtle and sophisticated fruity flavors.  Typically these are normally fermented beers that then have other special yeasts and bacteria introduced to further ferment the leftover sugars.  Some come across as bad vinegar, but some have a pleasing tang that complements the fruity malts.  The Duchesse is a good starter sour beer! 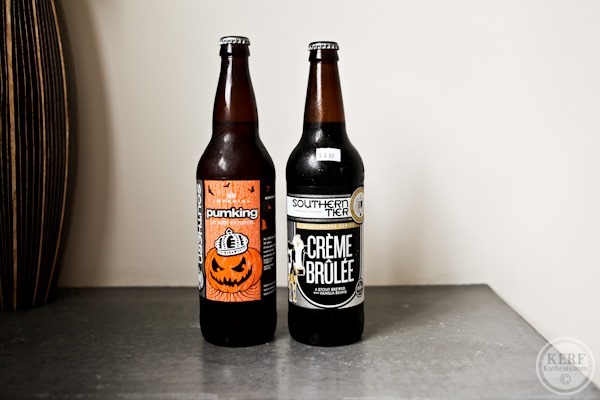 And finally, you know we have a few of these around – in fact, we still have half a case of Pumking still left from when we bought it last year!  I guess we’ll have to do a vertical tasting at some point?  Kath approves. 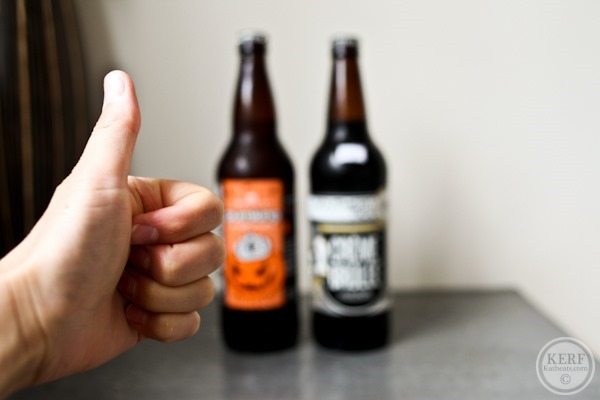 What is your all-time favorite beer?