You are here: Home / Lifestyle / Only 50 Minutes To Go

Until the weekend!! I just have to get through Organic tomorrow morning and I have 3 days to catch up on life.

Test #2 went better than Test #1 (I think?!) but this was the one that counted for 20% of my grade! It was supposed to cover material from Intro to Nutrition and the Food Comp class I took this summer, but it covered a whole lot more details of nutrition than I was expecting, including the trace minerals, which I have spent about 2 minutes on each thus far! The test was 100 questions and there were about 30 that I was unsure of on the first round. I’m hoping I got at least half of those right with educated guesses. But I’ve never felt so out of control of my grade.

Once home, I quickly did an assignme nt and had a snack before I left for the gym. I wasn’t terribly hungry, but I decided to have something so I wouldn’t come home famished. I started with 5 unphotographed Kashi crackers from the box 😳 And then had the last little bit of our Chobani tub with a few raspberries and chocolate granola from OHNuts.com 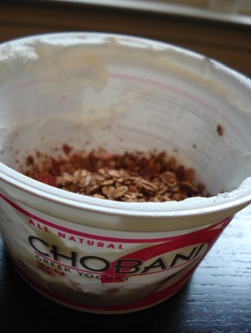 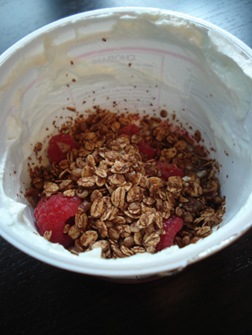 I was actually excited to go to the gym . The weather improved and I felt FREE after my tests to bike away. Once there I did 45 mins on the ET with Body + Soul (where the heck is my SHAPE this month!?!?!?) followed by some upper body lifting. Just a quick round of 2 sets of 15 on each muscle. Biked home.

Since I didn’t leave for the gym until 5:15 or so, we didn’t start dinner until around 7pm. I had a serendipitous creation in the kitchen for the mystery recipes and so I unfortunately can’t share what we switched dinner to. But I will say that it makes a great sandwich spread and involves bananas !!

I had some on a Rudi’s Wheat Bun from the freezer broiled with a slice of turkey and a slice of swiss cheese . 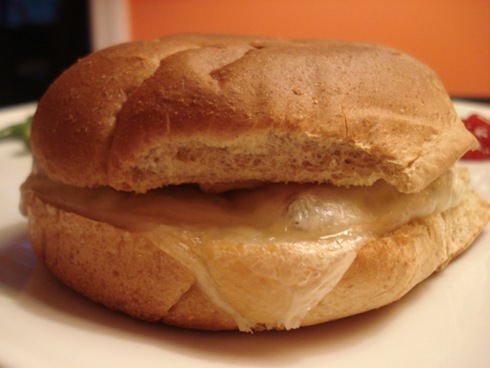 On the side we used up some CSA veggies: parsnips and green beans. They were cooked in just a little bit of drippings from the husband’s bacon (for his turkey sandwich). I added some ketchup on the side.

Since the dining room table is covered in my school work, we dined TV-side tonight with a little House Hunters. Here I am in my pajama pants! (Old Navy, last year). 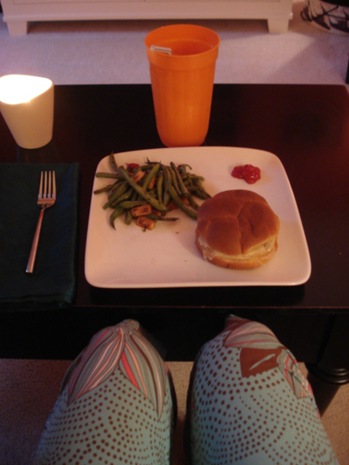 I was thrilled to finish another assignment for Foodservice : we are working on a huge hospital 9-day menu and the first part was to find 9 lacto-ovo recipes and enter them (in a VERY strict format!) into Excel. It was much harder than it sounded because each recipe had to have at least 1 egg and 1 oz of dairy per person. It’s hard to find egg recipes that have that many and aren’t all frittatas and omlets! But I finally finished. Next week we have to do a nutritional analysis of all 9 in a program at school and then I think we’ll be adding more types of diets (low-sodium maybe?) to the menu. I love menu planning, but having all these restrictions makes it really hard. 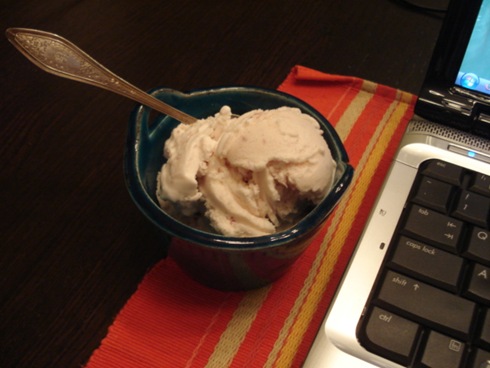 Race for the Cure update!!!

Big thanks goes out to:

If you’d still like to donate, here’s the link: TEAM KERF .

Many thanks to you all 🙂

BUT, tonight I showered at 7pm. I had plans to run early tomorrow morning before the day starts, but then I got to thinking. I only have a 50 minute class, and then I turn around and drive back home. Maybe I should just go in my workout clothes and run after class? So that’s the plan!! I think I’m going to just take a quick rinse-off shower when I get up, but I won’t wash my hair 😳 I might have to put on light make-up though. Just so I don’t look sickly!