You are here: Home / Weekend / Fare of the Earth! 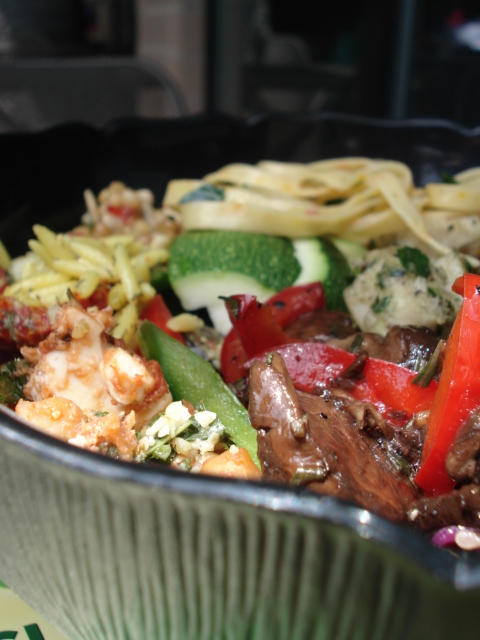 My salad was delicious as ever!!

But first, my take-home chem quiz took me a lot longer than expected and I wasn’t finished until 11:30! I debated putting off my workout until the afternoon, but I wasn’t really hungry for lunch and didn’t want to shower twice, so I went. Lesson learned from the day before, I had some quick energy in the form of a honey-laden KIND bar (half of one I’d eaten a while back) 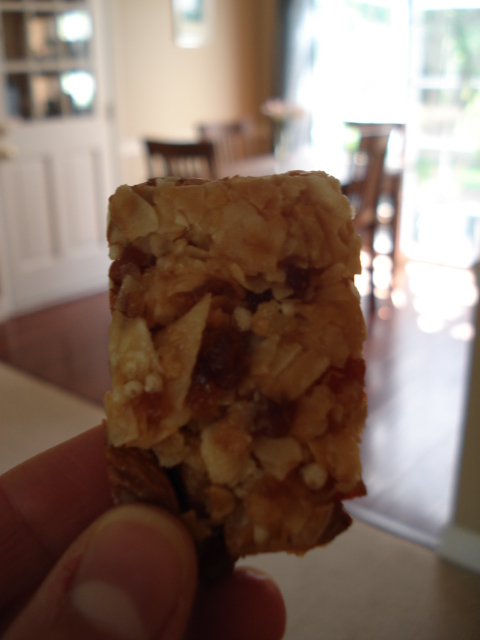 It worked!! I seemed to have lots of energy today and didn’t feel weak when I was done – at 12:45! I did 40 minutes on the Stairmaster and another 15 on the stat bike. My magazine (Women’s Health) was too good to stop!

After some stretching and a shower, I was off to EarthFare.

Here are some quick photos of the salad bar. I have only been in two Whole Foods, but I imagine the EarthFare salad bar is very similar.

One side is all raw veggies and a few fruits: 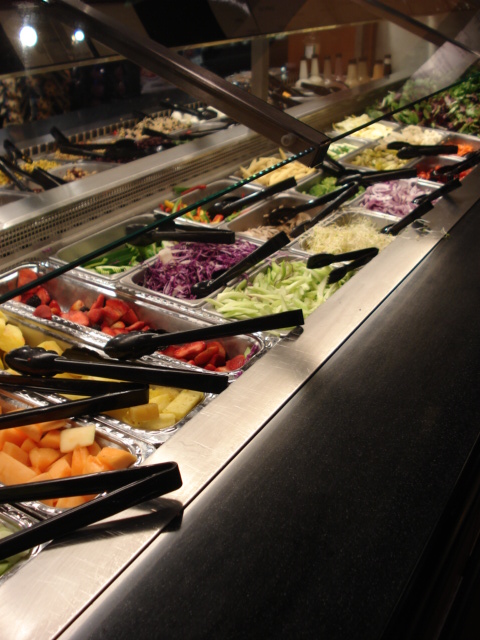 And the other is all “fun stuff” like wheatberry salad, beans salads, pasta salads, etc. 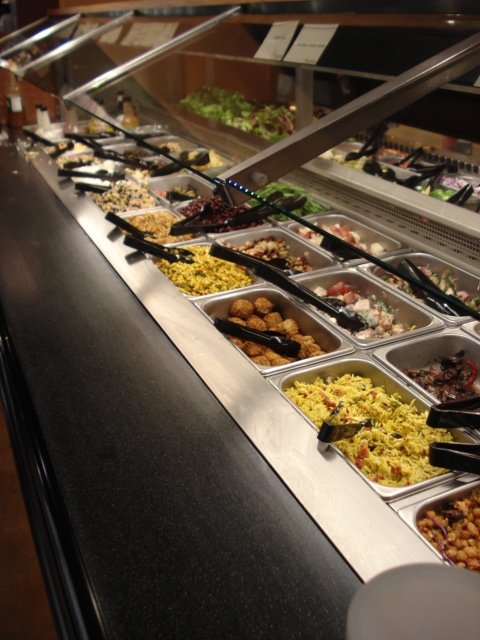 And the most amazing falafel balls! 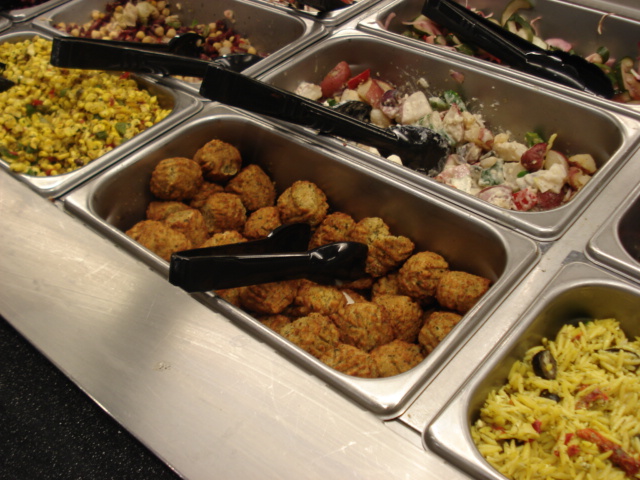 While I was sneaking my photos, the foodservice manager came over to see what I was up to. I had to explain that I had a food blog and boldly asked him if he would take my photo for you guys

this !
He was super nice and even said he would email me the falafel recipe. I wrote down my email and the blog, so we’ll see if he remembers! 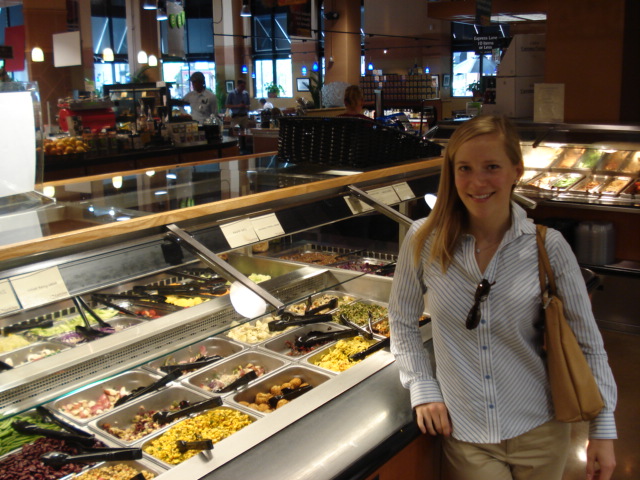 On to the scrumptious salad. My strategy at salad bars like this is to fill the bowl 2/3 full with raw veggies. They are on the bottom and I have little bits of yummy salads on top. Sort of like stores use packaging to fill up the base of gift baskets and put the good stuff on the top to make you think they go all the way down. So while it looks like a very extravagant salad, it’s mostly veg. 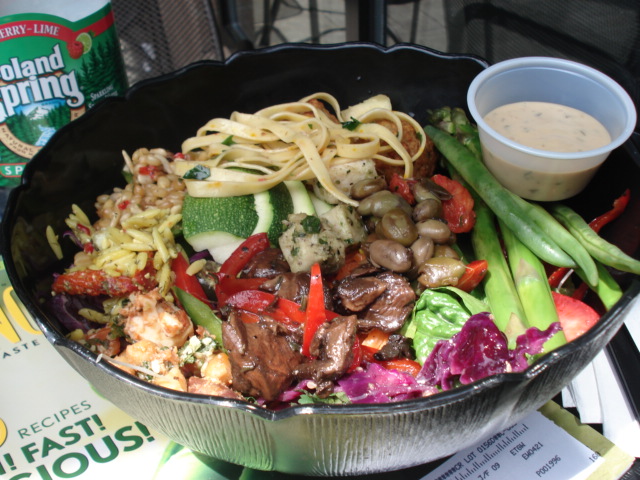 So each of the fun salads was only about a tablespoon, except for maybe the long noodles and I got a little more of the wheatberry. I estimate the calories on this by rounding to about 25 kcal per tablespoon, which is based on the Wegman’s information in CalorieKing since Wegman’s has many of the same gourmet salads. Then I just round all the raw veggies together as “vegetable salad 2 cups” or whatever I had. So I’m guessing I had about 450 kcal in this bowl?

This was also my first time trying Annie’s Goddess dressing!! I haven’t wanted to buy it because I normally hate bottled dressings, but this was GOOD!! So I bought some! It’s much higher in calorie than dressings that I would normally buy, and much more than my homemade ones, but for the convenience of having it pre-made and a flavor that would be hard to replicate, it’s worth it. I also got the Maple Ginger to try – it’s good too!

I took my EatingWell magazine to read in the sunshine 8) 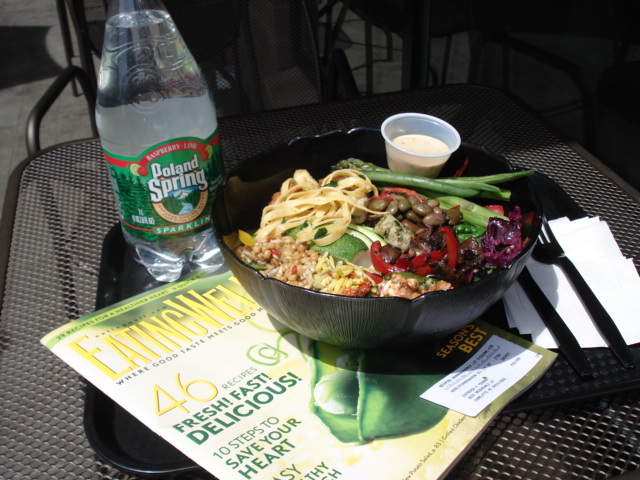 I didn’t sit down to lunch until 2 p.m. and then tried to take a long time eating my salad. I shopped afterwards (more hemp milk!) and had a mango key lime cookie sample (SO GOOD!) and a chocolate covered almond sample for dessert! My toes are nice and painted from the pedi!

When I got home I decided to walk to the grocery store for goat cheese to have with dinner. ‘Twas fun – about 30 minutes there and back.
Until then…