Learn how to make homemade carbonated water carbonated stored in a kegerator! 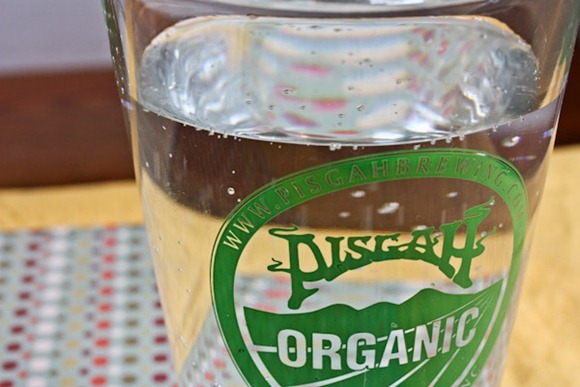 What is it about fizz that turns a drink from boring to brilliant?

Having sparkling water on tap is perfect when you want something exciting and refreshing but without any calories or alcohol.

And for those who find drinking water during the day a chore, it’s now like a reward!

How To Make Homemade Carbonated Water

Having said all that, you’re probably not going to go to the lengths of making homemade carbonated water this way unless you’re already a homebrewer who kegs.

It’s about 1.5 cents per 12oz glass (plus the cost of any flavored ingredients you add) compared to dollars per bottle commercially, but the equipment is probably not worth the investment unless you want to start putting beer on tap too!

All About Kegs For Sparkling Water Storage

The soda industry used to use these kegs (called “cornelius kegs” after one of the manufacturers) to deliver soda to restaurants.

Nowadays, they deliver a box of syrup that gets mixed in-line with carbonated water in the system.

Lucky for us homebrewers, that opened a world of used kegs to us that are perfect sized for homebrew batches. 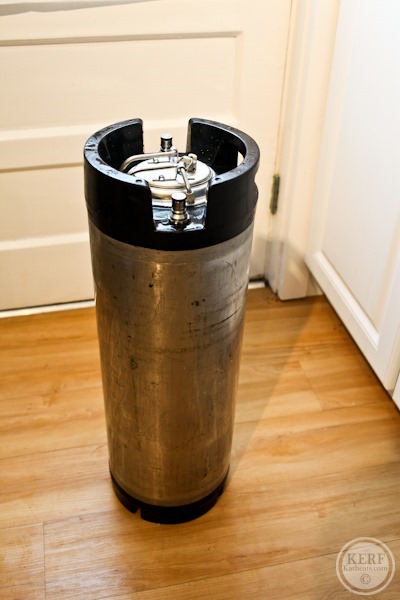 Step 1: Start By Cleaning Your Keg

First I clean them thoroughly, taking all the hardware apart and soaking in a cleaner similar to oxyclean.

Then I sanitize with a homebrew sanitizer.

This thoroughness is honestly probably not necessary for sparkling water, but I do it because these kegs will also be used to hold beer at some point, and contamination from unwanted microorganisms can quickly ruin a batch of beer.

I then fill it almost to the brim with ice water.

To chill five gallons of water you’ll probably need about 5-10 pounds of ice.

Alternatively, you can just fill the keg and let it sit in a fridge for ~24 hours. 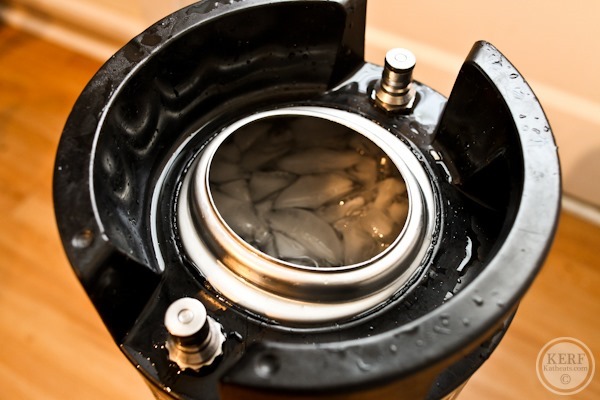 Leave about a quart or two of headspace inside the keg – it will make carbonating easier.

It will also carbonate easier if you get it as close to 32 degrees as possible. 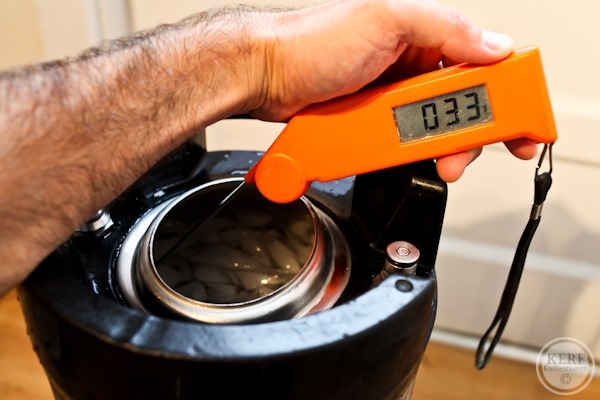 Step 3: Add Flavors To The Water

There are so many options out there and you really can’t go wrong.

Keep it light at first because at worst you’ll just have sparkling water that doesn’t taste like anything, but overdoing it is a bummer.

One of my favorites has been this lemonade for a very subtle raspberry sparkling water: 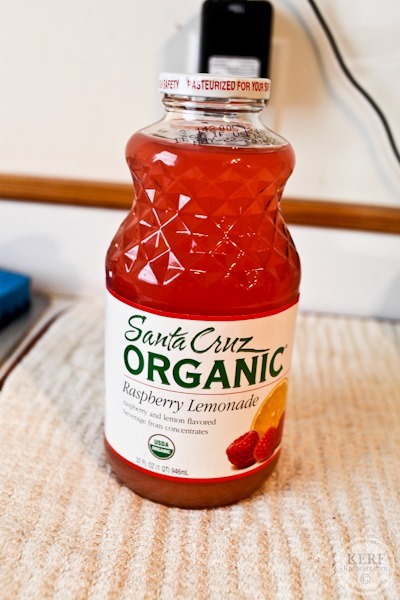 Another classic option is to strain the juice from a bunch of citrus fruits.

Try a lime, lemon, and two oranges together.

Or you can soak fresh mint in green tea at room temperature for 24 hours and then dose your water as desired. The sky’s the limit!

I started with 1.5 cups of this lemonade but sometimes all it takes is a quarter cup of something very strong. 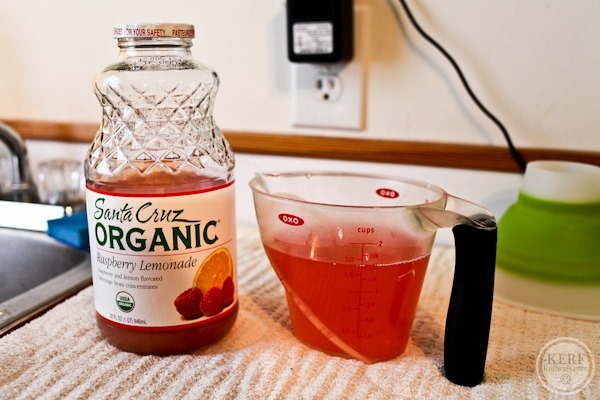 I ended up adding another half cup later on for a boost in flavor.

Now that you have cold, flavored water, it’s time to carbonate.

You’ll need a CO2 tank and regulator, plus the appropriate fittings to connect to the keg.

Many homebrewing websites sell a starter kegging kit that includes the tank, regulator, fittings, and one keg, and they usually run about $180-200. 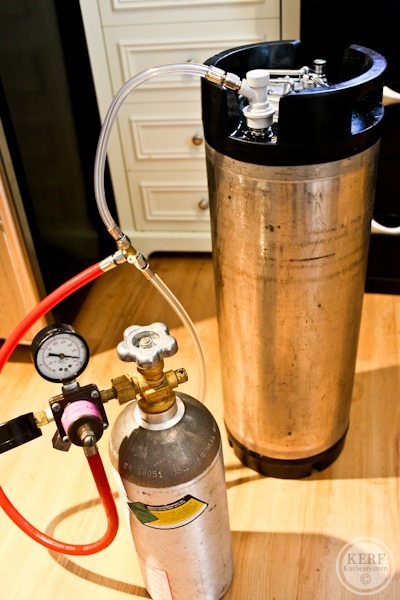 Once hooked up, I turn the PSI up to almost 30. 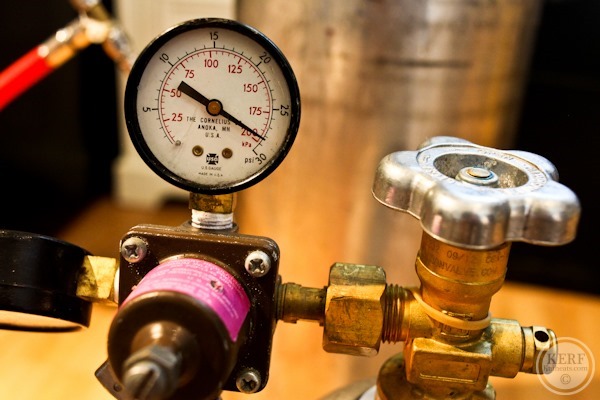 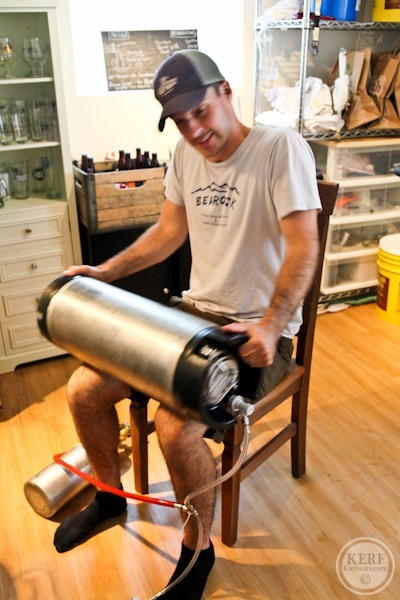 No seriously!  We’re taking advantage of the fact that gas will dissolve into a solution when under pressure.

Shaking the keg just moves the water around and exposes the surface area to the CO2 that is being pushed into the keg.

This is why you want to leave a quart or two of open space inside the keg – that’s a lot of surface area that can be moved around.

Turning it on its side makes it easier to move around.  It takes about five minutes.

I’ll gladly look stupid for five minutes to have sparkling water on tap!

Check it every couple of minutes to know when you’re getting close.

Unlike beer, water doesn’t create any foam to explode out of the tap so it’s easy to check.

Once it’s fully carbonated, I reduce to a serving pressure of about 12 PSI. This is the same pressure at which I serve my beers.

Some homebrewers will get super fancy and have extra equipment to maintain the high pressure but I find that a normal amount of carbonation is plenty refreshing and tasty.

Check out this chart for pressure/temperature recommendations for serving.

I usually aim for around 2.2 volumes of CO2.

Step 7: Store Your Homemade Carbonated Water In A Kegerator

When ready I plop it into the kegerator!

That’s a whole ‘nother build itself, but I pretty much followed these instructions to the letter. 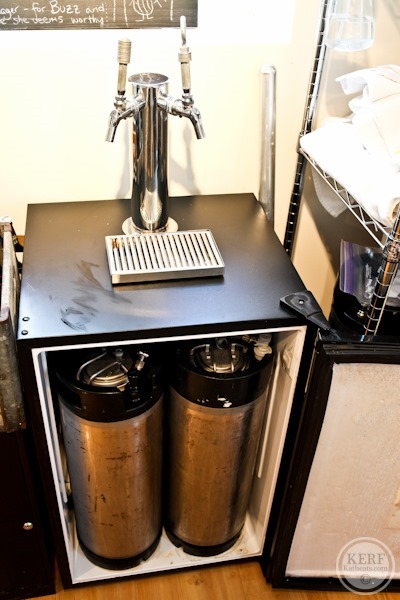 Go forth and live your life refreshed! 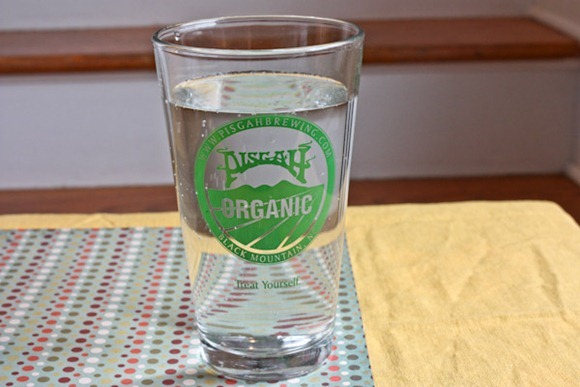