I forgot about you guys!!! I was just sitting here responding to emails and realized I hadn’t blogged lunch yet 🙂 My photo shoot threw me off!

We had a fun food lab this morning – cookies!! We split 9 cookie recipes between the groups and baked them off with slight variations in ingredients and then went through a “Sensory Evaluation” to determine how they were different in taste and texture. It was quite interesting. Here are the photos of the different bakes (I don’t have the energy to label each one, but they get progressively more cookie-like as they go, starting with just flour and water and ending with a real recipe) 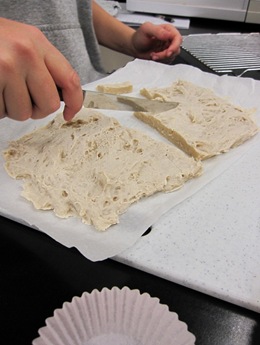 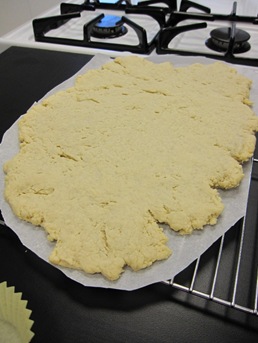 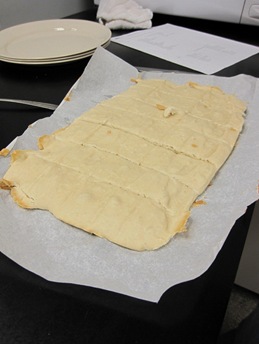 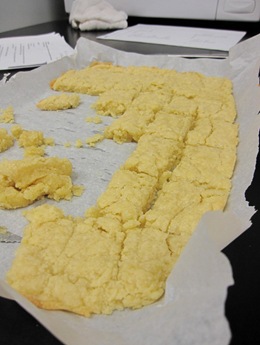 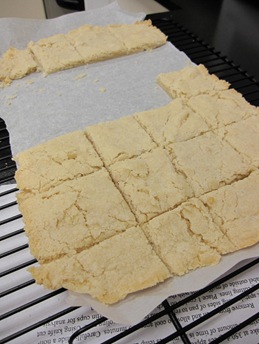 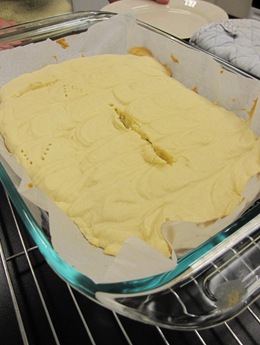 And ours, which were the real deal. 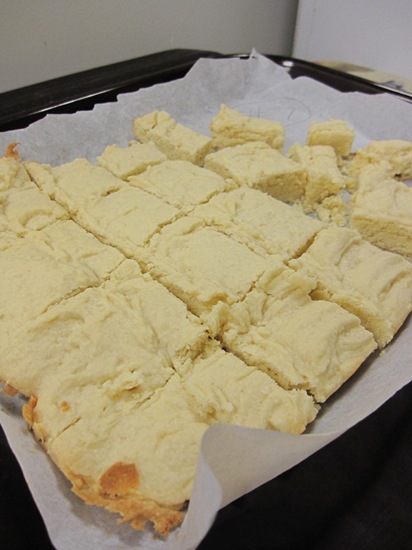 Our for sampling (along with store-bought Pillsbury on the right) 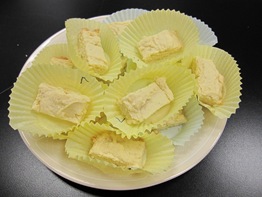 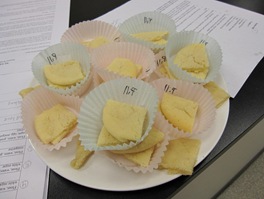 Yum! Unfortunately they were baked with margarine ( 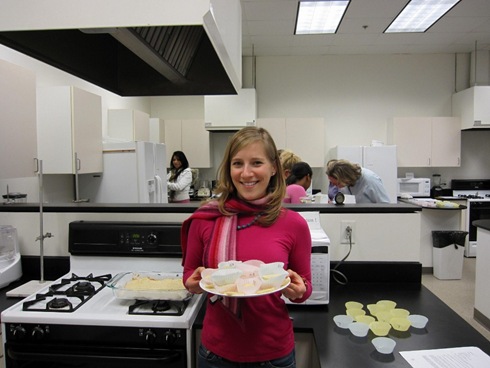 My sample plate with some palate cleansing H2O. We were told we could spit out anything we didn’t want to eat after tasting into a paper cup, and I probably spit out 75% of mine (which was a gross process). I just swallowed the ones that tasted good (actually I liked the ones without egg the most – they had a better texture. Chewier and less cakey). But #5 was made with shortening and was disgusting! It tasted just like vegetable oil. And the one with just flour and water was pretty strange too. 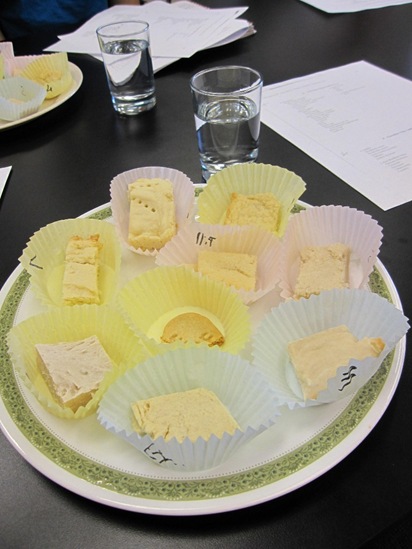 After class I moved on to my photo shoot. Here’s what I packed!

A spinach salad with green pepper and carrot, walnuts and cottage cheese (dressed in a little EVOO an salt). 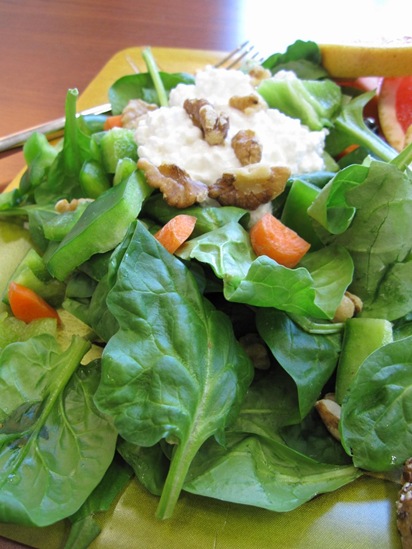 Plus half a grapefruit … 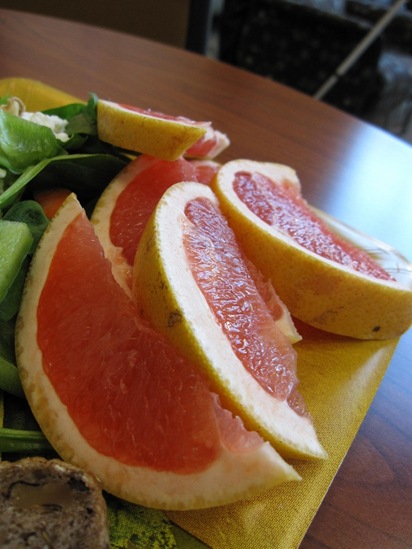 …and a slice of bread. But since we’d just finished our sampling an hour earlier, I wasn’t terribly hungry and gave my bread to the magazine’s art director, who’s a big fan of GH bread 🙂 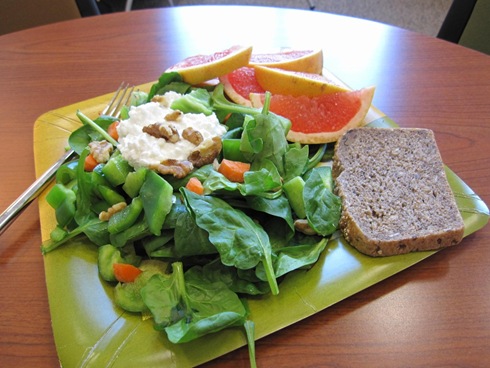 The shoot went really well. I may not make the cover (depending on how the layout ends up) but we will see. They took me photographing my food (which was tough to hold the pose realistically for so long) and then also in a different outfit on the elliptical! I took a peek at a few of the photoos and they are cute.

I got home at 3:30 and was pretty hungry for a snack – I missed that bread after all! The husband brought home this Morning Glory Muffin from GH yesterday. It was divine!! I wonder how healthy it was because it sure tasted healthy – filled with dried fruit, carrots, and stuff. 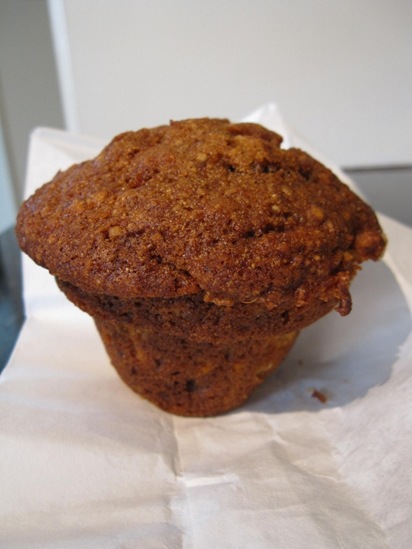 Crumbled over half a cup of yogurt with tea – 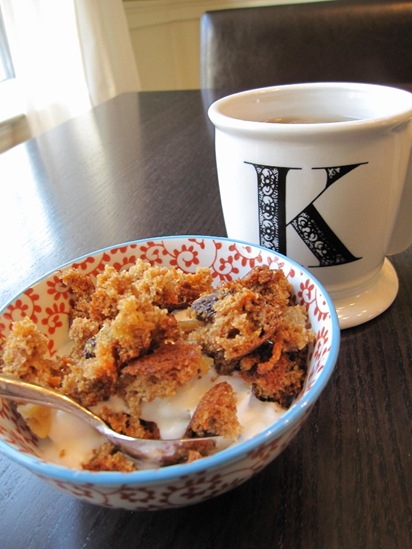 Yay for Charlotte Restaurant Week!! We’re picking Karen up at 6:50 to head to a cool Italian place we have never been to. See you later tonight (if I remember to blog!)