You are here: Home / Weekend / A Hard Day’s Work

WHEW – I spent the whole first half of the day on the move!

The husband and I went running at the Greenway and did 6 miles in about 54 minutes. Maybe I’ll try 6.5 next week. It was a great run for me (although I could feel my fiberific breakfast in my stomach a little too much in the last 3 miles).

My dad used to make us do yardwork when we were younger. I hated it! I never minded Fall Raking Day, but I hated weeding and pruning. One time he made me cut bushes with scissors because they need a trim. C’mon!! So I decided that if I could help it I’d never do another lick of yardwork. The husband and I split up our chores depending on what we like to do, and so obviously he does the yardwork. I help out when I’m in the mood 🙂 After our long run, I got a guilt trip about all that has to be done, so I offered to do some weeding in the front yard. Wasn’t too thrilled. 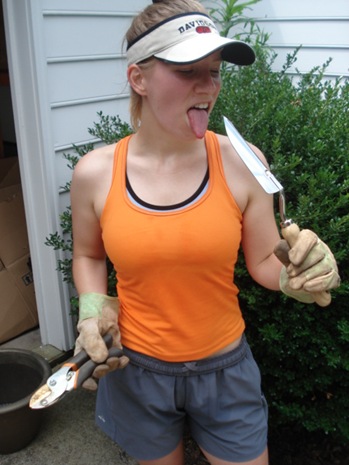 But then……I asked if I could try the lawn mower ! I love vacuuming because of the visible results, but I’ve been scared of the mower. After a quick tutorial, I started clipping away the front yard. IT. WAS. SO. FUN!!! But also very hard. I thought lawn mowers were kind of self propelled, but it was really heavy and hard to maneuver around. I still had my heart rate monitor on from my run and looked down to see my HR around 150 mid-mow. Wow, that’s as hard as the elliptical! 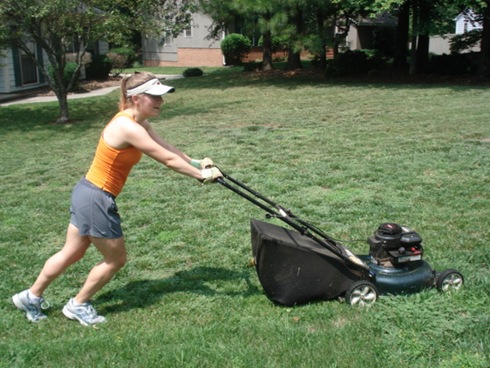 And my live action shot!!

After mowing, I did end up doing some trimming and pruning. I got most of the tall weeds out of the front bushes and then went to town on a bush I hate in the backyard because it covers up the dining room window. It’s pretty much a stump now

So after 6 miles of running , 30 minutes of mowing , and 45 minutes of pruning and hauling brush , I was POOPED! And also very, very thirsty. I was bad and didn’t have a water bottle with me and didn’t want to go inside all dirty to get one.

After a quick shower and two 16 oz cups of water (to which I added a "fitness packet" mix I bought at Target two years ago and never use – I figured this was a time when I needed a sports drink for some electrolytes and a small dose of sodium), I sat down to lunch ready for fuel!

We boiled some fresh edamame from the CSA for about 5 minutes in salted water. Just like in a restaurant! 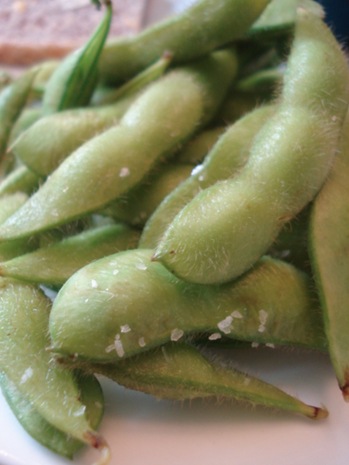 And I had 2 slices of corny bread with Smart Balance – 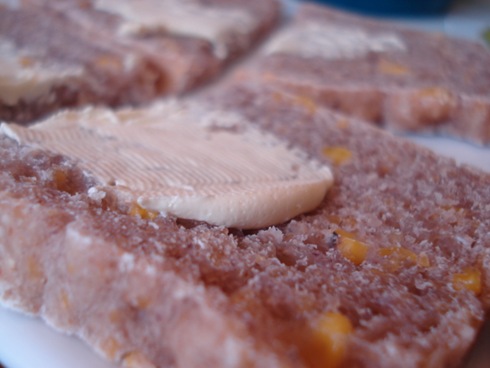 And a yogurt, blueberry and granola cup – 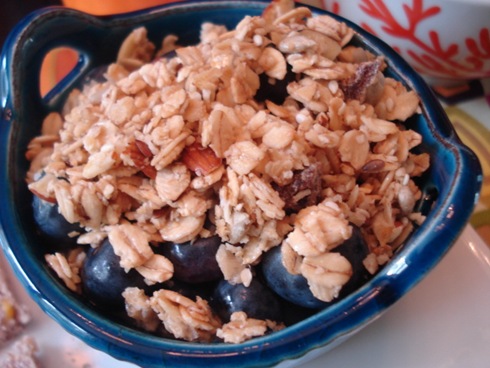 And a handful of kashi crackers – just what I was craving! 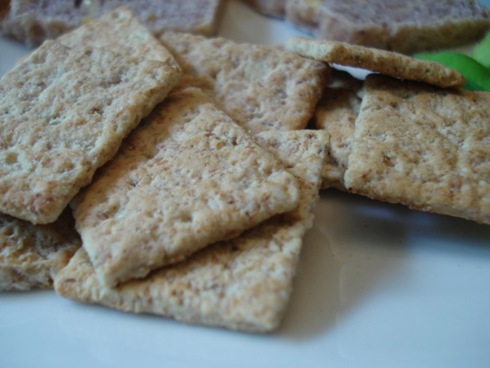 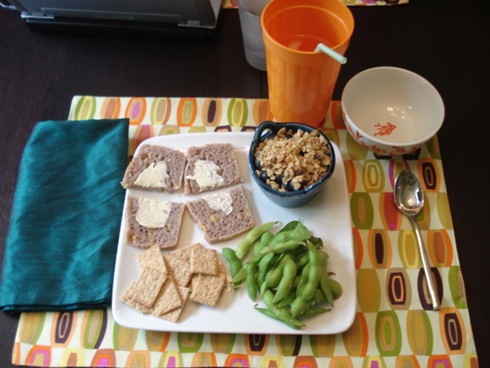 Since lunch I’ve been editing the Crepe Video from last night. It’s another long one, but hopefully a little entertaining!