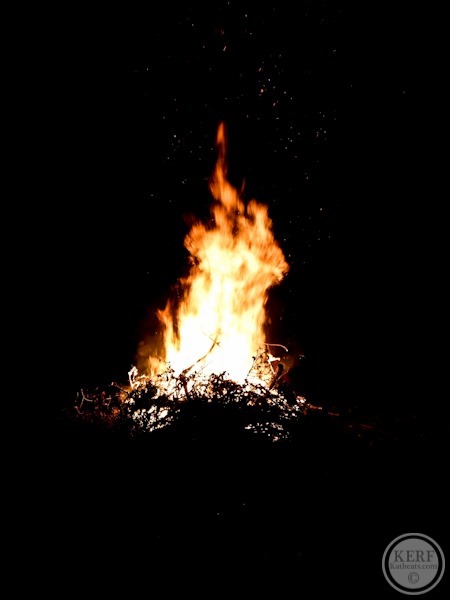 This past weekend was the epitome of fall – farmer’s markets, football and fires! S’mores too!

I spent Friday night working, so that was uneventful. Sometimes I just get the craving to write and take advantage no matter what time of day it is.

Saturday we were up early (as usual) and headed to the market where I found a new squash – Honey Nut – at the Twin Oaks booth! 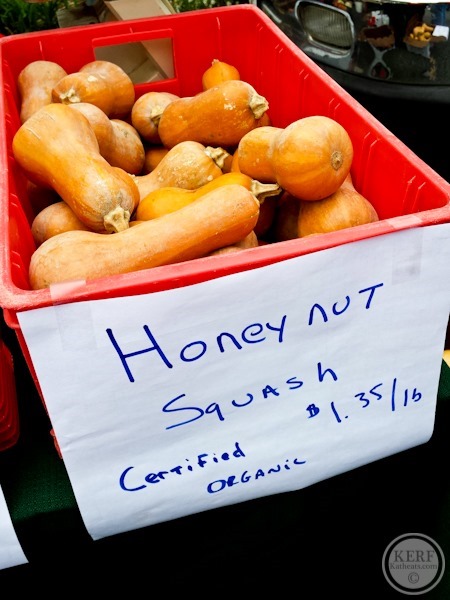 They are so tiny and cute and are supposed to be sweeter and earthier than butternut. 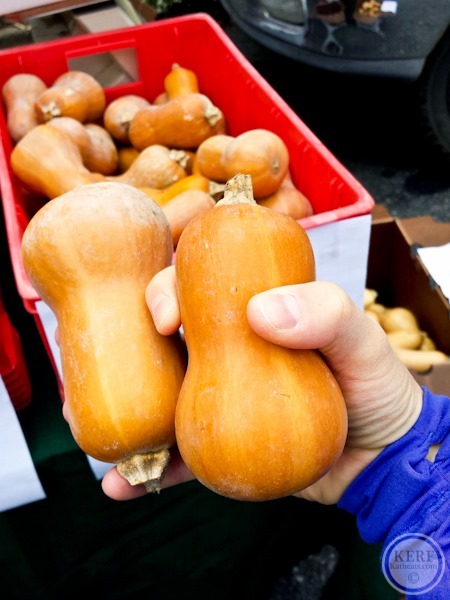 I was also gifted this awesome owl towel from Amy at Girl’s Day Out as a thank you for writing about her a few months ago. Perfect for fall! 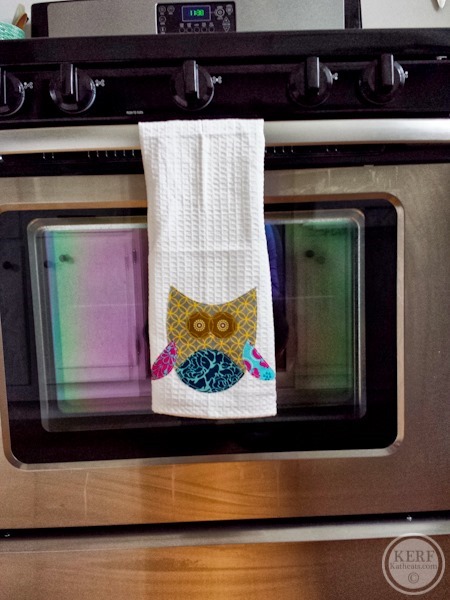 After the market my friend Becky and I walked over to Lee Park to check out the Chocolate Festival. 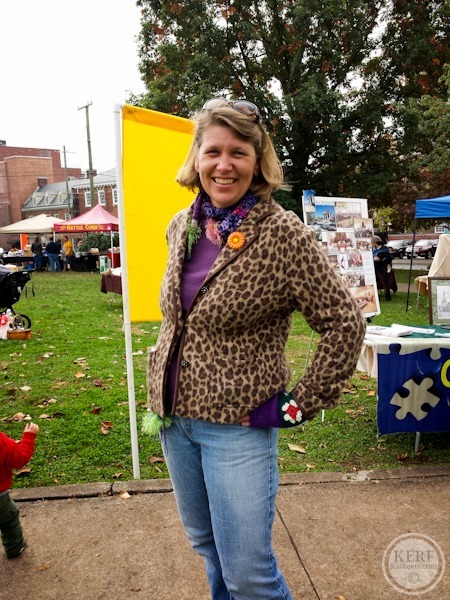 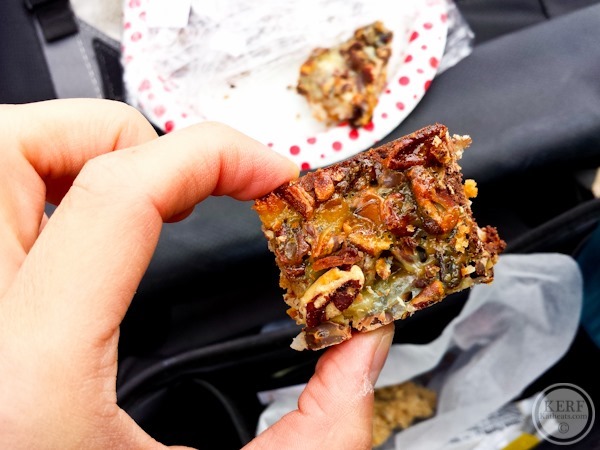 After returning home and giving Mazen lunch, Matt arrived, so I went out for the run I never did that morning. I’m proud of myself for squeezing it in! Just 3 miles, but a wonderful jog. 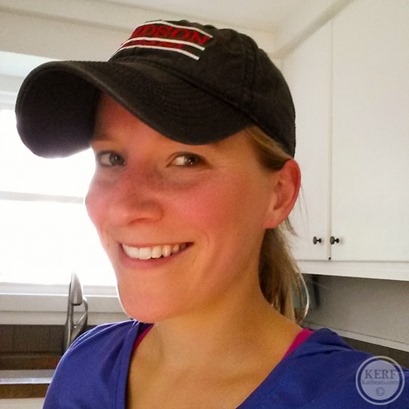 When naptime concluded, we oranged ourselves up and headed to our very first UVA football game!! 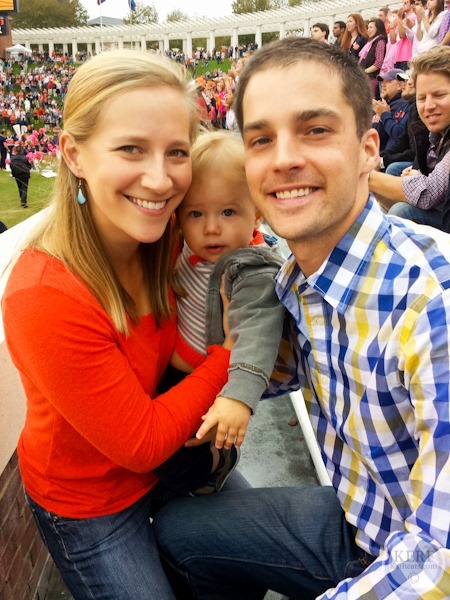 Our neighbors John and Christine invited us to go with them. They have awesome front + center seats for the season! And a really cute baby. 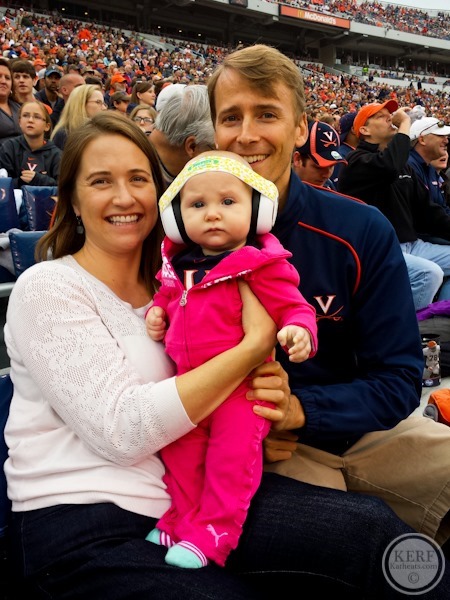 They are die-hard Cavalier fans, evident by the name of their daughter, Virginia! 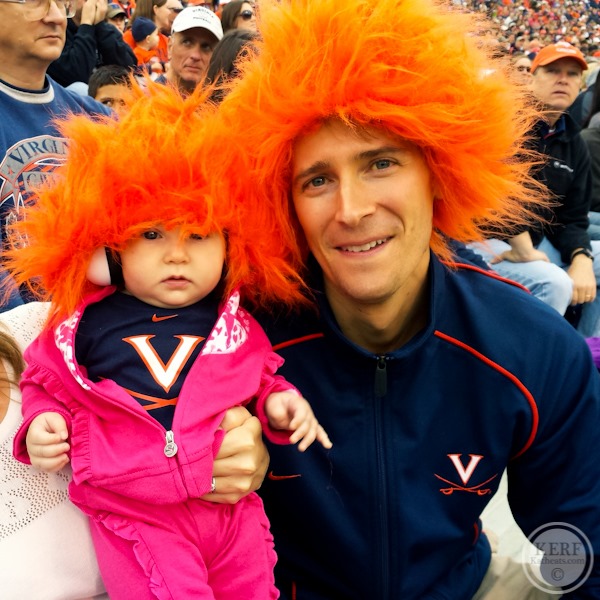 She really got in the spirit 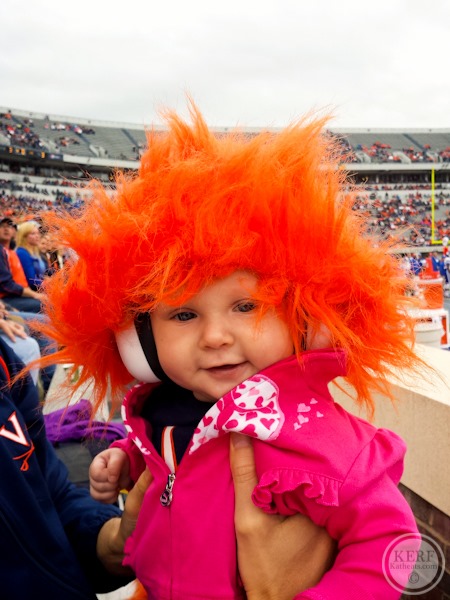 We thought it was hilarious that during the Virginia v. Duke game our kids actually had Virginia and Duke in their names! Matt and I were 50/50 for each team, but Mazen wasn’t sure who he wanted to root for. He clapped when UVA scored a touchdown but he liked waving at the Duke players on the bench too. I guess time will tell! 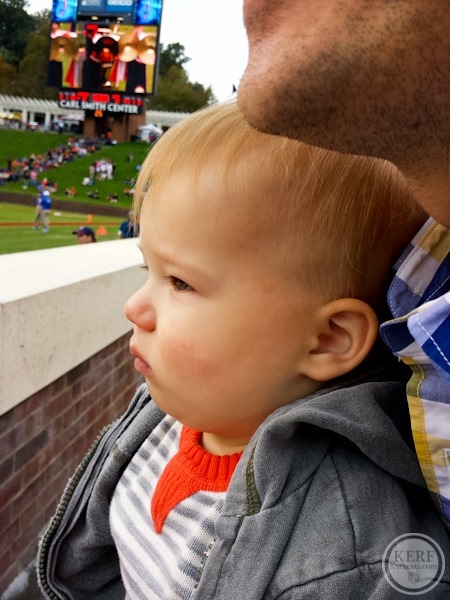 He did wonderfully during the game – we were quite surprised – however we left after halftime (and missed Duke’s comeback to win – darn!) He loved the marching band 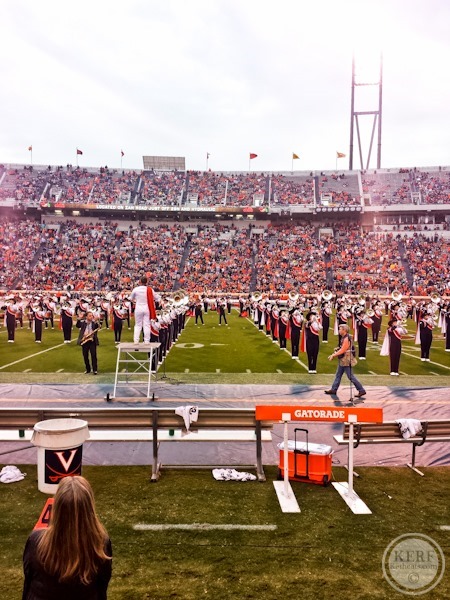 That evening we headed to a friend’s house for a Harvest Party. 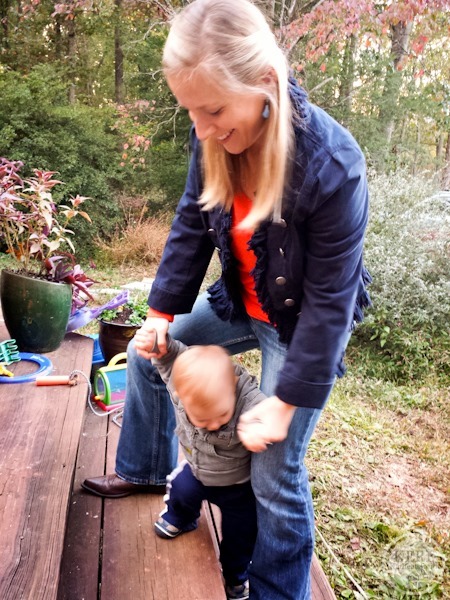 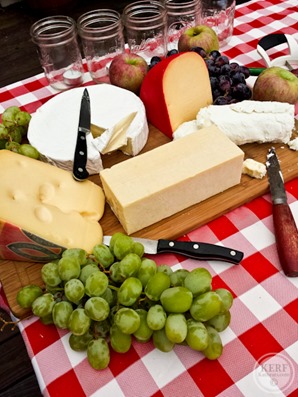 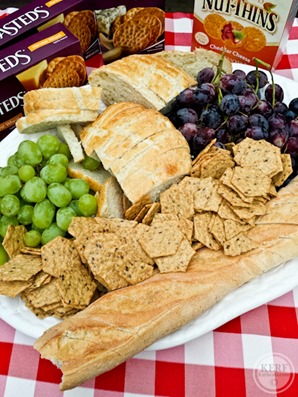 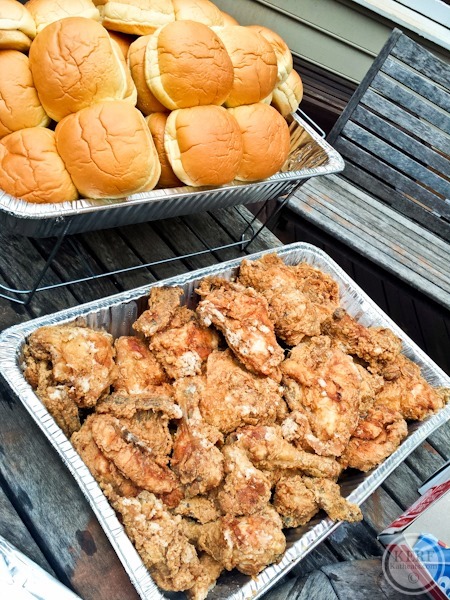 The bonfire was perfect on a chilly night 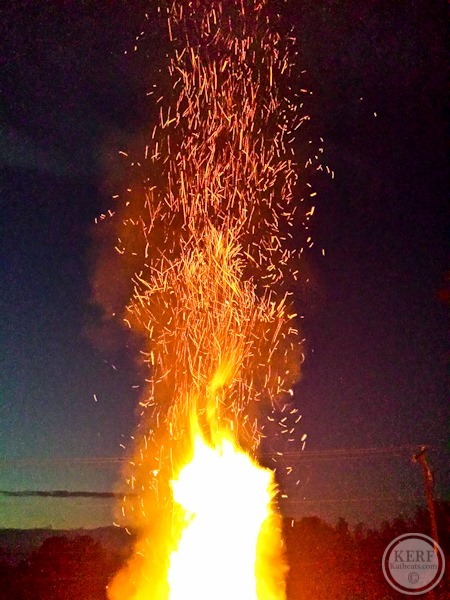 Thanks to Matt for roasting me 2 marshmallows, which I excitedly turned into s’mores. Yum! 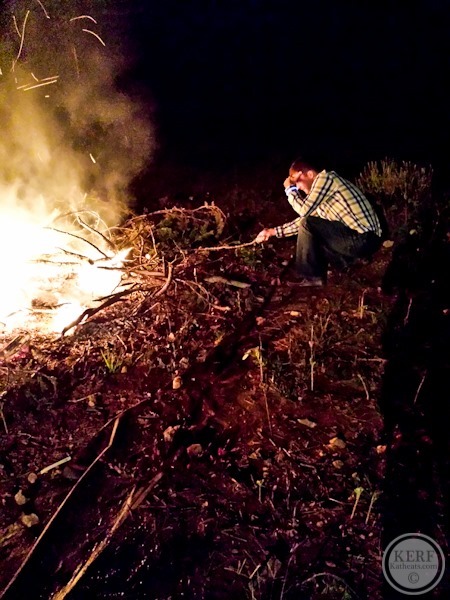 Sunday morning we had plans to go out to breakfast, but then we realized that Pumpkin Swirl bread toast and eggs sounded just as good, so we stayed at home. 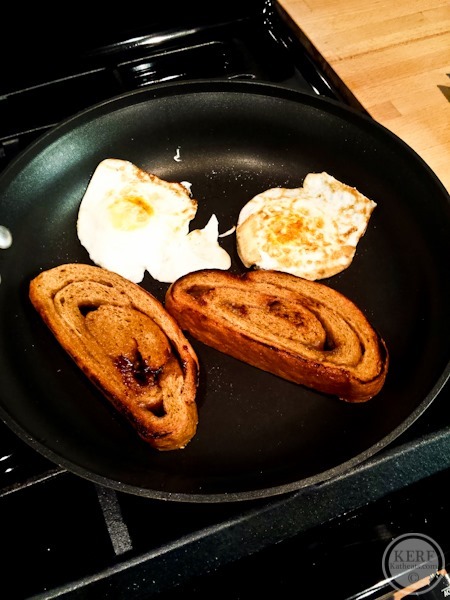 After breakfast digested, I geared up for a soccer game! 90 minutes of fun in the crisp weather. 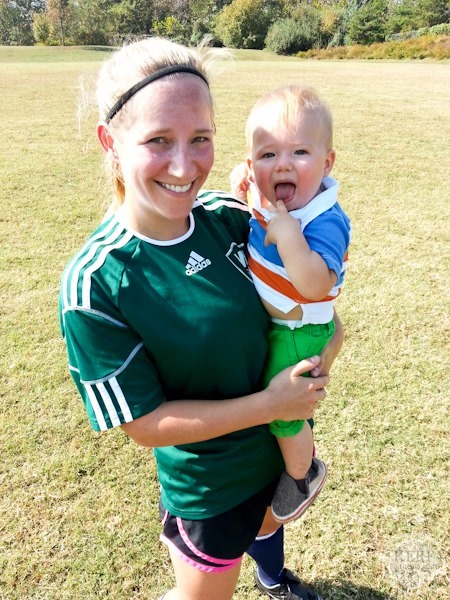 I’m the little green person on the left! 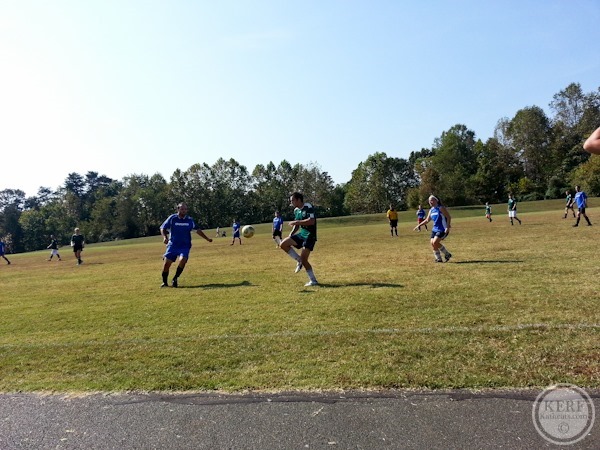 Later in the afternoon we headed to our neighborhood’s fall picnic. I was in charge of the kids’ activities and orchestrated pumpkin painting, pin-the-nose-on-the-pumpkin and a cake walk. We had all kinds of potluck foods for dinner. ‘Twas delicious. 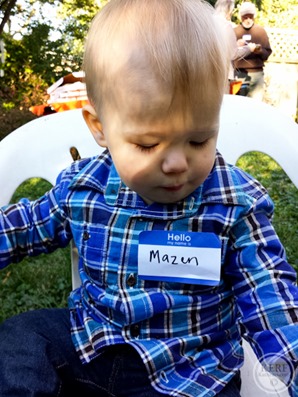 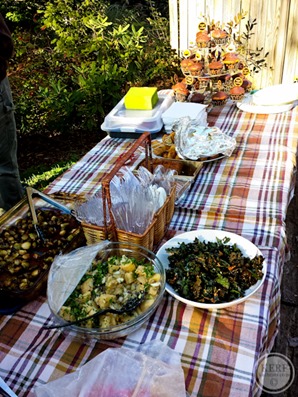 How fall was your weekend?