There’s nothing quite as uplifting as good music + sunshine!

Having a totally awesome morning over here!

Got a great laugh last night when I walked into our bedroom and found Matt fast asleep with Bocker propped up on a pillow. The Bears have been hibernating all winter on a rocking chair and came out to play

I got a great night’s sleep (after watching that fabulous Gossip Girl episode!) was up at 5 to hit the gym.

Whilst there I did 30 minutes of mastering the stairs followed by 15 solid minutes of weights. 17.5 pounders today for my biceps, shoulders, triceps, delts plus lunges, dead lifts and squats and abs at the end. W00t.

Home –> GLEE blaring throughout my house!!! I literally danced my way through the morning. I so need to find an adult glee club to join in Charlottesville…. did you know I’m a drama queen and love to perform!?

Check out this classic bowl of whipped banana – 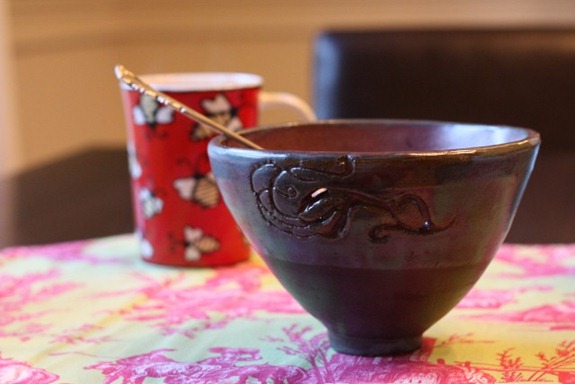 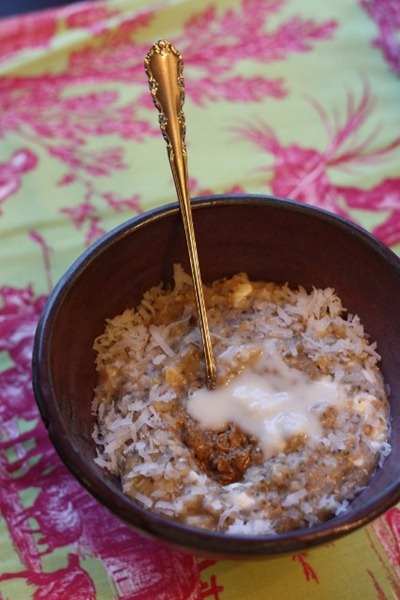 I used the last of my Bob’s Red Mill Apple Cinnamon Hot Cereal! Moving to to try their 10 grain mix next! 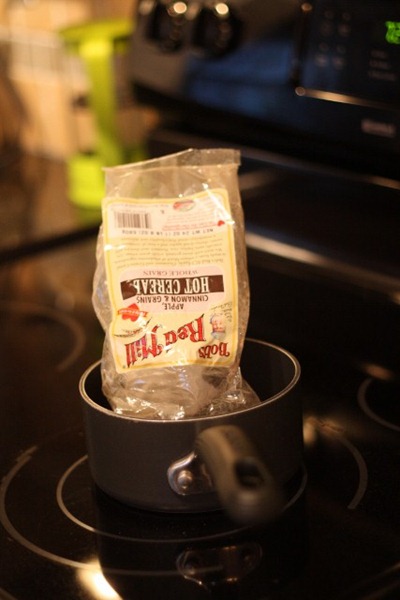 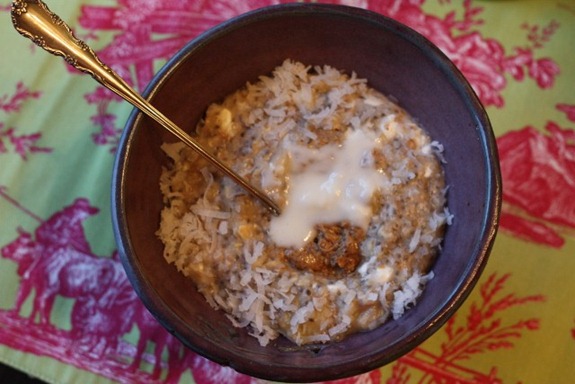 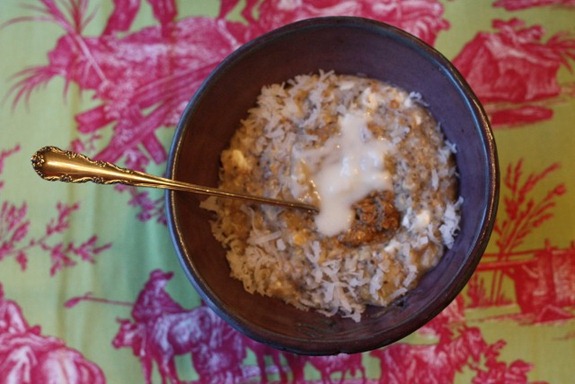 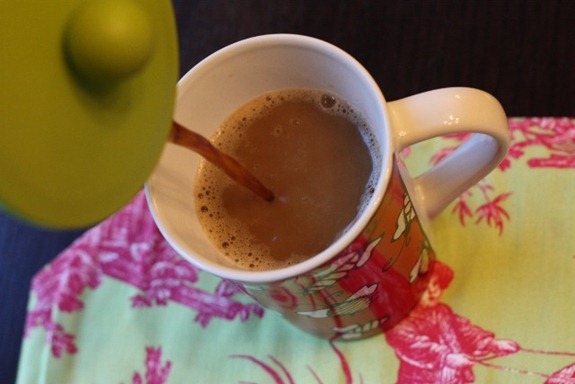 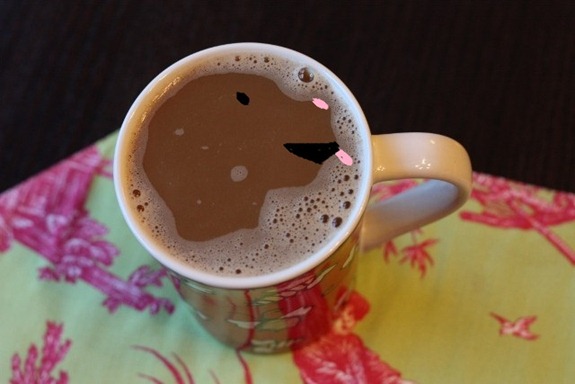 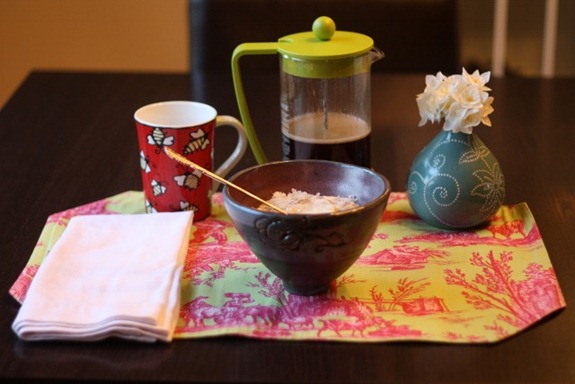 Wanted to share this essay Matt wrote as an email to a reader about his career journey and how he went from insurance to being unemployed to opening a bakery and his happiness throughout. I thought it was perfectly written and that you guys might enjoy hearing his story:

It’s been an interesting road to end up opening a Great Harvest.  I feel like there have been several windfalls combined with lots of disappointment to lead me here.  Like a lot of liberal arts majors, I was ready to conquer the world after college.  I didn’t really know what I wanted to do – I just assumed I was destined for great things.

Then followed a series of jobs that were mostly typical post-grad gigs that weren’t great at the time, but seemed like they would lead me places.  I sold insurance and considered the financial planning route.  I applied to just about every job in Charlotte that would fit under marketing, advertising, and public relations.  I even looked into some environmental jobs and thought about getting a Master’s in Environmental Science.

The problem with everything I was doing was I felt like I was forcing myself down a path I wasn’t already enthusiastic about.  I assumed that if I found something that had some interest to me, and then I really pushed myself and embraced it, I would become that career.  To quote Kath, I was going to "fake it til you make it."

But I definitely knew that none of this was really for me, and the only things I’ve done in life that have captivated me on every level were cooking, baking, and brewing.  I worked at an upscale restaurant during college and really learned a lot about cooking, wine, beer, and the workings of a restaurant.  I really liked all the hands-on work, and the varied pace, and how every day is different.  Kath and I fantasized about owning a restaurant, but we never wanted the hours of a restaurant owner – missing every night and weekend, and every holiday.

I never considered a bakery for some reason, but between jobs I went looking for some part-time work, and considering my baking skills I thought I might be able to get a job at the local GH.  I applied, and was hired about a month later.  The GH owners were opening a second store so they had lots of openings, and they recognized that I came pre-trained (sort of).  After working at GH for a few months, I started to really pay attention to the store owners and what their job was like.  I remember thinking, "Hmmm, I bet I could do that," but I didn’t really pursue it at the time.  But as time passed, I kept asking questions about ownership, and begin to fantasize and talk about my dreams.

I don’t really remember that definite moment when I knew it was something I would do – it seemed to happen pretty tentatively.  Part of that is because of the GH application process – they really ease you into it.  And before we consciously realized it, we were committed.

Because my career path has been so disjointed, I don’t have a lot of career advice for people.  The most important thing I learned was that I shouldn’t have ignored my original feelings of "what I’m doing right now isn’t right for me."  On the other hand, I don’t really feel comfortable telling people the classic "follow your dreams" because for a lot of people, that probably does mean entrepreneurship, but we all know how many new businesses end up failing.  Kath and I are lucky that we have a very supportive company behind everything we’re doing.  I think a lot of new business owners could use something like that.

Ultimately, it takes a lot to admit to yourself that you want to change from what you’re doing right now – it feels like you’re moving backwards in your career or starting over.  That’s not completely true because any degree is better than none.  There’s always a way to leverage what you have to get where you want.  I think a lot of young graduates need to be taught upfront to swallow their pride, decide their path, and start at the beginning (note: that’s not the bottom), or else they’ll spend as much time as I did learning it by myself.

I hope this was the kind of information you’re looking for.  If you want to hear more specifics about any of this, I’m happy to write another essay!

What’s YOUR favorite Glee song? I have lots of favorites, but my VERY favorite would have to be Halo // Walkin’ On Sunshine. I gets me dancing every time!