Well the rain started coming down and it still hasn’t let up. According to Weather.com, the sun should be shining when I wake up tomorrow, so I’ll take that as a cue to go to bed now! 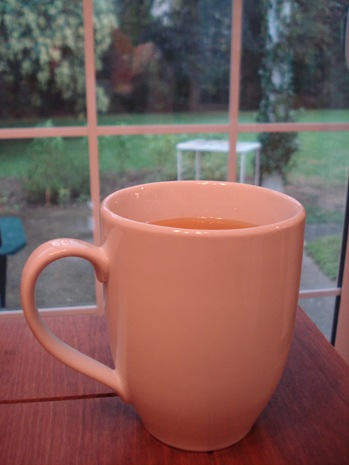 Followed by this around 5:00!! The husband asked if we were drinking wine tonight. I said I wouldn’t complain (as I worked at my desk) if there was a glass of wine set down beside me. And soon enough one appeared!!! I didn’t know which bottle he’d opened so I guess – a Petit Syrah! I’m gooood! But I didn’t know which winery and was surprised to find he’d opened one of the last bottles from our honeymoon. That means this bottle has been on our rack waiting for TODAY for almost a year and a half! 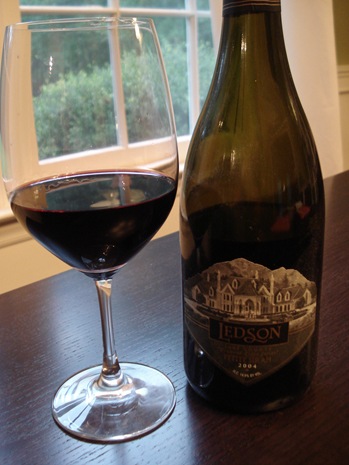 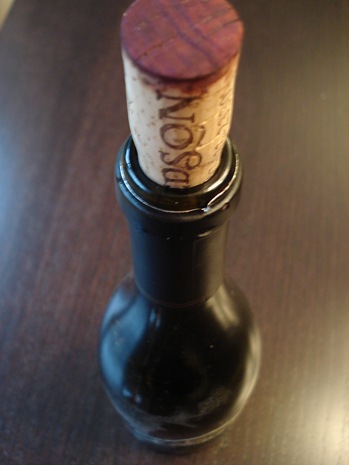 I’m going to let the husband take over the dinner recap because he was the chef! The soup he made was FAB-U-LOUS!!!! One of the top 5 we’ve ever made. Perfect thickness, tons of flavor, filling and healthy.

Well, we were just in the mood for a thick and creamy ‘tater soup – possibly because the weather wasn’t great all afternoon.  Also, the soft potatoes from the CSA have been staring us down since we picked ’em up. 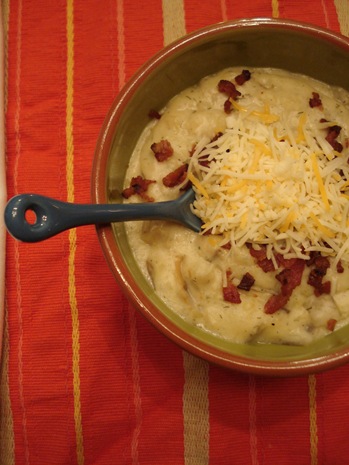 I really like it when we develop recipes like we did tonight.  We had a pretty good idea what we wanted it to taste like.  And we had a few ingredients that we knew we were going to use (potatoes, some leftover buttermilk, 2% milk, bacon).  While I’m pretty sure we could just throw some things together and it would taste good, we usually like to have some direction to work from.  So we hit our cookbooks looking for potato soups, and we looked on the internet as well.  The general consensus led us to combine this:

The procedure was really simple.  I cut up the potatoes in approximately 1cm cubes… no need to be super accurate here.  Cut bacon strips into small squares and begin to sautee in a cast-iron skillet.  Microwave potato cubes for 4 mins, stirring halfway through.

When bacon finishes cooking, remove from pan onto paper towels.  Try to leave as much bacon fat as possible in the pan.  Add potatoes and cook for about 8 minutes until they’re almost fully cooked.

In a mixing bowl, combine the flour with 1C milk and whisk together.  Pour this into a dutch oven along with the rest of the milk and buttermilk, and begin to heat on medium-high.

When potatoes are mostly cooked, dump them along with everything else into the dutch oven EXCEPT for cooked bacon and cheese.  Use a potato-masher to mostly crush the ‘taters.  Reduce heat to low and simmer for 30 mins.

Check on consistency, and mash potatoes more if desired.  If you want a completely liquidy-thick soup, you could use a stick-blender to puree.  Otherwise, portion into bowls, and garnish with bacon and cheese!  Crusty rolls on the side would be a nice touch… 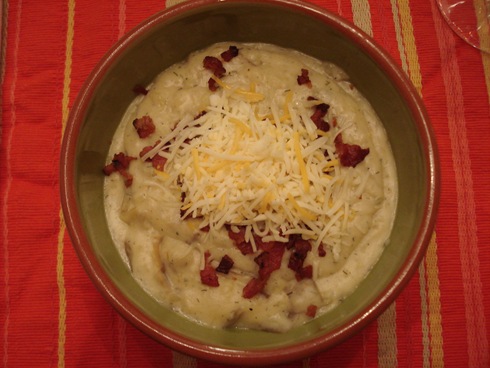 The soup made 17 half-cup portions. The whole recipe had about 1300 calories, so each half cup had about 75 calories. (*Not including cheese but including bacon!*) We each had about 2 cups of soup.

(Switched to water in the wine glass 🙂 ) 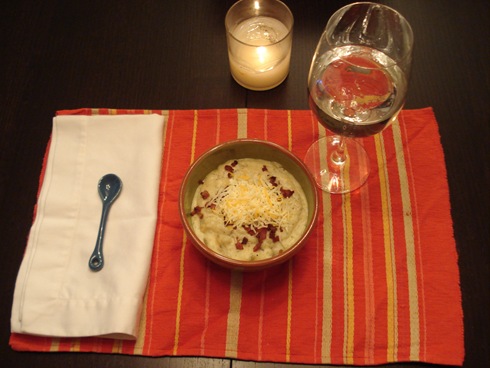 So there you have it!

Guess which bottle had water and which had wine!! I always sneak things into movies and wine in a plastic cup sure made Nights in Rodanthe more fun. 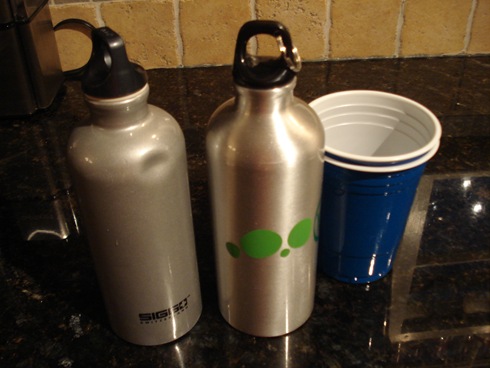 Being from North Carolina, I’ve always been loyal to Nicholas Sparks and having gone to the Outer Banks almost every summer for the first 18 years of my life, I really enjoyed the setting. I read the book when I was in high school, but I didn’t remember much about the plot, so it was fun to re-live the story. I definitely think Richard Gere made the movie. But Diane Lane is a favorite actress of mine and did a great job as well.

Once home around 9 we both were hungry for a snack. I had a cup of Kashi Vive, homemade granola, soymilk and a tsp of PB in one of my grandmother’s cocktail glasses. 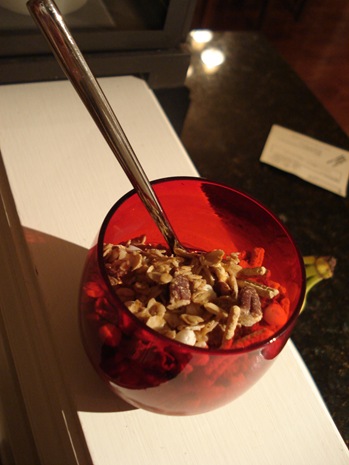 I’d love to keep eating more cereal, but I probably should chug some water and get to bed.

I’m counting on you, Sunshine!