You are here: Home / Lifestyle / Time Goes By

Ahhhhh. I had a relaxing afternoon. But it still managed to fly by!

After I finished this morning’s post I set out on a run and ended up doing 5.5 miles. I got home at 12:45 and realized I had had breakfast at 6:30 and was still going! (But yes, I was getting really hungry.) I had a few crackers and an apricot along with a big glass of water to tide me until I showered and got to EarthFare (which luckily only took me about 26 minutes 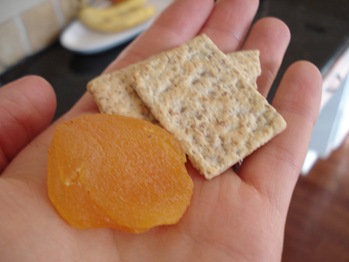 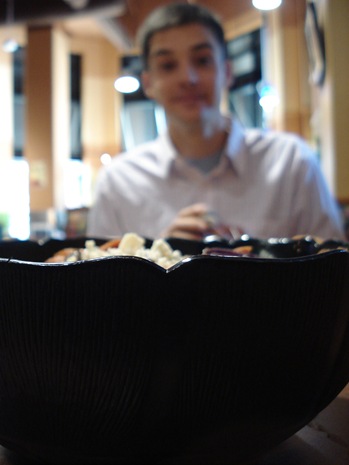 I think I was so excited to be done with classes that I went a little spoon happy on the salad bar! I had some of all my favorites. Please spare me this time of listing them – you guys know by know what they are! (Although I swapped my usual salmon, which was missing, for a few shrimp + artichoke and curried tofu!) 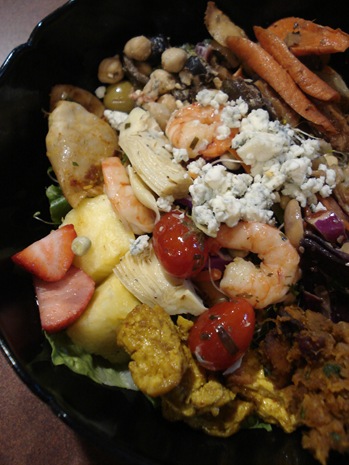 Somehow I managed to eat over a pound of salad though – 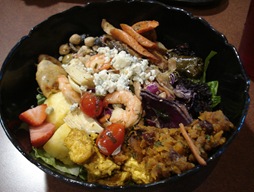 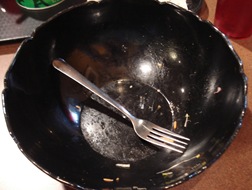 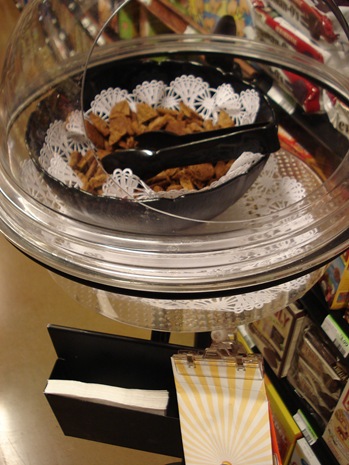 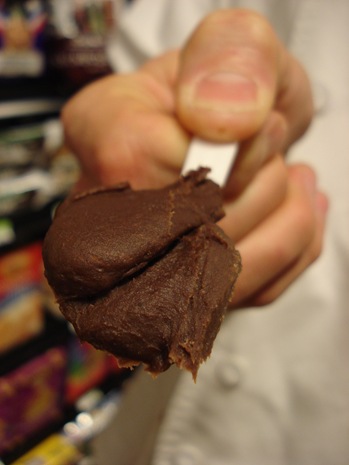 And some chocolate chips! 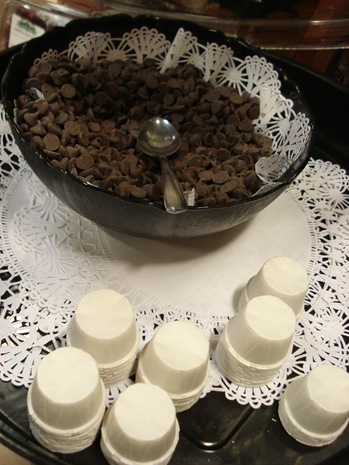 I spent the afternoon on the couch with some tea, candlelight and my down throw blanket …. 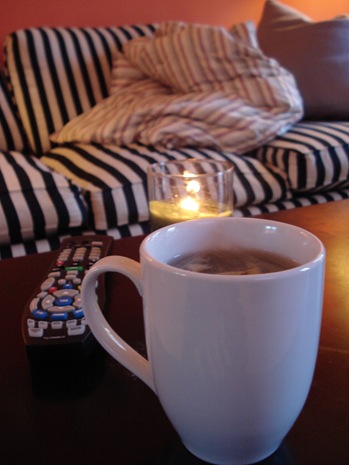 …..catching up on The Office (Dwight is hilarious!! And I LOVED Andy’s monologue!) and 30 Rock (which I think is just OK. I love Tina Fey but I hate Alec Baldwin). I haven’t had that much TV fun since I got my wisdom teeth out in 2004 and watched 5 seasons of Sex and the City for the first time!

For dinner I was excited about a new recipe – Fruitful Red Slaw from the cookbook Vegan Express by Nava Atlas. The cookbook is a good one with tons of recipes that suit people who cook like me: “What can I add to this to put some oomph in the flavor.” (Does anyone know the rules for sharing recipes from books? Can I put it up if I cite the source??) 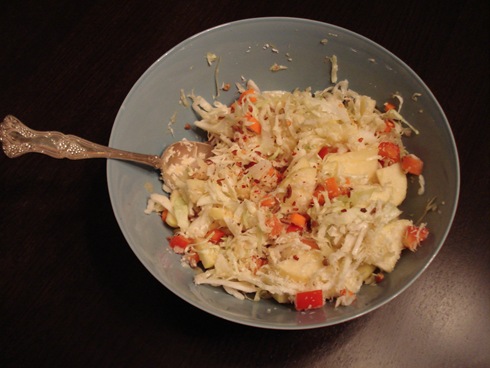 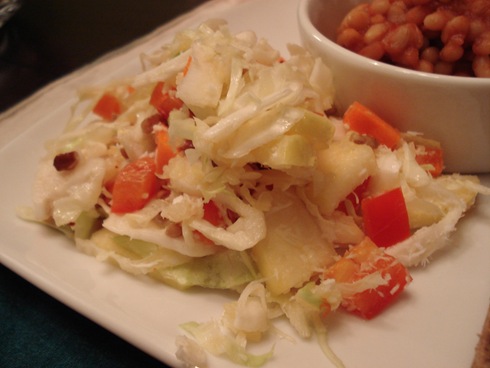 We needed something to go with the slaw and initially had planned sweet potatoes topped with navy beans. But fearing that might be too boring, I randomly decided to change plans and make Bourbon Pineapple Baked Beans instead! 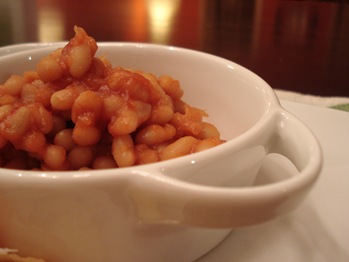 Here’s what I put in:

It made about 3 half cup servings, or 2 bigger servings. I had a little less than half and he had a little more. 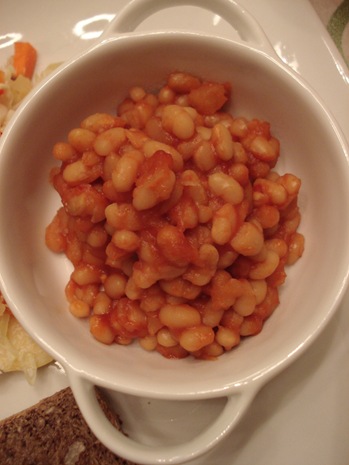 Plus whole grains for good nutrition! 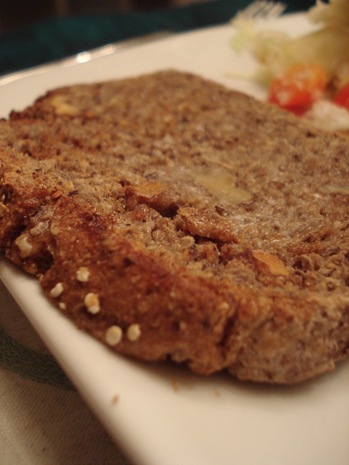 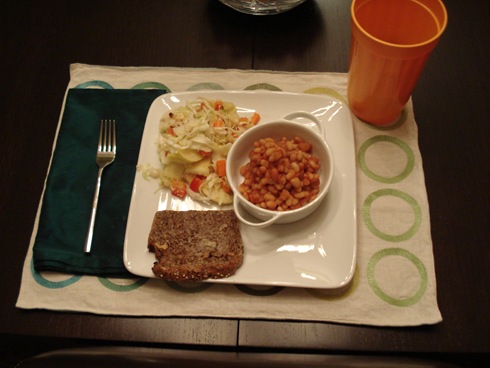 I had a few bites of the husband’s cereal surprise for dessert – and candy cane lane tea. We just finished the movie Little Miss Sunshine. I liked it just OK. Mostly because of Steve Carroll 😉

Soooooooooooo……….I’m running in a 5K tomorrow morning: the Jingle Jog, which is part of Charlotte’s Thunder Road Marathon. It’s also the Girls on the Run finale to their 12-week training season. Originally I had planned to race hard and try to PR, but I’ve been under so much pressure these past few weeks that the thought of having to mentally prepare to run my hardest tomorrow morning wears me out just thinking about it. I’ve already ran 3 mental 5K’s and one marathon this week!! So I decided I’m just going to run it moderately fast and enjoy the fun of being in a race environment.

The bad news is we have to get up around 5am to get going via foot, then lightrail, and it’s going to be FREEZING (29*). But once I am home late morning, I will really have some downtime. Can’t wait!

My plan is to take a bath now and read in bed. Not sure how long I’ll last because I’m pretty tired and should get enough sleep tonight for getting up early. Tomorrow night Andrew is here and we’re having dinner at Karen’s! Whee!