You are here: Home / Lifestyle / The Most Wonderful Evening! 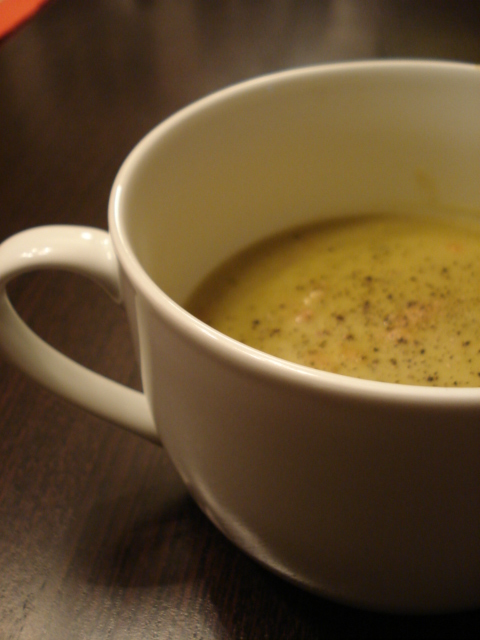 I haven’t had an evening as enjoyable as this one in a really long time. There was really nothing particularly special about it, but it just left me feeling SO happy and content.

The clouds broke just long enough for us to put on our rain gear and make the walk to the shopping center for our errands! After a quick stop into Blockbuster, Rite Aid and Harris Teeter we had our supplies and headed home. It was a total of about 45 minutes of walking – nice! I really wanted a latte from the coffee shop, but then I started to think about wine when we came across a wine tasting in the grocery store (I sampled 1.5 oz!) and thought I’d rather open some wine when we got home than have coffee, so wine it was!

A Glass of Wine

Once home and dry, we opened a bottle of Petit Verdot from our honeymoon – from Ledson in Sonoma – and it was fantastic!!! It did need to breathe though, and got better as the night went on. If you’re new to wine, try opening a bottle of a complex red and taking a sip every 5 minutes for a hour. It’s amazing how much the wine changes as it breathes (yeah, wine snob, “airs out” is a better term). 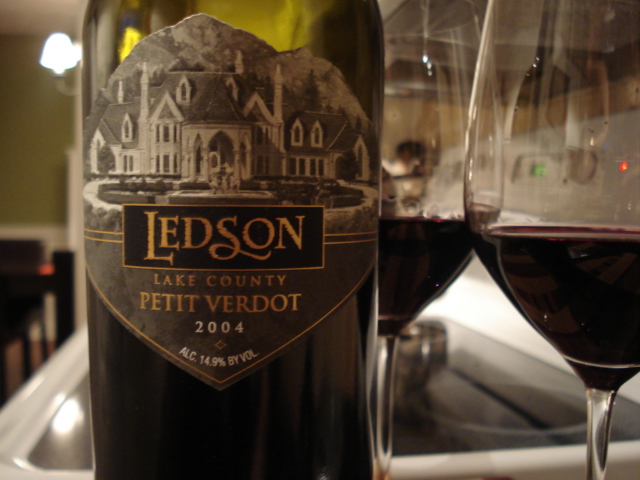 I had a 4 oz glass (these are HUGE Pottery Barn glasses so it might look like more/less than 4). I really wanted a second pour when it was time for dinner, but I knew better. And when I say knew better, I know from experience that 4-5 oz is all I can handle before I start to feel icky. Yeah, I’m a lightweight 8) 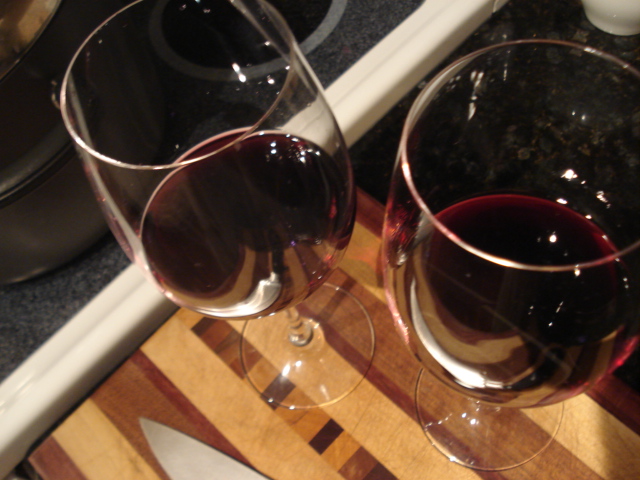 I had a few almonds to tide me over while the soup cooked. Just the right thing to take the edge off of hunger. 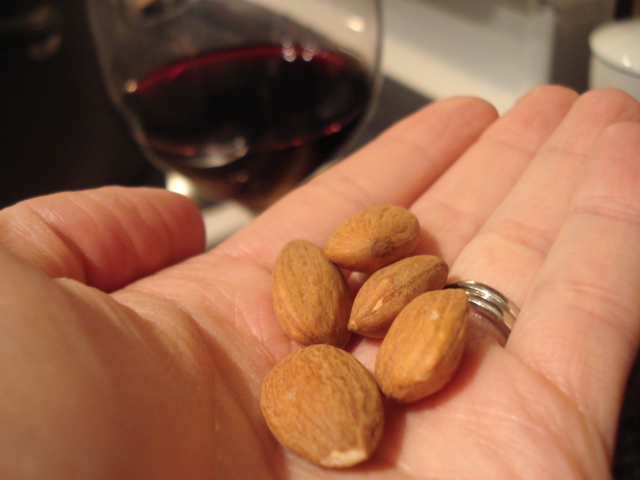 I wanted to watch a really fun, uplifting, easy to watch movie, so we rented The Holiday (well, I rented it and the husband watching agreeably 🙂 ) It was corny and predictable at times, but I just LOVE Jude Law, so he made the whole film. I had a VERY vivid dream about him a year ago and he’s captured me since (you know when you dream about someone and you feel like you know them?? That is me and Jude). Plus I love England because I spent a summer studying there in college.

On to the Split Pea Soup!

We decided to make the whole bag of split peas and went with half and half as the finisher. We had a big leftover spiral ham bone from Christmas that we put in (weighed before and after to get the appx. amount of ham that fell off). If you don’t have a leftover bone, you could just chop up some fresh ham to add.

After we removed it from the soup: 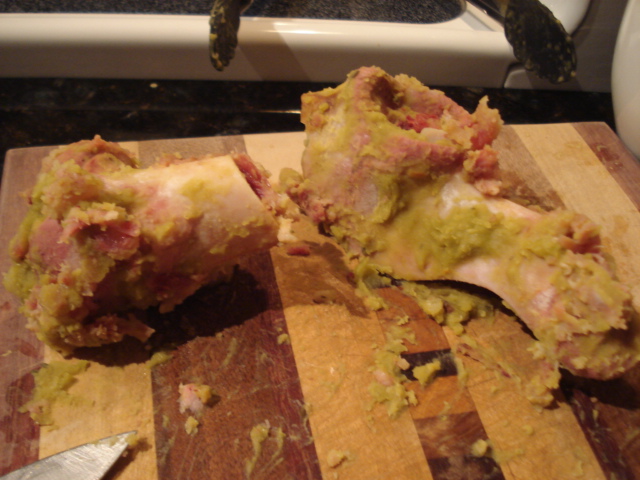 In the pot went:

Simmer first 6 ingredients for 1.5 hours or so. Remove bone. Add cream at the end.

Quote the husband: “This is the BEST split pea soup I’ve ever had!!!”

I didn’t get much for 370 calories, but it was rich enough that I didn’t need the volume to feel happy.

(FYI, this is an oversized latte mug that probably holds 2-3 cups of liquid. My guess is I had about 12 oz of soup) 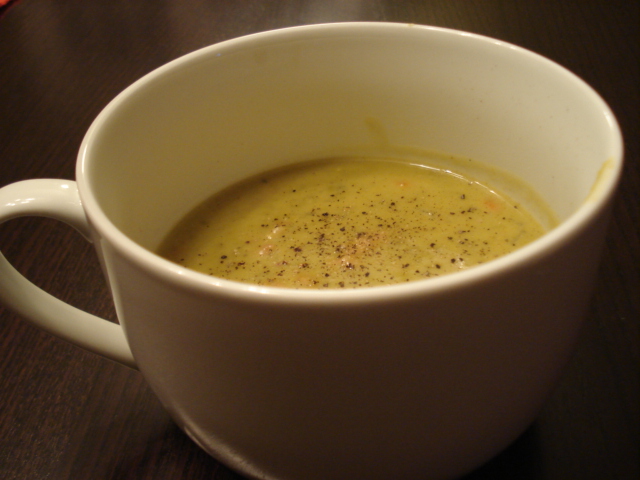 I thought the soup was good, but it wasn’t as amazing as the one I had at Crisp (a local restaurant) a few weeks ago. I think that’s because that one was 50% heavy cream

Ham “falling off the bone.” I’m not a huge meat eater, but this did taste good: 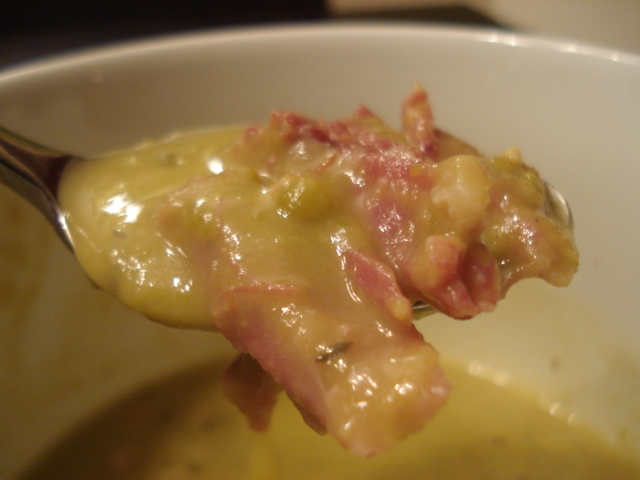 On the side I had another 2/3 serving of Kashis. 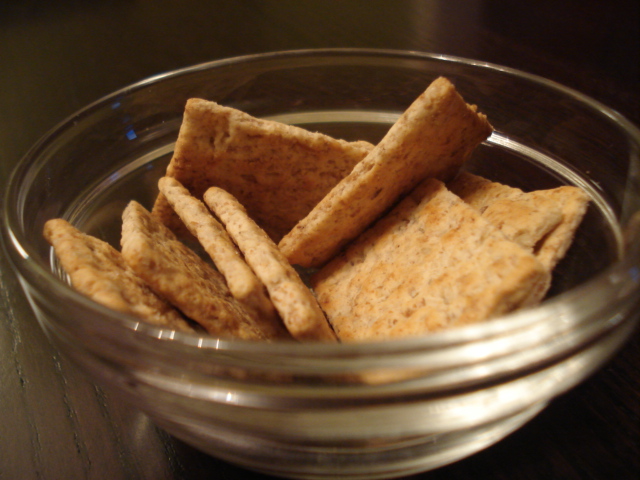 The absolute best thing about this meal (wine included) was that when I was through, my palate was completely satisfied. The husband broke out the chocolates, but my mouth was just so happy that I didn’t need one to fill any voids in flavor. 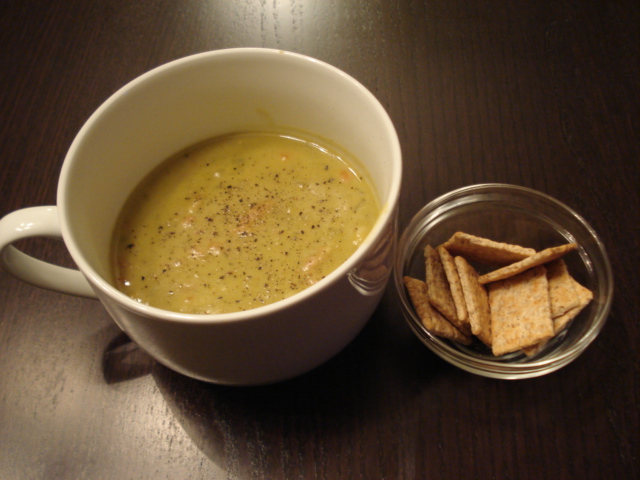 I packaged up the leftovers into four portions: one big, one small for eating for lunch in the next day or so and one big and one small to freeze for later. Guess who gets the big and who gets the small?! 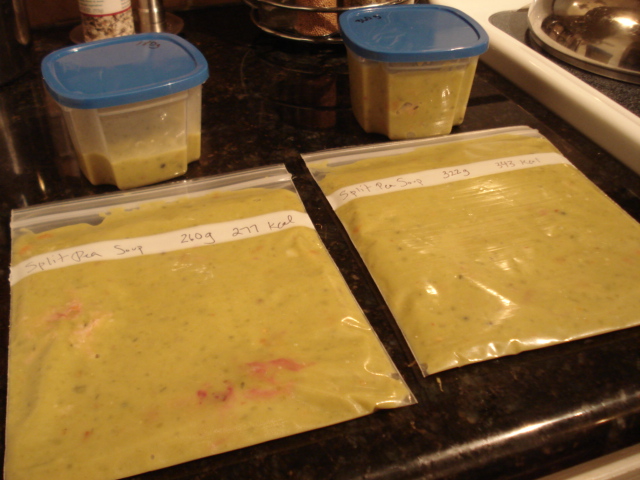 I also labeled them with the grams and calories, FYI for when I eat it next time. We figured the nutritional info out by weighing the pot before we started cooking and then weight pot + soup after. It was about 2800 grams total, which actually came out to about a calorie per gram when I entered the ingredients in my CalorieKing journal.

And the best part of tonight??!! Tomorrow is SATURDAY and I have no plans!!!!!!!

And there’s a crazy thunderstorm outside in the middle of December! I’m off to read in bed……zzzzzzzz