You are here: Home / Lifestyle / The Mile High Blog

It’s been quite a long day – and it’s not over yet! We were up at 5:45 this morning to take quick showers and head to the airport via. subway after a 3 block walk to the station. We arrived, only to find the station CLOSED on Sunday mornings! Of ALL the helpful information we received in planning for this conference, I am shocked that no one mentioned this small yet extremely important bit of information about San Francisco public transportation! Luckily there was a taxi waiting nearby to catch tourists like us, but the fare was 4x what it would have been. At least it was a quick and easy ride in.

Once at the airport, we scouted out the breakfast options. Sarah had given me a packet of Kashi GoLean oatmeal on Friday along with the tip that she often carries packets of oatmeal with her when she travels for instant breakfasts. I happened to have a packet of plain instant oatmeal in my suitcase, but of course upgraded to her selection for Sunday’s travels. Thanks again Sarah! 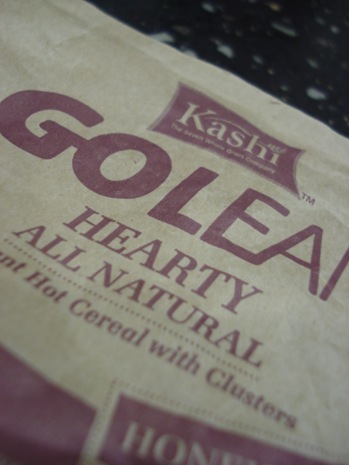 I got all settled with my oatmeal packet , hot water (to be turned into tea after I borrowed a half cup), a banana, and a yogurt – 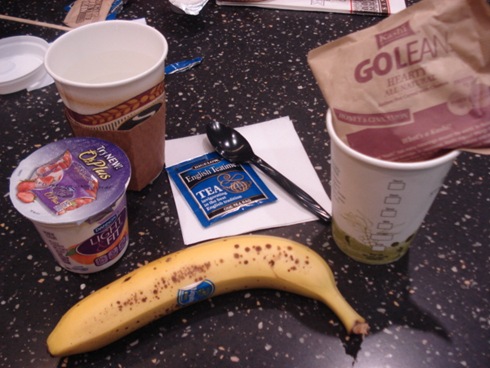 How lucky was I!! So I saved the packet and got in line for a steaming bowl of hot oatmeal!

My toppings included a tsp of brown sugar , a tbsp of raisins and 2% milk , which I saw a woman pour over her oats and decided to do the same. I also sliced in my banana . The oats were great – just plain old steel cut oats in a commercial crockpot. 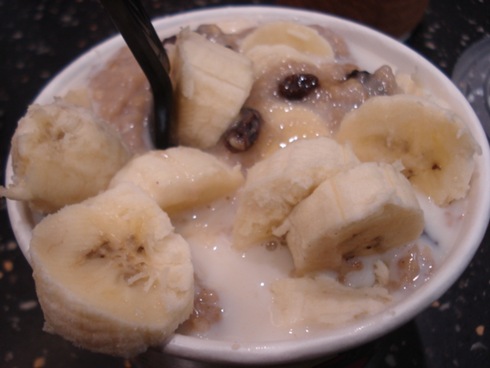 I was [ this close ] to eating my yogurt when I saw the menu, so I had already opened it! I didn’t need it plus my oats, so my mom and I devised this handy tea cup carrying case with napkin padding and ate it for a snack around 10:00 – 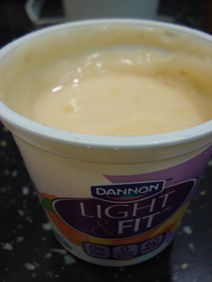 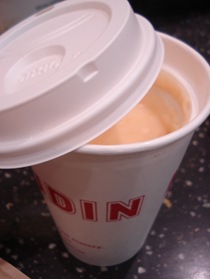 We got ON the plane at 9:30 and back off at 10:30. Maintenance problem . The air conditioning had some kind of leak. How ironic is it this I spent the entire flight wrapped in a blanket because the plane was so damn cold. What’s with the obsession with AC in the summer. We’re having an energy crisis in the world – couldn’t we turn the temperature up just a little?? We were told the plane would be repaired by 12:30…. 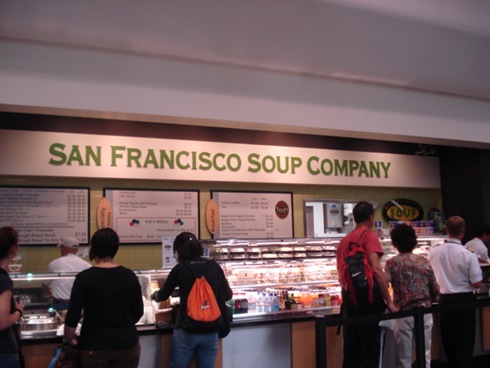 But in the meantime we had a fabulous lunch! We had originally had only a 40 minute layover in Chicago so we bought a spinach wrap to share on the plane along with a side salad and an apple . Having gotten breakfast at the SF Soup Company, I was really craving soup over a cold sandwich. So in that sense, the layover was a treat to a hot soup lunch!

I ordered a cup of low-fat Southwestern Corn Chowder… 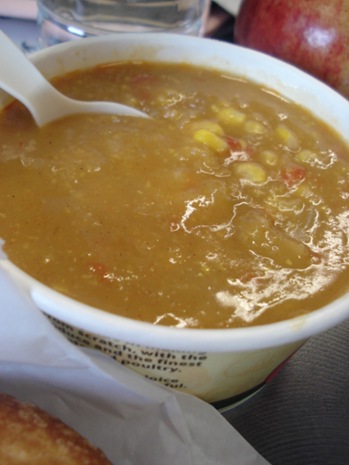 Which came with a yummy sourdough roll! 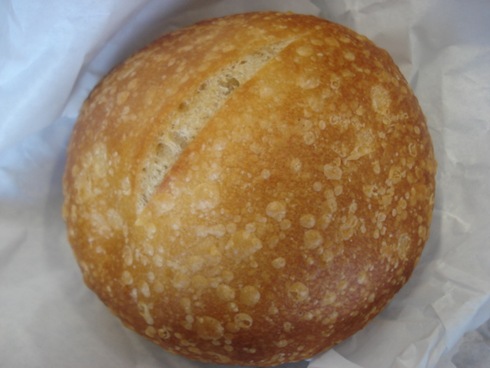 Plus my little side salad for some green chew – 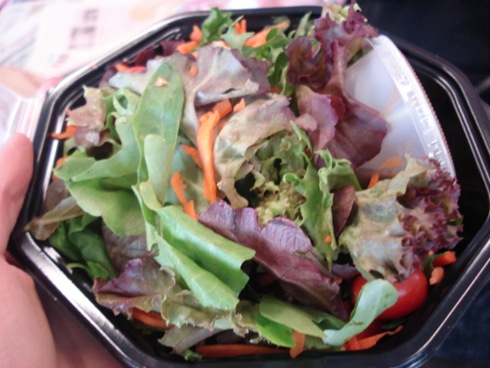 (I decided to save the apple for later)

All set up in the airport, I had to tell a few people giving me funny looks that I was a food blogger – and even showed a man the site 🙂 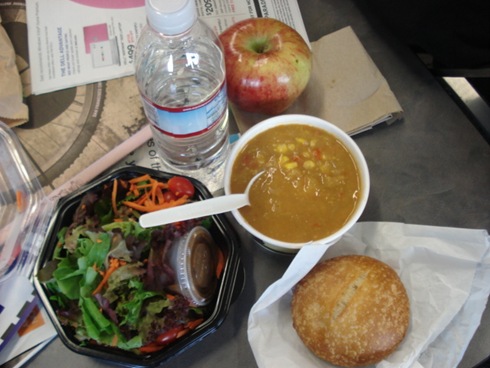 On The Ground – With More Delays!

CROSS YOUR FINGERS that we make it home tonight! Our next flight (Chicago to Raleigh) is delayed by 2 hours . It board says we’re leaving around 11pm. My mom has her first day of class (as a teacher, not a student) in the morning so she MUST be there. I had planned to drive home to the husband tonight, but I think I’m going to wait until the morning. His brother is visiting so at least he won’t be lonely.

I had a glass of OJ on the plane (no photo due to claustrophobic seating) to tide me over until we arrived in Chicago to hopefully grab something quick while running to our gate. Upon discovering the delay, we were relieved to be able to have a meal and not rely on apples and LaraBars for dinner (it’s harder to plan the return trip without a kitchen or grocery store to pack meals).

It had been almost 6 hours since lunch, and all I wanted was something warm. I debated pizza or a panini but settled on a Black Bean + Goat Cheese "Naked" Burrito from Burrito Beach ! Not something I would normally order but it totally hit the spot tonight. It was quite good:

And a tortilla on the side. I know these 13" tortillas are upwards of 300 calories so I tore it in half and threw away the rest before I could "accidentally" eat the whole thing. 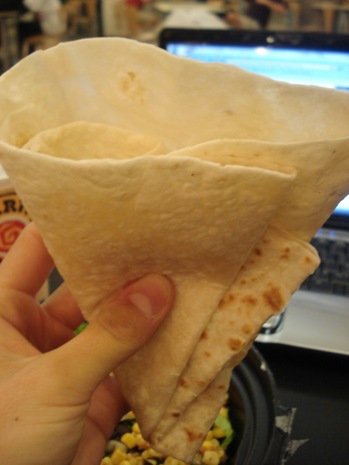 I also got a Diet Dr. Pepper to entertain my mouth. Water seemed too boring (and considering we have a late night ahead, caffeine might not hurt either). 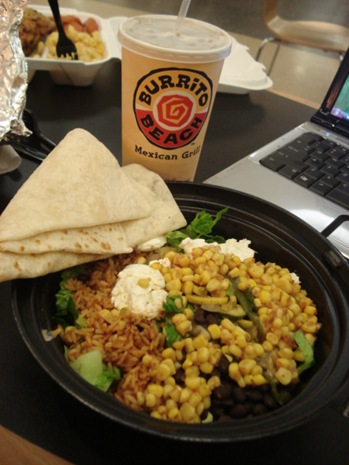 Mom proclaimed she was too tired to eat healthy and was starving and got exactly what she was craving: chicken, mac n cheese, a cornbread muffin + sweet potatoes. She wanted to be on the blog too 🙂 (I think she ate it all, but she might have left some muffin). 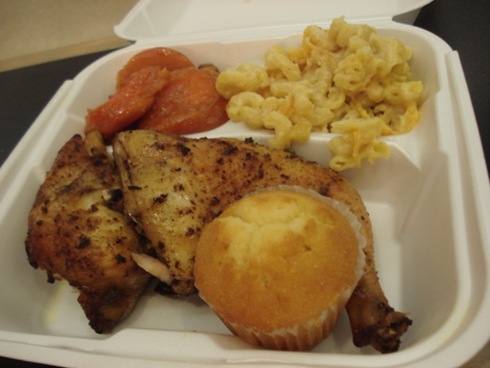 I’m so confused on what time it is here, there, and in CA. Hopefully tomorrow I’ll get things back to normal! I’ll be driving home to Charlotte in the morning (if we make it) and plan to start my day with banana PB oatmeal : )

One last question: do any of you Twitter? It was "all the rave" at BlogHer and I’m interested to see how it works 🙂 I’m KathEats (obviously!) if you’re looking for a new friend.

Update: Flight is now not scheduled to leave until 12:15. Buh.