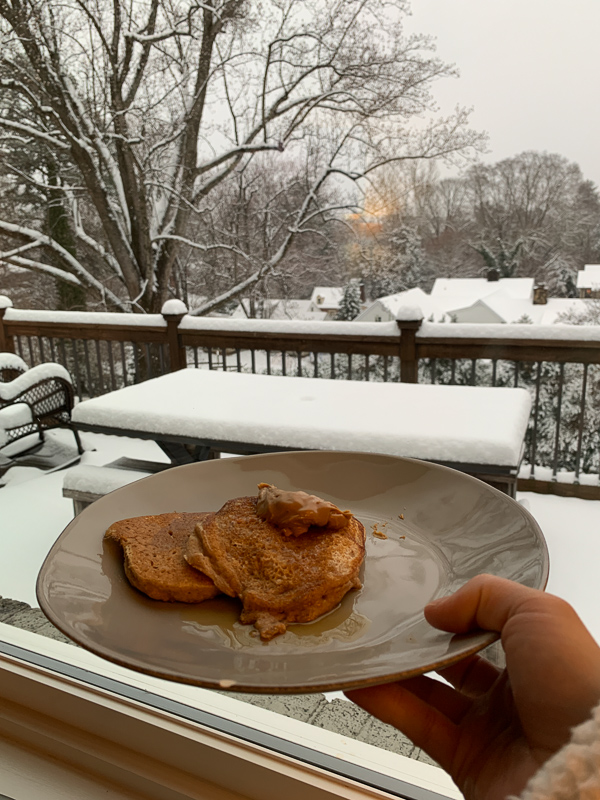 We woke up on Wednesday morning to a lovely blanket of snow. Unfortunately it was the worst kind of snow day because shortly after sunrise the precipitation switched to a mix of rain, sleet and freezing rain, so it was too gross out to do any fun sledding. I’m hoping this was our last snow day of the year because yesterday was 60 degrees and spring like outside, but we will probably get 2 feet in March. That’s how this season goes.

They actually called off school the night before, so I found it funny when Mazen bounded into my room at 6:30 on Wednesday morning asking if he had school. I had forgotten to tell him the night before (although I turned off his alarm clock!) I said in a mean voice: “You’re late for the school bus!” and then told him I was joking. He cheered. 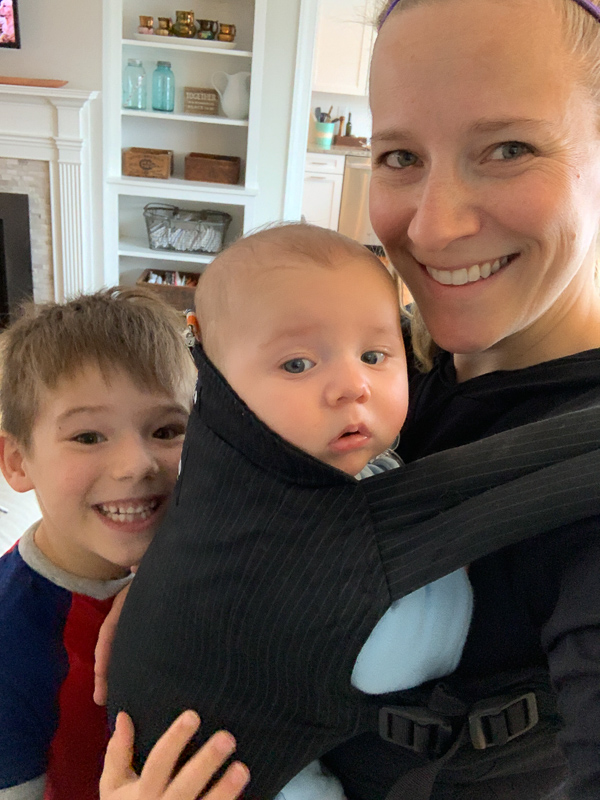 And lucky for us, Thomas was downstairs making Great Harvest pancakes! (He did not have a snow day but shared Mazen’s excitement for a lazy morning.)

We made fluffy slime (with shaving cream) for an activity using glow-in-the-dark glue. If you saw my story on Instagram, it was really cool! 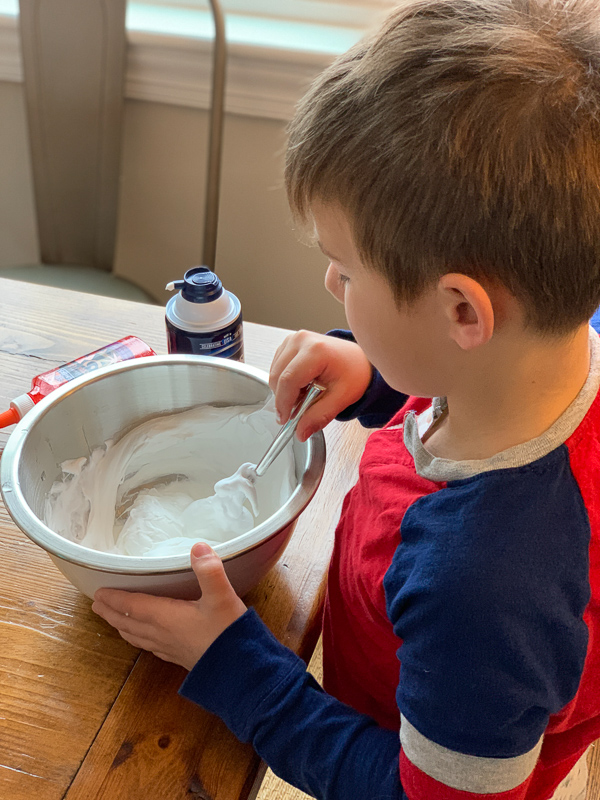 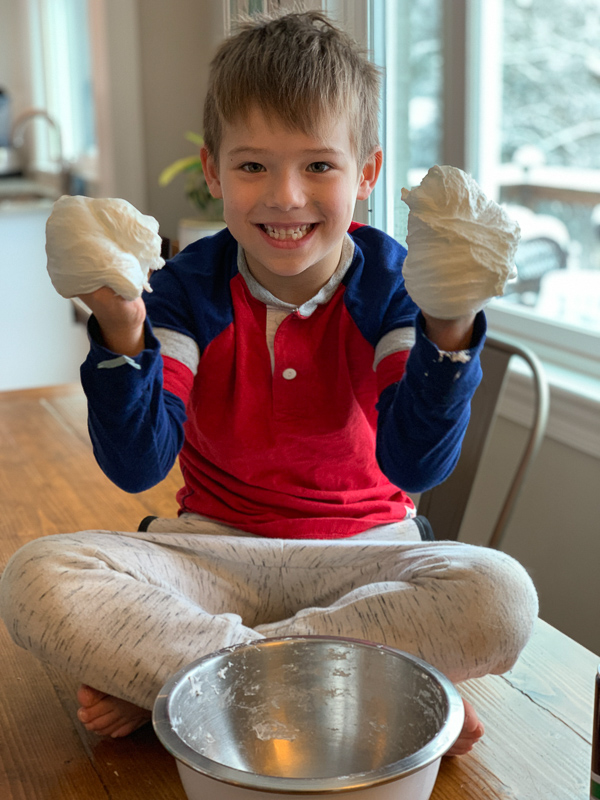 Mazey helped me put Birch down for a nap. We left him in the crib but he started to cry and before I could jump back up Mazen ran in there and started holding his hand, singing, and showing Birch stuffed animals. It was the sweetest thing to watch! 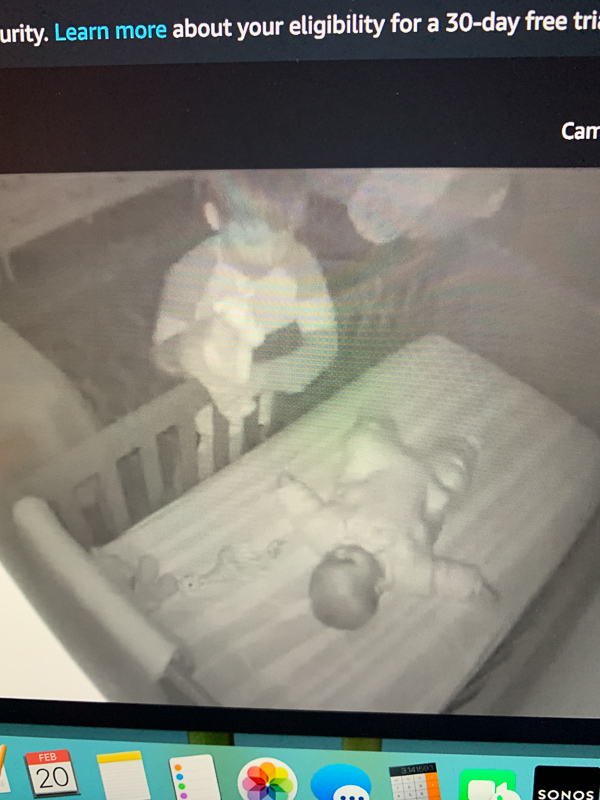 I got in a shower during naptime. This is my new favorite sweatshirt from Stitch Fix. It zips down, so it’s breastfeeding friendly and has pockets! Also neutral gray = wardrobe colors. 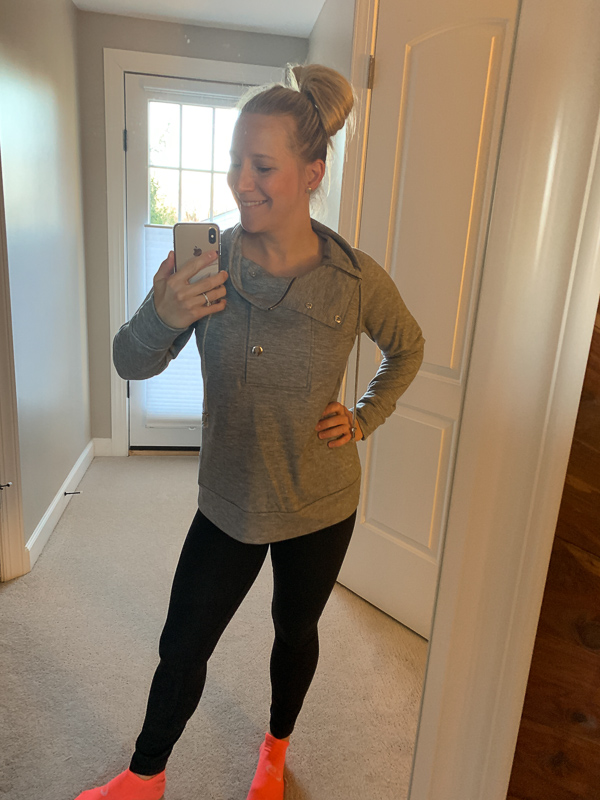 Thomas came back home for lunch, and we made a double batch of tuna salad. I have just recently discovered the totally addictive Stacy’s Pita Chips. I know other people have been devouring them for years. I don’t know why I’m suddenly obsessed! They are perfect for scooping up tuna or egg salad. Also: clementines are perfection. I’m not sure I want to ever eat (or peel) any other kind of orange. 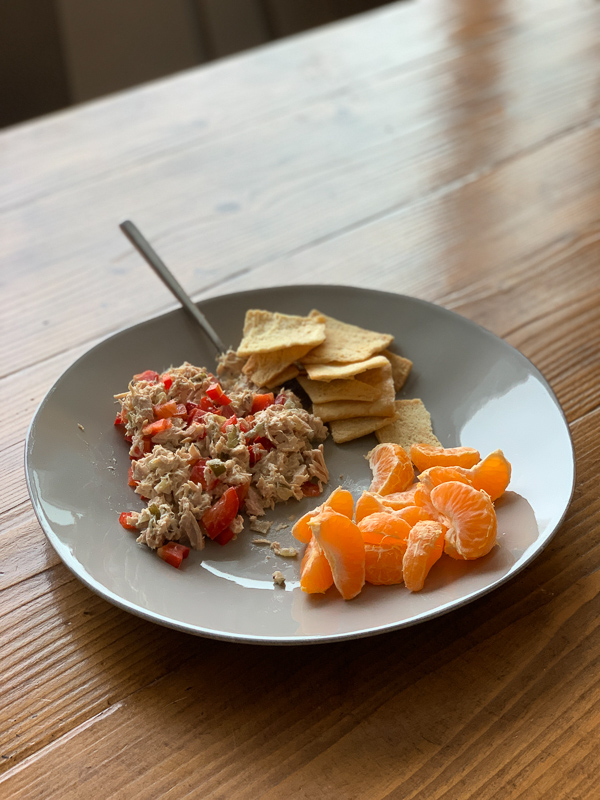 Look what arrived yesterday! I felt so bad for the nice delivery guys who carried this beast up the hill of my backyard, slipping on ice. But I was so glad that it was not delayed because assembly was scheduled for the next day. (FREE thanks to Amazon!!!) I’ll be sure to update you guys with a post on the new tread and how it compares when she’s all set up and I’ve given her a test ride! 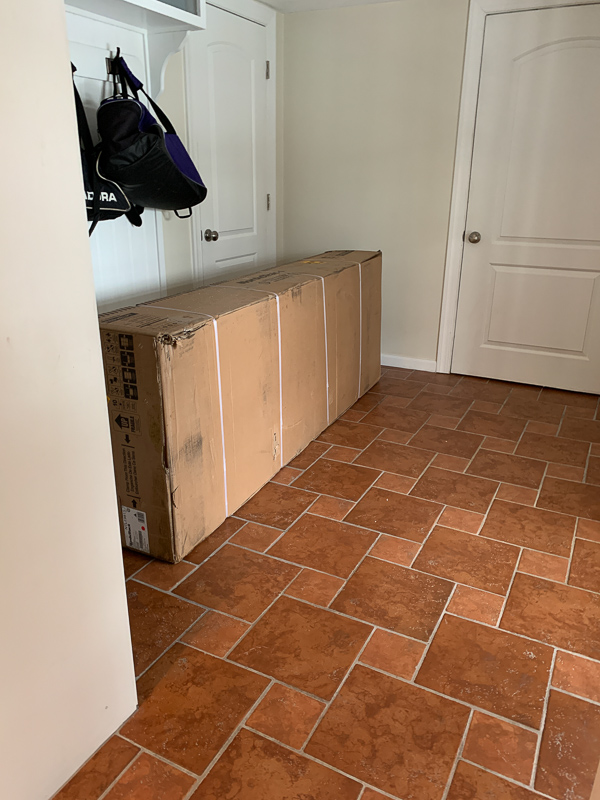 Other breakfasts this week have centered around Cinnamon Chip from Great Harvest! French toast with coconut butter and almond butter one day. 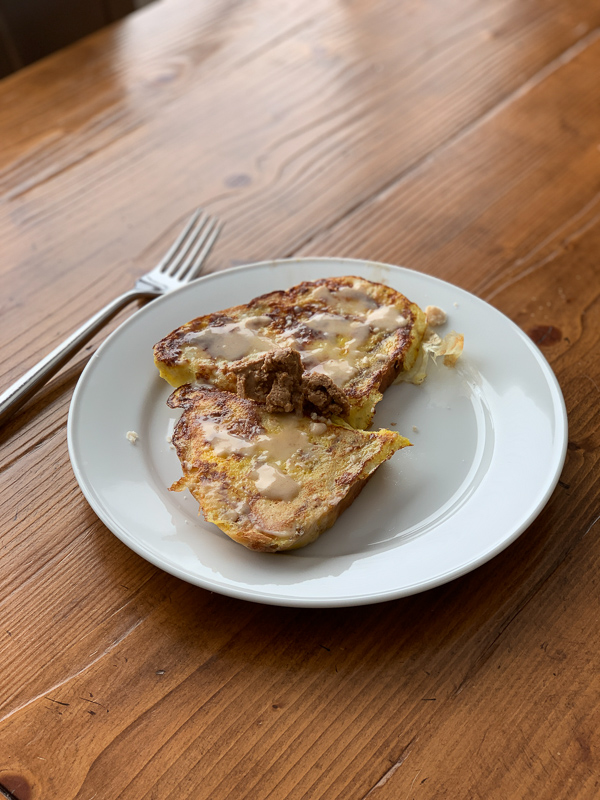 And toast with almond butter and a small leftover smoothie the next. 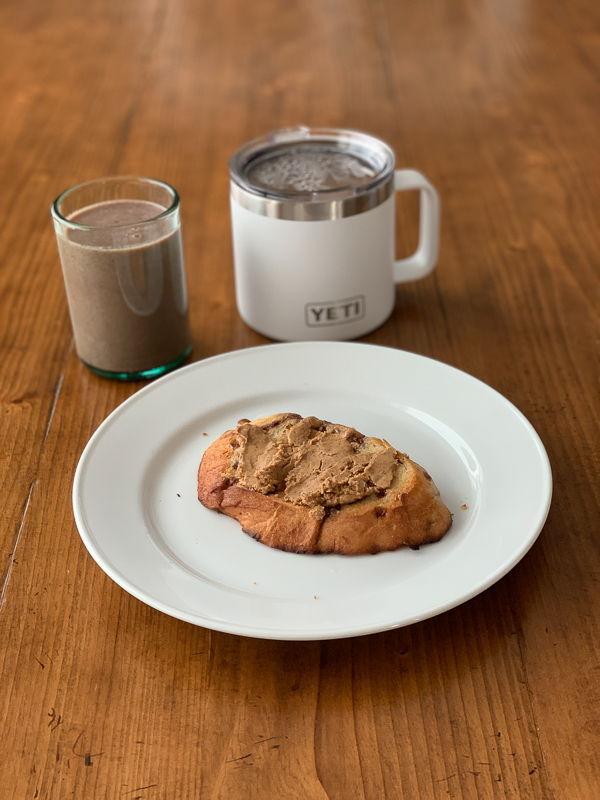 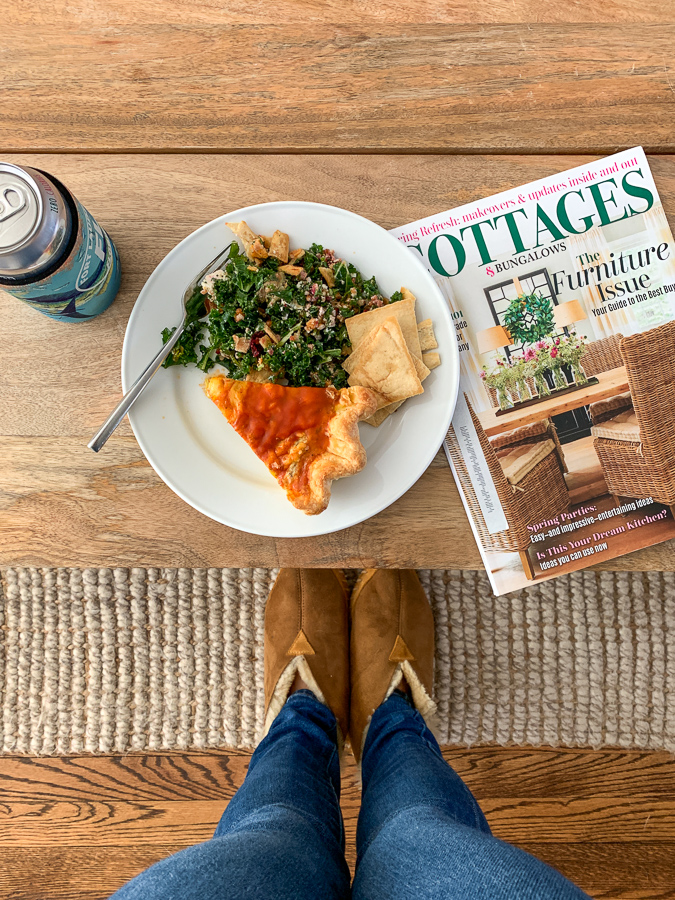 Thomas smoked a bunch of chicken on Sunday, and we’ve been eating the leftovers all week. Served on Sunday with asparagus and Instant Pot mac. 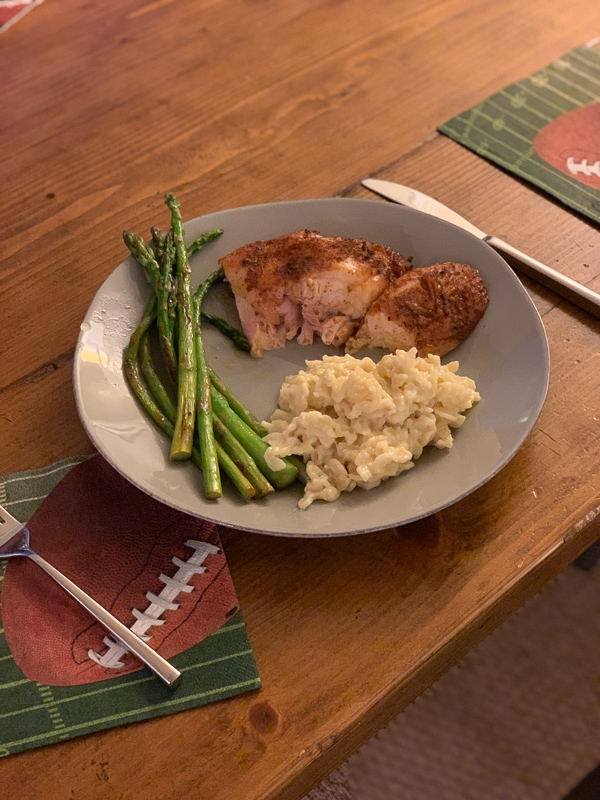 We had this salad on Tuesday with chicken, feta, chopped leftover cooked veggies, and pita chips (!!) 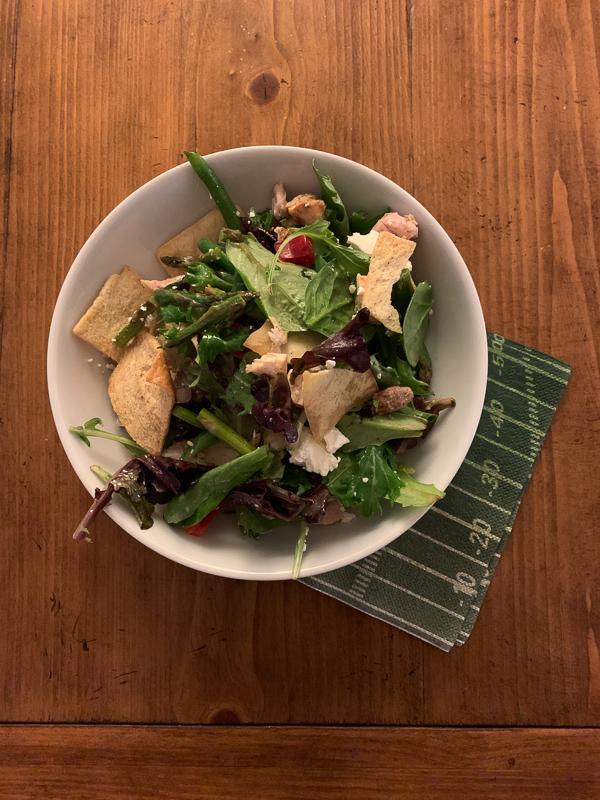 And this one on Thursday with kale, blue cheese, candied pecans, and peppers. 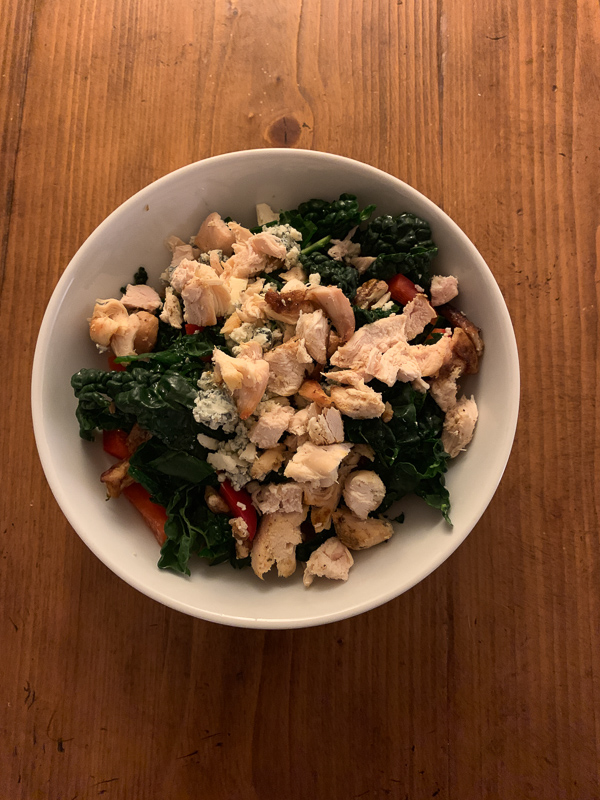 And on Wednesday, we had Mazen’s favorite: spaghetti with meat sauce! 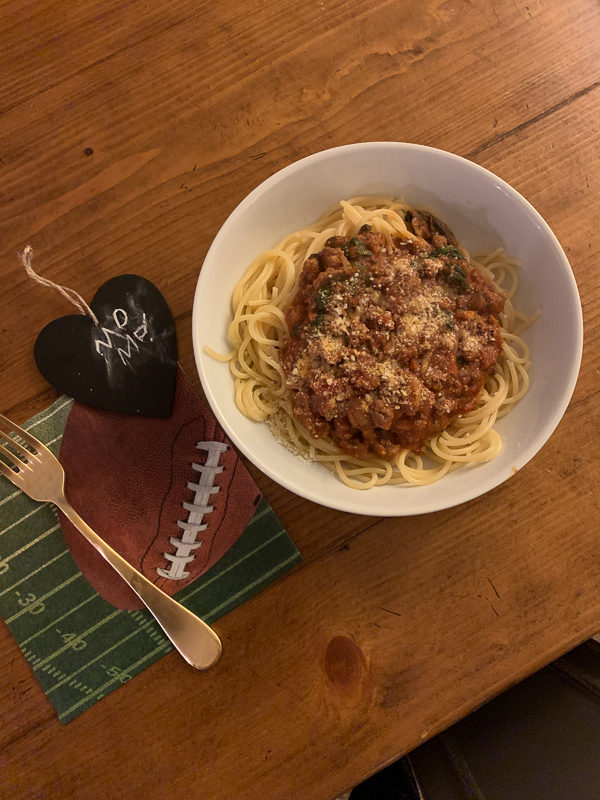 Have a great weekend everyone! We’re escaping on a little getaway!