You are here: Home / Lifestyle / Signs Of Summer

So many wonderful signs that summer is |thisclose| from being finally here.

Honeysuckle, wood chips, charcoal, freshly cut grass, magnolia tree. Blooming flowers. 90*. Today felt just like a day in the summertime when I was little, and I had such a blast playing!

Around noon I made a lite lunch before my 2PM yoga class. I initially decided on a spinach salad to get in some greens. But then I decided in salad form or smoothie form, spinach is spinach. And smoothies are so much more fun to eat!

SIAYC – Smoothie in a yogurt container!! 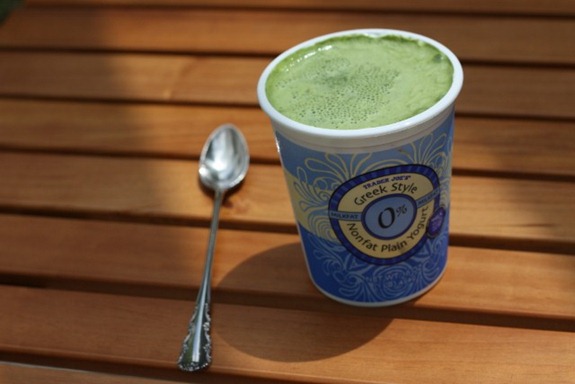 There was about half a cup of yogurt left in the container. Rather than blending it into the smoothie, I left it on the bottom for scooping. So much fun! 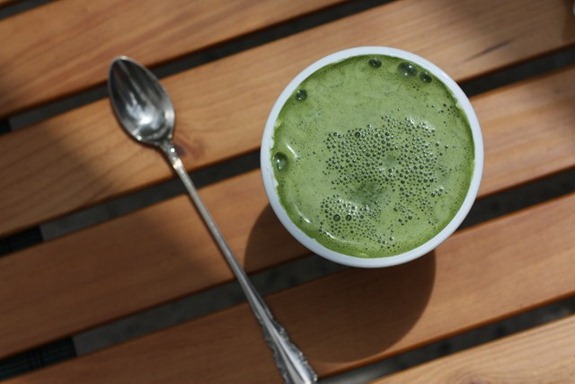 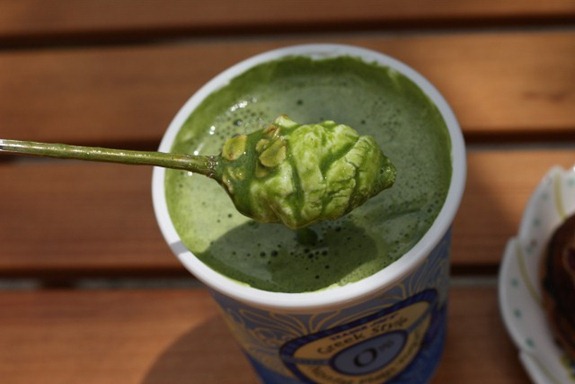 –> You know I put a little sunken granola in there!! 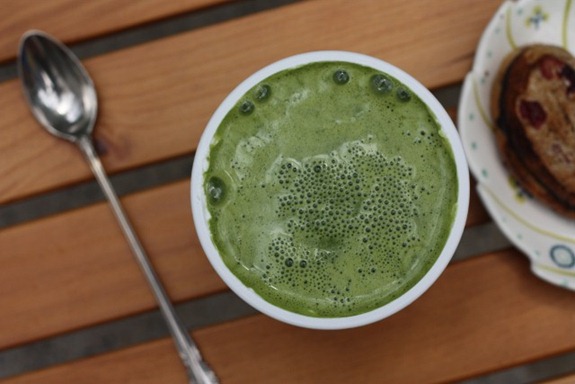 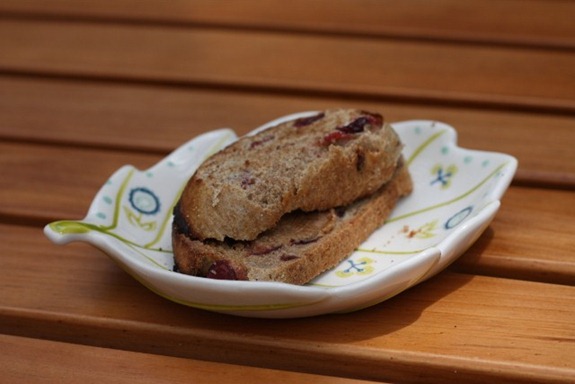 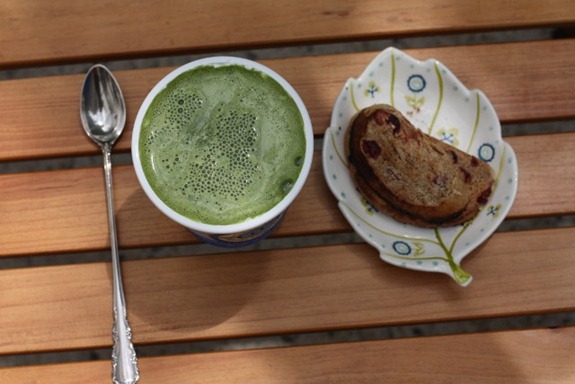 And for dessert, BOOK! 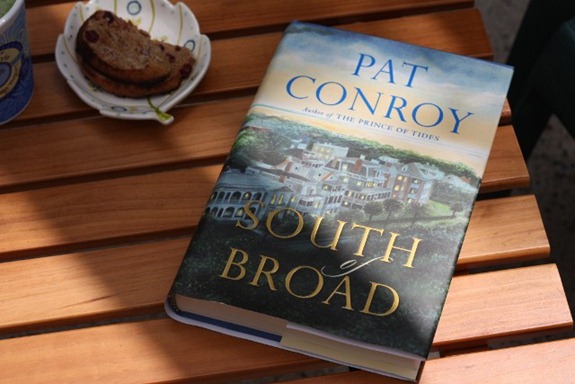 Pure bliss. [I DID shower today, BTW! I just didn’t wash my hair. I like to sweat clean sweat at yoga!] 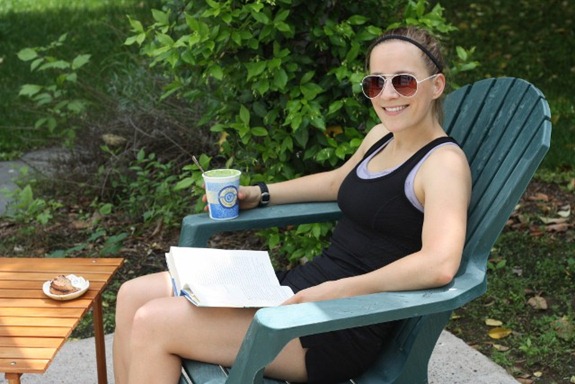 At 1PM Matt and I packed up two VERY full backpacks and set out for Karen’s. Her condo is about 6 miles away – mostly via sidewalks. But it takes about 40 minutes to get there with some stoplights. My yoga studio is just A BLOCK from Karen’s! So the plan was to drop Matt off at Karen’s and I went on to yoga and then join them after. We had clothes for exercise, clothes for lounging by the pool, shower stuff AND dinner clothes all in our backpacks. And my giant camera, 2 lens (to photograph Karen’s condo for future rentings), and….my yoga gear?

We planned to strap my yoga mat and towel on the back of my bike (which has a rack) but when I went to get the towel it wasn’t there! Turns out I left both of them at the studio on Thursday when I was frazzled and misplaced my keys!! It was definitely convenient to not have to transport them today, but my towel obviously hadn’t been washed – eww. I left them at karen’s tonight and will get them before class on Thursday.

AN-NY-Ways, shortly after we left home Matt and I got in a bike accident – with each other!!

We were crossing by some policemen who were set up in a tent trafficking the Quail Hollow golf tournament, and we thought they had stopped traffic for us. I looked left and right – just to be sure – and I’m glad I did because there was a car coming. So I slammed on my breaks. Matt must have been looking the other way, because he didn’t see me stop and he rammed right into me with his bike. His dislocated – and then relocated – his shoulder (he’s fine) and his pointy handlebars went RIGHT into my butt. I’ve got two bad bruises – and an egg lump – on each cheek 🙁

Luckily we’re both OK (no flying over the handlebars or anything) but we sure rammed hard.

So continuing my epic post, I made it to yoga. Had a fabulous HOT class with Tanner. It’s pretty strange when you walk out into 90* weather and it feels cool compared to the 90*+ temp of the yoga class! I got into some new poses today (handstand!) and had a great class. Smells included lavender and stink from my dirty towel!

Karen had me try some of her new TJ’s Valencia PB. It was incredible. I miss the peanutty peanut butters since I’ve had a lot of specialty ones lately. I tried it on a half wasa cracker and had an apple I brought from home. 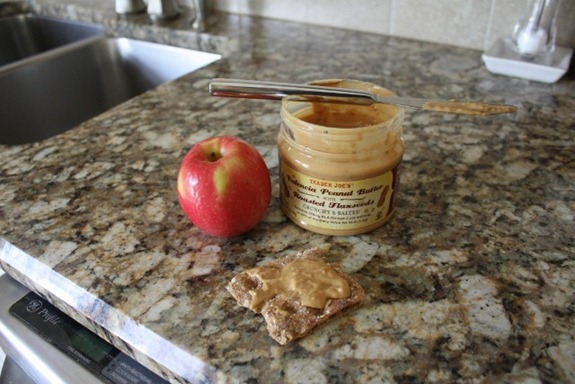 Then I went for a swim! 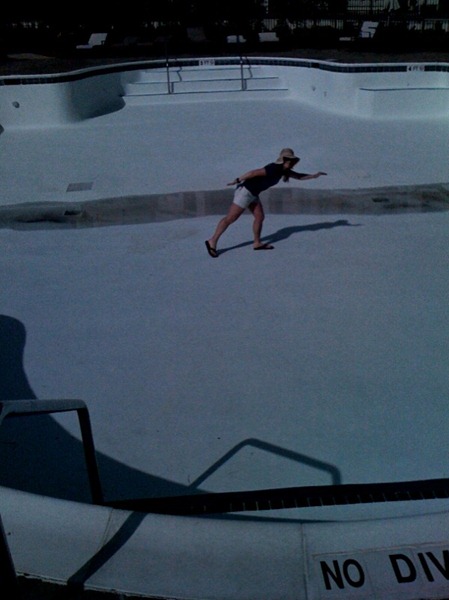 Surprisingly, there was NO WATER IN THE POOL! Instead we ended up just reading in the lounge chairs. It was so pleasant out there, reading in the sunny breeze. Water or no water! 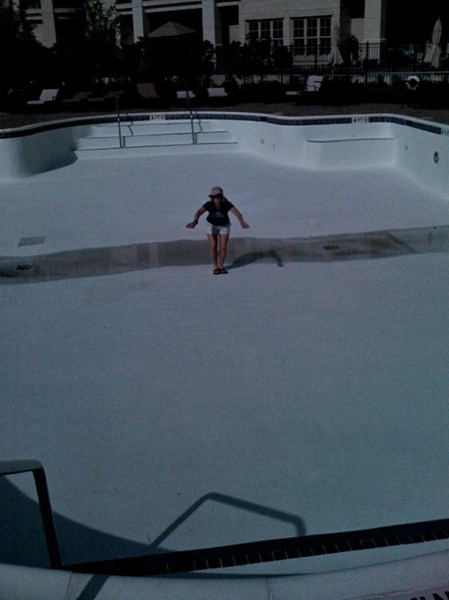 We came in at 6 and set to work on our dinner: Bison Burgers!! 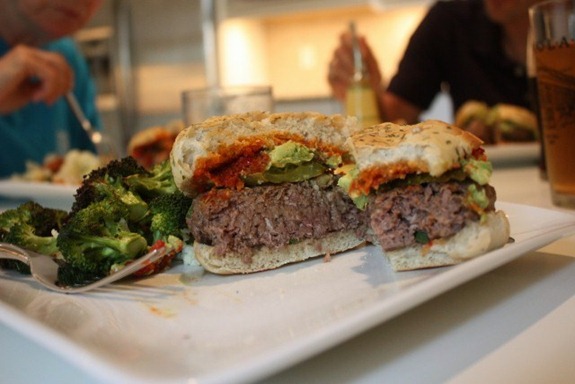 You know the days when you were little and it was summertime and hamburgers just tasted so damn good? Tonight was one of those nights. I’m really picky about my burgers. They have to be slightly rare, the right thickness, the right kind of meat (I actually really prefer grass-fed beef or bison – I can’t stand the taste of the ‘regular’ stuff anymore), the right ratio of toppings. And the right size. This was the best burger I’ve had in years!!! Every bite was perfect. 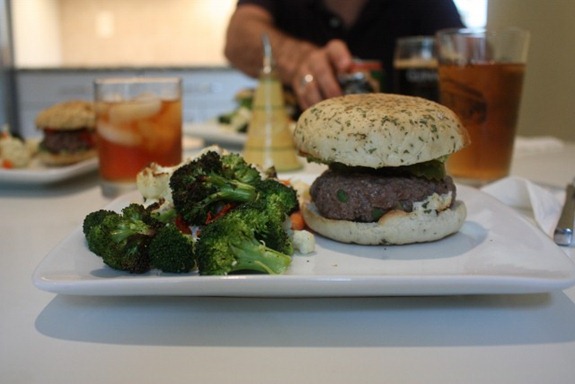 I made a mocktail with seltzer for cocktail hour 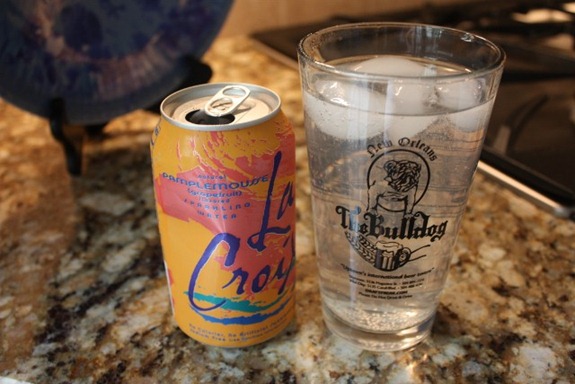 Karen mashed the bison (from Earthfare) with garlic, raw jalapeno and Worcestershire. They were SO GOOD!!! The jalapeno flavor came out much more than I would have guessed. 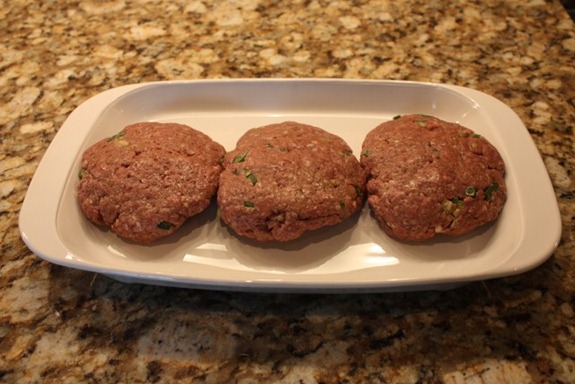 We Foremaned ’em since we didn’t have a grill. There’s nothing like a good burger smell! 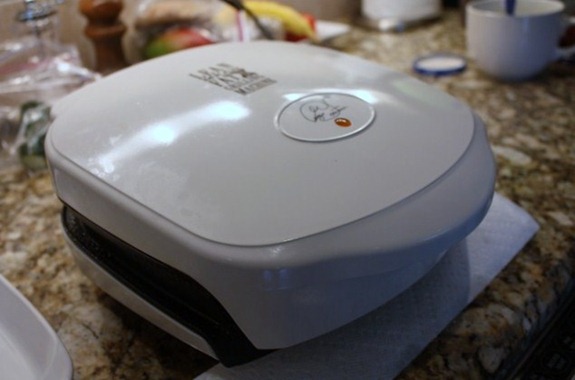 Karen also made sun-dried tomato pesto (she said she does not have a recipe – just make pesto like you would with basil but use SD tomatoes instead and add garlic, parm cheese, olive oil, etc.) 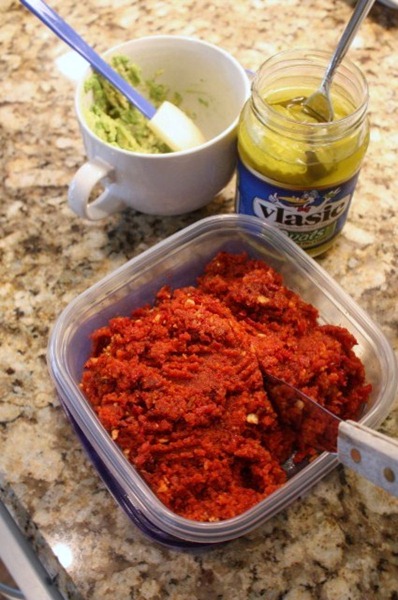 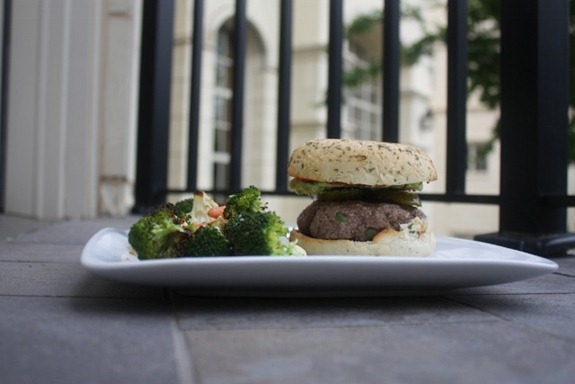 My burger was topped with pesto, avocado and pickle 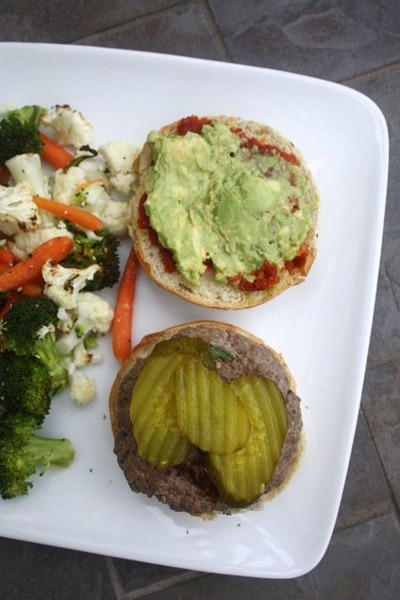 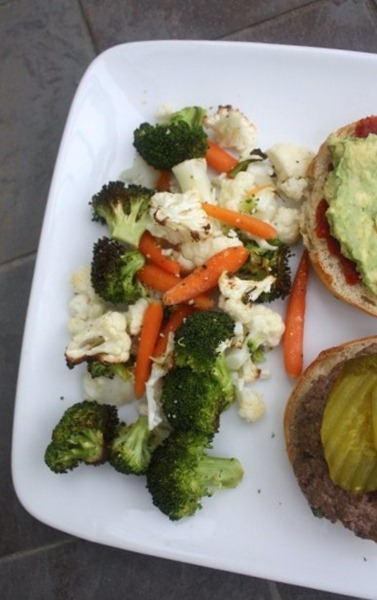 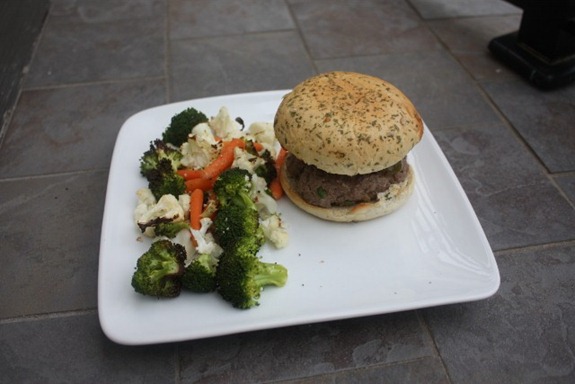 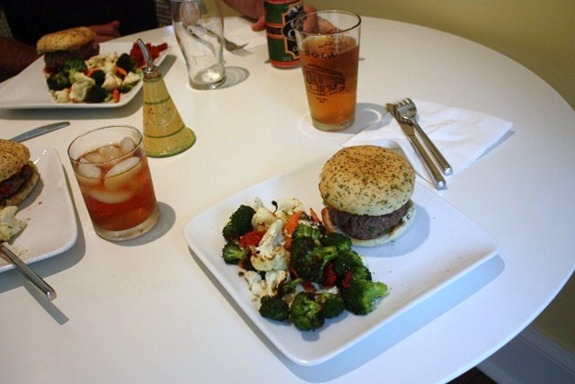 Matt is now into canned beers. 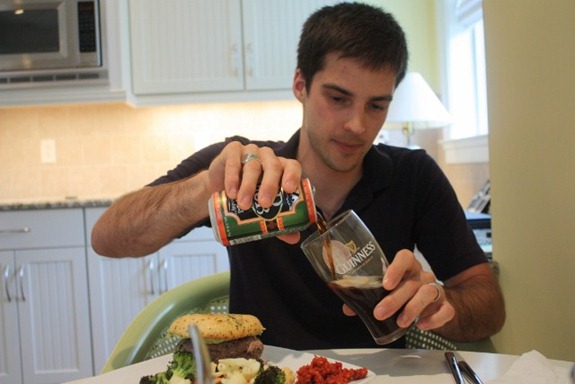 But he seems to have found a really good collection of them! This guy – Old Chub – was AMAZING. It was super sweet malty and reminded me of Maker’s Mark! 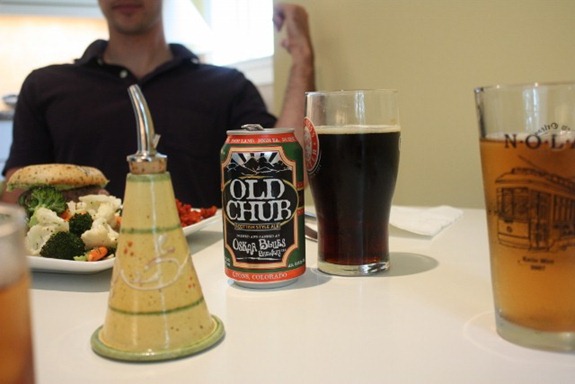 For dessert we had a few cubes of ‘loupe 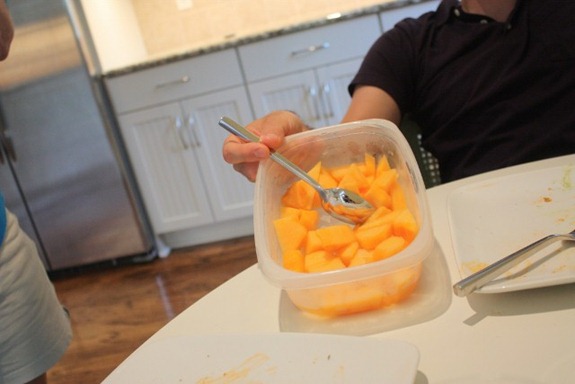 Try biking home 6 miles with a big burger in your belly! I had to loosen my backpack stomach strap!

But remember, biking is good for digestion