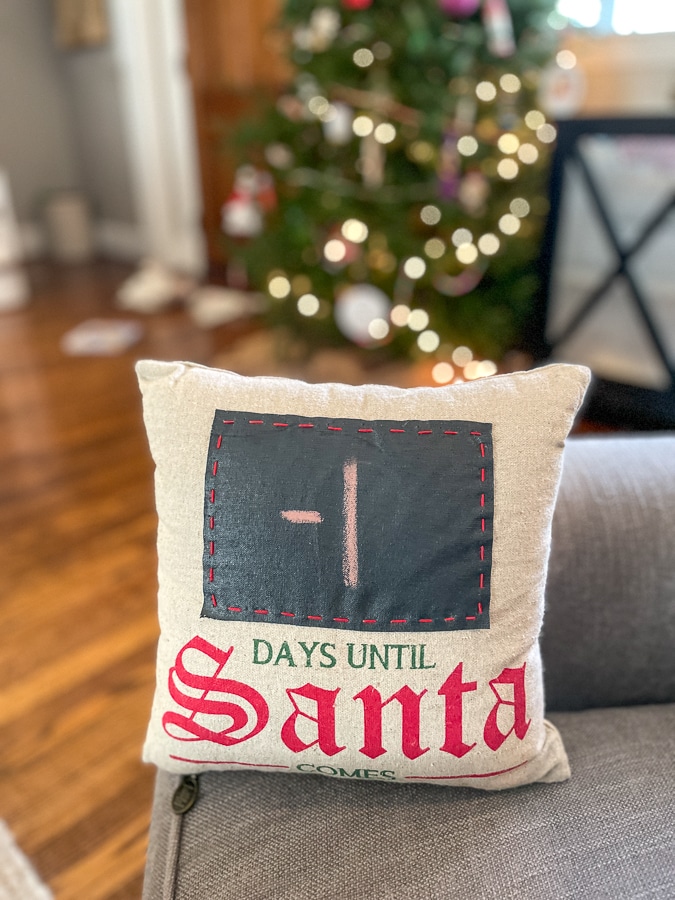 Despite the circumstances, Santa was good to us all this year. I’m glad he was able to get the vaccine early because it would have been super sad if he’d had to cancel Christmas too!

It rained all.day.long. (poured, actually) so we let the boys open a gift early!

They got this AirFort from us, which was a huge hit. It’s big enough for kids and adults to fit inside. You connect a 20″ box fan and the fort inflates with air in seconds. It sort of hovers on the ground. See it in action here. 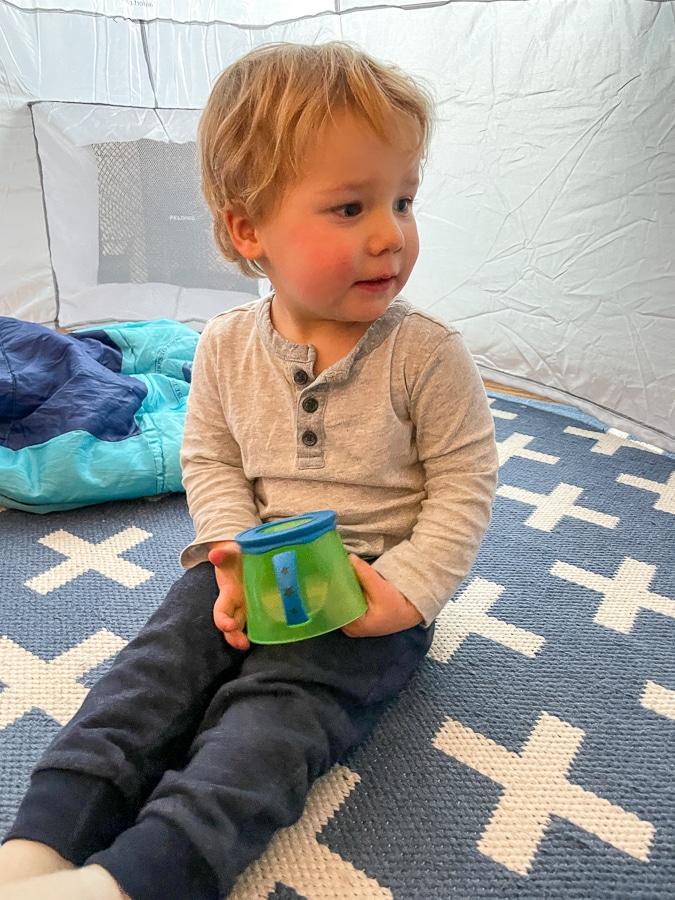 My hair has been in a ponytail about 99% of this year, so I was glad for an excuse to give it a curl! 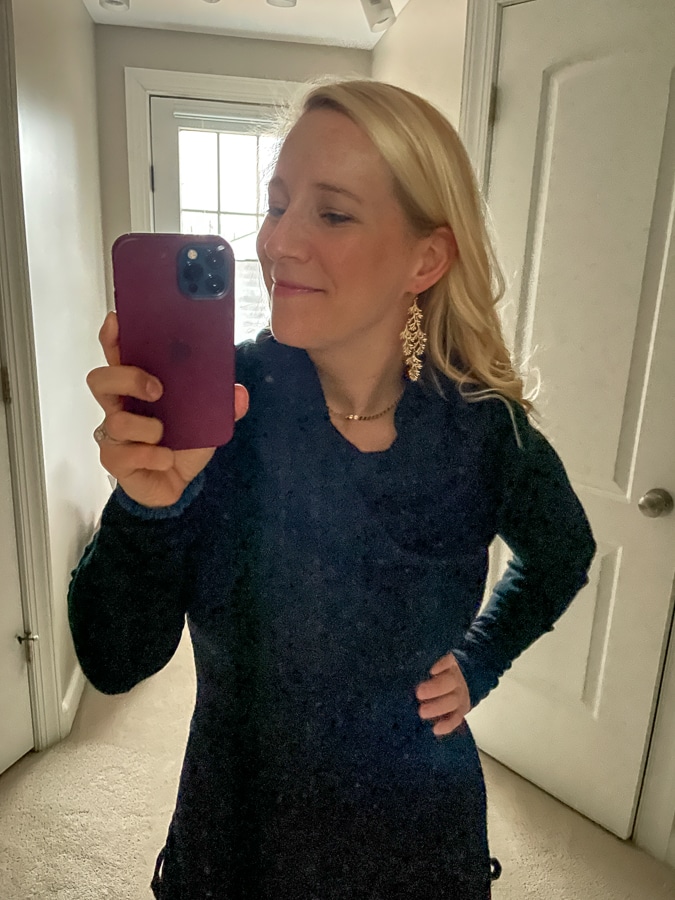 We enjoy a little party spread so Christmas would feel extra special. I made my mom’s Sherry Cheese Dip – a Christmas tradition. And some toothpick appetizers. (The boys ate rolls, crackers, shrimp, and cucumbers.)

We missed my family a lot this year, especially sharing Christmas with Avery and Emerson. I think this is the first Christmas in 38 years I haven’t seen them! 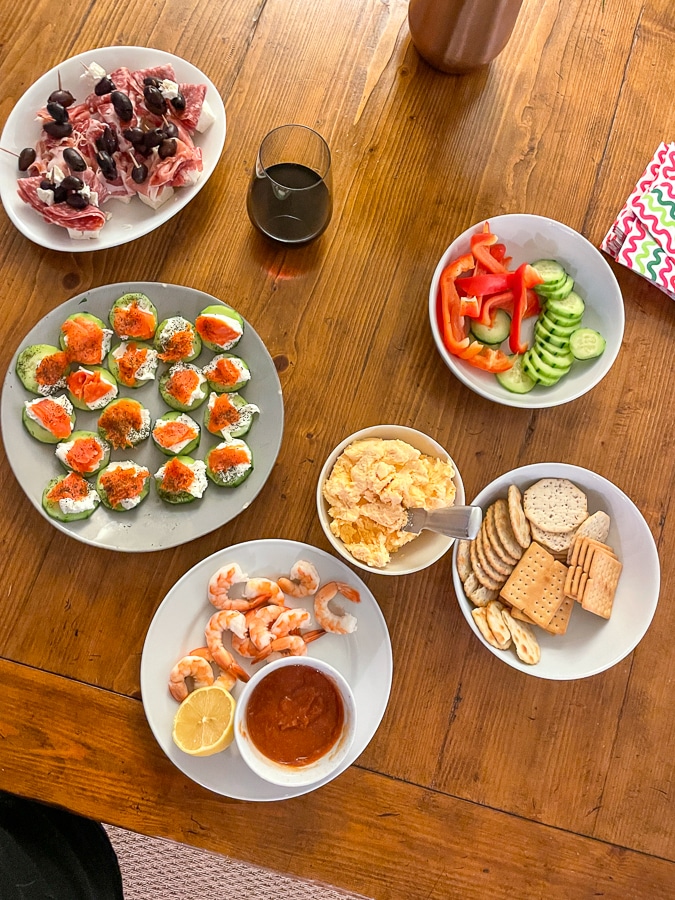 Santa left me a note with some deets about his delivery, so I could share them with you all. 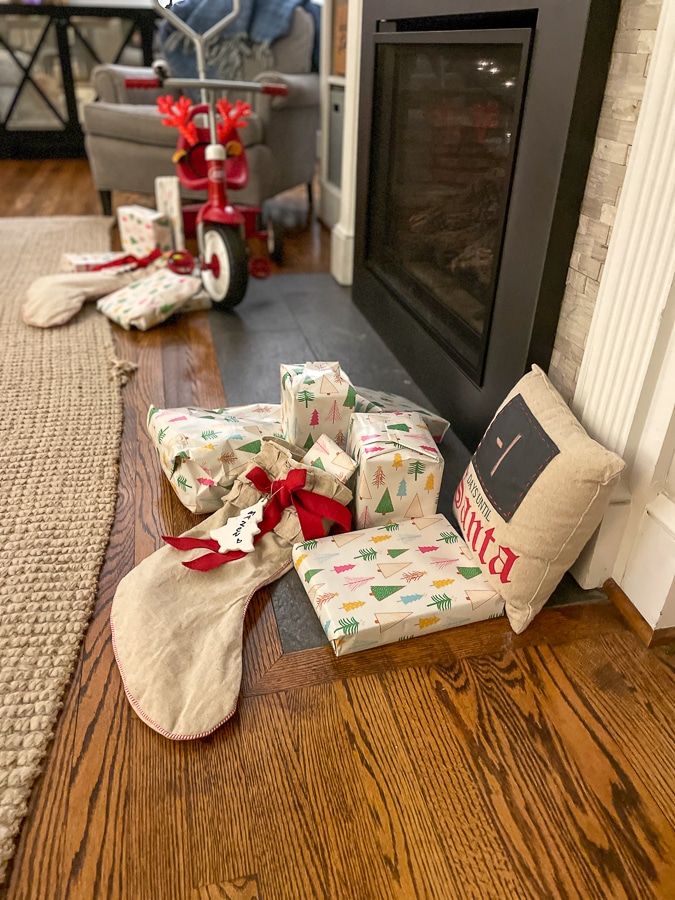 He said he came through the chimney in the basement because the top floor was blocked by the gas fireplace. He must have used the pillows as a landing pad. 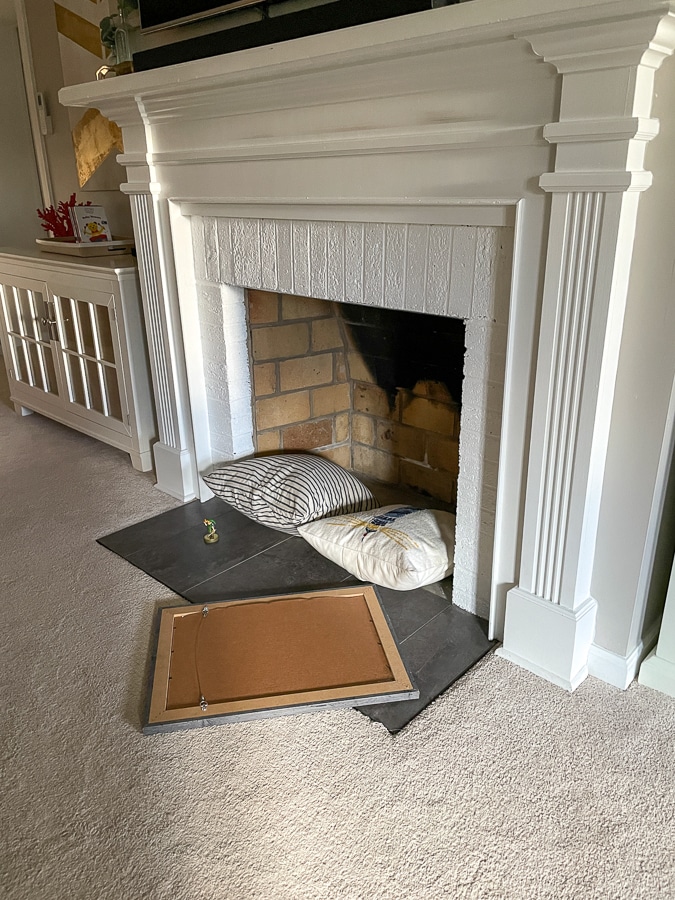 Santa brought the boys this Farmhouse Kitchen! He left it down in the mudroom because it was “too big for the chimney” he said. We also found bits of carrot down here. I wonder if a reindeer snuck in while he was putting the finishing touches on the assembly? 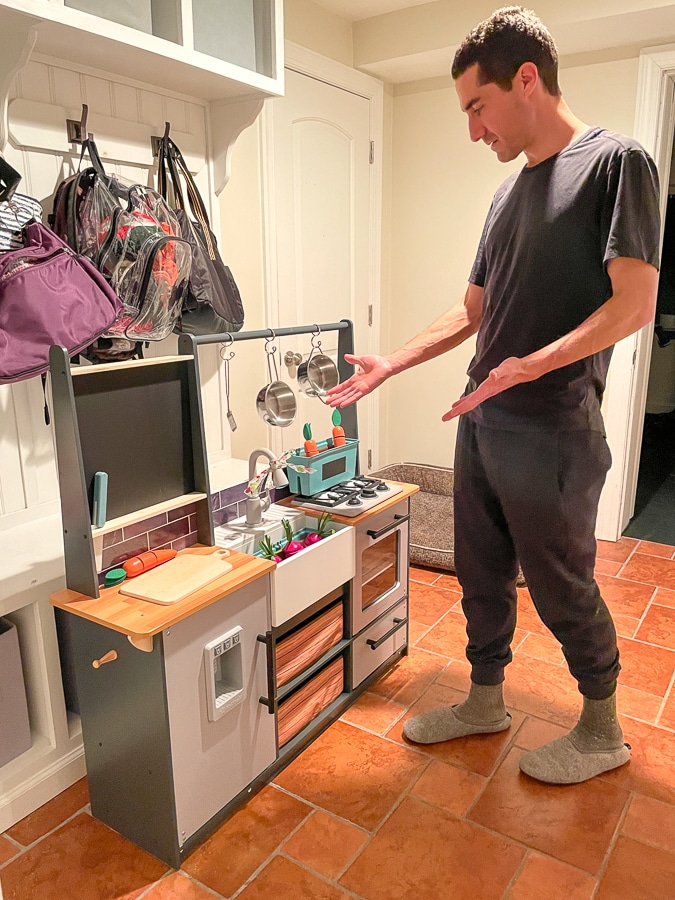 He also let me know in his note he was very proud to have found the Radio Flyer trike free in a buy nothing group. Santa believes in recycling whenever possible, ya know! It was in great condition – you would have thought the elves tightened every screw. 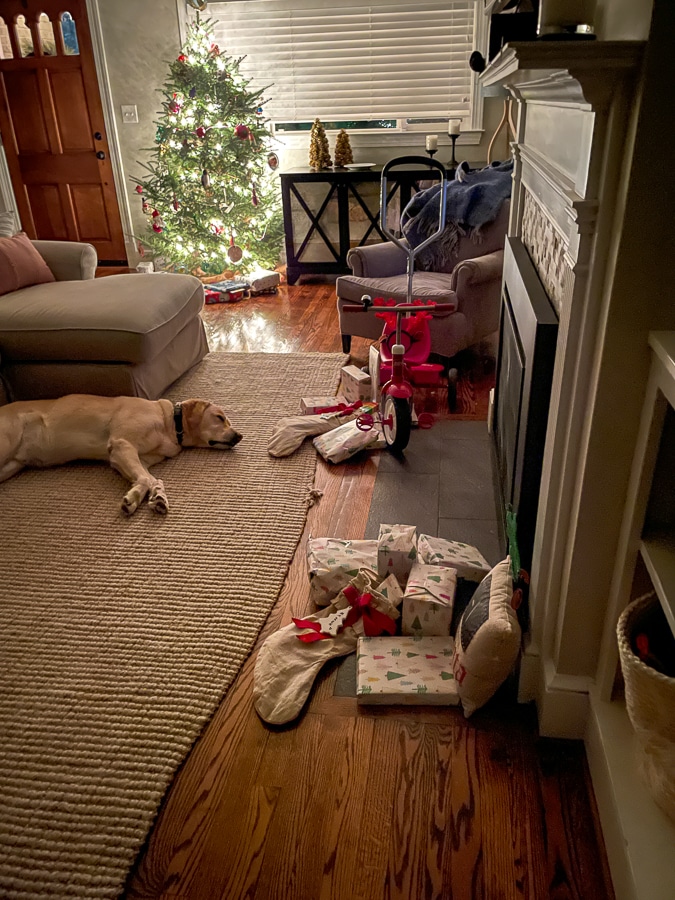 The boys slept until 7 (thank goodness they are good sleepers) and we enjoyed coffee + gifts all morning. 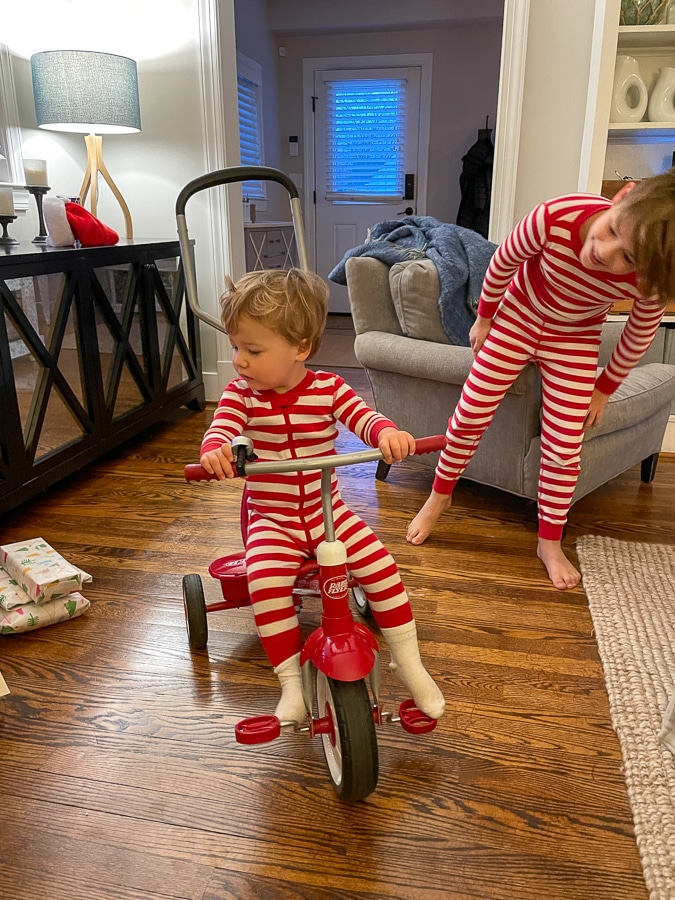 Despite his face, Birch was THRILLED with his “motorcycle” 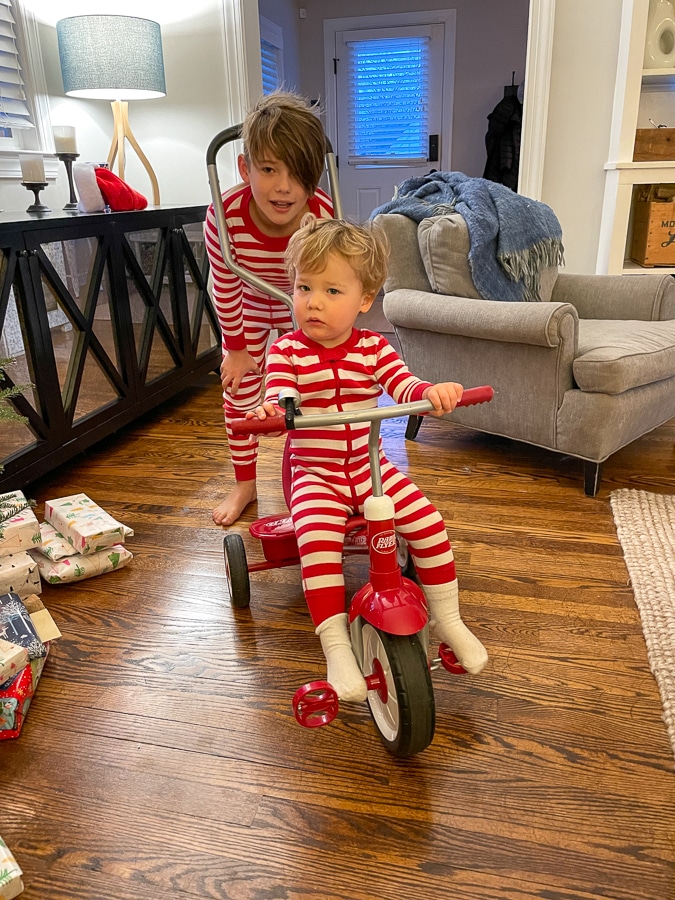 I was thrilled that the Christmas jammies fit him one more year! They were just a little short : ) 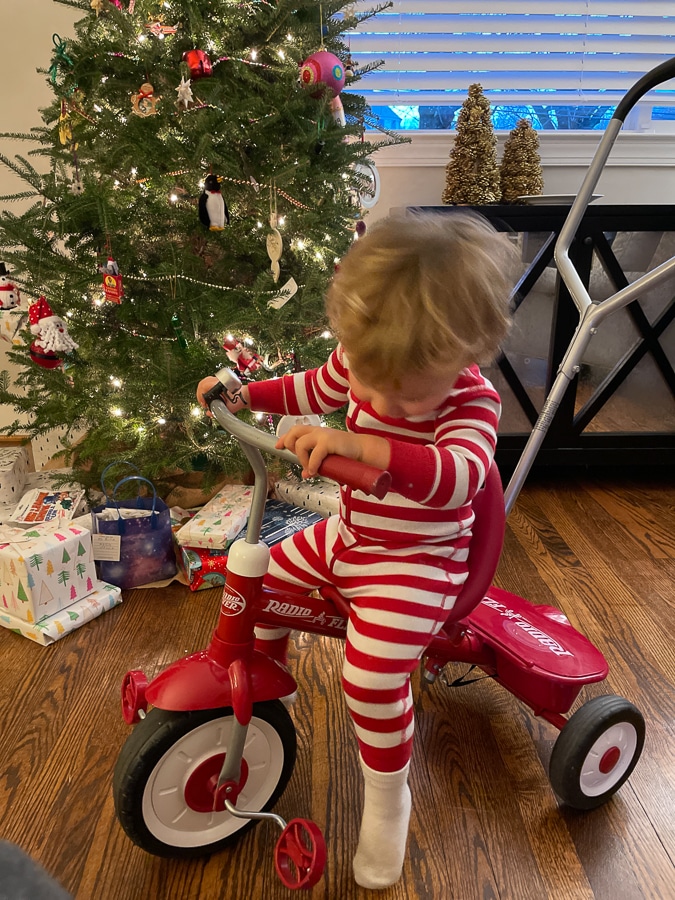 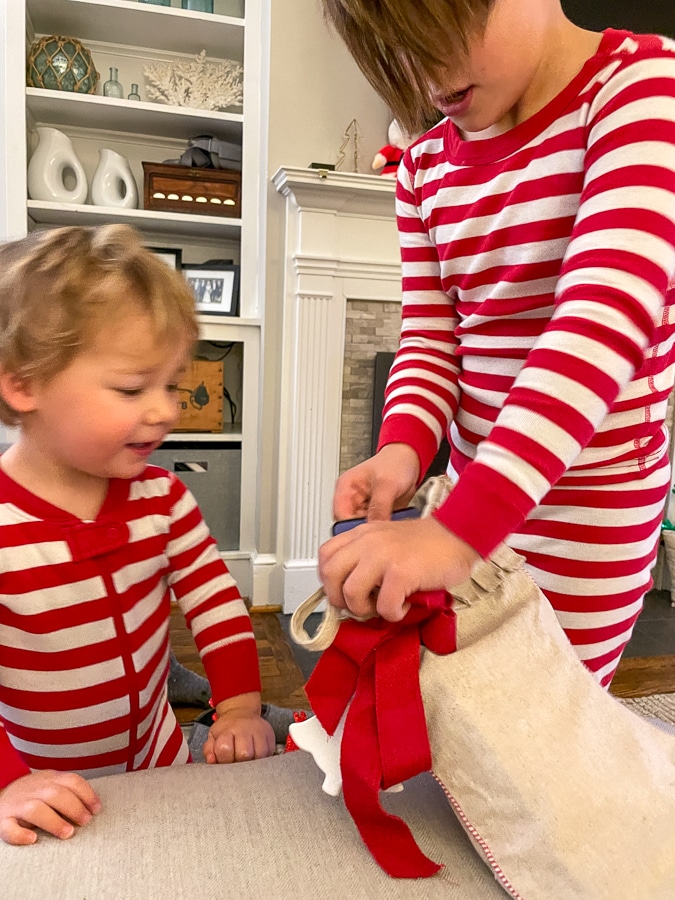 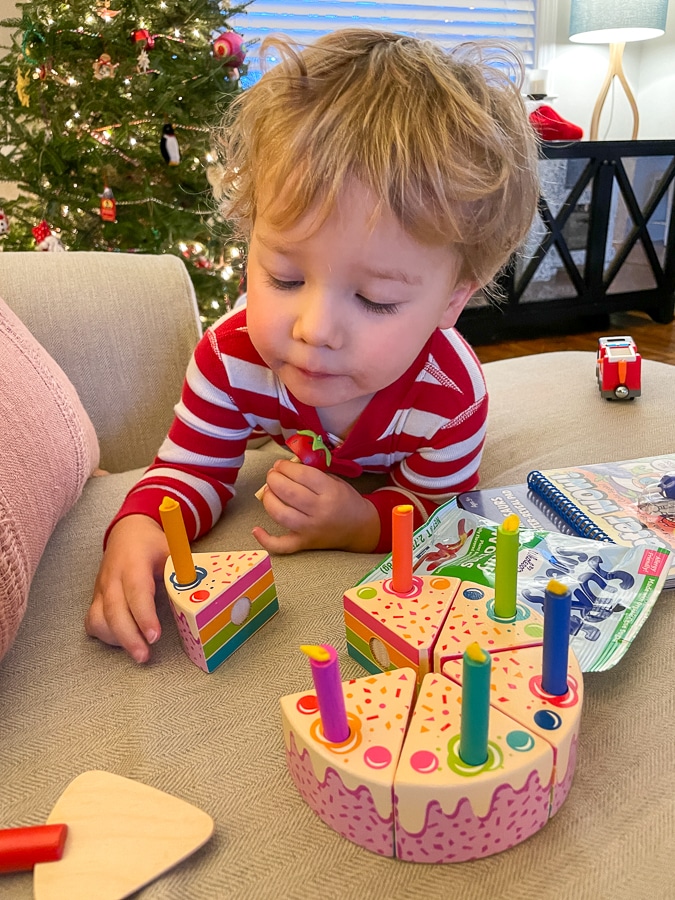 And he gave us a pretty candle that he made in school! 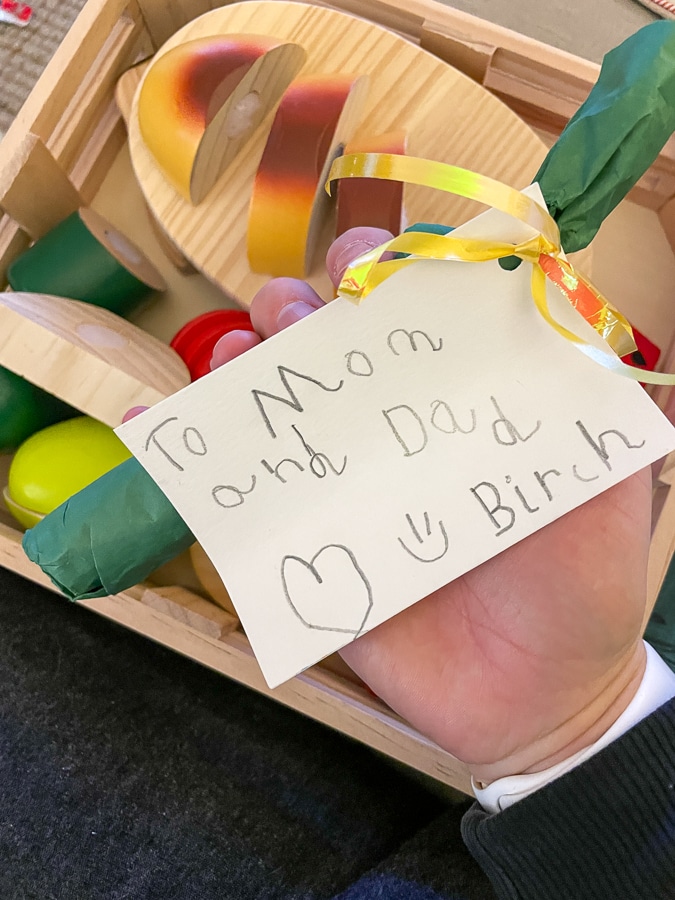 Mazen got ear pods in this huge box – ha! Plus skis, a Lego, a Lego ninja book, a disco ball, a safe, a wallet, and more. 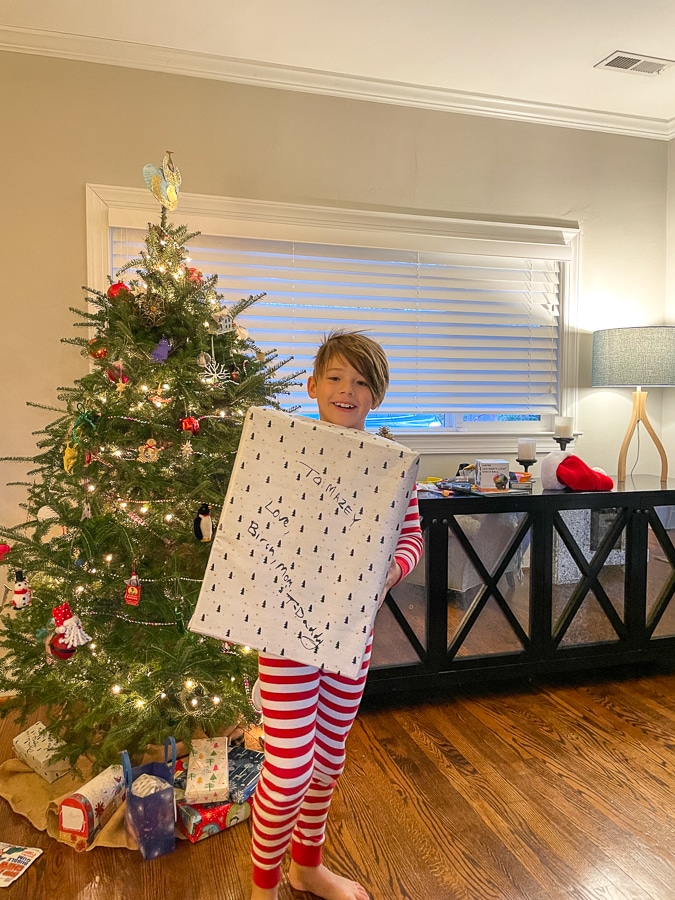 The Elf on the Shelf had a note from Santa that said their last gift was in the mudroom due to logistical reasons. They raced down there to find the kitchen. While this gift was a little more for Birch, Mazen was excited too. They played with it all weekend! 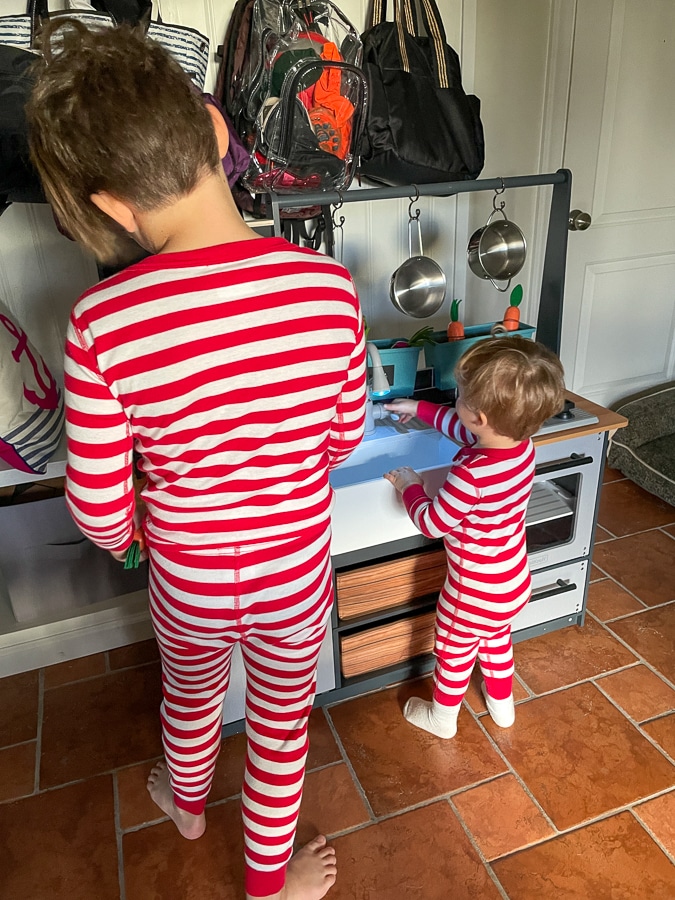 The best feature is the light-up sink and stove! They make noise too. 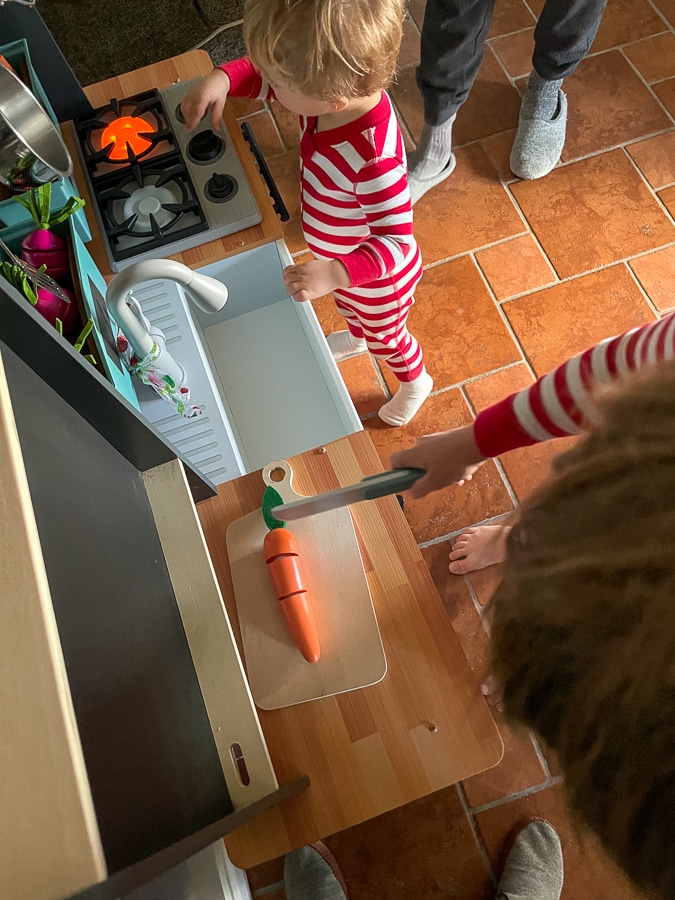 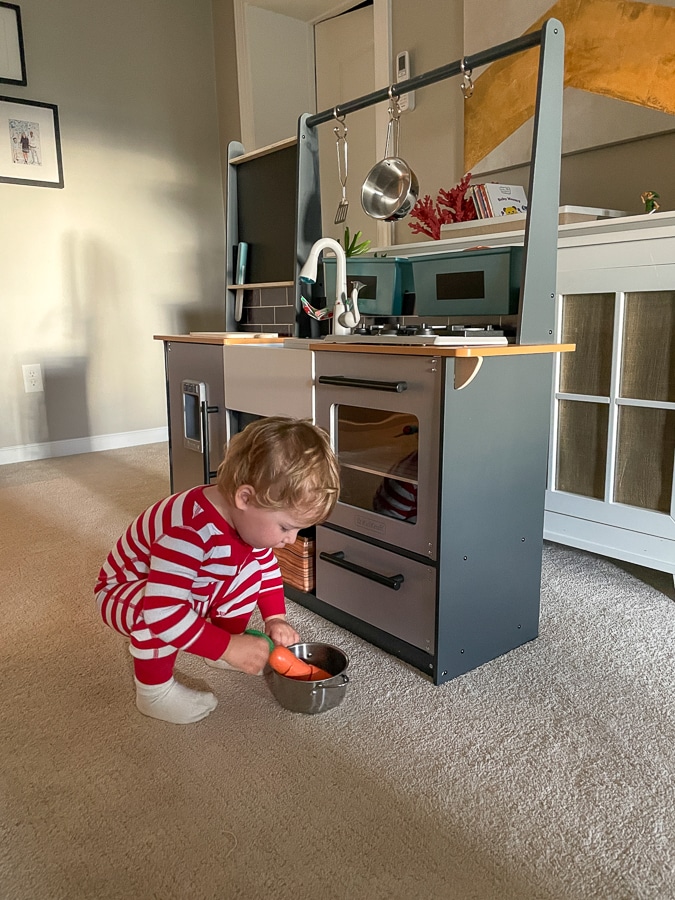 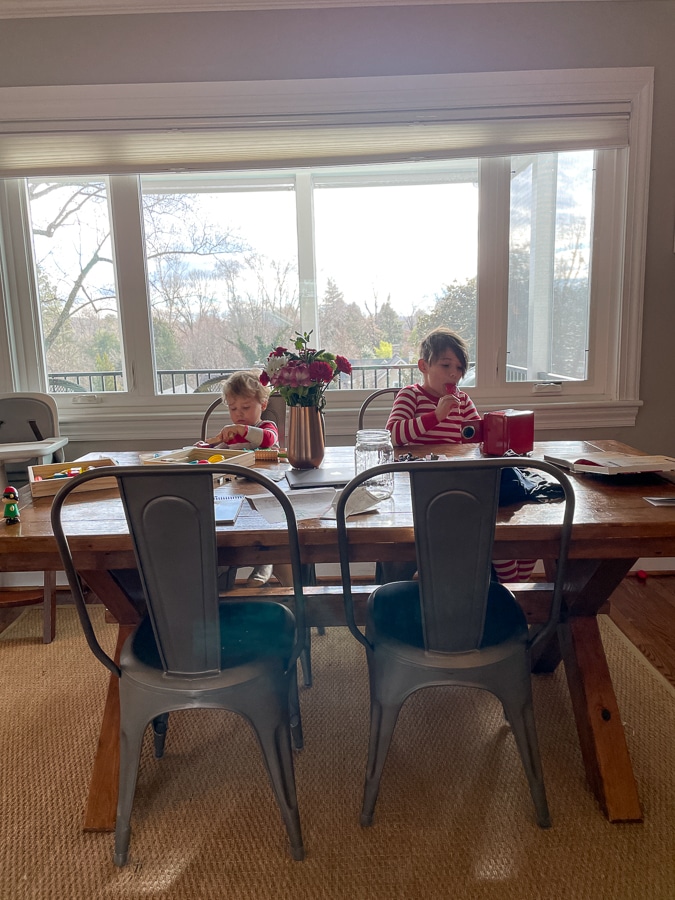 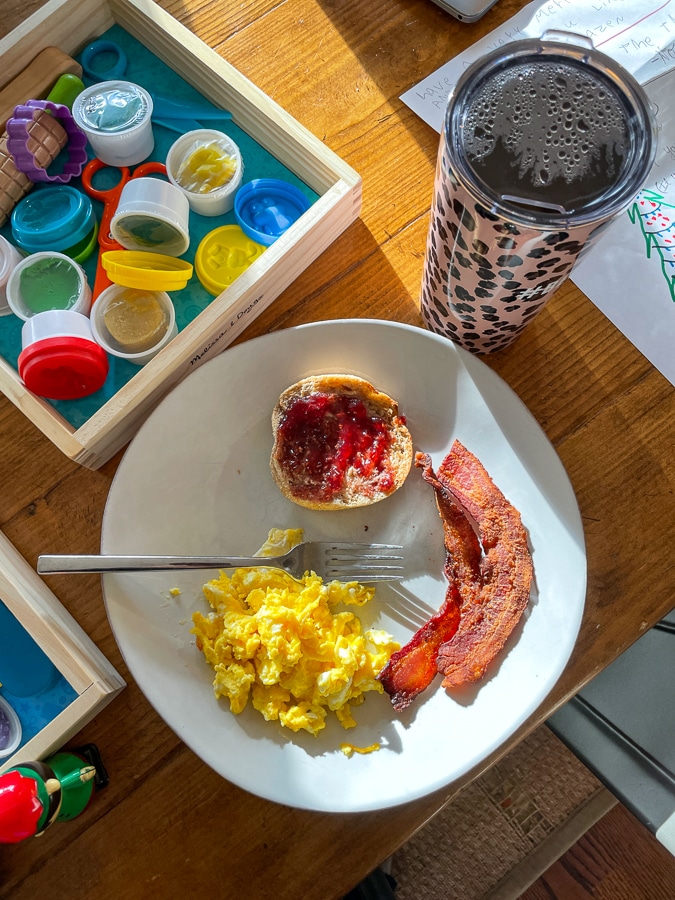 We spent the day time alternating between the Peloton bike, napping, tidying, and playing!

I can’t remember the last time I wore a dress. While we only driving over to T’s parents, who are part of our Quaranteam, it felt like an extra special occasion. 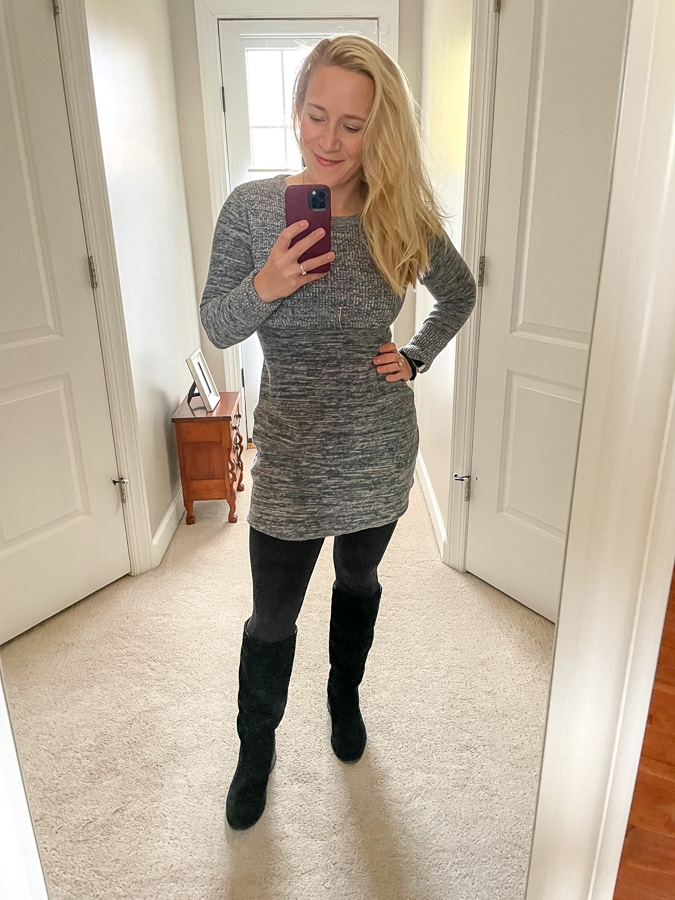 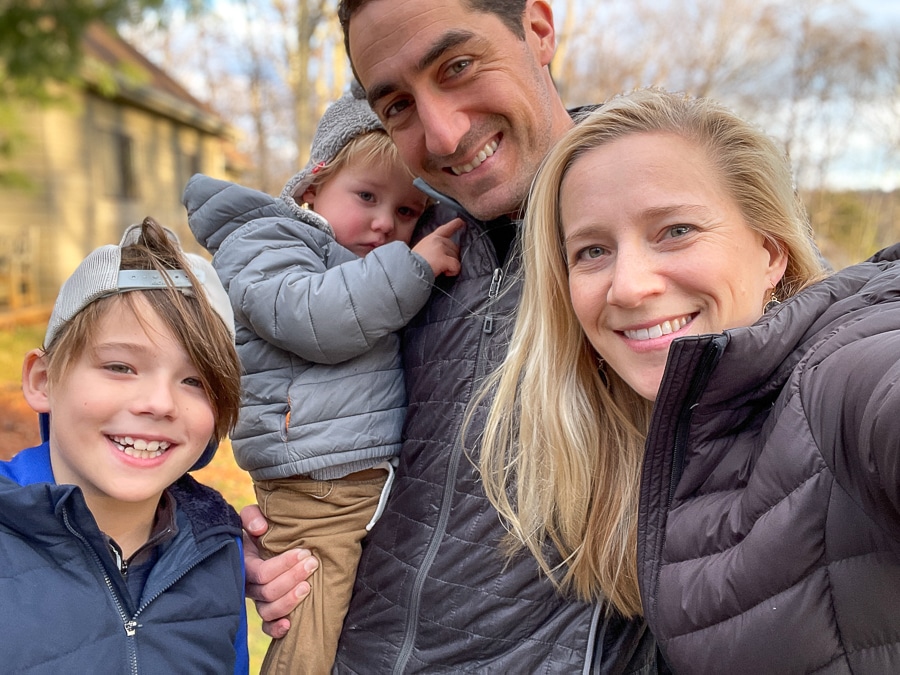 We opened a few gifts and had John’s famous Christmas pizza filled with beef, spinach and cheese! 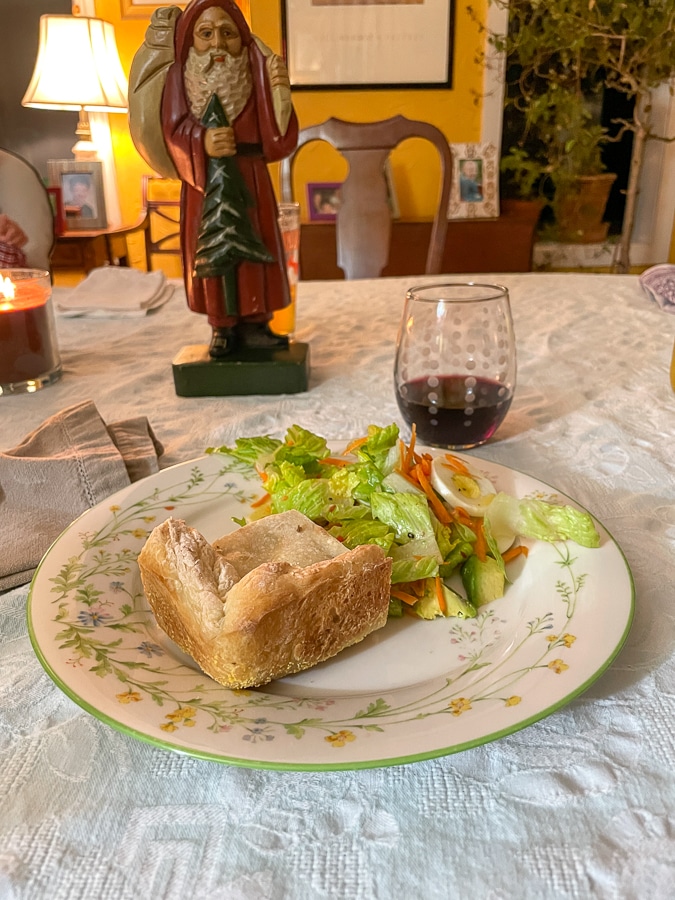 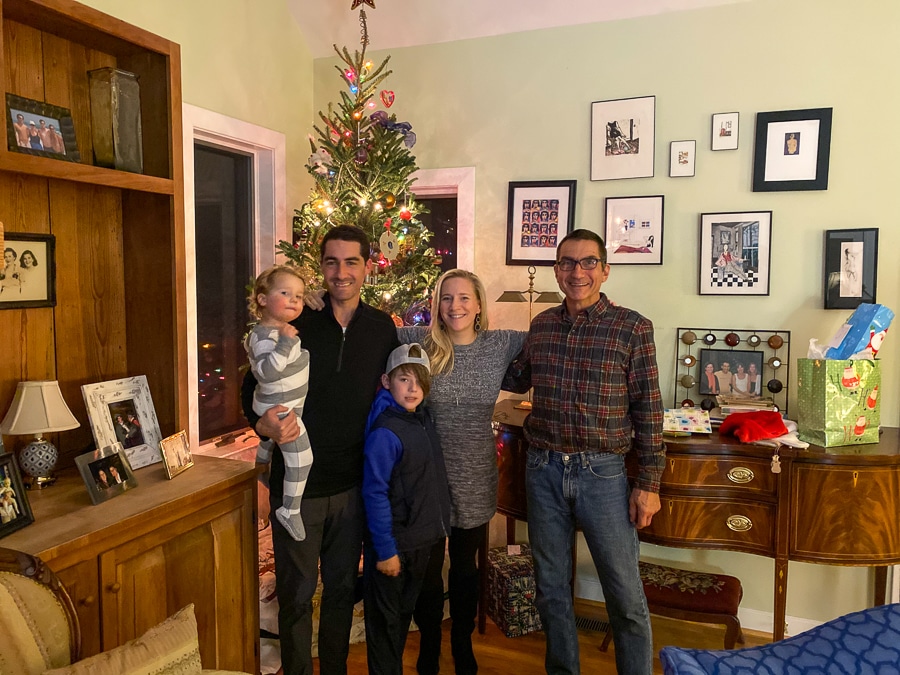 I have more posts from our Christmas break coming, including games we played and meals we enjoyed.

I’ll be back to regularly scheduled blog posts this week with a Blue Apron feature and some deep thoughts on 2020 and the new year ahead!