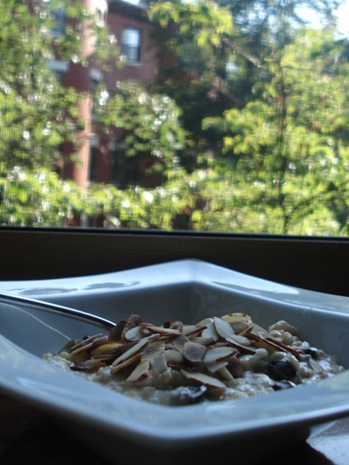 Morning from the big city! Larbs and I have plans for some exercise by the water as soon as our oatmeal digests, but Matt went running before work so I took the honor of making him breakfast. He’s a frequent reader of the blog and says he always looks forward to when I’m around to cook up some oats 😉

I made a simple pot of rolled oats along with skim milk, water, vanilla, raisins with toasty almonds , cinnamon on top and a spoonful of Whole Foods Peanut Butter . I was excited to try WF brand after The Peanut Butter Boy gave it his review as "the #1 crunchy PB." But I have to say, Nick, you haven’t tried EarthFare brand! It’s even better than this. Both kinds have some palm oil, sugar and salt added (which, for a small spoonful, I’m not worried about because it the taste is amazing), but I think WF’s is a little too salty and EF’s tastes more like sweet n salty fresh peanuts. 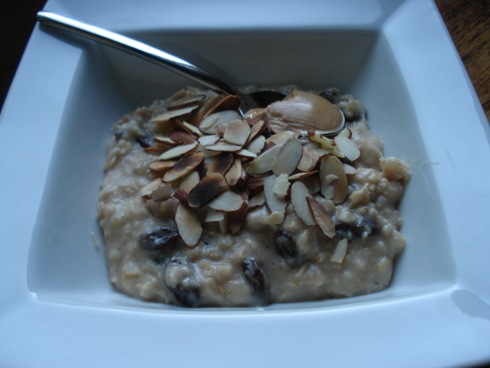 I’m going to check Whole Foods today to see if they have Granola Planks to make for him tomorrow! Crossing my fingers they have them.

Larbs and I have another day of walking and sightseeing. I think we’re headed to Newbury Street – and are planning a trip to JP Licks later!

And tonight is the long-awaited Boston KERF Dinner !!

This is a pretty hilarious website about talking like you’re from Beantown. You have to say the words outloud!! I love "Abba" (arbor); Bonnie (Barney the dino); and "Ah" (the letter between q and s)

And lastly, look at what the cute husband sent me via email last night:

I put on cologne, not because I need it myself, but because smelling good reminds me of you.

Also I need it.