‘Twas a long and busy day at work today. But I’m always one to prefer busy days : ) I like brain stimulation! For some reasons I was hangry all day too. I broke into my Alliebar snack at 3PM and ate it all by 4. But thankfully that seemed to do the trick and tide me until dinner just fine.

I got home a little later than normal and decided I would skip the gym today. I had plenty of good reasons:

I’m getting up tomorrow at Matt Time (a.k.a. early!) to get a pre-work workout in since we have an event to go to tomorrow night. Thought I’d give it a try.

So upon arriving home, Matt and I went for a 30 minute walk instead of hamstering on an ET and caught up on our days and discussed our anniversary trip – we think we’re going to go to Asheville for the weekend!

Soon enough it was dinnertime.

I’ve tried a lot of BBQ sauces, and I think Tribal Moose is the best of the best. It’s sweet but not too sweet and still has an amazing BBQ-y smoky flavor that some of the fruity sauces miss out on. This was the last of our bottle! We marinated a block of Nasoya firm tofu in it for 30 minutes or so and then popped it into the oven for about 30 minutes – until the bottom was nearly charred and flipping halfway through. MMM! 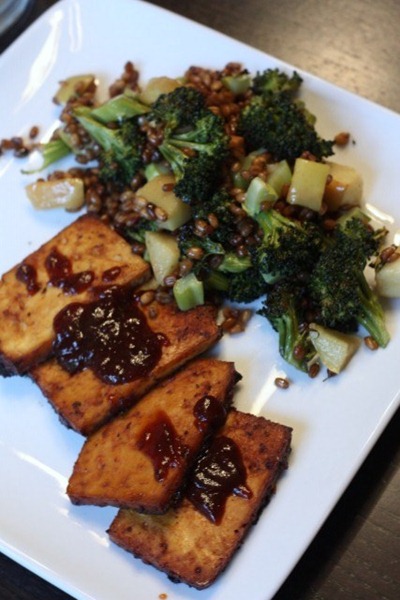 I mixed together a side salad on the …side! 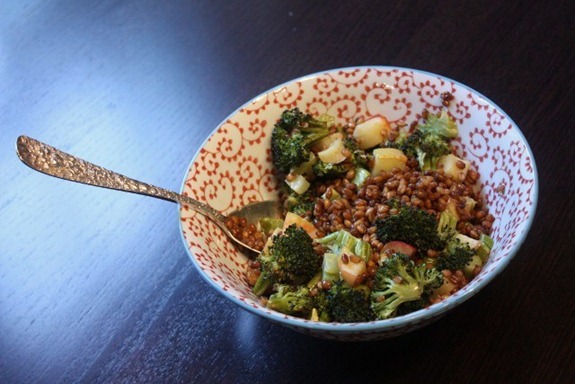 Malted wheatberries…cooked this weekend by Matt 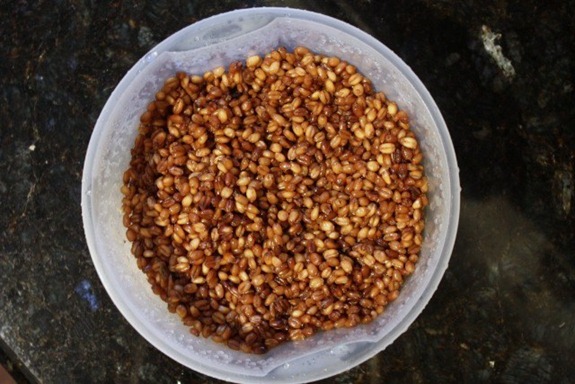 Plus roasted broccoli and apple 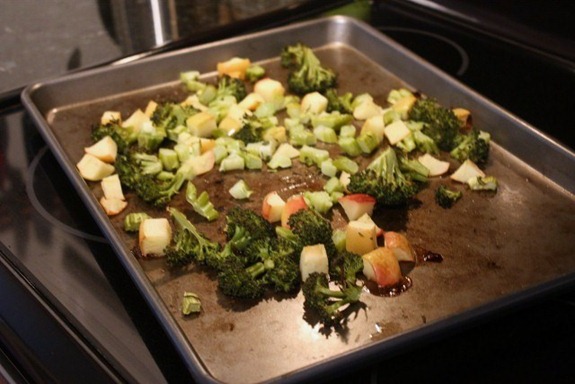 Plus a drizzle of olive oil, maple syrup and sea salt… 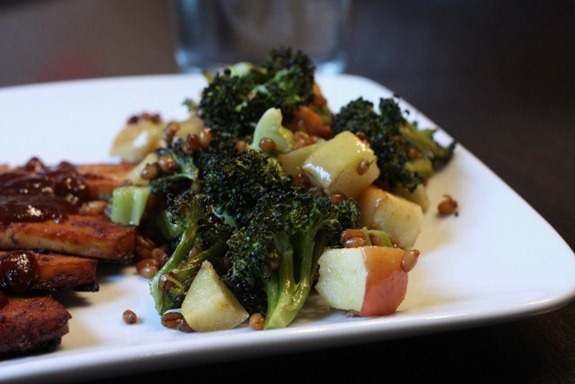 What are malted wheatberries you ask? Just ask Matt, the malt man:

When we went to the Brendan Brazier talk, he spoke about how he likes to maximize the efficiency of his energy intake – he prefers to eat food that takes less energy to digest.  One way he does this is by eating sprouted grains.  Sprouting (also known as germinating or malting) a grain means you "trick" the seed into thinking its growing a new plant.  Amongst all kinds of interesting biological processes like growing a root, malting also creates and activates certain enzymes in the seed.  In a normal plant’s lifecycle, these enzymes break down the starchy endosperm of the seed to provide food for the growing plant.

Lucky for us we can use that food as well!  Kath likes to point out that our brains are fueled by simple sugars alone.  Not fat, nor protein, nor complex carbs, but essentially sugar.  If you consume starches, your body must first break them down into sugar before your brain can use them for energy.  If we malt a grain, part of the work has been done for us.

Well I decided to take this a step further, using my brewing knowledge.  The first stage of brewing is to use the enzymes in the grain to completely breakdown the starches into sugar (this is called mashing).  Usually we do this with crushed grains (barley in particular), but I wondered what it would be like to do it with whole, malted wheatberries!  That’s right, I said wheatberries.  You see, some malting company has taken wheatberries, malted them in a huge facility, and then dried them out for the purpose of brewing.  I bought some of thesemalted wheatberries at the homebrew shop.  Then I steeped them at specific temperatures over the course of an hour, which caused the enzymes to turn the starches into sugar.  Then I boiled off all the excess water, which concentrated the sugary water to just the grains, and we were left with malted, mashed, cooked wheatberries!

What’s the flavor difference?  Regular cooked wheatberries have a real grainy, bready flavor.  Malted wheatberries, when cooked, have a slightly sweeter and toastier quality than the regular guys.  But these mashed wheatberries have a surprising sweetness to them.  It’s not candy-sweet, but more like fruit-sweet.  The final boiling really concentrated and even caramelized some of the sugars, so it has this maple syrup/honey thing going on, with a bit of toasty richness.  Think honey drizzled over a whole-wheat bread crust.  Delicious! 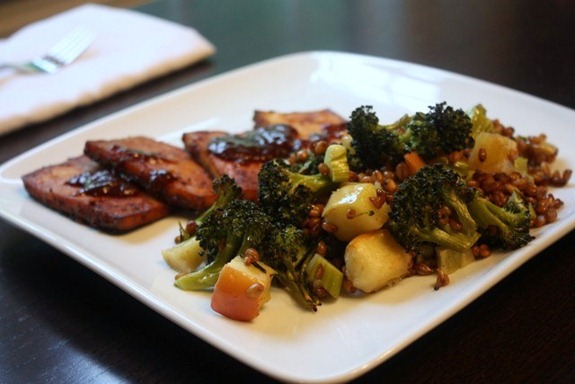 The wheatberry salad was excellent. And I say malted wheatberries are like a blend between Grape Nuts and a beer! 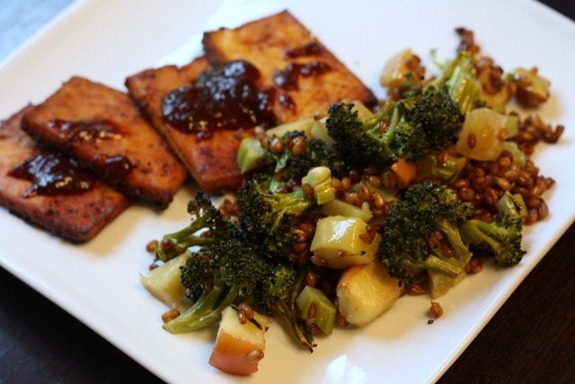 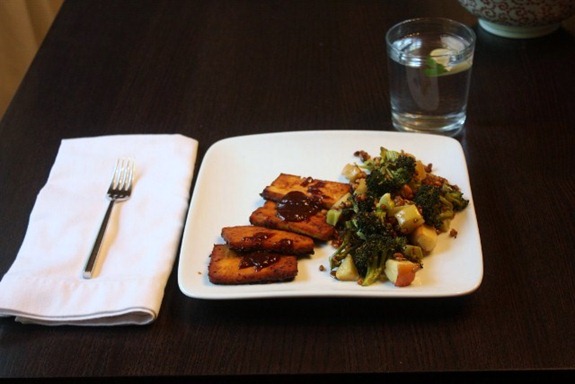 Hoping to finish up my computer work in time to start a new book! I finished The Last Song last night. And while I did complain a lot while reading it, it was a pretty good book overall. I would like to see the movie! Think I’m going to start Pat Conroy’s South Of Broad tonight to continue the beachy theme 🙂

Did you change your name upon marriage?

I didn’t!! I didn’t feel like I’d be the same person. I wanted people to know who I was on paper. I love my last name because it’s a word ( Katherine Anne Younger ) and couldn’t imagine introducing myself any other way. I sometimes feel like myself and I are best friends and we’ve lived our whole lives together and changing my name would have been like moving away from a really good friend. I almost hyphenated, but changed my mind in the final months before our wedding. Matt’s response was "I love my last name and would never change it, so I don’t know why you’d want to change yours." [We still don’t know what we’ll do about our future kids, but we’ll cross that bridge when we get there. And we’re just as in love as a couple with the same last name!]

I also wrote my history thesis on Lucy Stone, who is well known in history for being one of the first women to publically refuse to change her name. I’m not sure if Lucy inspired me or if I was already inspired and choose to research her, but I don’t think anyone should have to do something just because "that’s the way it’s always been done." Well-behaved women never make history, after all 😉

Did you change your name, or do you plan to when (IF?) you get married?