I had a frustrating afternoon/evening that left me cranky 😥

Girls on the Run went well though! They did a scavenger hunt and had fun, which makes our job as coaches easier.

I decided this afternoon that I would treat myself to dinner out rather than make a sandwich for dinner. I picked the closest cafe I could find to minimize my time getting to campus to cram for my exam: Camille’s Sidewalk Cafe. I was excited by the menu when I checked it out this afternoon and was planning to get a huge salad and cup or bowl of soup for dinner. But when I got there the only soup they had was chicken noodle 🙁 I didn’t think that would fill me up enough, so I decided to try a half sandwich instead. I chose a “Paris” sandwich with ham, brie, apple and spinach (and high-fat honey mustard that I got on the side). I wanted to get half, but they said it only came in full size. So I just decided to get that. Then I ordered a House Salad but she said it came with one so I just had that.

Well the wrap turned out to be incredibly small. I knew from the menu that it was about a 500 calorie wrap, so I had thought one half would be the size of the whole thing based on other restaurant’s wraps.

And the salad – even smaller!!! I wanted something as big as the whole container!

When I opened the (wasteful and unattractive) plastic styrofoam container I was so disappointed. 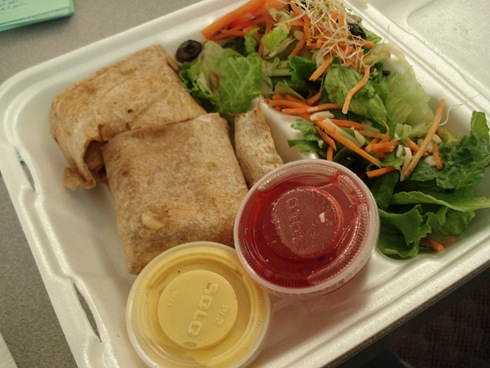 However, they both did taste very good! 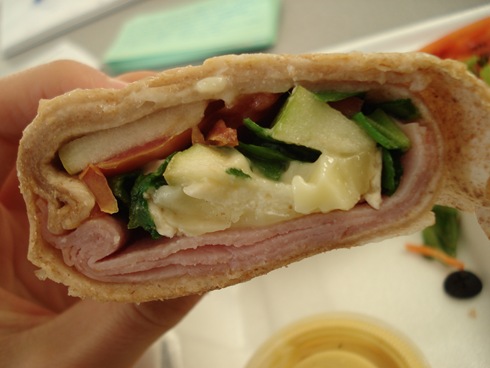 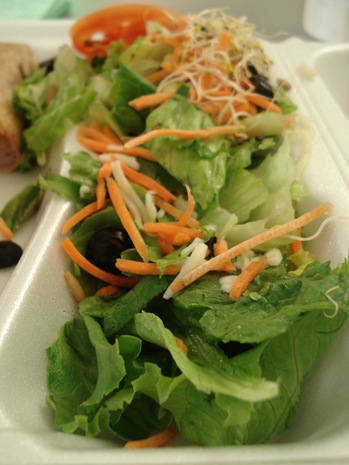 After some major cramming, I went in for our Micro test. I think I did OK – so hard to tell because she’s a killer grader. For our other two exams we were allowed to go as soon as we finished. Most of the class assumed this would be the same and left. I handed her my test, looked her in the eye and left. Well LUCKILY someone in the hall told me that she said to wait and come back at 7:30 for lab. She only told ONE person this and didn’t tell them to tell everyone else. SO, turns out I had to stay for another hour and do this dumb lab!! I was SO mad since I had been about to leave and get home early.

But I did snack on this little treat in my spooky car in the parking lot. It was good – definitely the best one I’ve had yet. I loved the chocolate chunks! 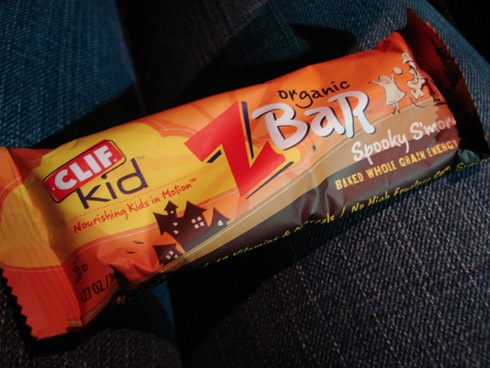 Sorry to be such a Debbie Downer!

Tomorrow’s another day and I get to have a big bowl of oatmeal in less than 12 hours!! Wahoo!