So much to do, so little time!

Matt and I did household chores this morning, which meant that I cleaned and folded while he watched Conan 🙂

Then we set out for the gym. Lately my mindset about the gym has changed. Whenever I get the urge to not go, I think of it as an indoor playground of people just enjoying themselves on the machines and reading magazines and watching TV and suddenly it seems much more fun. Instead of a place where I am tortured by sweat and lactic acid, I’m thinking of it more as a place to relax and enjoy a good magazine, while moving at the same time of course. The new mindset has really helped, and I had a lot of FUN today! We biked there (which takes 18 minutes or so) and then I did 30 minutes on the elliptical with Real Simple and then Matt wanted to lift weights together at the end. I told him to just tell me what to do (we are so indecisive – we can debate decisions as small as what type of weight lifting we want to do for hours) so we did a few machines and free weights in tandem.

We arrived home around 1:30 and I was ready for some lunch! I showered and did girly things while he made a batch of tuna salad. This is my tiny little Cali bowl – so cute! 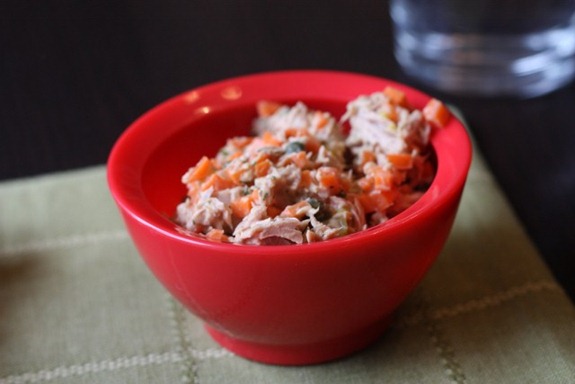 The tuna salad was made with carrot, pickles, capers, mustard, dill, mayo, salt, pepper. The pickles were the highlight!! 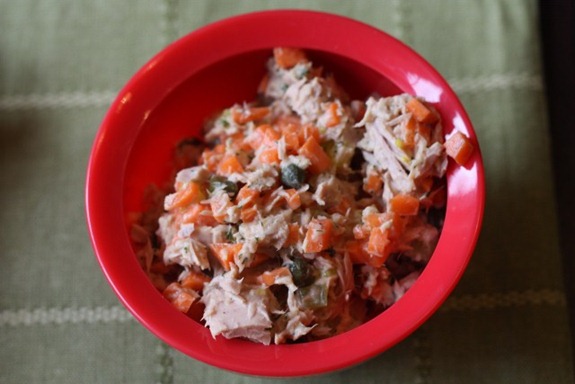 I enjoyed dipping these Old London Melba toasts that I got as a sample a while back. 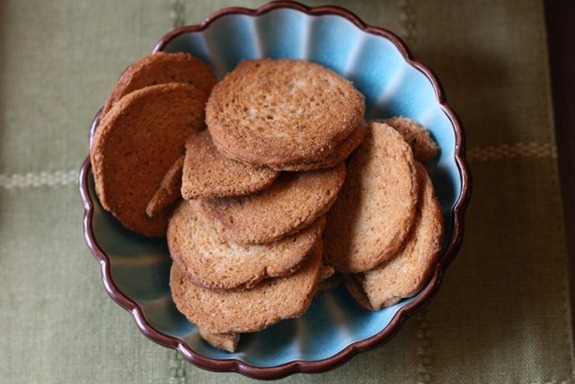 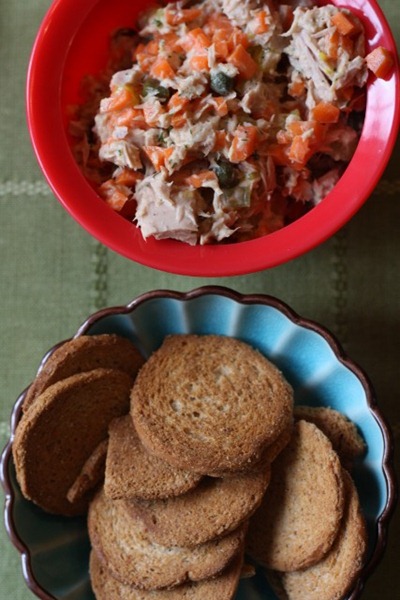 The rest of my lunch was filled with my favorite veggies: kale chips + squash! I am very much enjoying having leftover squash to reheat, an idea I stole from Jenna 🙂 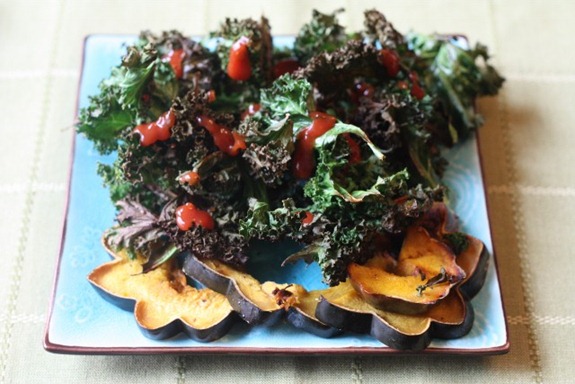 Last night when I was going to bed I think all the fiber of the squash (which I’ve pretty much eaten all of in 24 hours!) caught up with me. My stomach was sticking out so far! 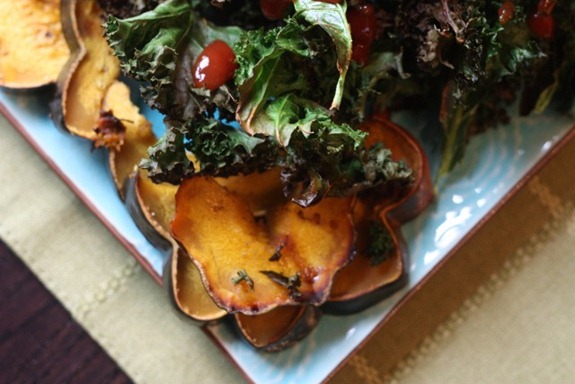 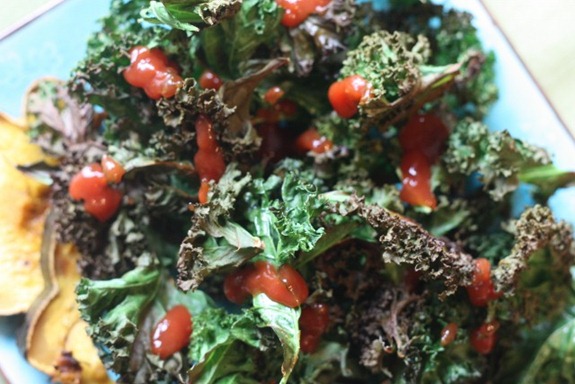 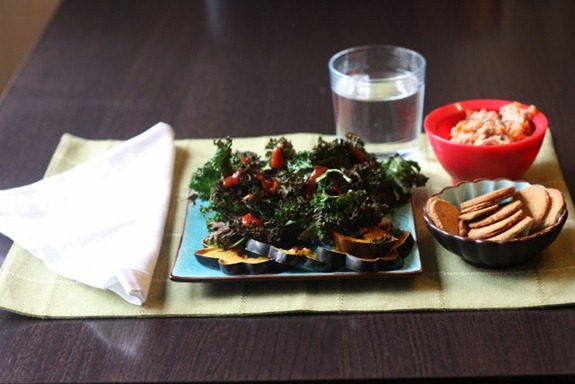 I received a few of Guy fieri’s Knuckle Sandwich Ergo Chef knives to review. The 8" chef knife and the 5.5" utility Dragon Dagger! 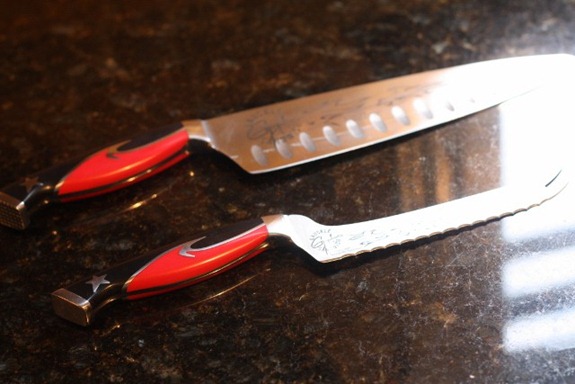 I gave them a nice chop chop and liked them a lot! I like how heavy they are and they do feel very ergonomic. Kind of like walking in wedge shoes – you get a natural lift. 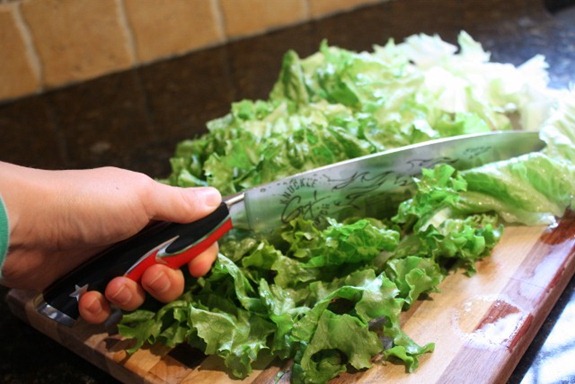 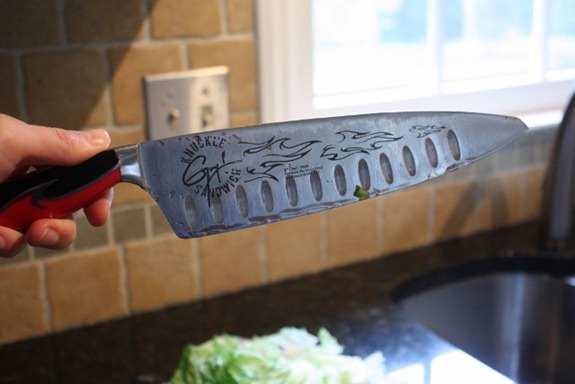 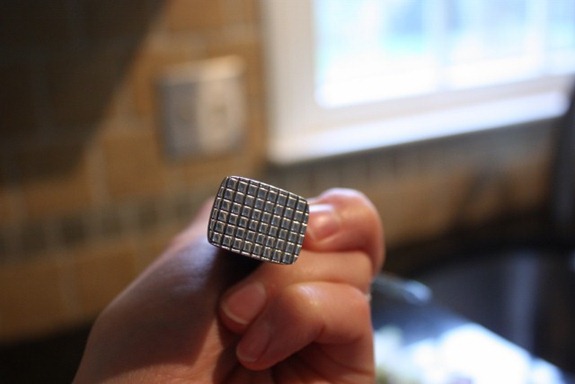 I am no knife expert though, so I gave them to Matt, who is, and ask him to write up his thoughts. I said "it can be quick – just a list of what you like or dislike" and here’s what he had to say:

I’m always wary of celebrity lines of cookware.  I just don’t believe a celebrity when they say they’ve had a company make this pot or pan specifically for them.  And then I see them in Costco or Sam’s, which does not inspire confidence in my inner chef.  So when we got these knives by Guy Fieri, I was very skeptical.  But we decided to give them an objective trial run and I’ve found some things I really like about them, and some I don’t like.

First, I can’t help but to hate their appearance.  When it comes to cookware, I want everything to be clean and sleek.  These knives just plain look hokey.  Flames on the blade, stars and curves on the handle, and a big fat "Guy Fieri Knuckle Sandwich" stamped on the side – it doesn’t feel professional.  But I suppose performance is more important, so on with the real reviews.

The first knife is the 8" chef’s knife.  What I really like about this knife is how thinly the blade comes to an edge.  Most of my knives have a very thick blade that suddenly thins at the blade.  The problem with this is that the angle is so steep that its sharpness is difficult to maintain with a honing steel.  Furthermore, when it comes to actually sharpening a blade, you have to grind away a lot of metal to get the edge where you want it.  Because this knife is so thin all over, it feel like it cuts very sharply.  The blade also has a nice curvature, which makes it easy to get a nice rocking motion going while chopping (and this is why I hate santoku knives)

As for its feel, it has great balance.  It’s sturdy, but feels very light and controllable.  I’m not crazy about the handle, though.  The surface itself has a decent grip, but the whole handle is just too small.  I like a knife to really fill my hand because it feels less likely to slip (and I’d say I have average sized hands).  For those of you with pretty small hands, you might like the size.

The second knife is the "Dragon Dagger," which makes me want to barf with corniness.  When I first saw this knife, I thought "what can I possibly use this for?"  But I’ve come to see its value as a vegetable knife.  I like that the blade is offset, meaning you can cut all the way to the cutting board without your knuckles hitting.  It has the type of serrations I like – wavy ridges, rather than saw-teeth.  This is a great knife for cutting tomatoes and other small items.  Still, because the blade is very short (5.5"), it’s limited in its uses.  I hate the double points on the end – nearly useless, but they make the knife soooo much more dangerous.  Honestly I think they’re there to look cool.

Overall, I really like the chef’s knife and I can see using it a lot.  Not so much about the utility knife.  If you’re just now building your cutlery, get a chef’s knife (and this one will definitely suffice) and a paring knife.  Happy cuttin’!

If y’all would like the chance to win a set of these knives, leave a comment telling me what your favorite thing to CHOP is and I’ll randomly pick a winner 🙂 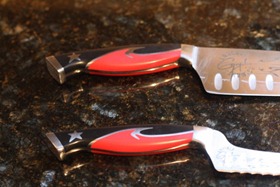 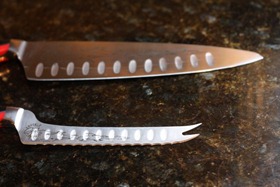 My stomach was growling – ever so slightly – after breakfast. And I feel a bit hungry right now just an hour after lunch! I think I’m in my hypermetabolic time of the month 😉 Just chugged some water and if I’m still hungry I’m going to dive into a yogurt.

Afternoon: we’re going to see The Road and then having friends over for soup + salad!

Hope you guys are safe and sound in your snowy (or sunshining!) cities!