It was one hot day, and it’s hot down here so I gotta blog fast and get up to our cool bedroom!

I left for work in a tizzy after trying to get the laundry in the dryer before I left. Ten minutes later, after climbing a huge hill on my bike, I arrived at the lightrail nice and hot. The train came quickly enough, and I had a glorious 20 minute ride with my iPhone 🙂 Once at my stop, I had another 5 minute walk in the heat to the gym where Mary works. I’m not sure I can do this commute in July!

Mary and I chatted for a few hours, talking about what I hope to get out of the summer and making a to-do list to things we want to get done. (See this post for the details: Phat Burrito, Phat Job). Turns out since I’m working for someone with a flexible schedule, I will have one too 🙂 In fact, I am working from home tomorrow while Mary attends a meeting! Thursdays hours have shifted to afternoon/dinnertime so I’ll be going in later too. I’m digging the flexibility already

Around 2pm we headed out for lunch. I’d never been to Big Daddy’s Burger Bar, a big hit in Charlotte, so that’s where we headed. There are a handful of restaurants where I have yet to dine that Mary said are a must this summer, including a new cafe that’s opening next door and will be focused on raw and vegetarian food called – get this – REAL FOOD! 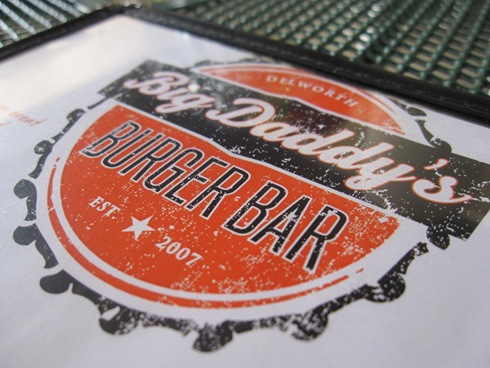 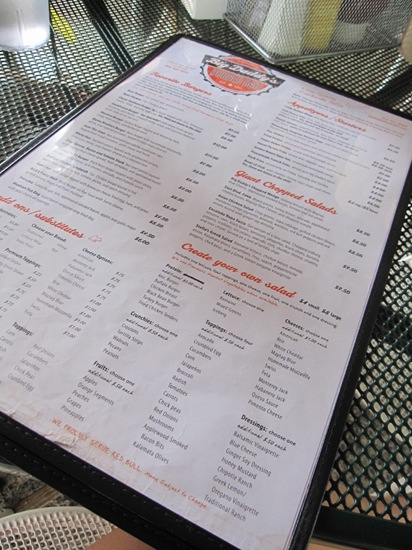 We both decided to do build-a-salads with burgers on top. I wasn’t hungry enough for a real burger. 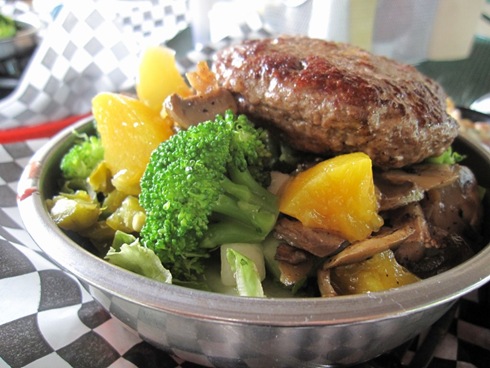 I went for the buffalo!!! On top of a bed of romaine, broccoli, corn, jalapenos, carrots, mushrooms and peaches. When the salad first arrived I thought it was the tiniest salad and wished I had gotten a large, but it turned out to be the perfect portion. (For scale, this bowl is about the size of a large cereal bowl.) Despite the small salad, that was one big burger, and I ended up eating it all. 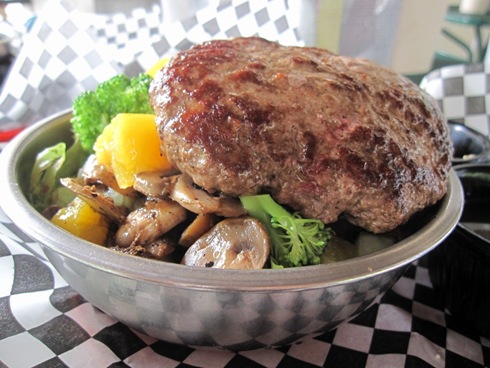 Didn’t use much dressing, and that’s pimento cheese on the side that was onion-y. Ew. 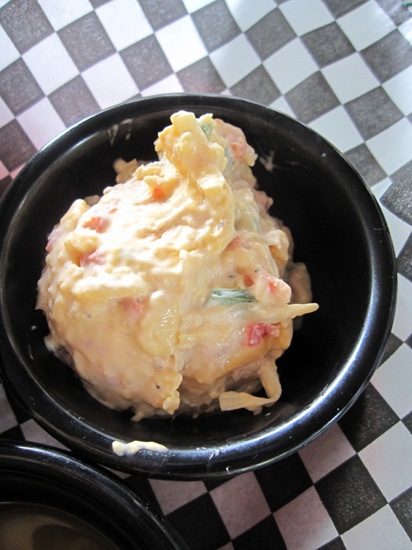 Mary said the sweet potato fries were not-to-miss so we shared some of those. I had about half a cup’s worth? They were good! 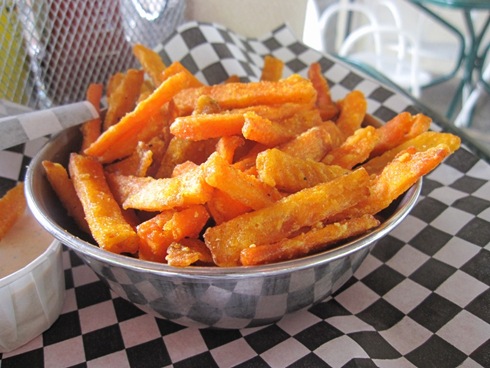 After lunch I gathered up my homework – lots of reading of business materials, a book on PCOS, and more – and headed back to the lightrail, and to my bike for a sweaty ride back.

I was prickly and miserable when I got home and grumped my way through some emails (sorry girls!) and a messy house, which I had to clean up as soon as I was finished catching up on the computer.

[ Why don’t we just turn on the AC you ask? Because we’re stubborn and like to wait until July for economic + environmental purposes. Plus we like the sounds of the outdoors and fresh air and just have a few more weeks to suck up the heat /]

Thankfully my hero volunteered to make something for dinner while I finished the housework. At my suggestion he made Egg Muffins! 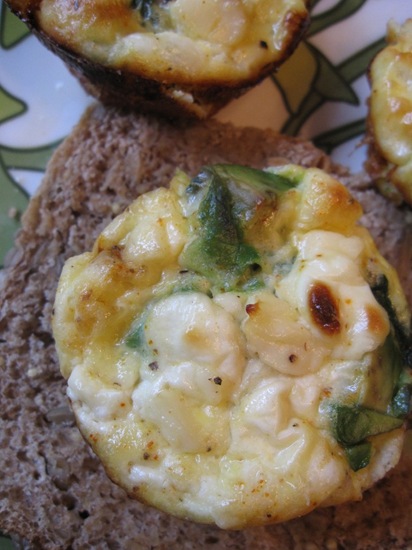 I don’t know exact proportions, but it was mostly to taste. He poured them into 6 muffin cups and baked at 350* for about 20 minutes or until eggs were set. (This recipe for Omelet Muffins is more exact and just as good) 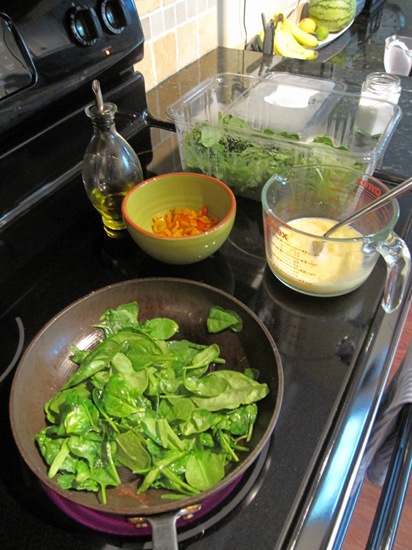 3 cups served on a slice of Dakota bread 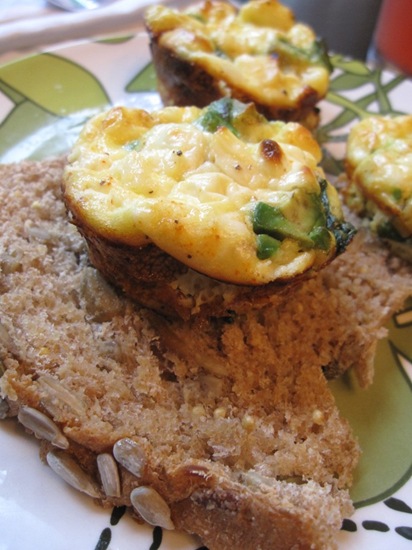 While Matt was making the muffins, I was making this Watermelon Cocktail! This started as watermelon on the side of our plates, which I then thought about turning into a cool smoothie, which then turned into a vodka drink! 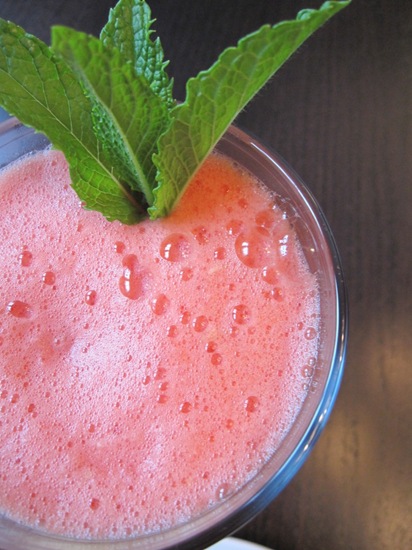 Blend and garnish with mint! Serves 2. It does separate easily, so mix well as you drink! 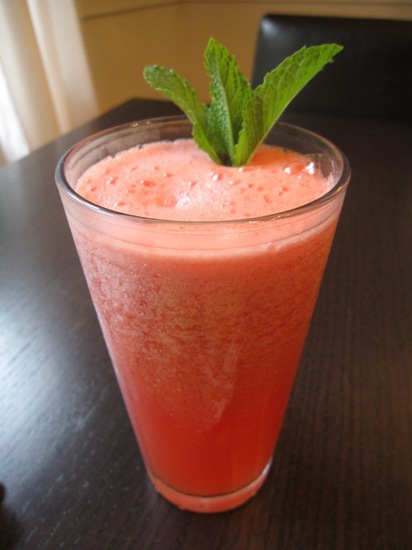 I had a slice while I blended 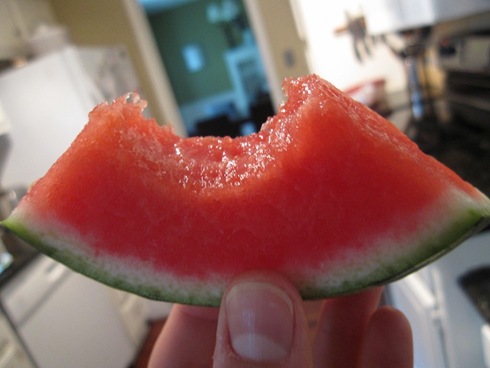 And that would be our dinner: 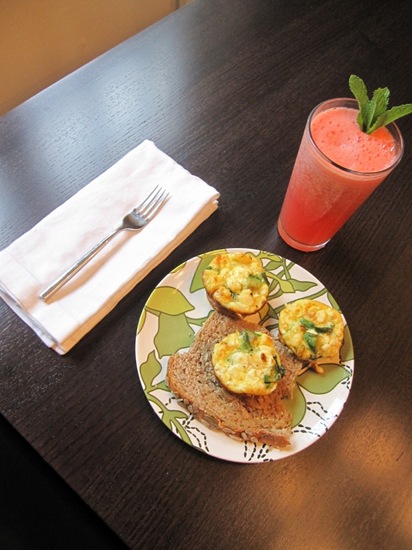 We watched the first half of Revolutionary Road this evening. Like it so far!

Off to sit next to a fan.