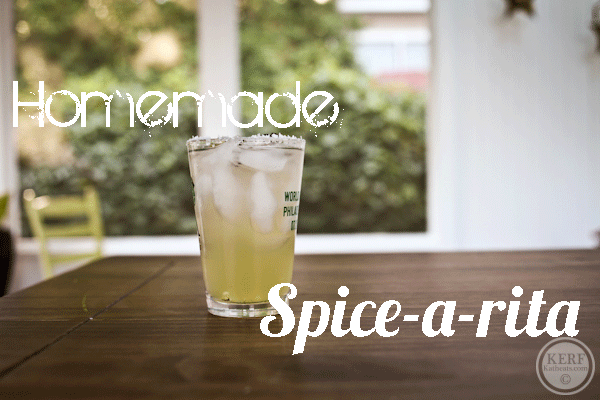 If you visit Cville, you must make time to eat at Mono Loco. It’s not your typical Latin restaurant. Instead it’s like California fish taco meets Southern fusion. Say what? They have everything from burritos with cod and yucca fries to my favorite – The Gibson – with fried oysters inside.

But setting the food aside, the most important thing you must order is the Spice-a-rita!  Matt and I are not generally huge margarita fans (yay beer and bourbon!) but this jalapeno-infused margarita twist is just amazing. It’s quite spicy and lime-tart without being too sweet. We’ve been wanting to replicate it at home for a while, and since the garden has a bounty of jalapenos, we figured it was time. 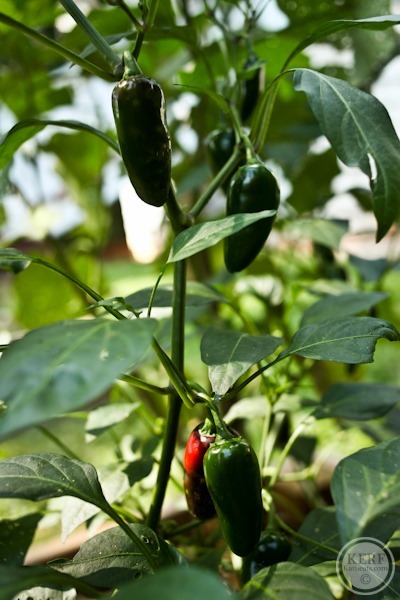 Matt asked the bartenders for some pointers on how to make these at home and they were pretty upfront about how simple it is. They grill their own jalapenos and infuse spice into a house-made margarita mix.  The other ingredients are white tequila, triple sec, ice, and a salt-rimmed glass.

With this in mind, we picked all the ripe jalapenos we had. They’re a little smaller than what you get at the store, but this is typical for home-grown peppers (or at least this has been the case for us). 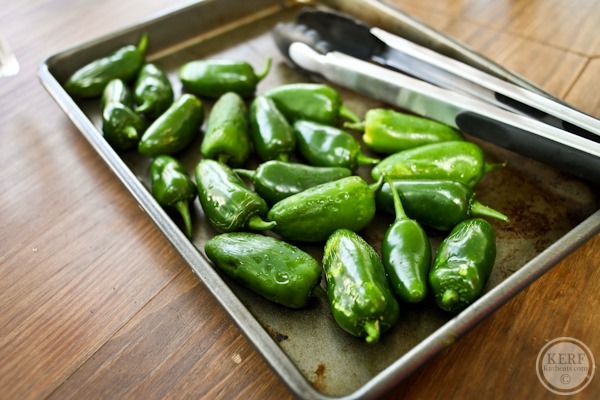 That’s 20 peppers in all, and after sampling them we felt they were average spiciness. Keep in mind, though, that spice level can have wide variation (sometimes you can get a real kicker without realizing it!)  They went directly onto the grill for a few minutes on all sides until well cooked. 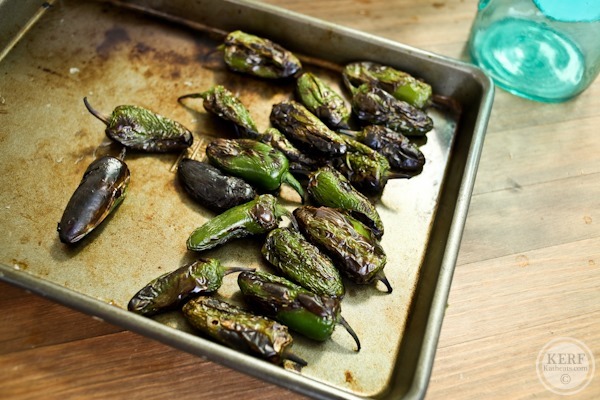 We sliced off the stems and discarded, and then cut the rest into slices… seeds and all!  It yielded just over a cup. 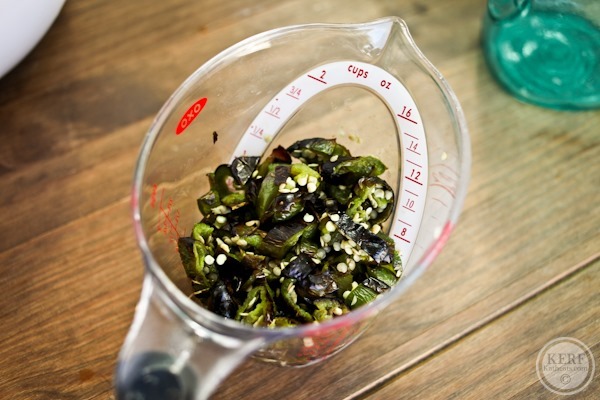 Next up is the arduous task of making the lime mix. We washed 16 limes and got the prep area ready. 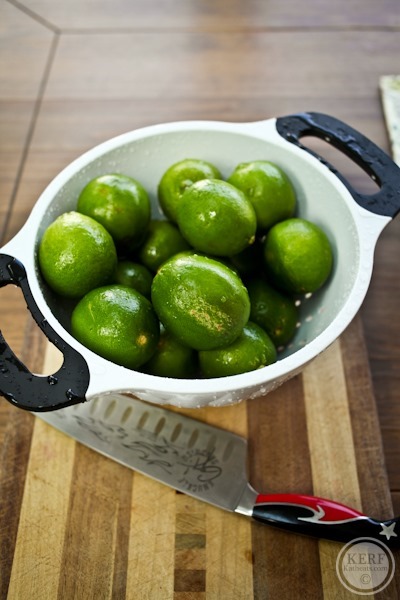 Rolling the limes apparently makes juicing a bit easier, but you’re gonna be hurting no matter what after juicing all these guys. {Says Matt who took over the juicing task!} 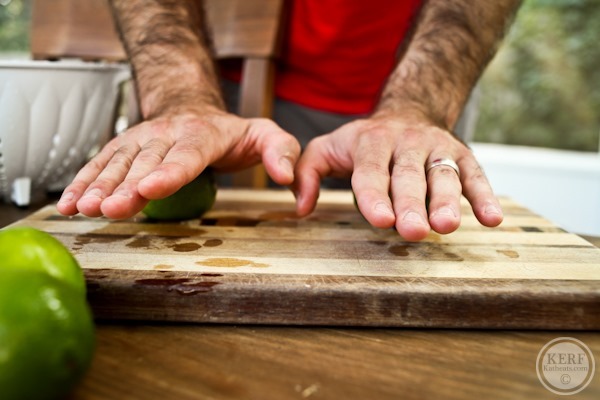 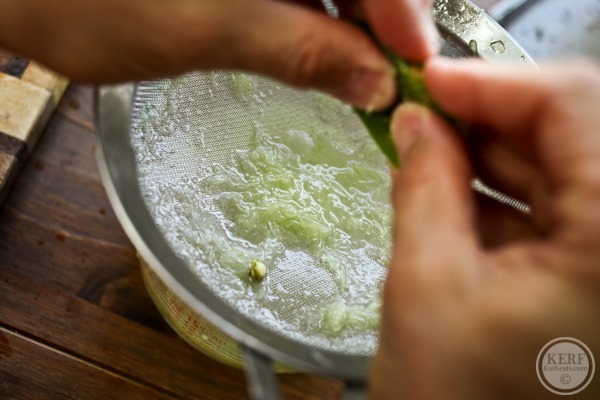 And what do you know, 16 limes yields 16 ounces of juice! 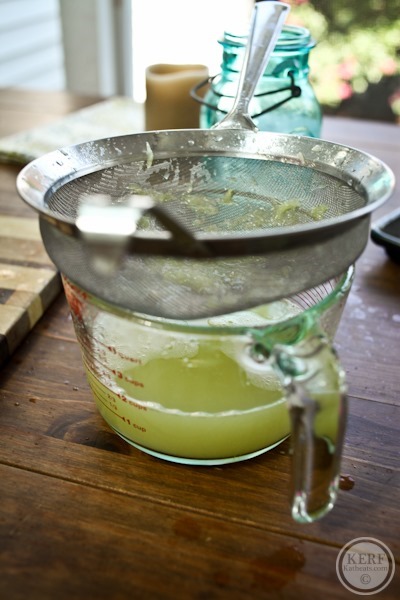 We gave M his first taste of lime thinking he’d make some funny face, but he didn’t seem to notice at all. 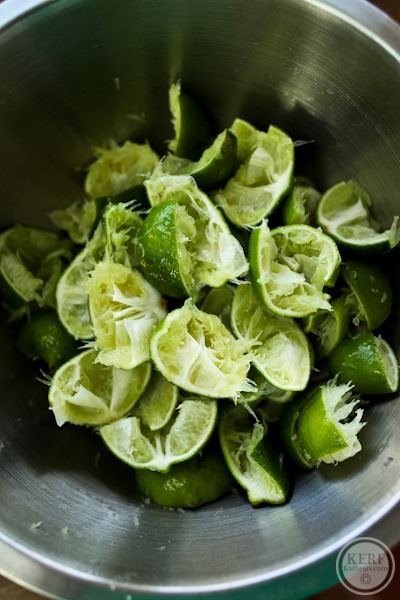 We set the lime juice aside and then made a syrup on the stove top. At first we started with a simple syrup – 1 cup of water and 1 cup of sugar.  After trying various dilutions with the lime juice, we ended up making the syrup half as sweet.  So the final concoction was:

Bring the sugar and water to a boil to dissolve the sugar, and then combine with lime juice. This will yield slightly more than 4 cups.

Matt evenly split the sliced jalapenos into a quart and pint mason jar so that we could see the difference in spiciness. {I was worried he’d make it too spicy for me to drink.} 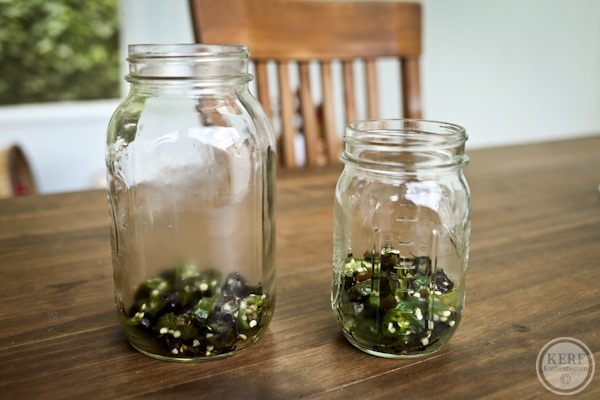 And then filled with the lime mix. 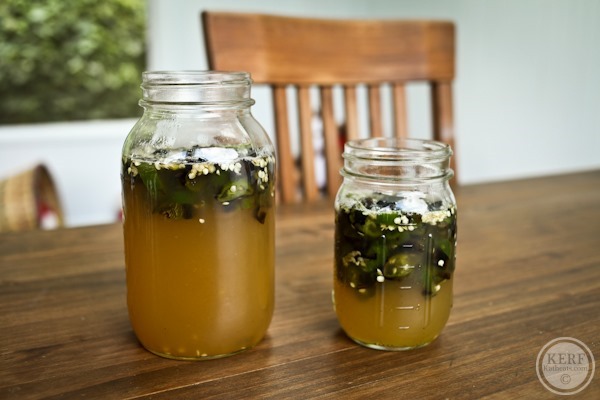 We thought that we might have to wait 24 hours for the flavors to steep but after about 10 minutes we were already excited to get mixing. The mix was already impressively spicy, and big surprise that the small jar was about doubly so.

The bartenders at Mono Loco seem to eyeball the drinks when they make them, but we wanted to come up with some exact measurements for those of you who like to be more precise. We played around with a lot of ratios making tiny drinks in shot glasses, but they all didn’t seem quite right. Everything tasted too strong – like a dorm room margarita gone bad. We were getting discouraged that we weren’t going to be able to get it right, and then we realized that we were essentially forgetting one of the key ingredients: ice!

We also decided to try the same pouring technique that the bartender used to try to mimic the proportions.

First, dip the rim in some lime juice and salt if you’re a salt-lover. {We didn’t have fancy margarita salt so we just used Kosher.} 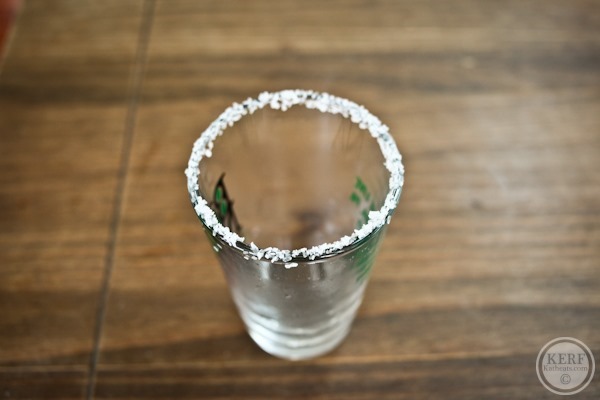 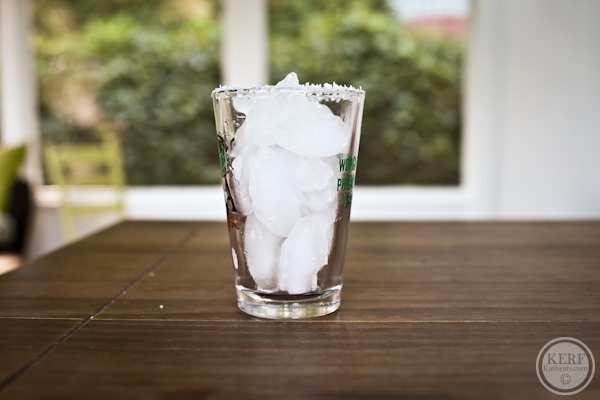 Pour white tequila until the liquid level is 2/3 full. 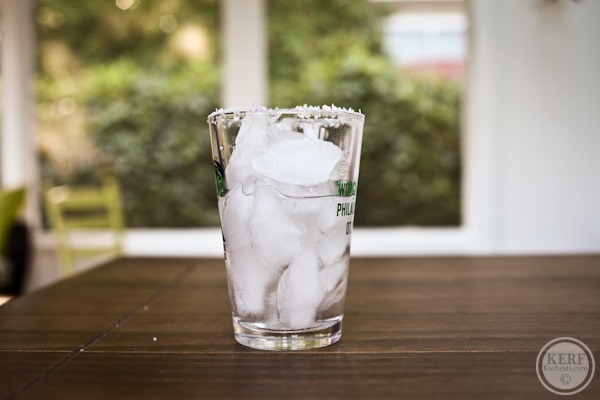 Pour triple sec until the liquid level is 80% full. 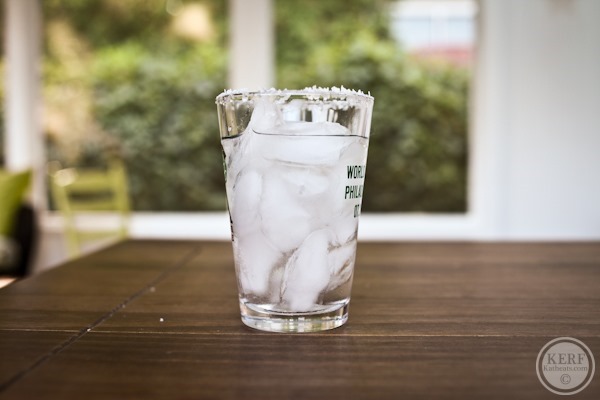 Top off with lime mix. 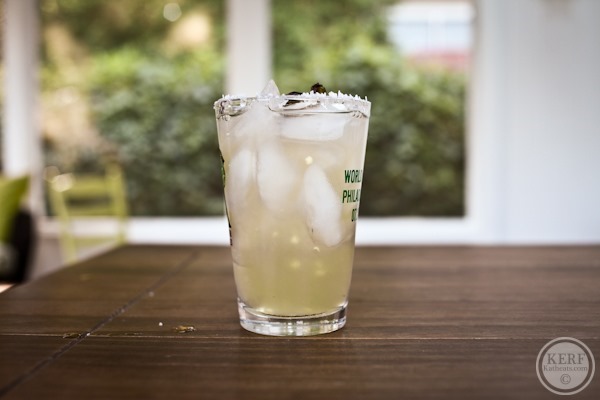 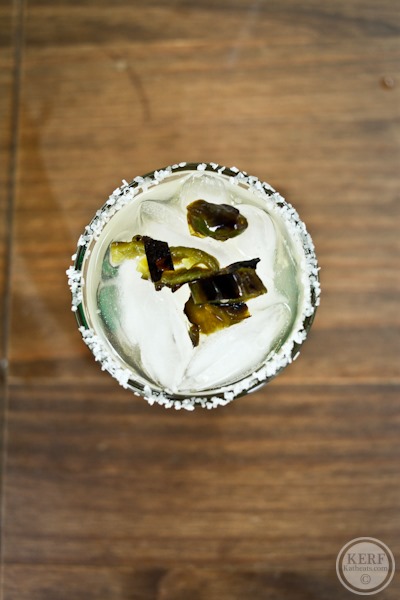 After a stir, we had perfection! The same great taste we love at Mono Loco. 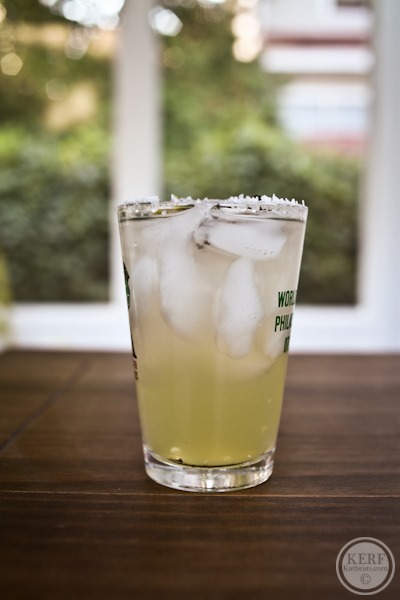 Here’s Matt with some math talk:

We were very surprised this worked, especially because it seems like so much alcohol and hardly any mix. But in measuring everything as it went in, you’ll see that it’s not what you expect. First off, the amount of ice displaces a significant volume. But there’s also something tricky about this mix method in relation to the shape of the glass.

At Mono Loco they serve this drink in a conical pint glass (the basic beer glass you see everywhere). The glass we used is an 8oz version with the same shape. Because there is so much more volume at the top, it shouldn’t be surprising that the amount of lime mix added is actually a lot more than the amount of triple sec.

The final mixture is 10:3:6 tequila, triple sec, lime mix.  In our 8oz glass, this came to 1.6oz tequila, .5oz triple sec, and 1oz lime mix.  That’s a pretty reasonable amount of alcohol for a mixed drink, though it does make me wonder about how strong those pint glasses at the restaurant are!

Make your syrup by dissolving the sugar in the water. Stir in lime juice. Add chopped jalapenos to lime mix. Fill pint glasses full with ice. Pour in tequila 2/3 of the way up. Top with triple sec to the 80% mark. Finish to the top with lime mix. Garnish with jalapenos. 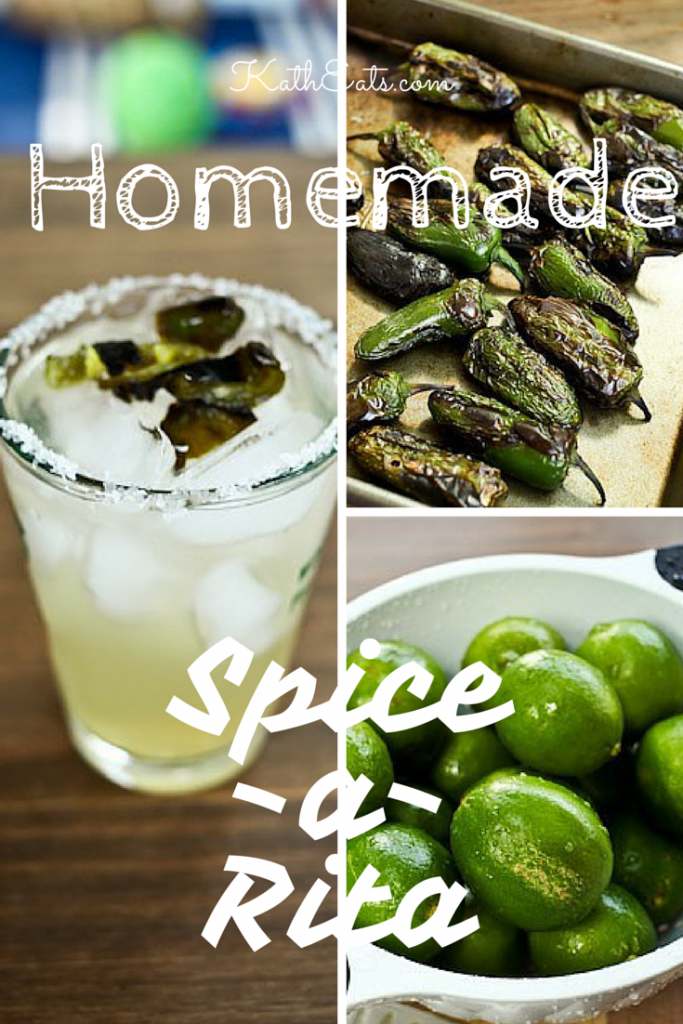 The real question is how strong is that jalapeno mix going to get as it continues to steep in our fridge!?

Cheers to my parents on their 36th wedding anniversary!