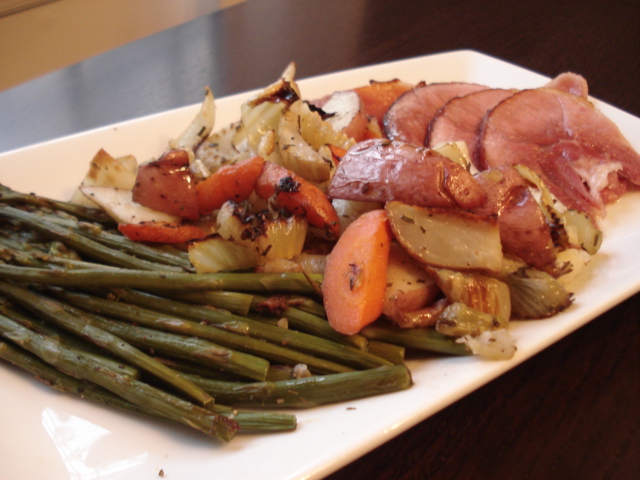 Dinner was delicious. The highlight was the fennel! If you have never had roasted fennel, now is the time to try a new vegetable. It’s kind of like liquorice – but in a good way! Sweet and just a hint spicy. And SO easy to chop and pop in a hot oven. Although it is scary-looking because it has onion-like characteristics, it is nothing like onion. But it took me a while to learn that!

Ham was good! We have TONS of leftovers – you’ll be seeing it again and we’re freezing a bunch too. I think ham is my favorite meat. It’s just got more flavor than Thanksgiving turkey and roasted chicken. More fat too though! Too bad. I had about a 3 oz serving (4 slices), but I actually left a slice on my plate. Although it tasted great, 3 slices was enough for my palate. 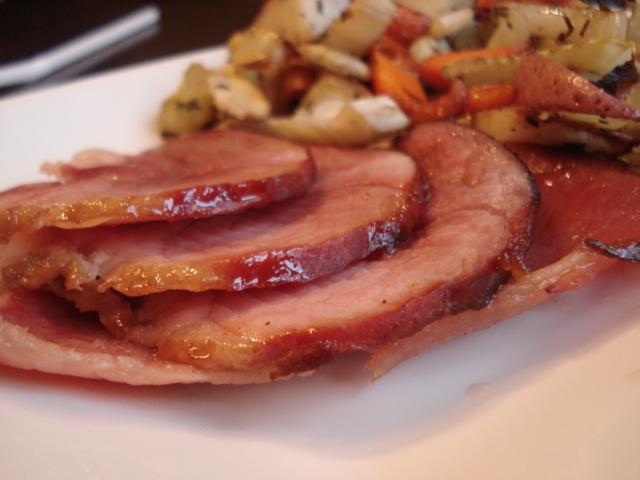 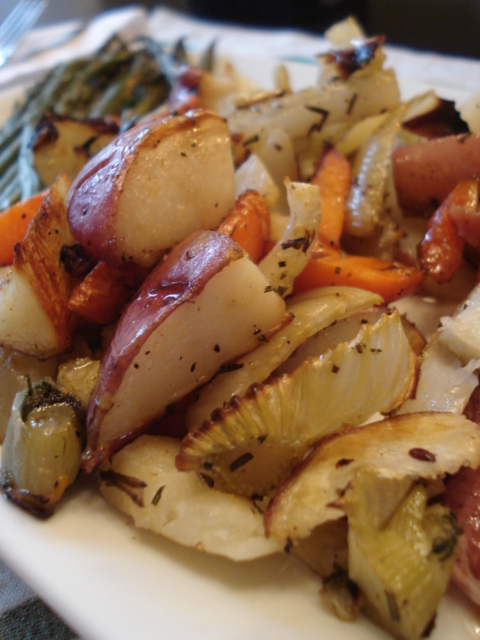 And asparagus. It was kind of thin and I think we overcooked it a bit – 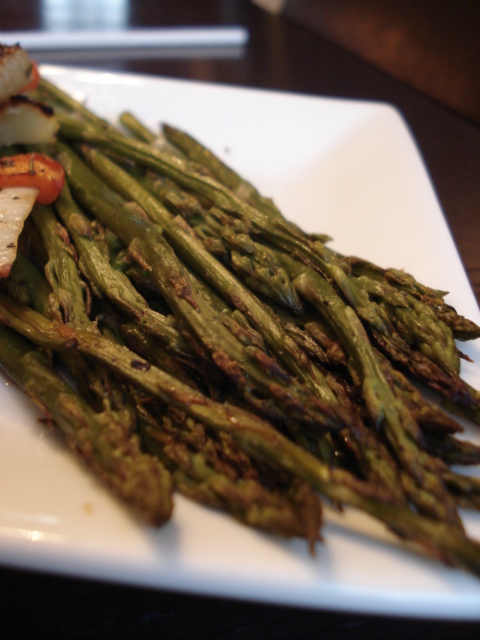 Seconds on Veggies! We had planned on splitting the veggies in half, but when they came out of the oven it looked like a lot so we each only had a third. But after eating my third I decided I wanted the rest of my half and went back for ’em! They were SO good. And I gave that last piece of ham to the husband. 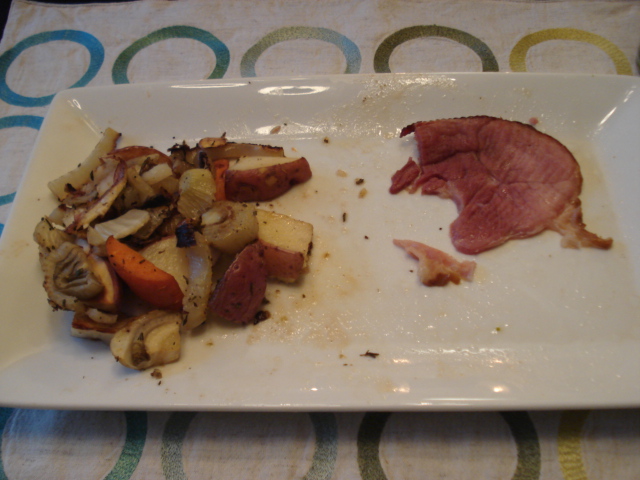 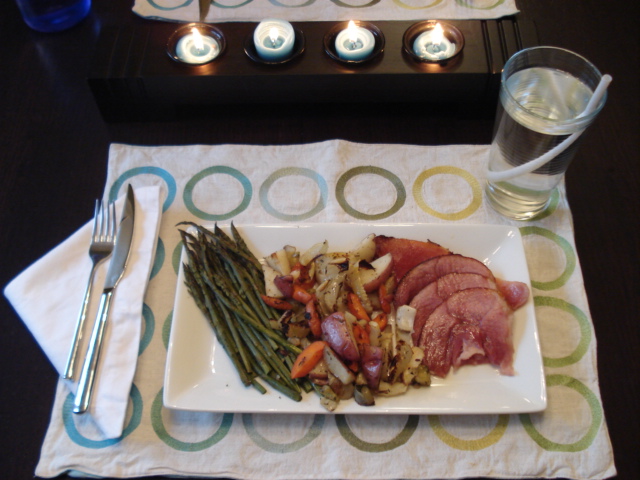 Including the whole half of veggies, this dinner was appx. 470 kcal, 16 grams of fiber and 25 grams protein.

So instead of a heavy pear tart, I decided on a light fruit crisp for dessert! With the tiniest bit of vanilla ice cream leftover from last weekend. I made single servings too, so it was light and we don’t have a bunch of leftover crisp to eat. Please pardon the ugly aluminum trays – we don’t have cute oven-proof bowls! 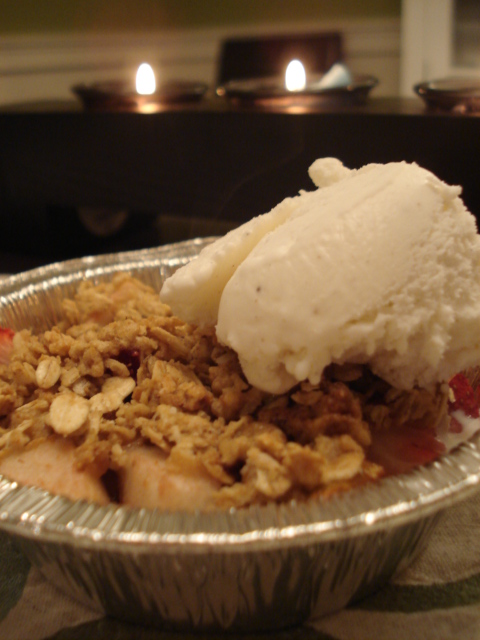 The base is 1 pear, about a cup of sliced strawberries, 1 tsp flour, and 1 tsp lemon juice.

The topping is 1/4 cup oats, 1 tbsp flour, 2 gingersnaps (crushed), 1 tbsp brown sugar and 1 tbsp Smart Balance. Put all in bowl and work into a paste. Sprinkle on fruit and bake for 20-25 minutes. 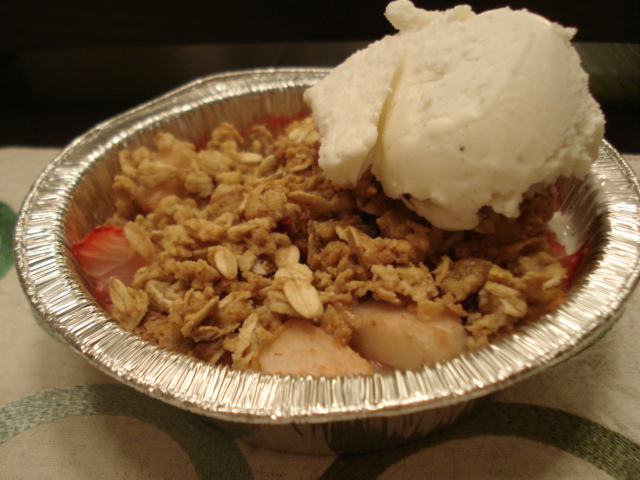 The husband said it was “the best crisp topping he’d ever had.” Maybe he was just being nice 🙂 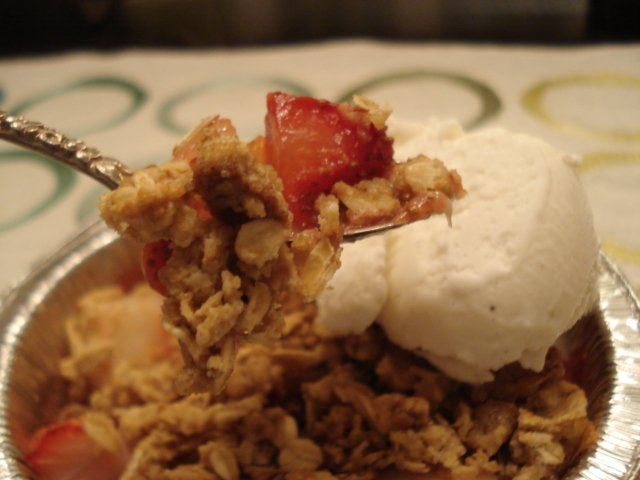 The dessert with 1/4 cup Breyer’s All-Natural Vanilla was 285 kcal, 6 grams fiber and 5 grams protein. Not bad for a yummy homemade dessert!

The husband made another round of crackers today! He added caraway seeds so they are rye-ish tasting. They’re also a little thinner than last time, so a little cruchier and less doughy (too bad for a dough-lover like me 😥 ).

I had about 10 of them for a snack – eaten off the cooling rack! 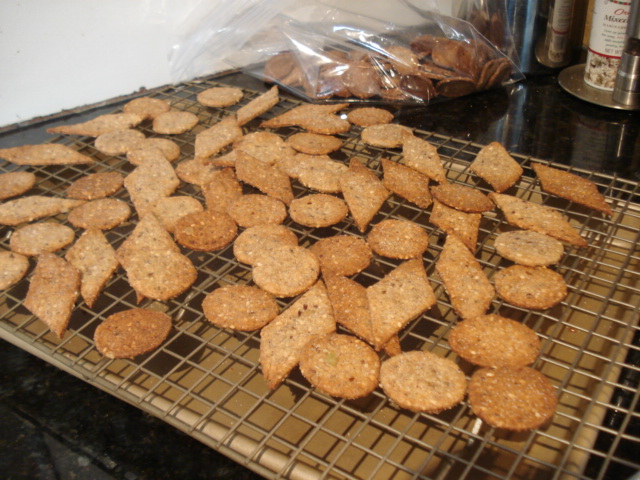 We also went for a nice 30-minute walk while the ham was cooking. It’s always nice to walk and talk together.

I enjoyed seeing/hearing about all of you food bloggers’ Easter dinners. It made me miss my big family celebration (Hi Mom!).