You are here: Home / Lifestyle / Dinner For Three

Was it a slow afternoon for you? 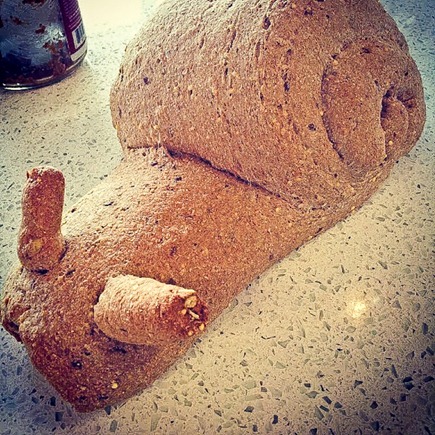 [Bread snail at the bakery!]

I went in to have a meeting with the Chief of Bread this afternoon. Came home and finished up a bunch of calls and things – there are a few things changing on KERF in terms of the way sponsorship manifests and things that I’ve been working on behind the scenes these days. Heads up! 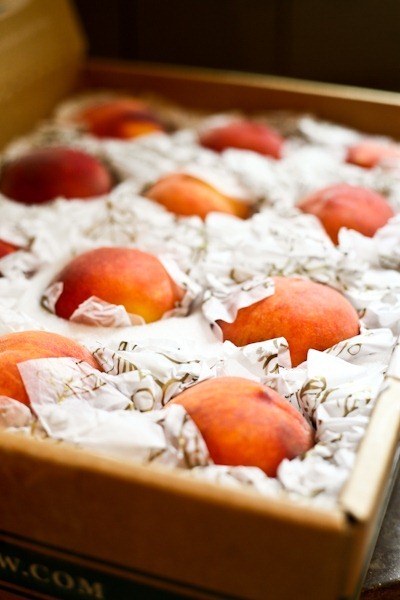 I also found a package on my porch when I returned – peaches from Frog Hollow Farm! Once a company gets your address, there’s no telling what will show up! But in this case, it’s always a welcome gift. Frog Hollow (who I have met at Foodbuzz many times) really does produce some of the best fruit in the world. Their pears are to die for, but I’ve never had their peaches! 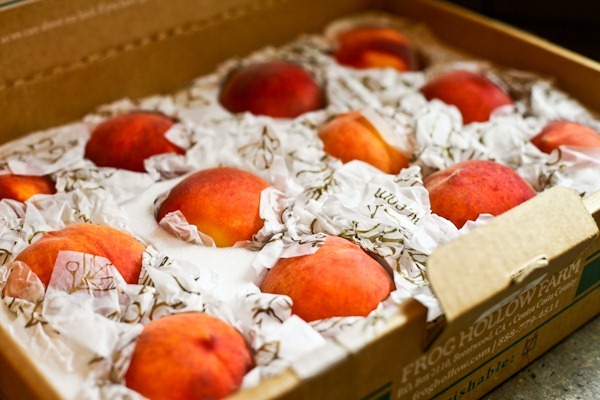 Dinner tonight was all on me, as Matt had to close and then went for a run. My goal was to have his dinner on the table juuuust when he emerged from the shower. Good timing! 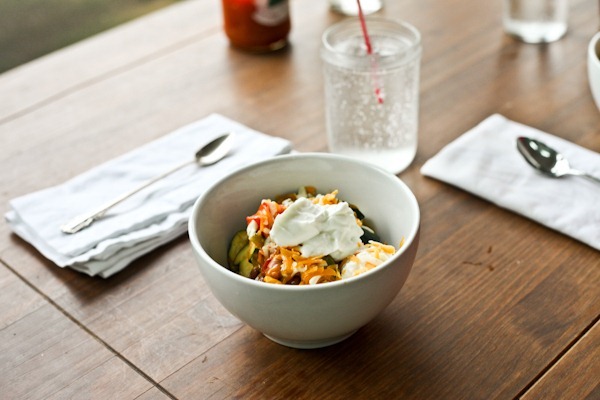 But somebody else got word that dinner was cooking and joined us at the table! 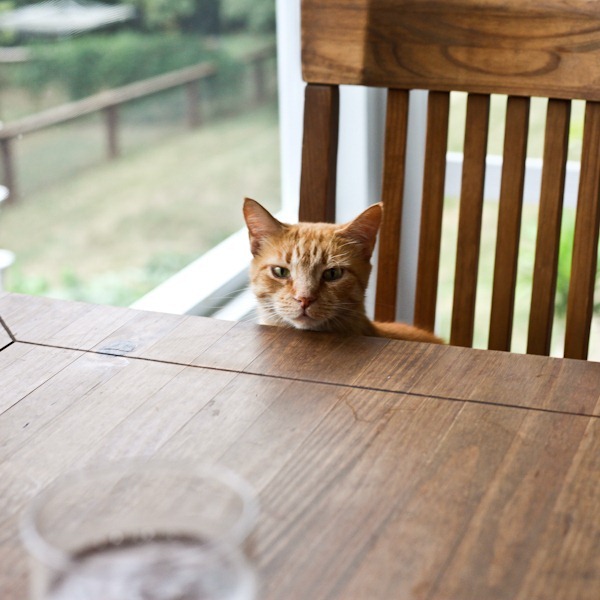 Dear me, what habits are we creating!? 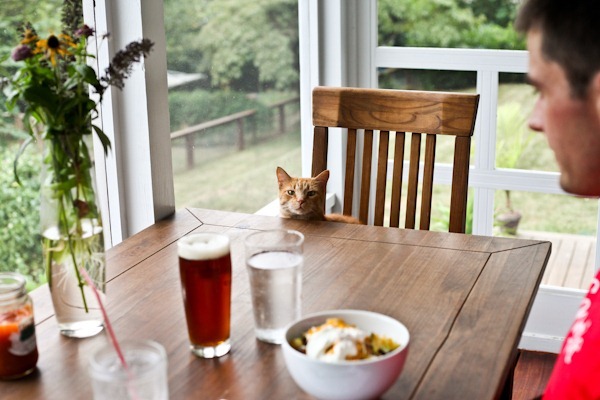 Matt eventually had to wave her away because she REALLY wanted a sip of his beer! [So did I…] 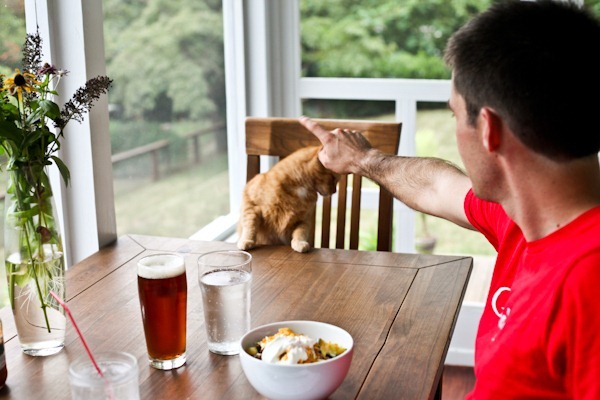 On the menu was a rice + beans bowl. I proclaimed the other night that we need to eat rice and beans more often. It’s one of my favorite vegetarian dinners! 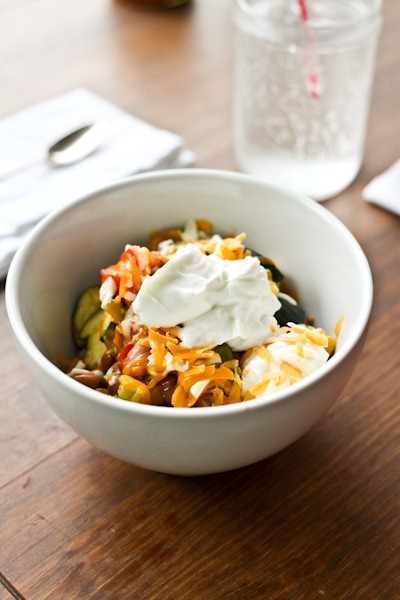 Inside the bowl was a base of brown rice (thanks rice cooker!) seasoned with nutritional yeast topped by a layer of sautéed zucchini, tomatoes and a can of pinto beans, which were seasoned with chili powder, smoked paprika and Garlic Gold Southwest nuggets. Cheese on top – and of course greek yogurt “sour cream.” 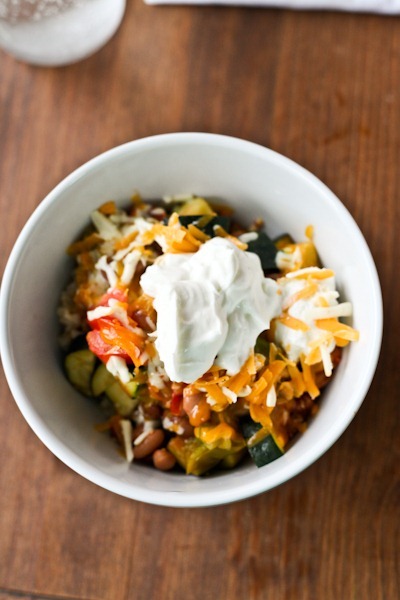 Black beans are so common, but they are actually one of my least favorite types of beans. The starchier fat ones are much more delicious: pintos, kidney, big white beans. 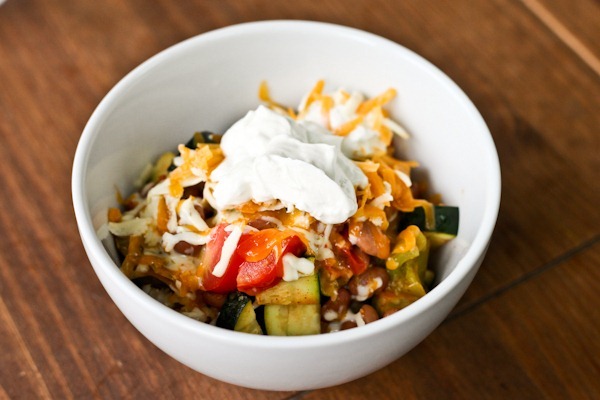 I’m thinkin’ bout a peach for dessert! And breakfast! 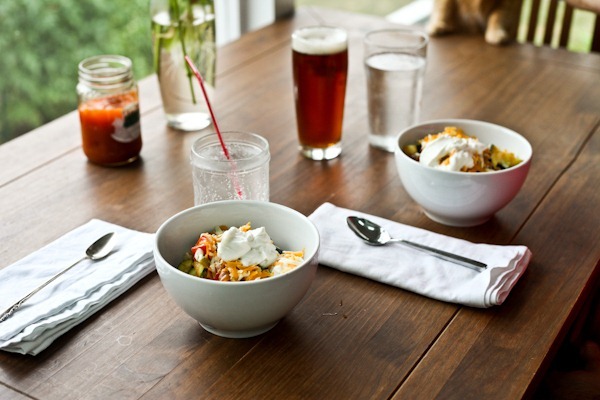