You are here: Home / Lifestyle / Day In The Life Of Matt

I received a bunch of requests for “more from Matt” in the KERF Survey. One in particular came up a few times: what does the guy eat all day!? Here’s a snapshot of the life of a bakery owner!

I was glad to learn that you readers were still curious about what I eat in a day – I think I’ve done at least a few posts like this and people seem to be most interested in how someone can eat healthy while owning a bakery!  I mostly feel like I eat what I want, but I also temper that with making healthy choices and considering what else I have eaten in one day.  I also believe in Kath’s squiggly line effect; without a doubt I eat better during the week and save some room for the weekend.

The day I documented in this post I went into the bakery around 8am.  Pretty much every day of mine starts with a couple cups of coffee. 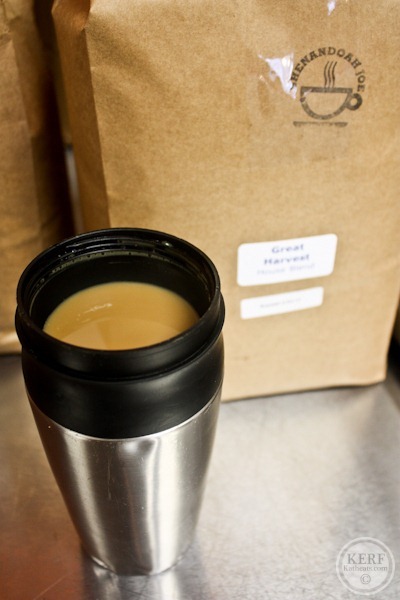 I’ve had this cup for way too long and it has a permanent coffee smell, so it lives at the bakery.  While I definitely notice increased mental clarity when I drink coffee, I don’t actually feel like I get much of a coffee effect.  By that I mean getting shaky, energized, or hyper.  In the past this has meant that I drank it continuously all morning but I’ve limited my consumption to two cups (12-16oz) per day.  Those are the only ones that really taste any good!

This morning was the first day this year we made Irish Soda Bread, so there were a few new employees who had never experienced it before.  I supervised the production.  Here are some kneaded, shaped, flour-dusted, and slashed dough balls before going in the oven: 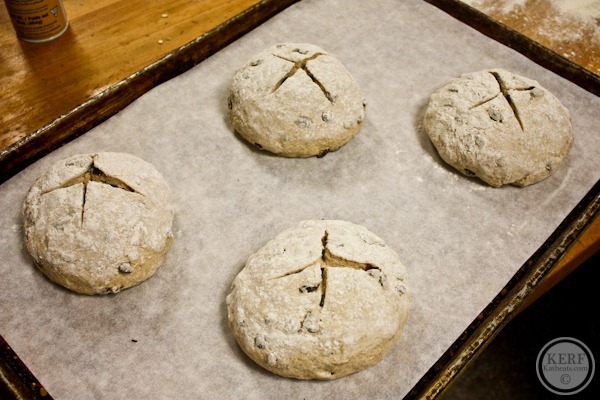 Irish Soda Bread is like challah and King Cakes – lots of interpretations of the truly authentic method.  The absolute requirements are buttermilk and non-yeast leaveners (baking soda and powder).  Raisins are usually included.  Traditionally it would be made with a mostly-sifted wheat flour.  This was as close to white flour as old millers and bakers could get.  We approximate this by using 50% whole wheat flour, and put a Great Harvest spin on it with some honey.  I really look forward to this bread every year – it’s tangy, sweet, and almost fruity/flowery from the raisins and honey.  Here’s the finished loaves out of the oven: 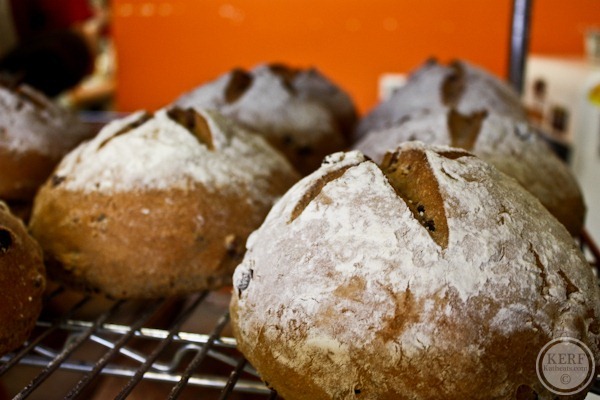 More breads proofing in the meantime: 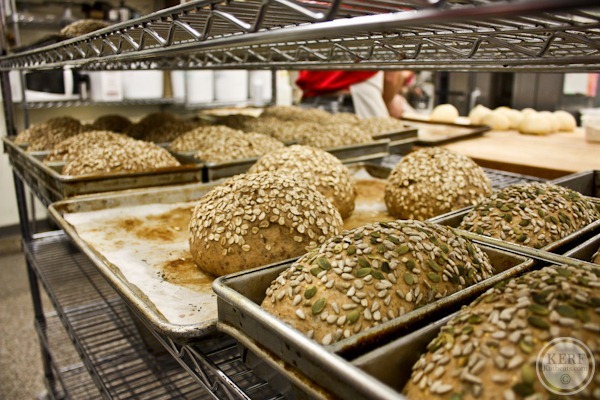 Breakfast is usually a lighter meal for me – I frequently feel like I’m still full from the night before.  A typical breakfast at the bakery is a big slice from one of the hot loaves out of the oven, swiped with a slab of butter.  We keep bananas and apples for employees to munch on, and I’ll frequently grab one of those.  Around 9:30a I had this hot ISB: 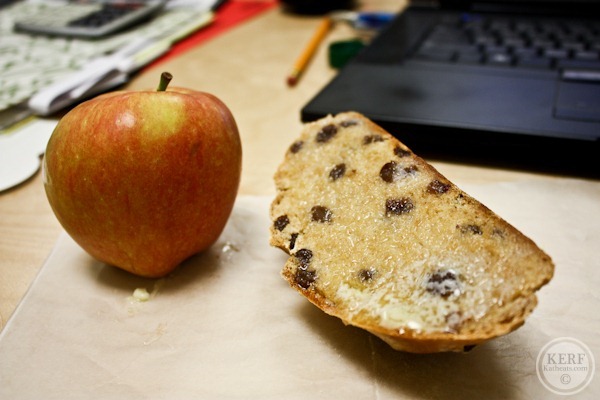 The bane of my tastebuds at the bakery would not be something sweet, but actually a hot loaf of Cheddar Garlic straight outta the oven. 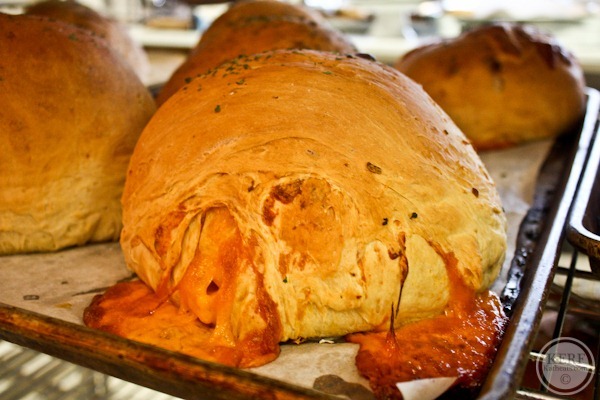 When I’m walking past the racks and I see those oozing “cheese chips,” I instantly salivate!  So I couldn’t resist a big slice around 10a: 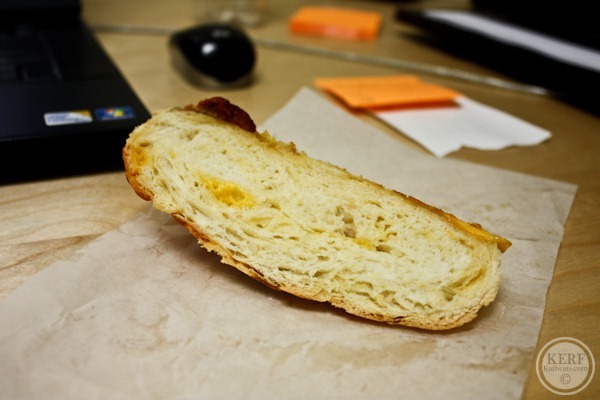 Besides the ISB instruction, my morning was mostly spent in the office.  I finalized the March menu and got the artwork to the printer, made the employee schedule for the next week, investigated Facebook ads for the first time and tried a test run with ISB, and reviewed inventory so I could place an order with one of our vendors. 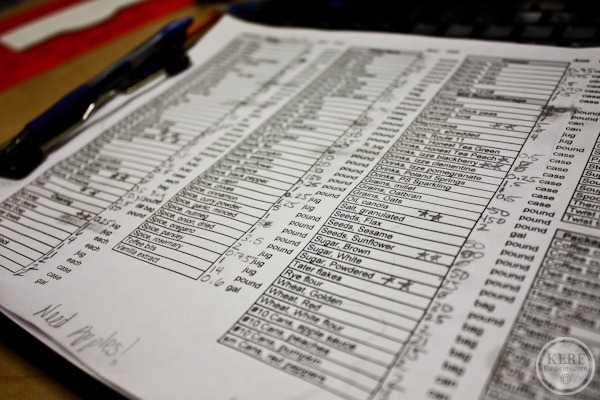 Around 1p I had a helper stop by! 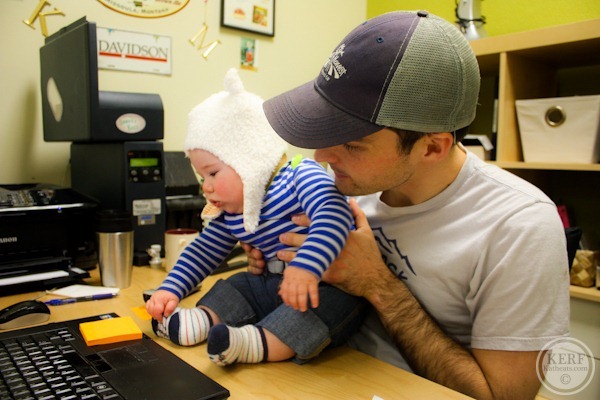 Best day ever when the family joins for lunch! 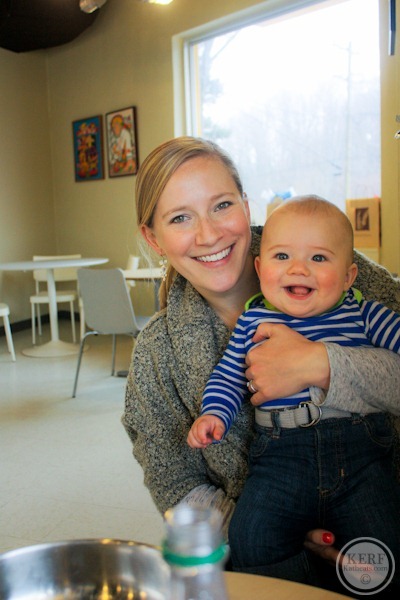 Lunch is my favorite meal of the day.  I love sandwiches – in fact, finding the perfect sandwich bread was one of the reasons I got into home baking in the first place.  I probably eat a sandwich for lunch at least four times a week, but today I used the ingredients at the bakery to make a salad. 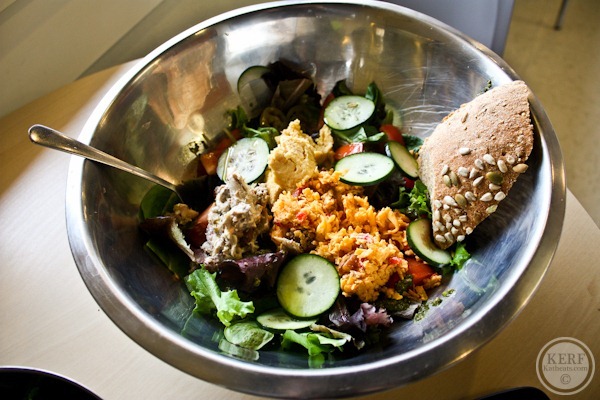 Nice salad bowl, eh?  We also buy spring mix or baby spinach for employees to eat, so what I typically do is put down a big mass of greens and pick and choose from our sandwich spreads.  This salad has some lemony-hummus, chicken salad, and (my favorite) pimento cheese.  I also tossed in some cucumber slices, tomato wedges, and a drizzle of pesto and EVOO.  Plus a slab of Dakota on the side.  Kath’s bowl was a little more elegant! 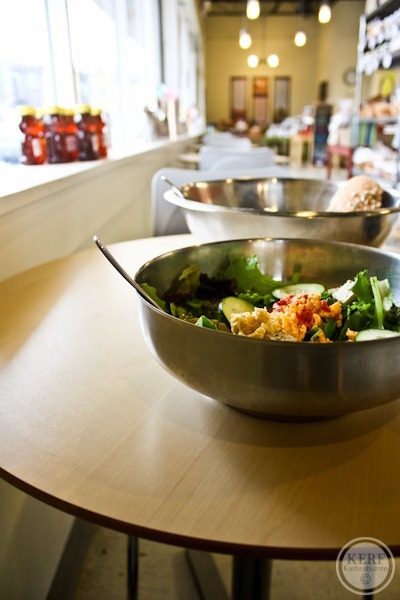 The perspective might be a little off in the pic because of the weird bowl but this is a pretty big salad, although typical for me.  I like big lunches as I feel the stretch until dinner is my most difficult.  That’s why I later had a slice of Potato Sourdough with pimento cheese on it! 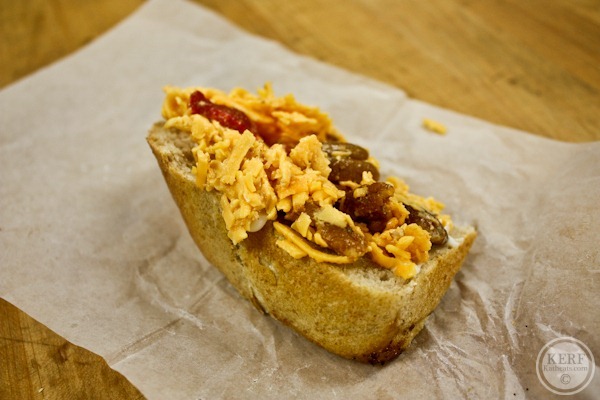 Not too much to speak of in terms of afternoon work except for bagging up a fresh batch of Double Fudge Brownie Mix (unbelievably gooey). 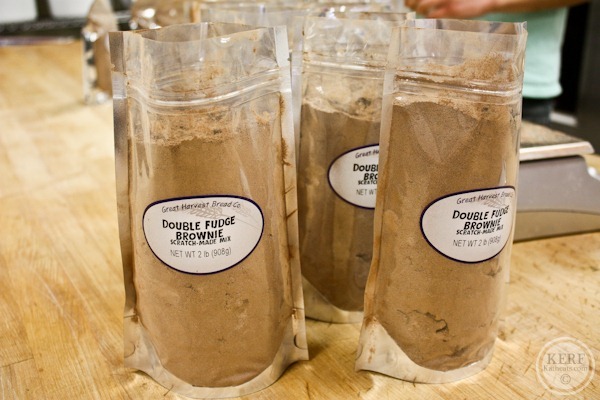 I tasted a piece of Savannah Bar at one point but forgot to photograph it – I’m not against sweets or anything, but they don’t tempt me too much.  Customers frequently say, “Oh I could never work here – the temptation!” but it’s easy for a few reasons.  First, I’m obviously motivated to sell the stuff to customers rather than eat it!  But more importantly, it’s not that you get tired of everything – it’s that it gets familiar.  I feel that part of the enjoyment of eating is tasting new and interesting flavor combinations.  When you’re so aware of how something will taste before you eat it, it dramatically reduces its excitement and pleasure.  These days most of my sweets eating at work is limited to tasting a bite of something to check quality, or maybe having a palate cleanser in the afternoon.

And now onto the beer!  How does beer fit into a healthy lifestyle?  First off I’m just going to be speaking my own thoughts here – no professional research included.  I also want to say that the reasons I drink beer have very little to do with nutrition – it tastes and smells great, it’s a social drink, and I feel connected to the history of civilization by brewing it. 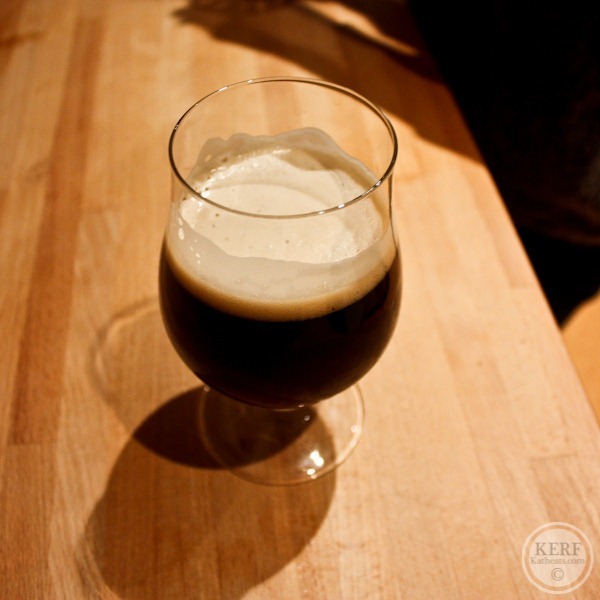 There’s a couple things that I keep in mind: while we frequently equate one pint of beer, one glass of wine, and one shot of liquor or a mixed drink, nutritionally there are some differences. I really do think of beer as liquid bread.  Beer is basically a big vat of dissolved carbohydrates, proteins, and a little fat.  There is still a good amount of fuel that our bodies can use for energy.  Wine and liquor don’t have nearly the same amount.

It’s a blessing and a curse to have beer on tap in our house!  It eliminates that feeling of commitment you get from opening one of your coveted bottles of beer you purchased.  It’s also great to be able to only have 4, 6, 8 ounces if you want.  But that first small pour can easily lead to a second!  Bottom line for me: I’m conscious that if I’m going to have some beer, I’ll be more restrained in some other area.  Because beer is usually consumed in the evening, I usually use breakfast to balance it out.

I had my evening “snack” while someone else had his! 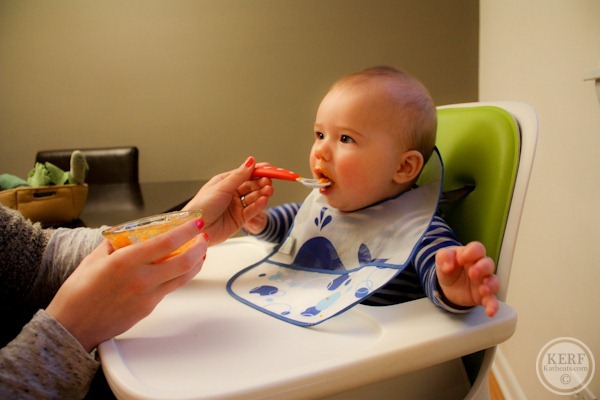 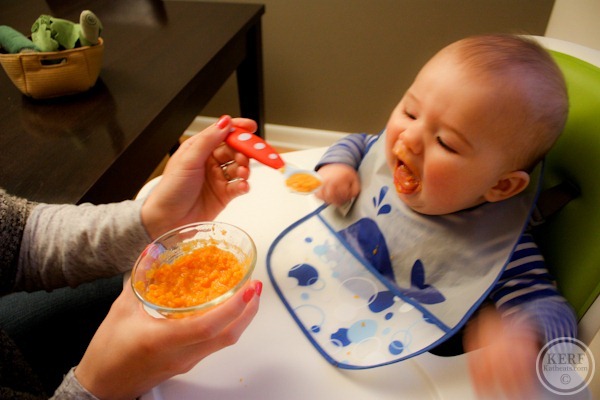 Tonight’s dinner was black bean enchiladas – the first time I’ve made them and I was pretty pleased!  I can see some good enchilada recipes coming down the road. 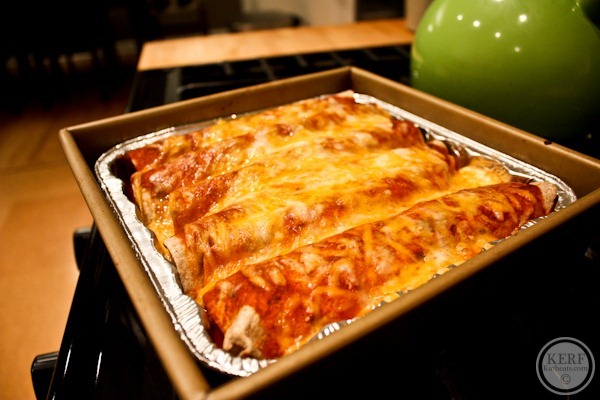 My dinner portions are about 10-20% bigger than Kath’s.  When we’re portioning out I just kinda eyeball a little extra on my plate. 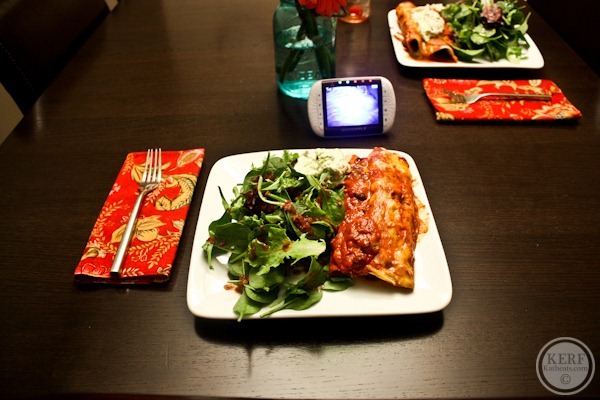 With a meal like this I wouldn’t break up one of the enchiladas for a bigger portion, but I had a suspicion that Kath would get full before she was finished.  And I was right – score an extra few bites from her plate! 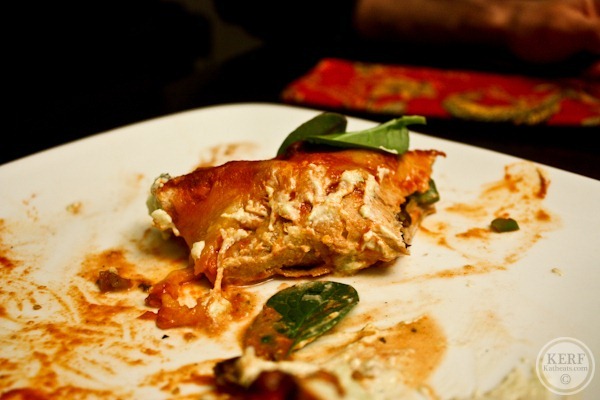 So that’s everything I had – Kath tells me I somewhat embody the intuitive eating mentality.  I mostly agree, although I think many of my eating decisions are more conscious that a true intuitive eater would be.  I’m really not into labeling diets, so my philosophy is to make balanced decisions on intake that are based on what I ate earlier and what I plan to eat later.  The one thing I’m attentive about is eating enough vegetables – I just feel that if I get something like 50% of my “fullness” from veggies I can’t go wrong.  And I never forget to love food! 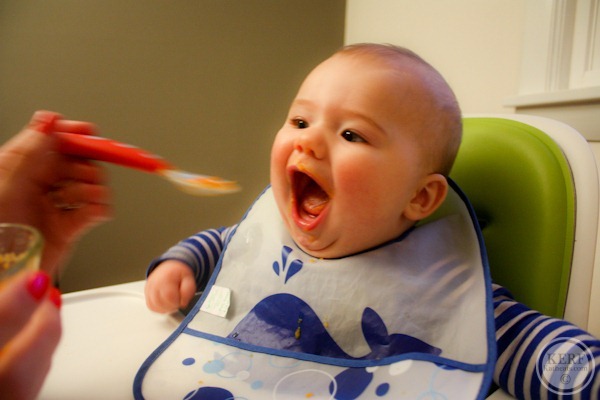