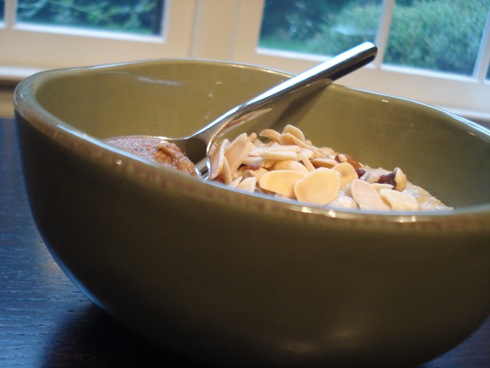 As it always is toward the end of the week, getting up this morning was no problem. I woke up pretty quickly and hit the gym solo by automobile. Once out of the garage, waiting through 3 lights, almost scared to death by a stationary police car, and parked (grrr I now hate driving there 😥 ), I was happily inside climbing the Stairmaster. I did that for 30 minutes (dripping with sweat!) and moved over to the ET for some lower intensity cool-down exercise and then moved from there and did 1 set of 15-20 of a hard weight on each of my usual machines: tricep pull-down, bicep bar, pull-ups, chest, shoulder press, push-ups and 1 set of abs, which I cut short because I am still sore from Mondays sets on the ab roller wheel!

No need for a pre-workout snack this morning – I wasn’t hungry (although I can always eat!).

Once home, showered, and having blown a fuse with my hairdryer 👿 (a new trend in this house), I sat down with a creamy bowl of oats. 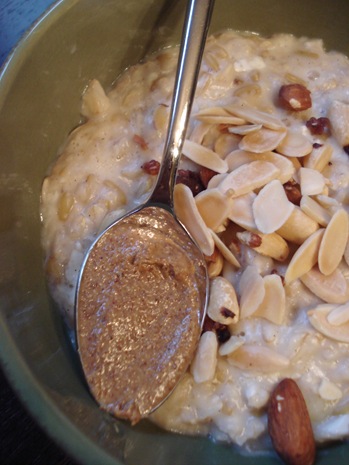 This bowl was SUPER creamy. I am not a huge cottage cheese fan in general, although my mom said I used to LOVE it when I was little. I mean, I like it a lot, but I know there are people who just live on the stuff. If I have a choice, I prefer yogurt. And I never think it sounds that appealing in oatmeal. But since trying it a few days ago, and since I’ve been seeming to have more cravings for it in general, I really, really like it! It definitely adds to the cream factor. 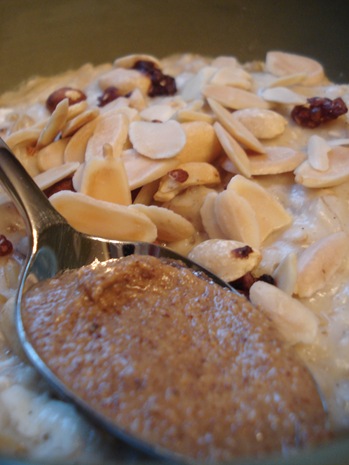 The husband made me an iced coffee! He has been making them all summer and says he uses just a small amount of coffee (for my caffeine problem), about a quarter cup of milk and mostly ice. I’m not a big fan of iced coffee in general (too cold on my teeth and usually too bitter!), but it sounded good this morning and i have to admit it was quite good the way he makes it. It’s almost kind of watered down, and I like that the coffee isn’t bitter. 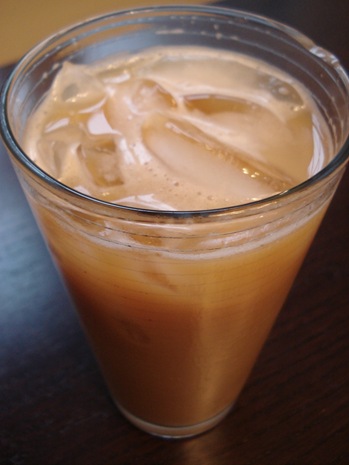 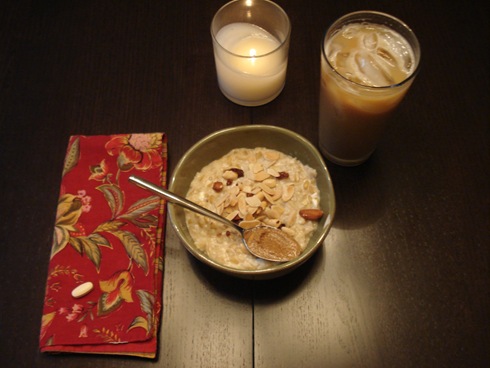 I am looking forward to today. I have my workout under my belt, I like my outfit, I took the time to do my hair, I have my 2  nutrition classes today (which is always fun 🙂 ) and NO TESTS!, and we have a fun event tonight, although it’s going to wear me out because we’re lightrailing it uptown and will be out kind of late.