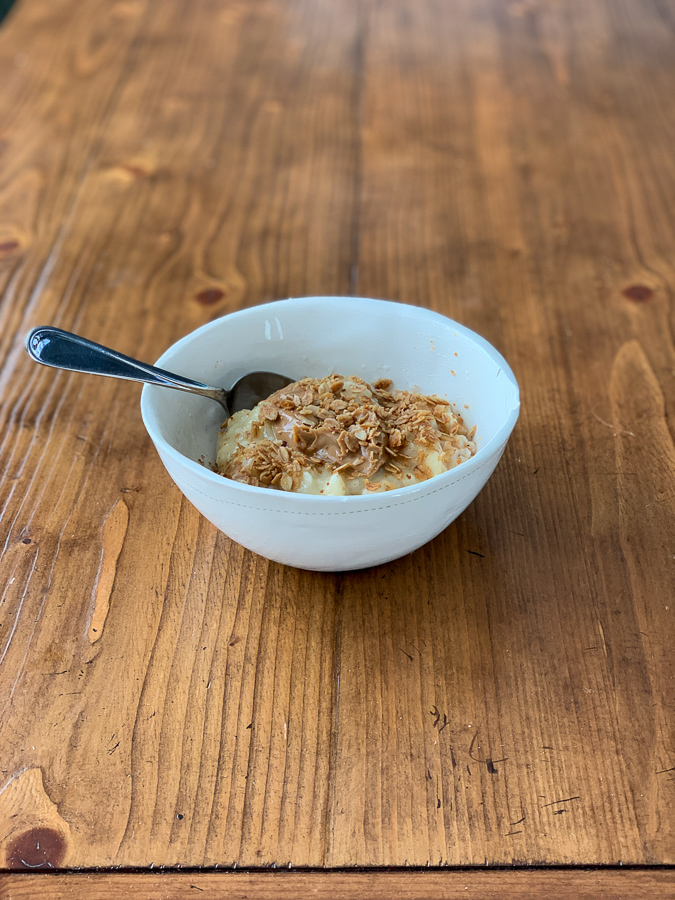 After I wrote about banana smash toast I was making oatmeal one morning, or rather assembling some steel cut oats I made in the rice cooker that I did not make with banana (because I think bananas get too brown overnight in the rice cooker). I started to slice banana on top of my oatmeal, because that’s just what you do right? And I thought – I should smash it into that smooth puree again.

Boy-oh-boy was that a good idea! I was able to dip my spoon into each layer – granola, PB, banana, oats and get a little of everything in each bite. Texture fans: this was a great combo! 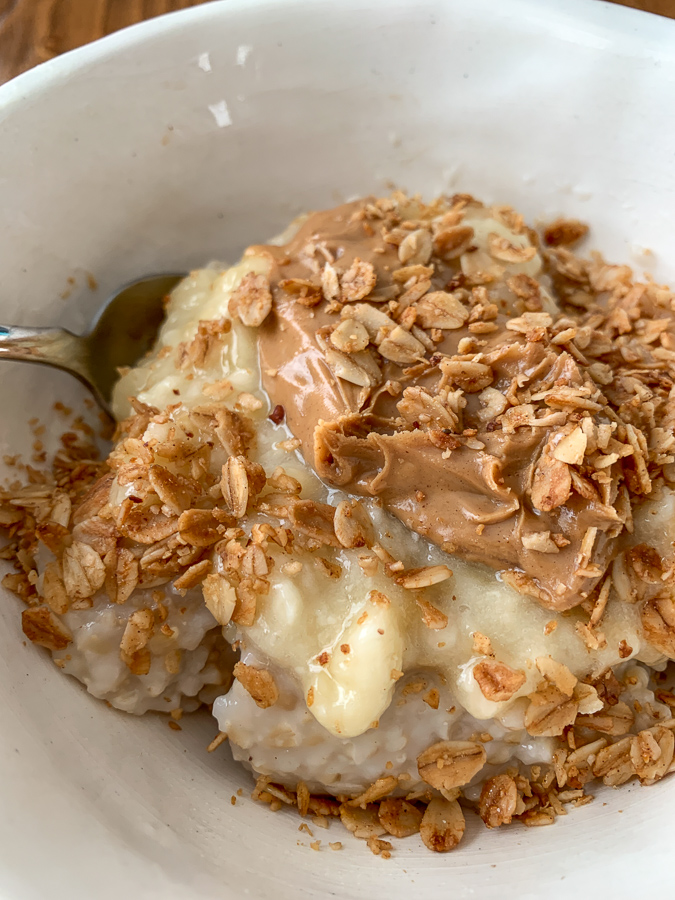 Remember when I wrote this post about clean sweat? Back when B was so little, I was wearing him a lot of the time. Naps were SO unpredictable! I never had a good time for a home workout so I would take a shower, put on athleisure, and hope for the best.

I Do My Most Important Task First

Because our first nap of the day is the most reliable, I always try to do the most important task of my day first. I flip flop back and forth between getting work done and then doing my workout later in the day or doing my workout first and fitting work during subsequent naps, which may happen during lunchtime and/or after Mazen is home from school.

In Kath’s Hierarchy of Needs, workouts are a higher priority than working on future blog posts, recipes, etc. because I never procrastinate so I’m usually just chipping away at a list. I also have babysitter help a few times a week and try to batch write during those times. Thus, I decided that workouts should come first.

We get up sometime between 6:30 and 7 and Birch’s wake time is about two hours. After nursing, I put on my workout clothes and we head down for breakfast. I do a little bit of computer work – emails, etc. – if he’s happy in his bouncer or on the floor blanket.

I also eat a little something, as I would rather be too full than too hungry for a workout. If we’re down on the earlier side I will eat a full breakfast, but sometimes if we’re running late and nap is creeping up I have half a breakfast so my stomach isn’t too full and then have the other half after.

The Second He Falls Asleep I Run Downstairs To Run!

As soon as I am sure Birch is asleep, I run down to my treadmill. All of the other chores can wait until he’s awake, but it’s hard to focus on a workout. By now I’ve had 2 hours to wake-up and get going, a full cup of coffee, some breakfast, and I’m usually ready for a good sweat. B’s sleep cycle is around 33 minutes and my workouts at minimum 30 minutes (doing the iFit French Polynesia program!) so I am fairly confident everyday I won’t get interrupted. If he makes it through his first sleep cycle sometimes I keep walking or do a second workout if I’m feeling especially zesty!

Either 30 Minutes or 2 Hours

On a good day, he’ll sleep for 2 hours and I have time to shower, have a snack, do some chores, AND get a little work done. On a bad day – at least I can get in my 30 minute workout. He’s usually pretty happy sitting in his seat during my shower when that happens.

The Consistency Is Great

All this to say: I found a pretty solid routine for getting my workouts in consistently everyday. Getting that boost of endorphins first thing really makes a difference in how I feel for the rest of the day. It’s also great that I take one shower and am dressed and ready for the day. Anything else that needs to be done can fit in the cracks of the day! 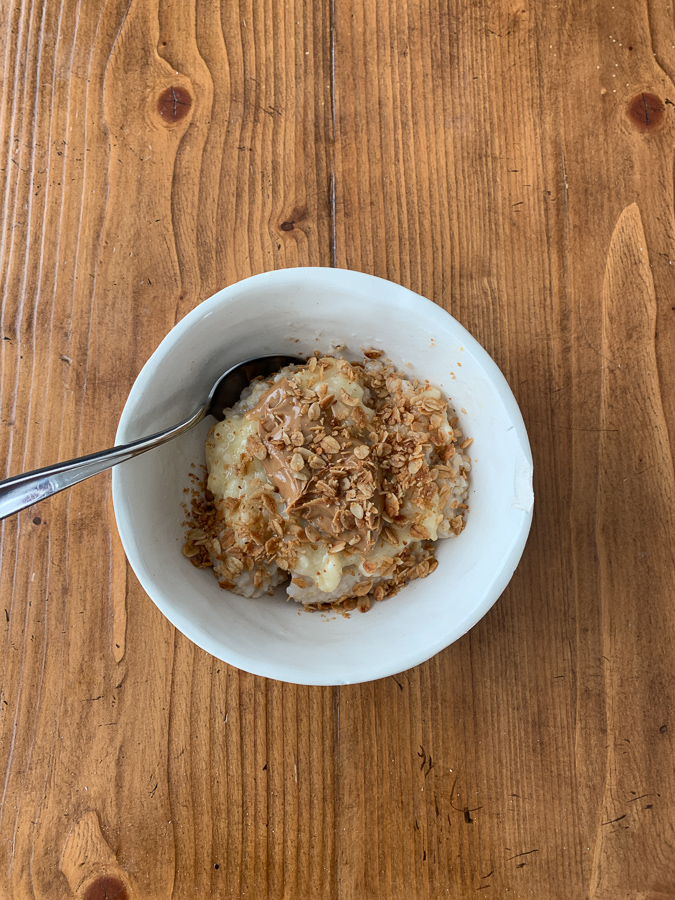