You are here: Home / Restaurants / Adventures in Marriage

We passed a billboard today that asked the question: "What have you done for your marriage today." I don’t remember what company was behind it, but the question became our joke of the evening. Matt held my hand at the mall, folded his shirts and picked the onions out of his root vegetable hash at dinner <3

We had so much fun out shopping today. Often I try to squeeze shopping into a block of time and feel rushed, but today we had all afternoon and planned to go straight to dinner, so it was much more relaxed than usual and so nice.

First stop was Kohl’s, where Matt had a birthday gift card from his mom! I had about 3 items in my hands to try on and ended up just putting them back on the rack and walking away. Kind of wishing I’d tried them on now! He came out with 3 pairs of pants. 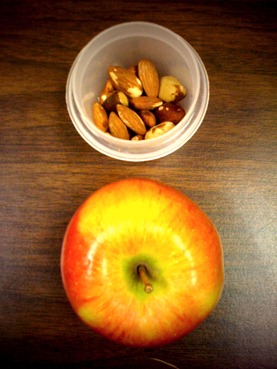 Then we walked in the same shopping center over to Old Navy where I heard there was killer workout clothes sales. Sadly the yoga pants were all picked over, but I found two wicking tops for $15 a piece. [iphone quality here!] 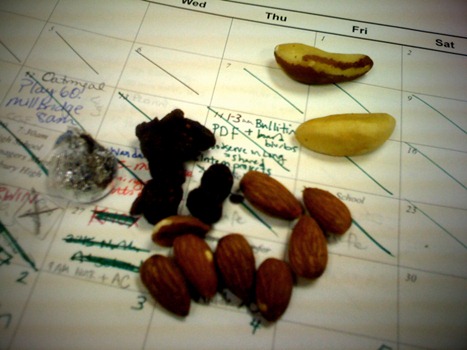 Next stop was Lowes, where we got some estimates on our home repairs and found out that storm windows are not made anymore except by special order 🙁

Lastly, we went to the mall, which was boppin’ with people on a Saturday afternoon. It was fun to actually hang out at the mall and not be on a mission to find something important. We spent time playing in the fragrances (I’m currently doused in Armani Code, which I LOVE) and then went to Banana and GAP where Matt got a pair of gloves with one of his gift certificates and I got some leggings with mine. Clearly so very enthusiastic about those leggings.. 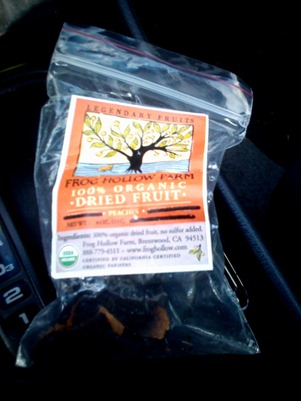 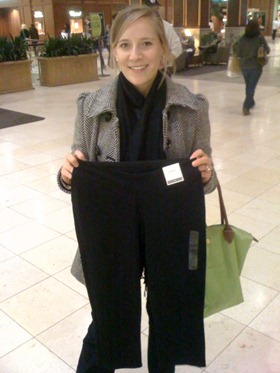 Next stop was an impromptu dinner with Kate + Nate and Kelsey + Eric!

Kelsey recommended we try a new restaurant called Savor. TOTAL diamond in the rough!!! Just go check out that menu. So many delicious ingredients.

I want this painting in my house: 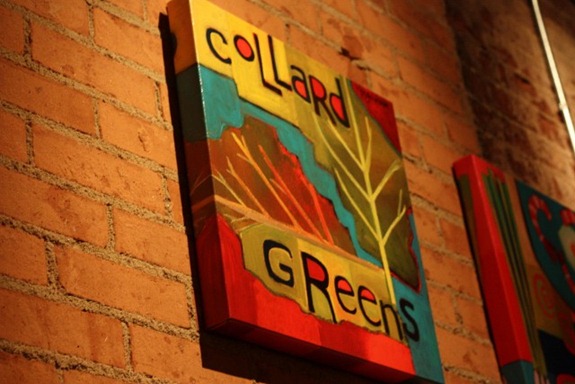 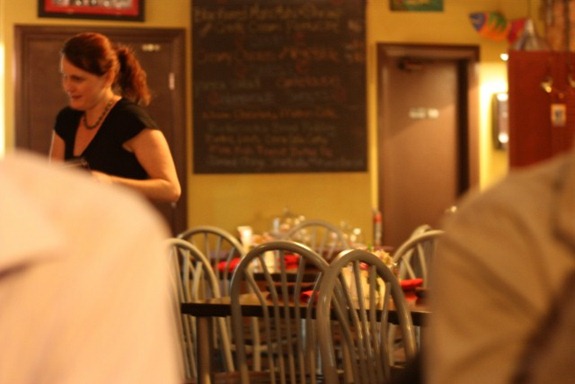 I started with a juicy glass of organic malbec 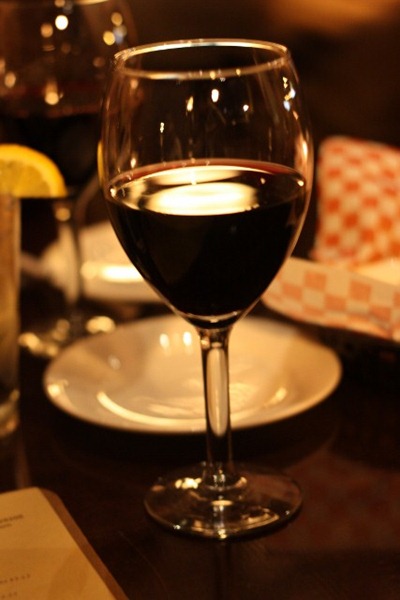 And we debated what to try 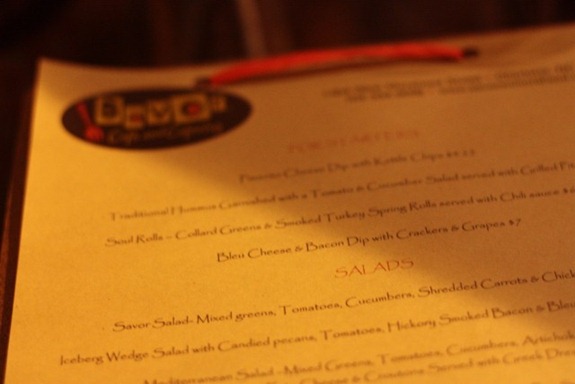 We had great service tonight – some of the best I’ve had in a while! We were greeted with grilled sourdough and chive butter. I had a taste 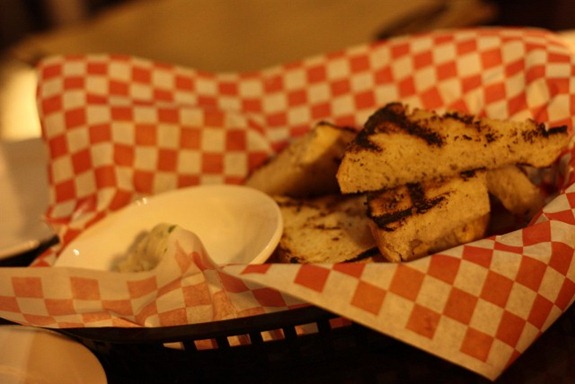 Matt and I had to share the Soul Rolls [collard greens & smoked turkey spring rolls served with chili sauce]. I had a roll and it was nice and doughy, although I have to say I thought the collard greens were going to be the shell and was a bit disappointed they were fried since it didn’t say fried on the menu. 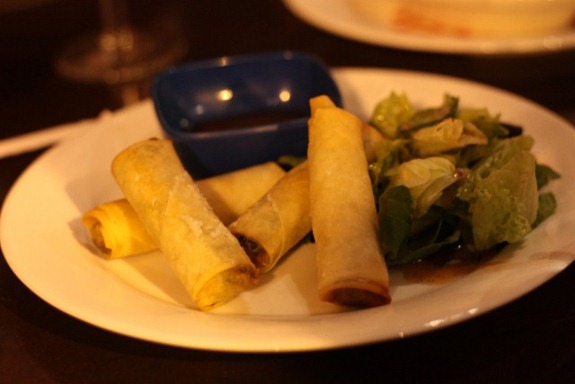 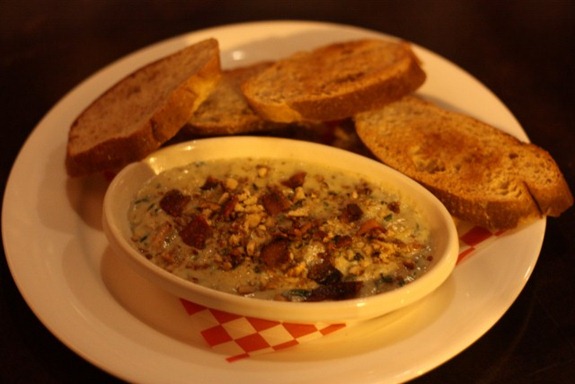 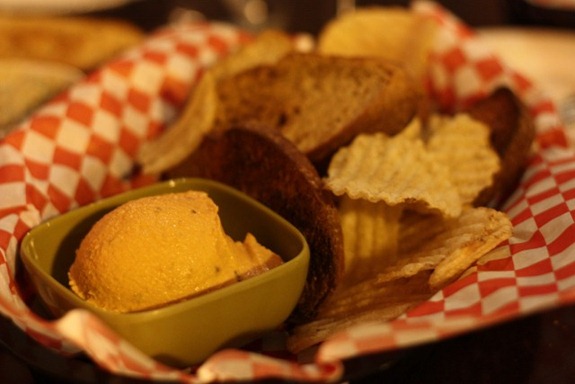 It was really good! Pureed instead of grated, but still had that wonderful flavor 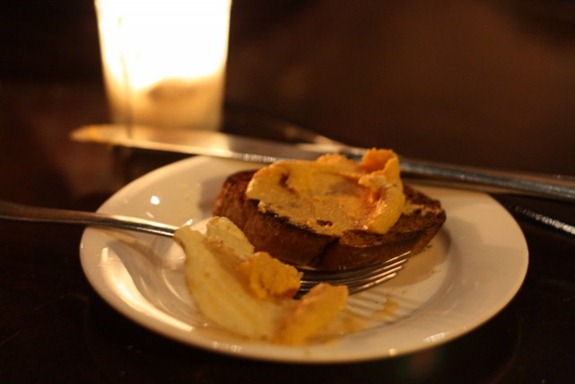 Kate + Nate also shared a bite of their hummus 😉

For dinner I ordered the Savor Salad [Mixed greens, tomatoes, cucumbers, shredded carrots & crispy chick peas] with Pan-Seared Salmon on top and the Honey Dijon Vinaigrette. The dressing was out of this world good! The salad was good too – I love any restaurant that serves a hearty salad! The salmon wasn’t bad, but I’m not sure if it was wild-caught because it didn’t taste as rich as I’m used to. 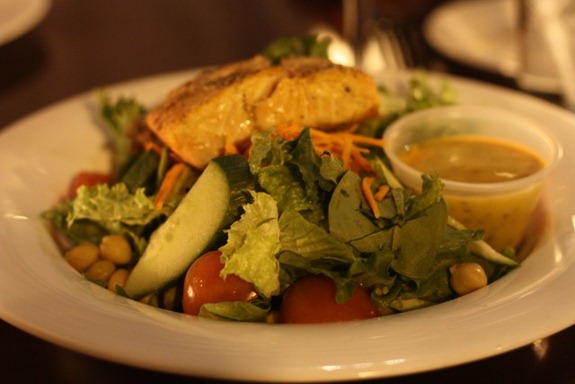 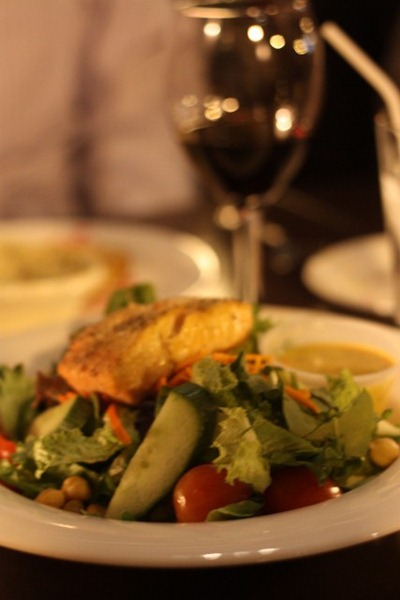 Matt got the pan-seared chicken with pimento cheese, root veggies and drunken collards. Amazing all around!! The chicken was superb, and he gave me two bites. Sadly we left or leftovers on the table 🙁 🙁 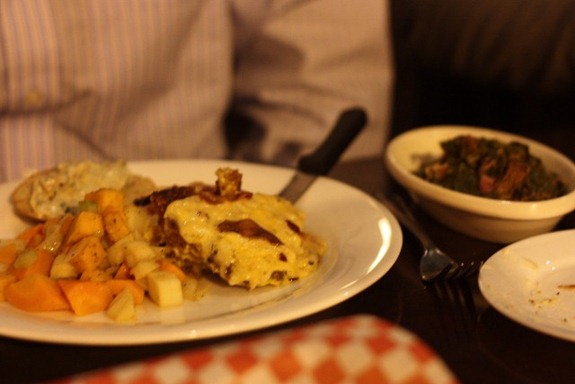 The desserts were homemade, but no one had room thanks to all the apps. We wafted the Butterscotch Bread Pudding on our way out (per the server’s recommendation) and I’m definitely going back for that!!!

Blog is written. Time for relaxation! So so thirsty!