You are here: Home / Lifestyle / Worn Out.

Guf, it’s been a loooong day!

I spent 5 hours this afternoon glued to my computer working on lab reports and case studies. I am worn out mentally and my right wrist is killing me. I got terrible boredom munchies at 4:15 and prepared this crunchy snack bowl filled with Quaker Squares, trail mix, peanuts, almonds and apricots – 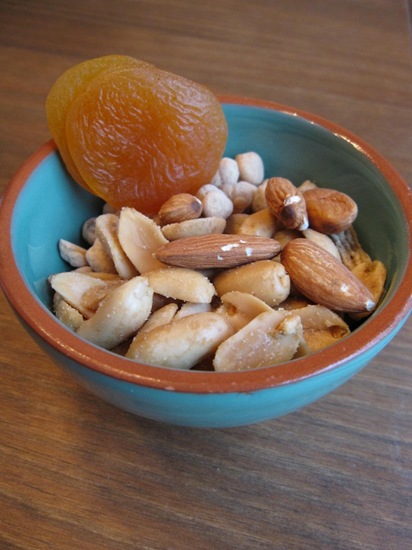 + about 3 cups of tea. As soon as I started eating the bowl I said to myself “I’m going to go have refills on all of these” but then I was so busy that I didn’t want to get up from my chair and 30 minutes later all the cravings had passed. And then despite having the snack an hour earlier than usual, I wasn’t hungry for dinner! 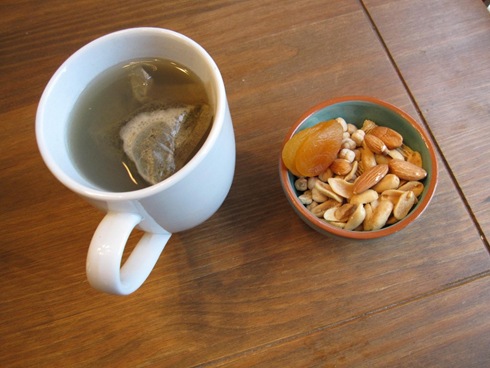 When I finished project #3 at 6:30, I felt like having a glass of wine to watch with a movie, but at the same time I didn’t really want one nor did I really want to watch a movie. I think when it came down to it, I just didn’t have the energy to do either! Hopefully I’ll be out of the post-shot lethargy tomorrow.

Somehow I did have energy to make a fun dinner. Cooking was the only thing I felt like doing. 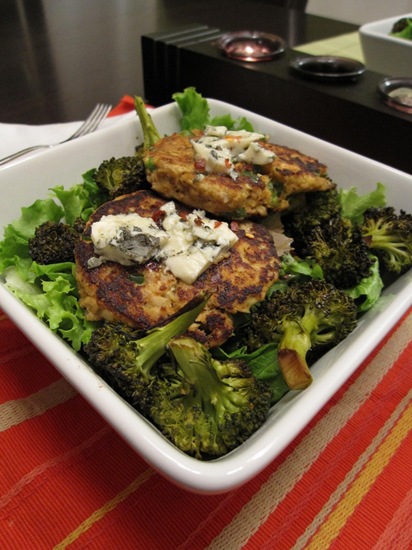 Salmon Cakes with Gorgonzola over an Avocado + Broccoli Salad 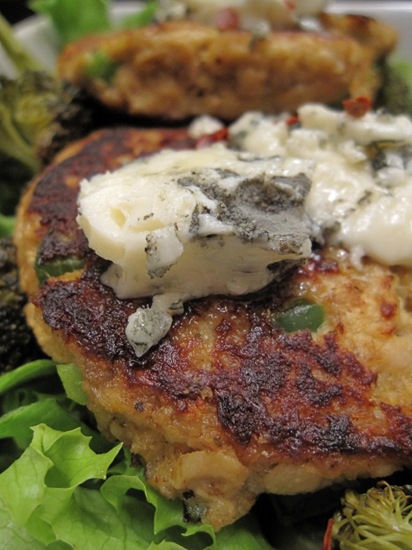 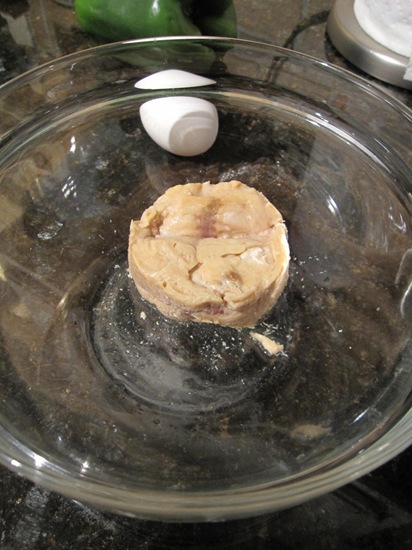 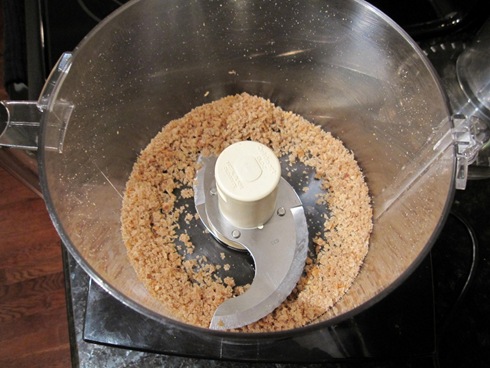 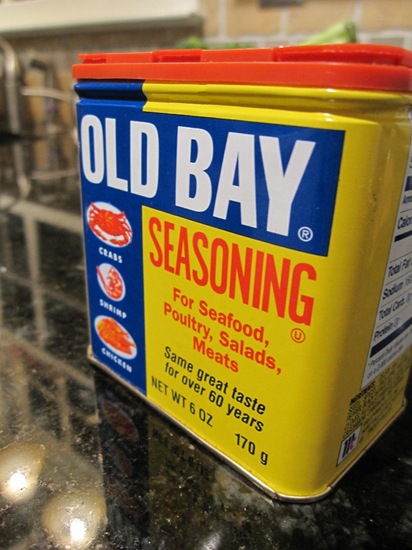 To get to this. Then I portioned this into 4 cakes, which were quite wet and I thought they might not turn out. But when plopped on a pancake griddle in a 1/2 tsp of EVOO each, they turned out perfect. 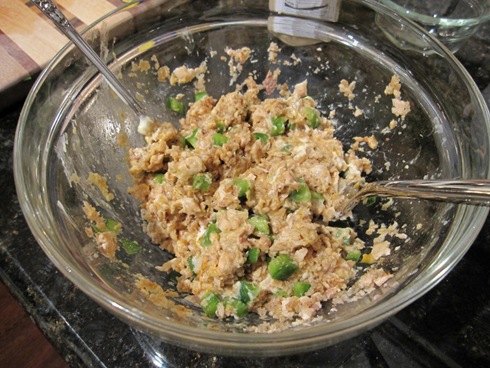 We served them over a bed of green leaf lettuce tossed in fig balsamic vinegar and lemon olive oil, some balsamic roasted broccoli (just toss broccoli in syrupy balsamic + kosher salt and roast for 20 minutes at 400*) and some avocado, which is hidden in there all drab brown from being in the fridge too long. 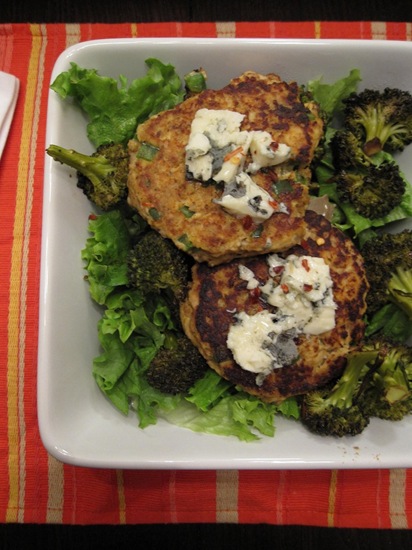 My only complaint was that the Old Bay was sooooo salty, so next time I might use less of that and more things like paprika. 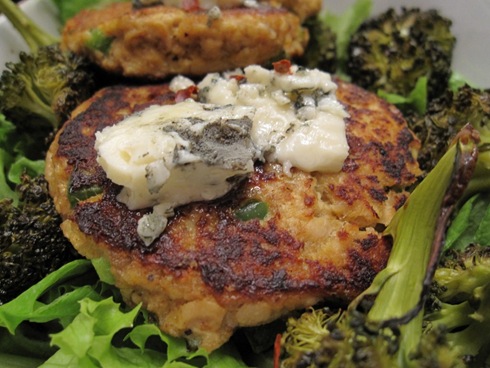 Matt had two pieces of wheat sourdough as a taste test (they were baked differently) and of course I had a few bites because it was too good to resist. 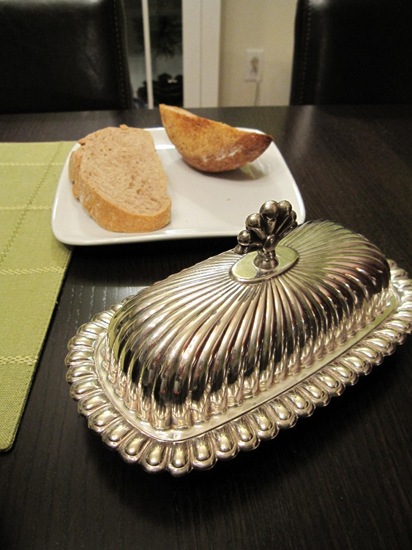 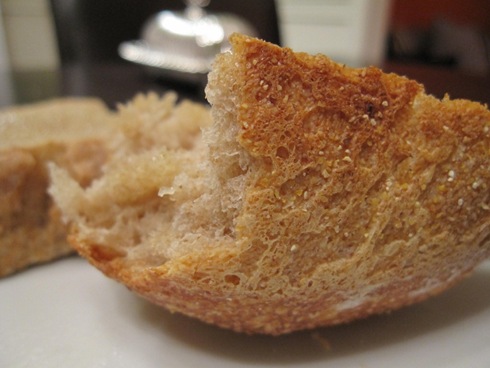 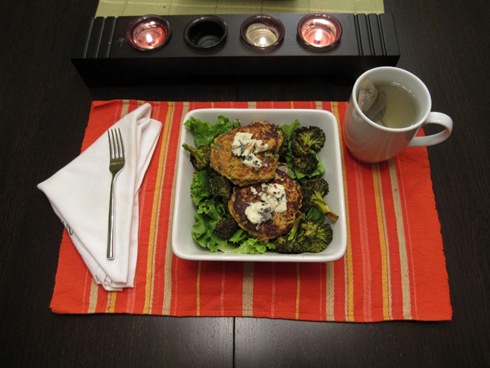 I’ll be working on more projects. Probably eating oatmeal, doing  yoga, etc. And maybe I’ll have that glass of wine!

As for tonight, I’m thinking a bath and maybe some yoga….but I might just want to go read in bed