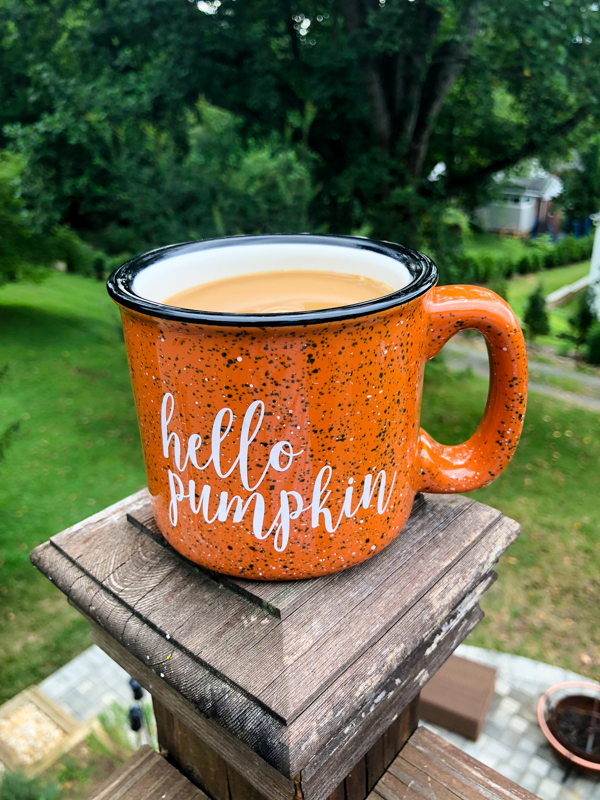 We had a break in the heat this weekend, and dare I say I was even chilly on Saturday night?!

I brought all my swim stuff to camp pickup but Mazen said he just wanted to go home and snuggle on the couch. Fine with me! I laid down and he inserted himself and his bowl of pretzels in the most convenient places 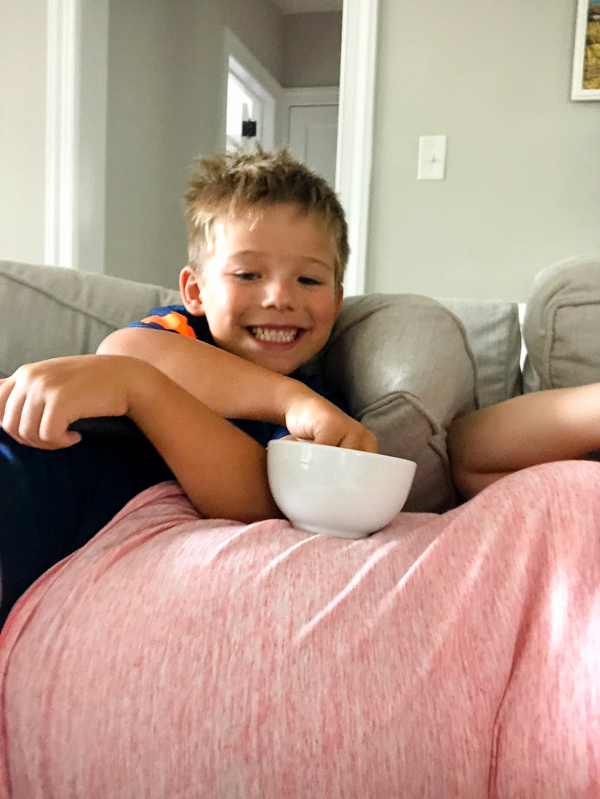 We made this Blue Apron meal for dinner – Ras el Hanout Chicken with Farro Salad and Cucumber-Yogurt Sauce. It was amazing!! Loved the figs in the farro, the cucumber yogurt, and the spices on the chicken, which Thomas grilled. Adding it to our remake list. 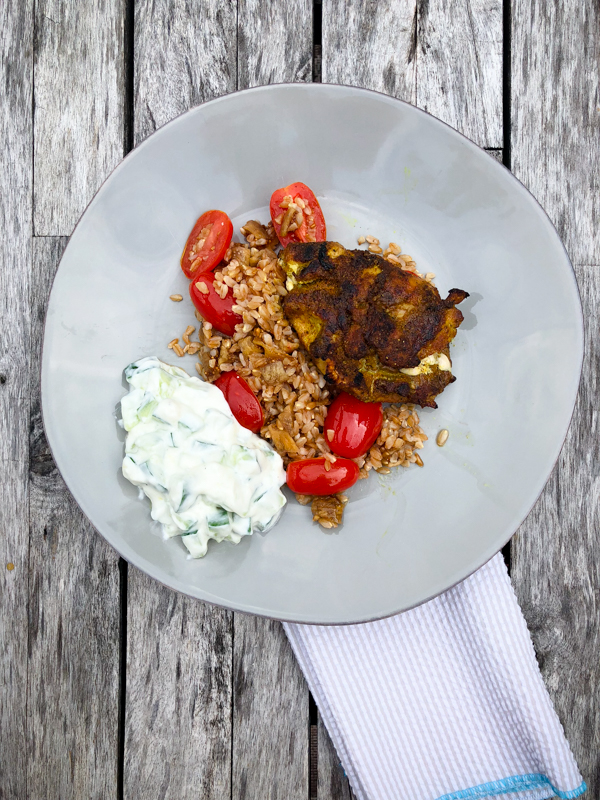 His legs are almost as long as mine!!! 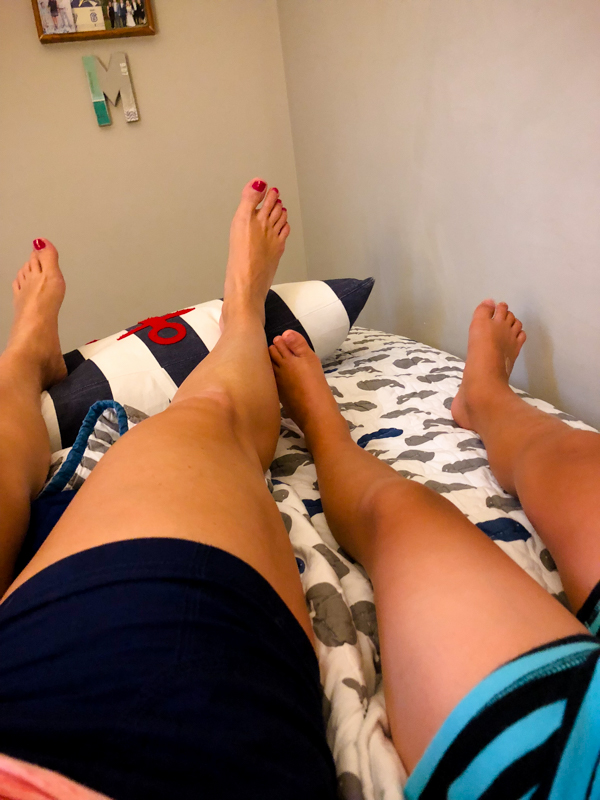 On Saturday morning I surprised Mazen with a trip to our new Sugar Shack Donuts!! The donut shop started in Richmond and now has a dozen stores across Virginia and DC. 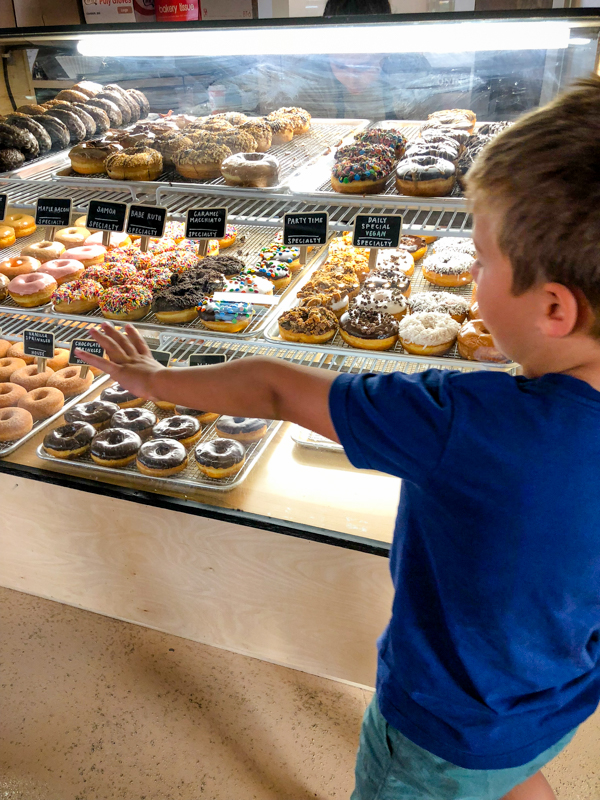 I loved how many flavors they offered! The only ones missing were the jelly and cream filled. When I was younger (still am – hahaha!), my family used to get donuts from a shop in Kure Beach, NC on every visit. They were the best donuts in the world, and so far nothing has compared to the yeasty sugar-coated raspberry filled donut I used to love. 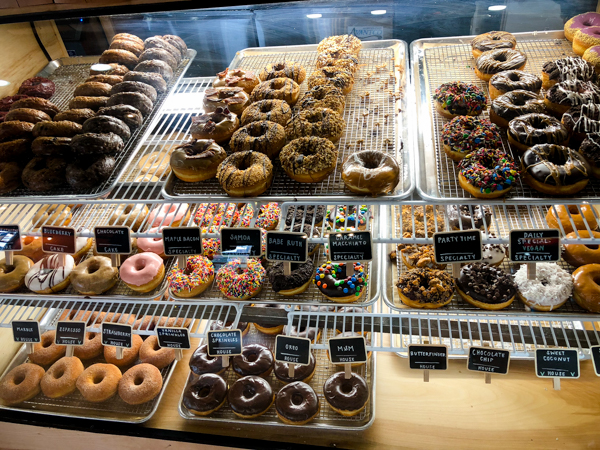 But these were very good! We cut them into quarters and had a taste of all the flavors. (With some leftovers that we nibbled through on Sunday!) 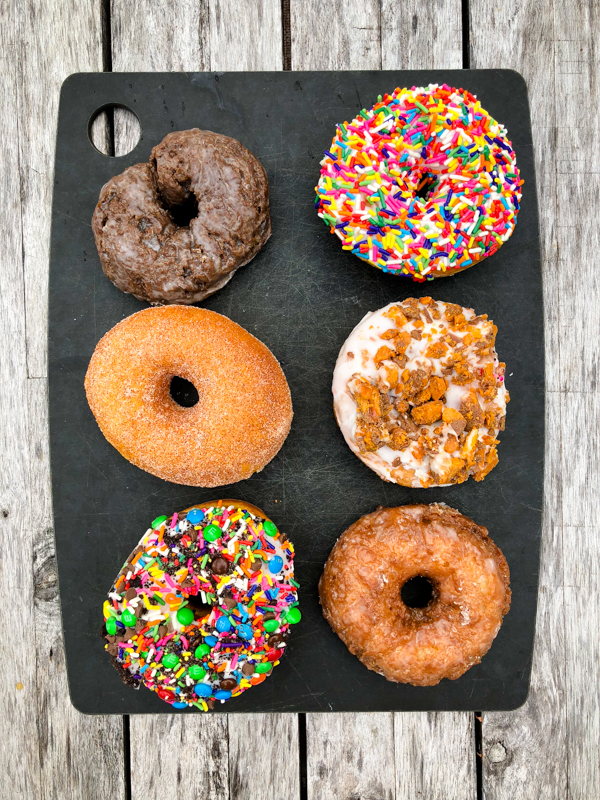 I also had a scrambled egg and a few pear slices to balance out breakfast, which actually kept me full until 2pm!

In the meantime, we went to the Monticello Trail for a kid and dog hike. 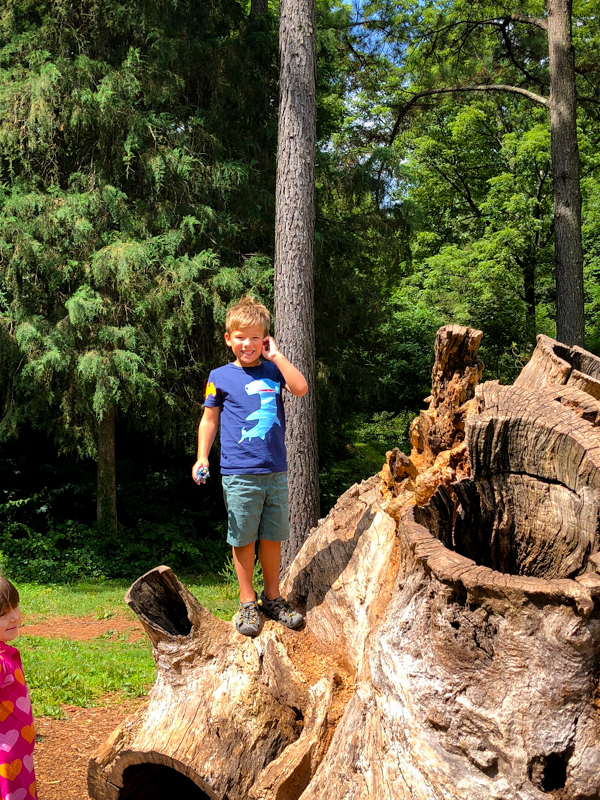 Our friends have a new puppy, Tucker, who was dying to meet Gus! Isn’t he the most handsome puppy? He’s a golden retriever and growing fast. 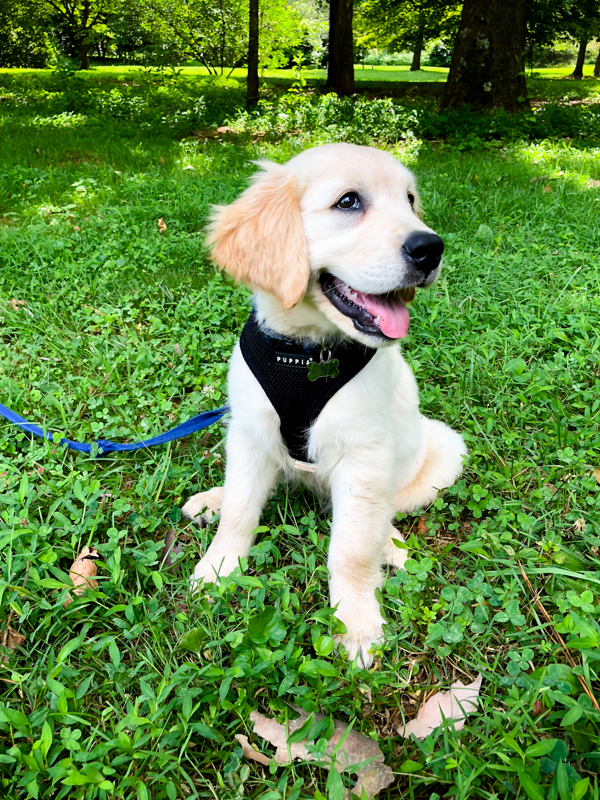 I have to say that Gus played it pretty cool. Teenagers. 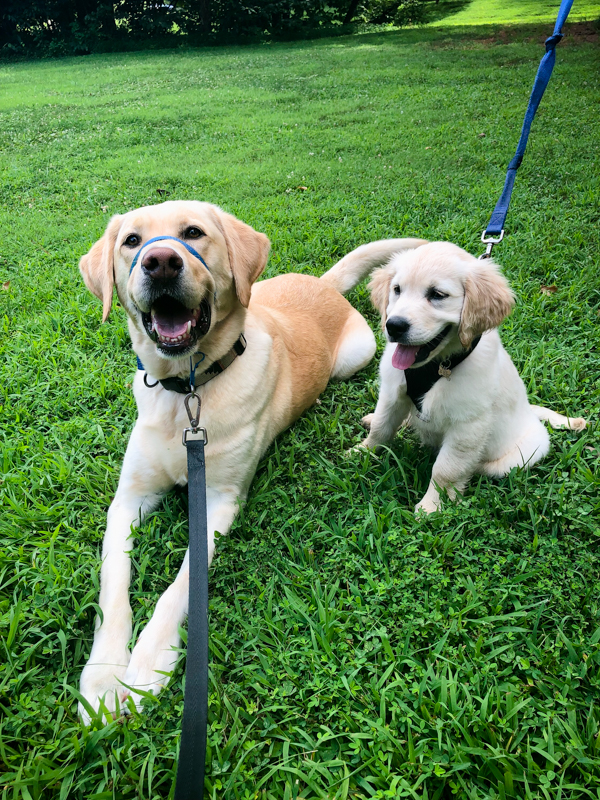 Sarah and I hiked up to the overlook with the three kids. At one point she was pushing close to 150 lbs uphill! These 6-year-olds are smart – they realize how convenient a stroller is for relaxing. If only toddlers would be so agreeable! When Sylvia was a toddler, her mother had to carry her up the hill and push the stroller empty because she hated it so much : ) 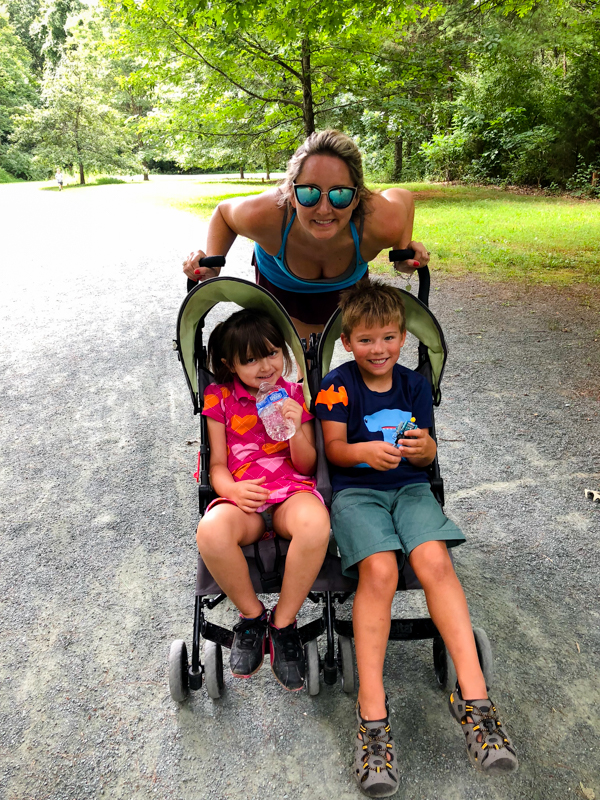 Those donuts really kept me full for hours! For lunch I had a No Bull Burger (minus the bun because we didn’t have any form of bread in the house) with heirloom tomato, pickle, romaine, and dill havarti. 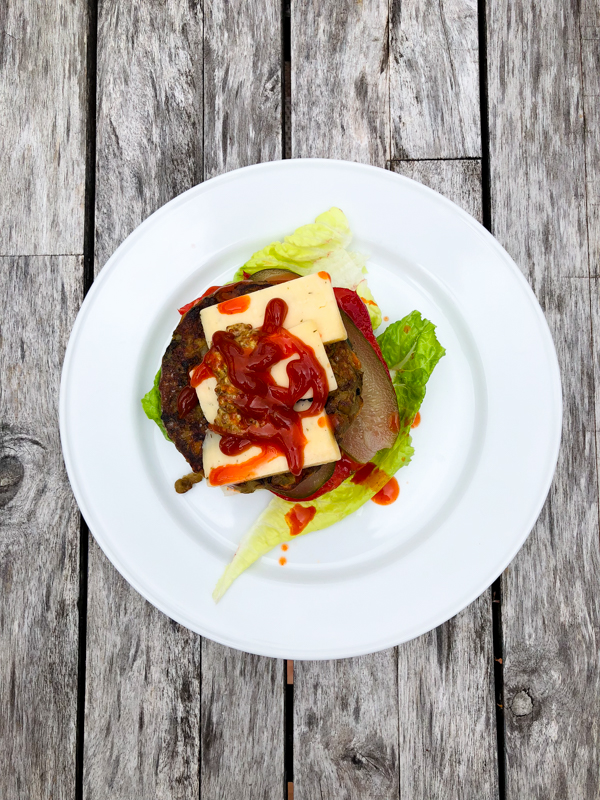 We played some Legos before Mazen went over to Matt’s for the night. 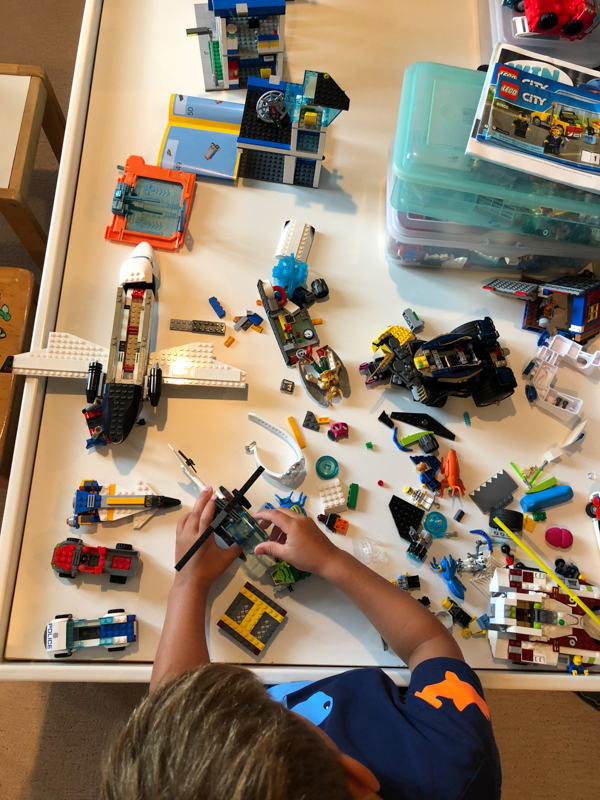 T and I started on some nursery prep. He fixed the ceiling, which had some water damage from a furnace leak. I’m always amazed that he knows how to Mr. Fixit everything! 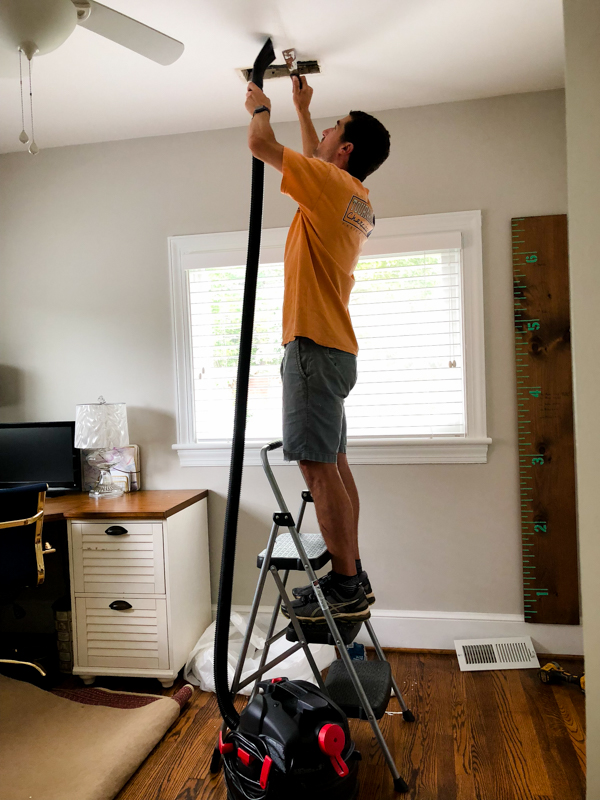 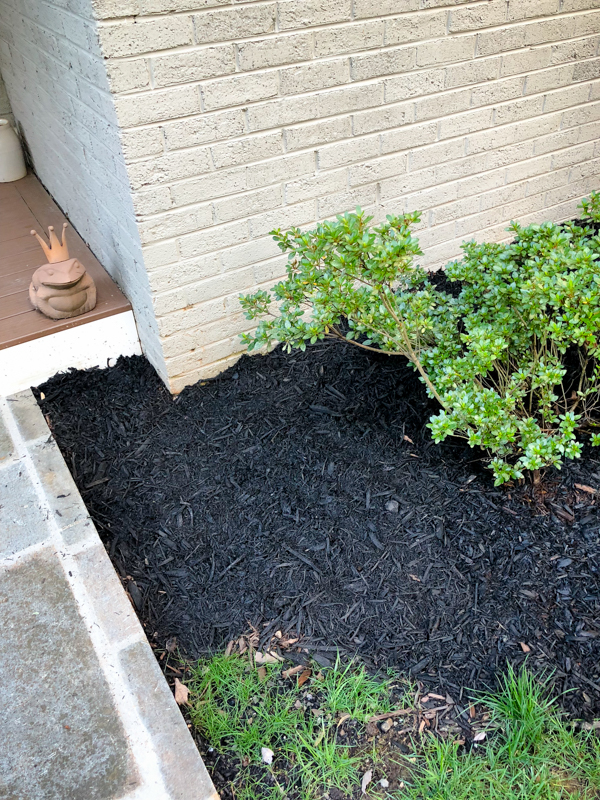 I spent time moving office stuff downstairs and making the left side of the nursery more baby friendly. 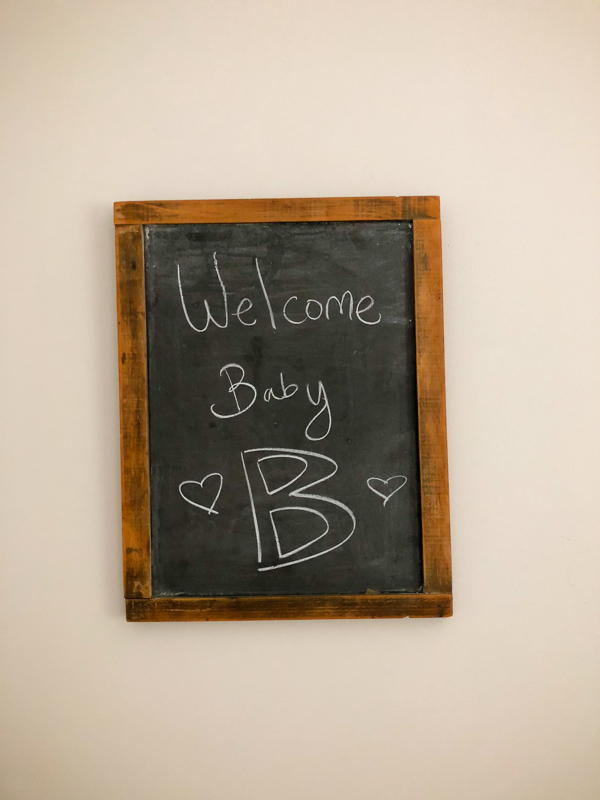 As I’ve mentioned before, Baby B will probably sleep in our room for 6 months (maybe a year?) – we’re not sure. But he won’t be sleeping in the nursery much at all in the first few months since it’s on a different floor as our master bedroom. I do want to go ahead and move the desk out and eventually get the crib and twin bed set up in here, so that’s what we’re working towards. But I don’t feel any pressure to make a Pinterst-perfect nursery at this point. I do think we’ll use the room for diaper changes and storage clothing and gear, so it needs to be 75% ready to go this fall. 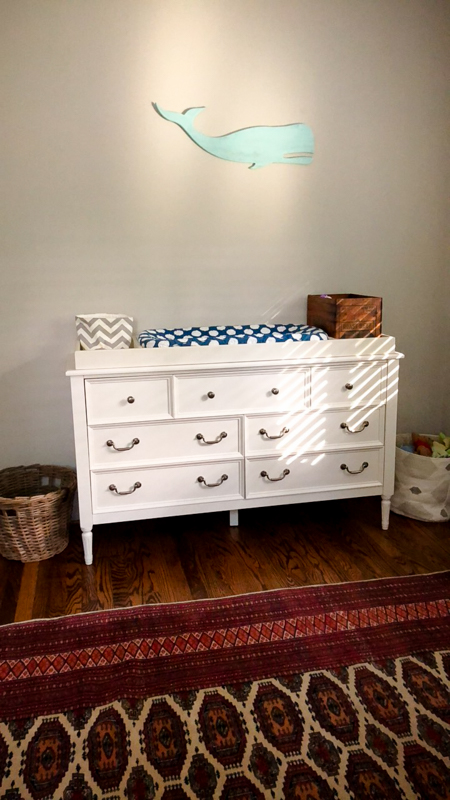 This is the Blythe dresser from Pottery Barn that I bought a few years ago (before life went sideways). I love that it has a removable changing topper so it can be a regular dresser in the years to come. The topper was removed while it was office storage, and I put it back on yesterday! 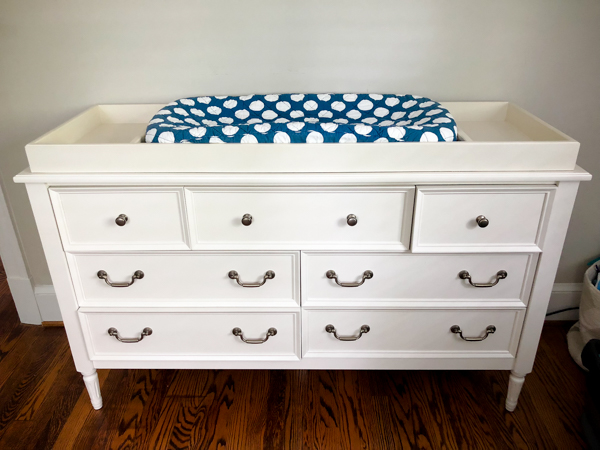 Thomas and I went out on a date for dinner. We were waffling around trying to choose a restaurant and I suddenly realized: we need to cherish these days!! A year from now, we will look back fondly on the days when we were undecided on where to go for dinner on a totally free night! Ahhh! 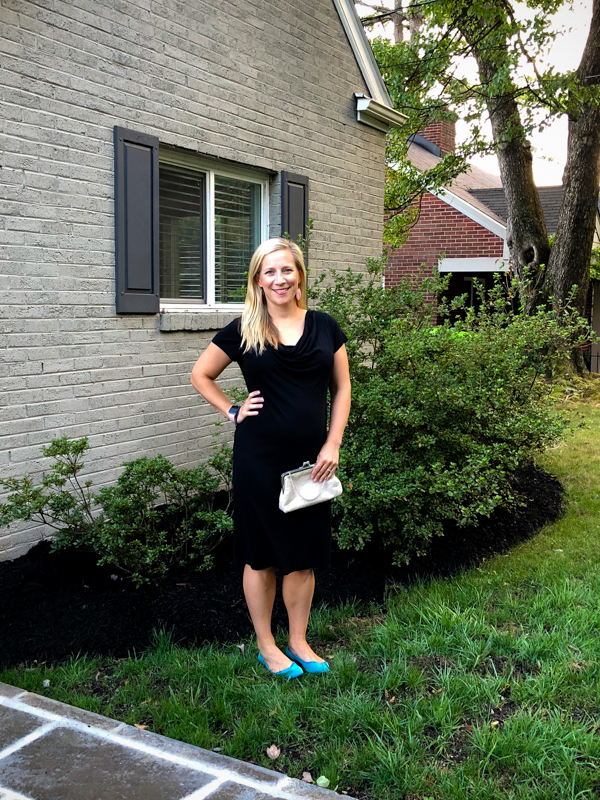 We ended up at Oak Hart Social, which was such a great choice!! Best meal of the summer so far. We sat outside in the cool air and I had the most amazing mocktail! Our server asked me the kind of flavors I like and I said “Tart citrus, maybe some bitters, up.” I never asked what the bartender mixed up, but I think it was a combination of lemon/lime juice with lavender syrup (just a touch) and some fresh strawberry (muddled or puree?!) It tasted like rosé! 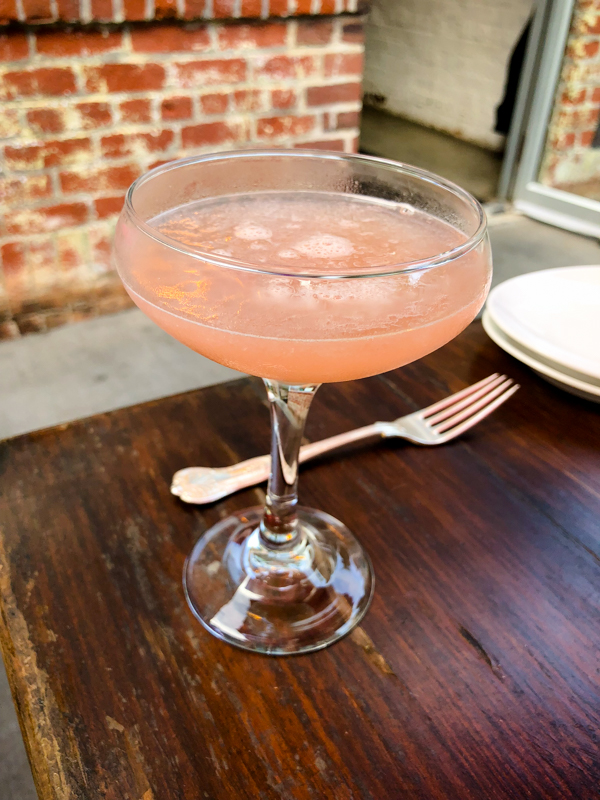 We ordered all three specials on the menu starting with this heirloom tomato and nectarine salad, dotted with blue cheese and a hazelnut crunch. It was epic! 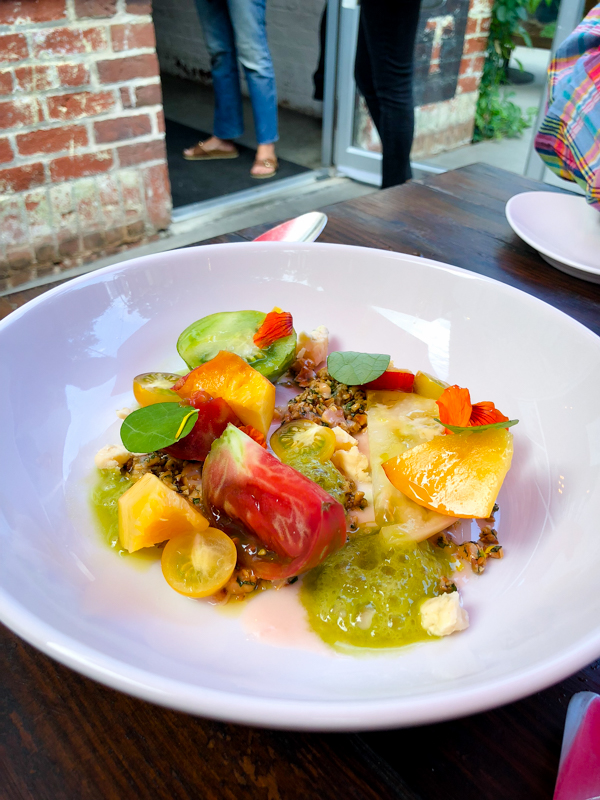 We shared the cornmeal fried catfish with grilled okra, more summer tomatoes, boiled peanuts, fresh corn, a yummy sauce, herbs, and the best part: pickled (?) strawberries!! It was SO GOOD! 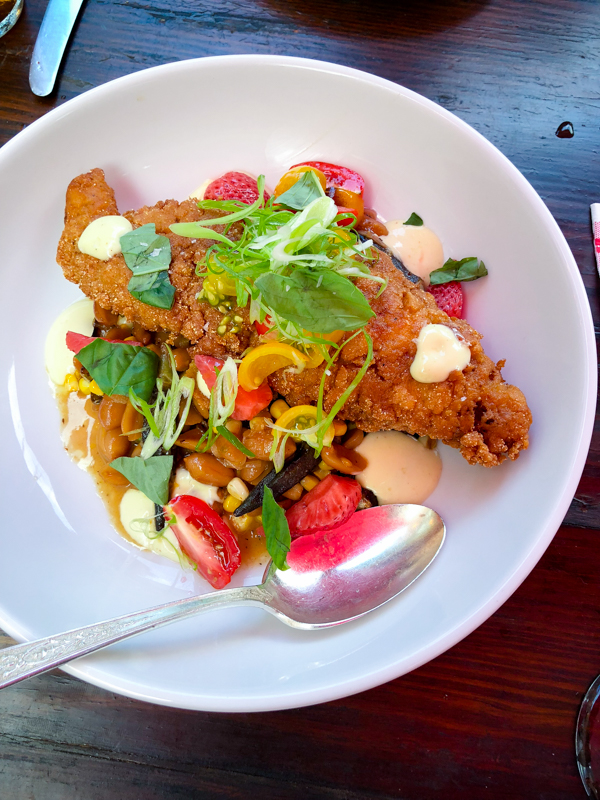 For our third and final course (and kind of T’s entree) we got the special pizza. I don’t even remember what was on this (yellow jalapenos, pork belly, okra?) but it was very good. I could only hold one piece! 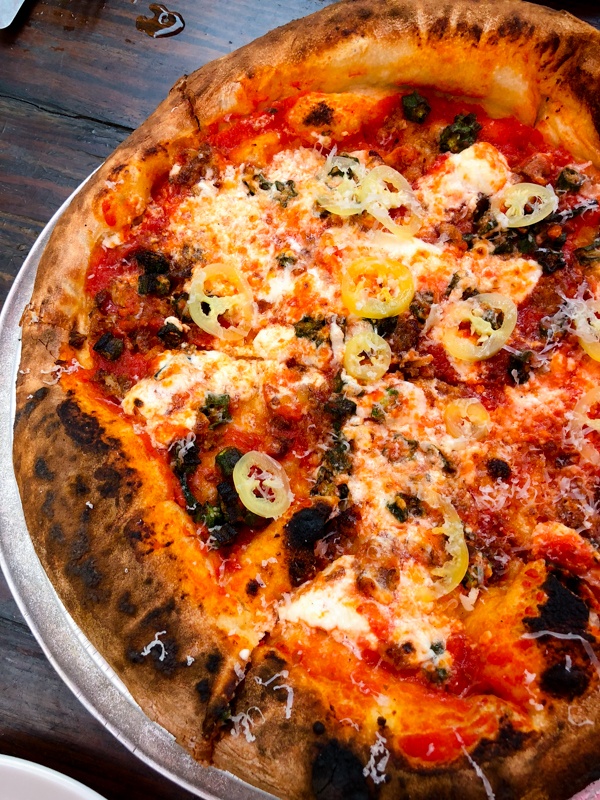 Such a great meal. My favorite kind of menu is when restsaurants take fresh, seasonal ingredients and do really creative and unpected things with them, and this meal was exactly that.

We came home to watch a few episodes of The Crown. I got a little bored with it again, but now it’s picking up the pace. I think we’re on season 2 now.

Sunday was chill: a workout, housework, cloudy skies, and a movie with Mazen!

Hope you guys had a lovely weekend.