(Sadly I cannot translate the accents).

Karen came over for dinner tonight and brought all the fixins for quesadillas. She is auditing a Spanish course at Davidson this semester and is into all things Spanish 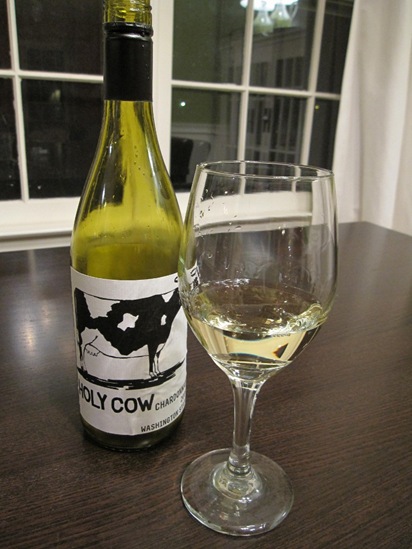 Such a cute label! 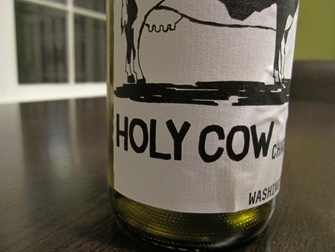 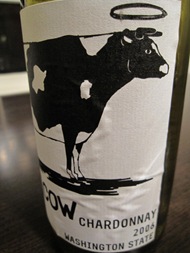 Our quesadillas turned out delicioso – 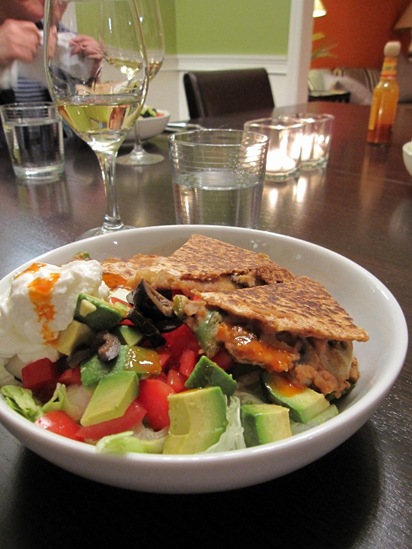 We started with a bed of chopped iceberg lettuce, tomatoes, black olives (not on yet) and avocado. 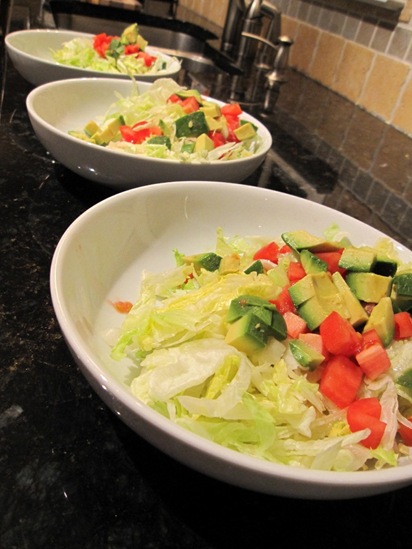 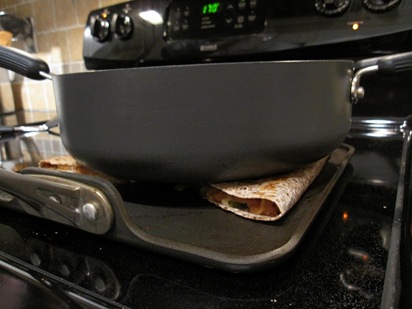 I had 1 tortilla (Ezekiel – it was awesome!) stuffed with sauteed mushrooms and green pepper, about 1/3 cup refried beans and about 1/3 cup shredded Mexican cheese. 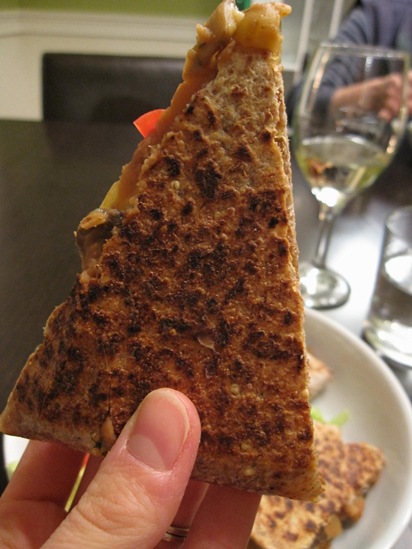 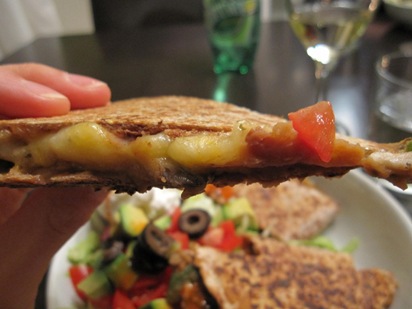 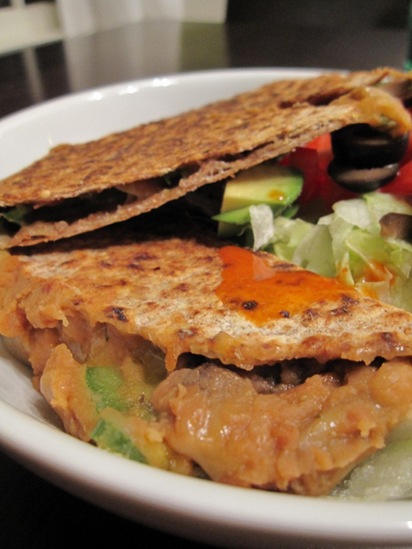 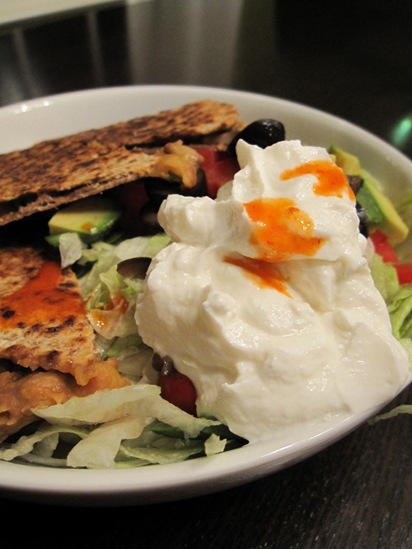 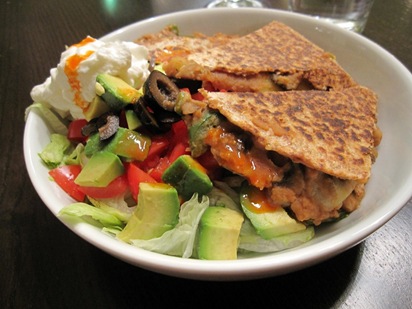 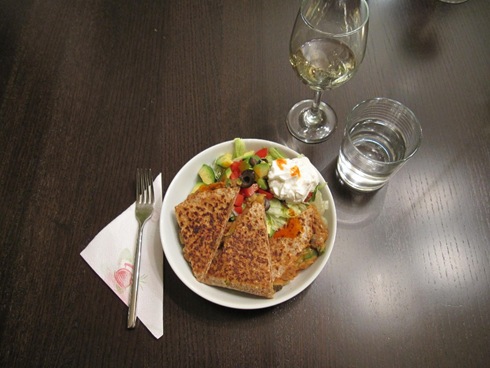 Y para el postre…. we found this chocolate peanut cluster in the freezer. I had one bite, he had the rest. 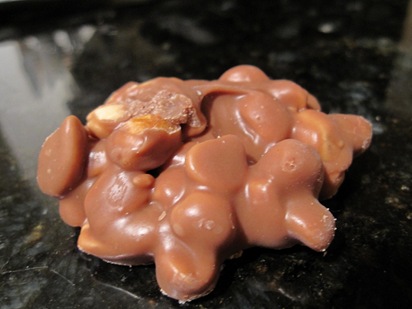 I was hungry today and had a big snack at 3:30. I don’t think my lunch was big enough.  I am hungriest around 5:00 and am trying out a wee smaller lunch and having a snack earlier so as not to spoil my dinner, as I do so often. So instead of starving through 5-6 until dinnertime OR spoiling my dinner with a snack, if I have a smaller lunch I should be hungrier earlier than 5. Sounds complicated!

But today I got carried away because the husband came home with some Cinnamon Raisin bread and while I was planning yogurt with cereal mixed in, I couldn’t pass it up (a new bread to try) so I had both. 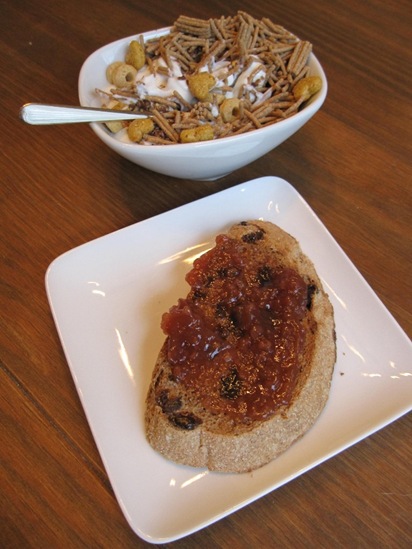 About half a cup of TJ’s greek with some TJ’s fiber worms and H2H. 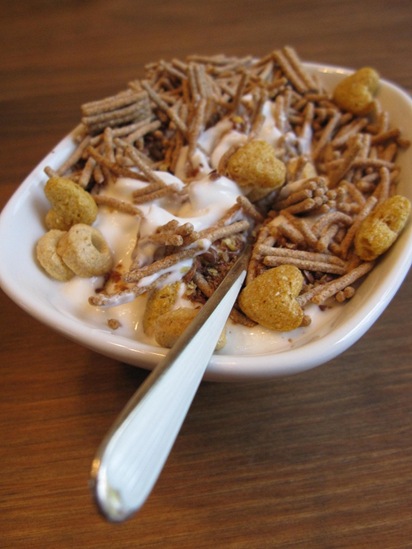 Smothered with a little raspberry jam… 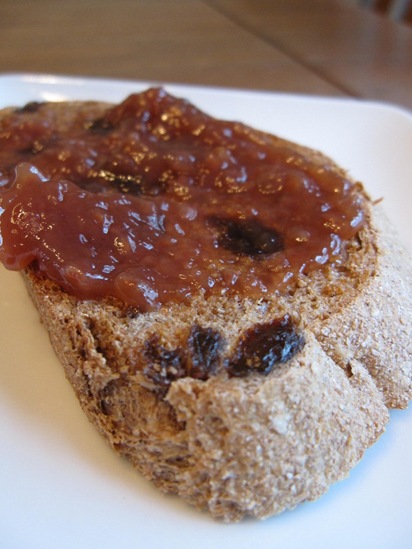 The husband is learning the sweet job at Great Harvest these next few mornings and has to be there an hour earlier – at 3:30!!! He is setting his alarm for 2:55. Yikes! I think I’m going to get in bed early too because I’m planning a 5am gym trip. It can’t hurt to get in bed when he does these days and get some extra sleep – so long as I get up when my alarm goes off!