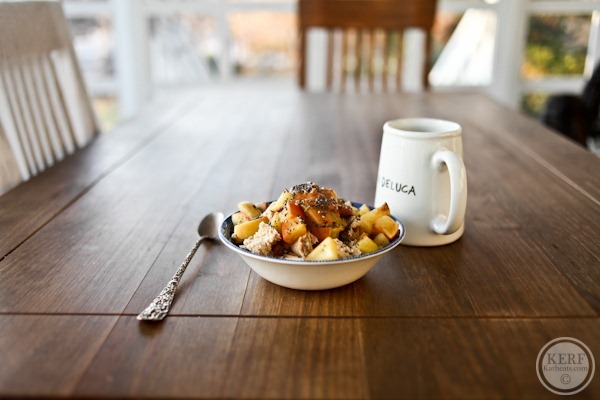 I was on a roll today with interesting combinations – some on purpose and some not! 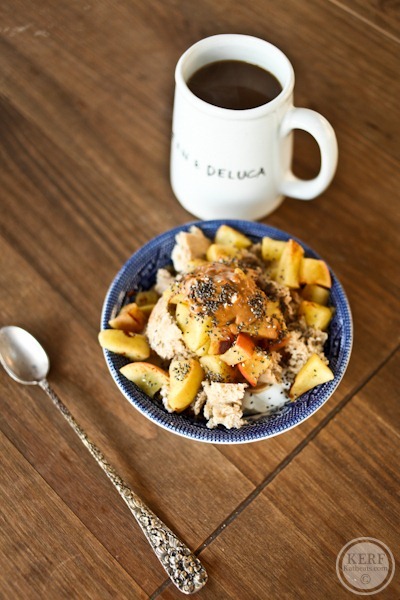 I couldn’t decide what I wanted for breakfast, so I mixed a few things together: Greek yogurt base with Apple Scrapple bread and hot microwaved cinnamon apple on top. The combo of bread and hot apple on the cool yogurt was quite good!! Chia seeds and TJ’s peanut butter rounded out the toppings. 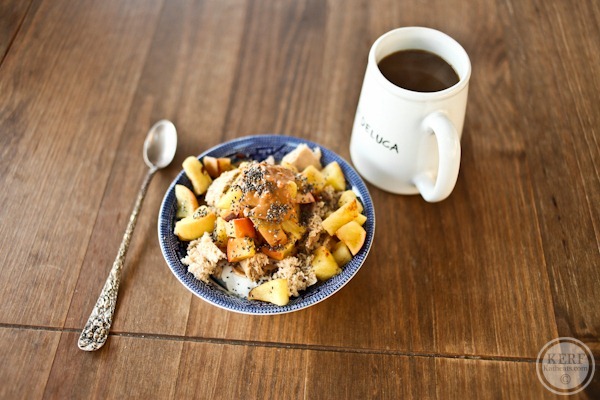 Mazen and I traveled to Trader Joe’s for a weekly grocery trip.

This is what happens when you go to TJ’s sleep deprived and hungry! Some new items literally jumped into my cart without permission! The Raisin Rosemary crisps are soooo good, the crunchy cookie butter awesome (but not as awesome as Biscoff Crunchy(, the roasted coconut chips remind me of this product I tried a while back and loved, and the cinnamon sugar…will be making another appearance. 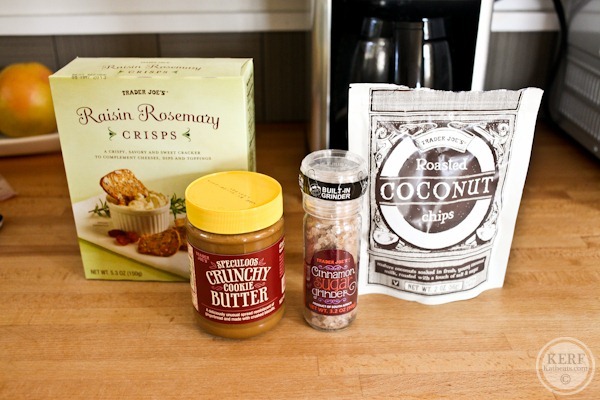 Of course I got more of the Good Guy too : ) 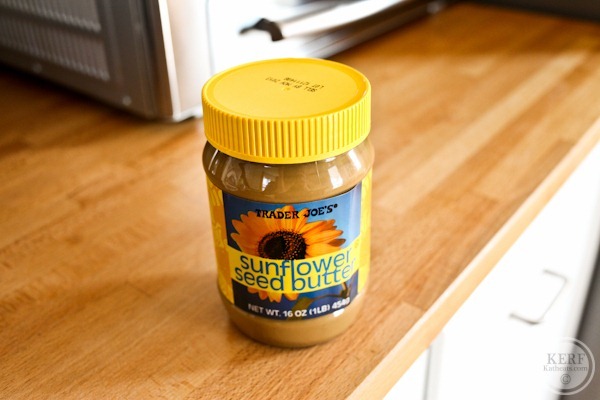 Sooo…I was in the middle of assembling some of the crisps with goat cheese to create some smoked salmon stacks when I decided I wanted to see how the cinnamon sugar grinder worked. I ground it over my plate just so the cinnamon wouldn’t get on the counter and whoops – the LID FELL OFF! All over my lunch!

The good news is that cinnamon and sugar go wonderfully with goat cheese, so I dumped the majority back into the container and then ate cinnamon sugar-dusted goat cheese crackers for lunch! 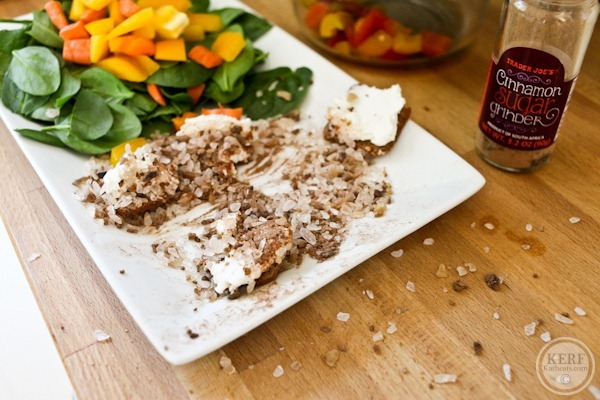 Then I moved my salad to a clean plate and put together a super healthy mix to balance out the sweet crystals – greens, olive oil, veggies, salmon, more goat cheese + capers. 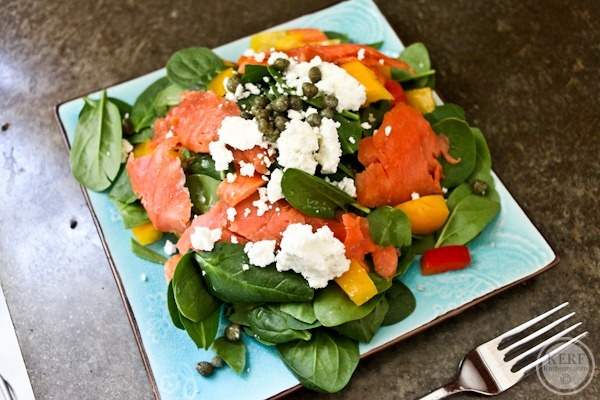 Clems for a snack! 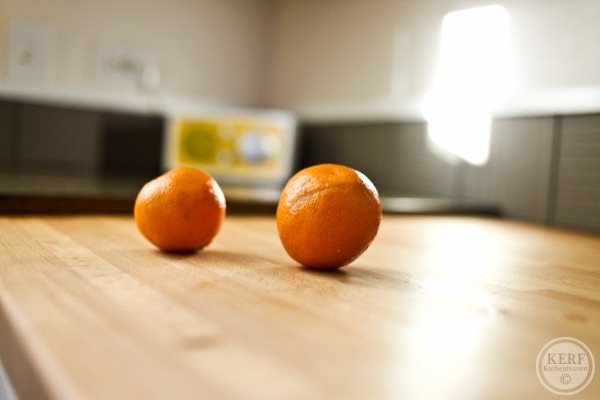 Karen came over today and played with Maze while I went to the gym for a quick visit. I did a quick set of weights and 20 minutes on the stairmaster and biked home as fast as I could. Luckily all was calm! 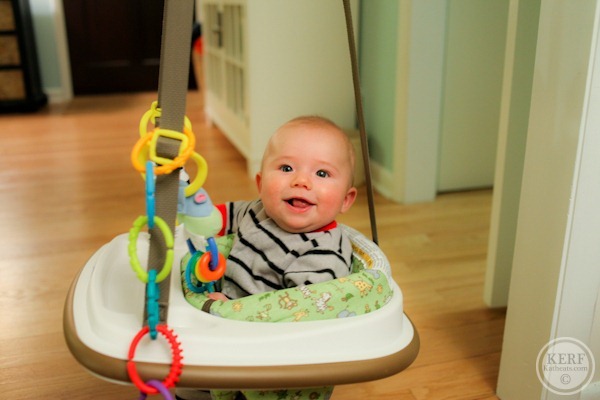 Tonight’s dinner was awesome and just one of those “let’s put this in that” meals. 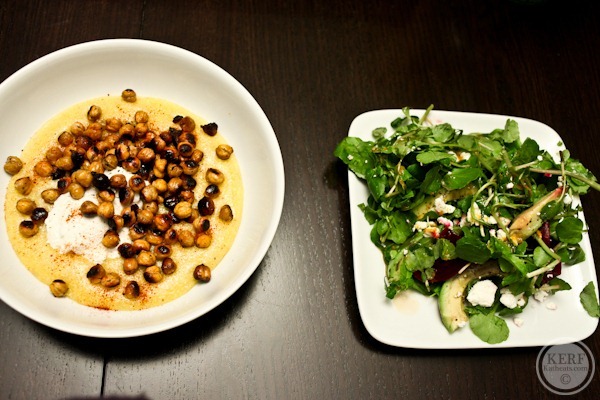 We had a fun bag of grits from local Wade’s Mill that Edible Blue Ridge gave us for the holidays. 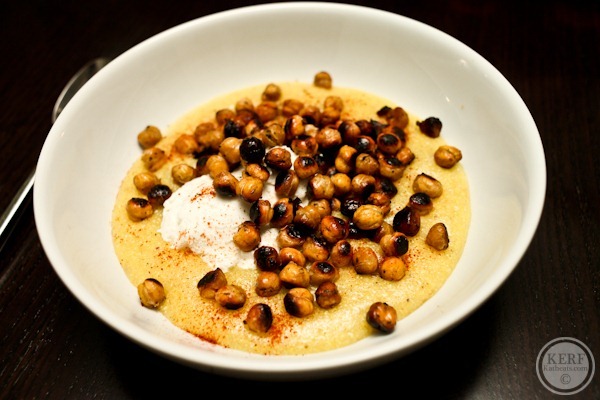 We cooked the grits per the package – they were thick and chunky just how I like ‘em! That big blob of white – more goat cheese!! On top are lemon-dill roasted chickpeas. The beans were drained and rinsed, tossed in a dressing of equal parts lemon juice and olive oil plus a splash of honey and a pinch each of salt and pepper. About a tablespoon of dried dill on top. After a quick marinade, we strained out the dressing so they were close to being dry and roasted them at 400* for 30 minutes, stirring halfway through. Then the dressing was added back after – just for more flavor.

This dish was strange, but so good!! 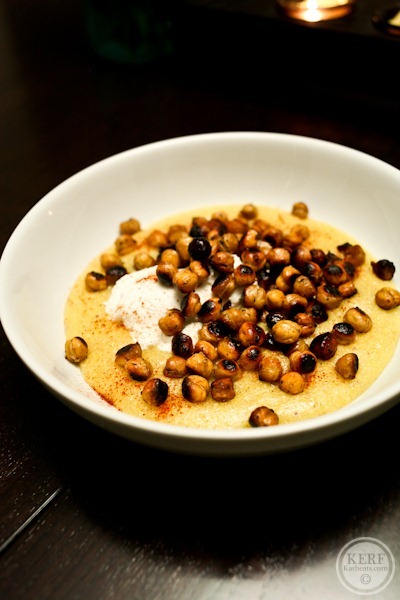 On the side – Karen brought us a lovely watercress, beet, avocado and you-guessed-it: goat cheese salad with an orangey dressing. So crunchy good! 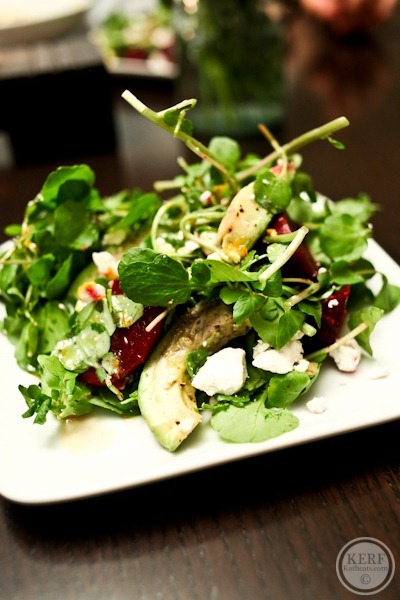 Why all the goat cheese? We made some homemade!! I actually wasn’t around to blog about it when Matt and Karen did the process, but I think we’ll definitely do it again and I’ll be sure to share. It’s quite good!! 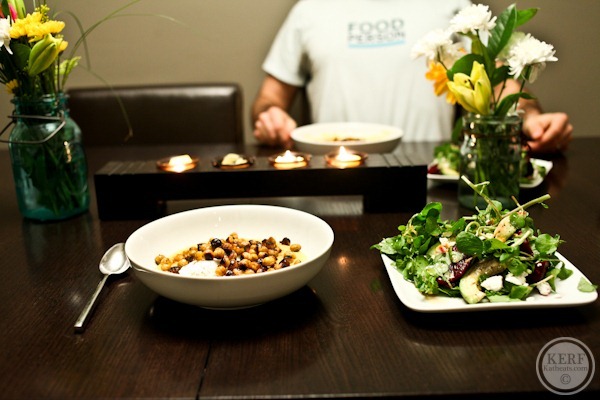 And lastly – our little entertainer!! He LOVES his bouncy seat that Santa brought from Amazon and is just now making the connection between kicking his little feet and making him bounce. It’s SO cute to watch! 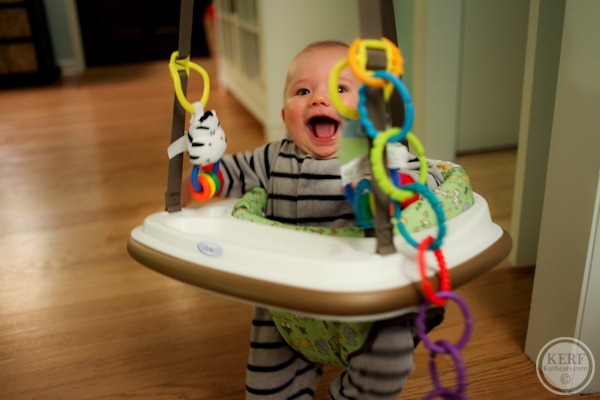