You are here: Home / Real Meals / The Ups and Downs of Back-To-School Week 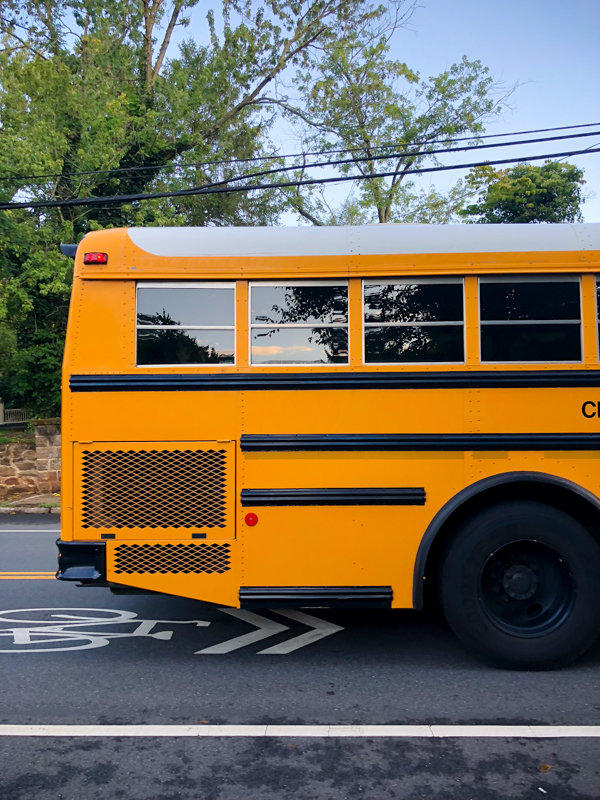 We survived the first day of school! Before it started, I was so worried about getting up early and the morning rush to be on time. But what I didn’t realize until the first day was that, as of 7:15 am, I am by myself to face the day head on. We loved our leisure mornings when preschool didn’t start until 9, but it sure is efficient to be solo so early now. (That is until my life does a 180 in October!!!) I’m using this time as efficiently as I can for now. One of my big goals is to do some dinner prep during the daytime, and I haven’t decided yet if I’d rather do that in the 8:00 hour or after lunch. I’m thinking after lunch when my kitchen is already messy from lunch making. Hmm…

Zooming back to earlier this week, Grammie and Pea went with us to Mazen’s open house on Monday. He’s been on-and-off nervous about the new school and we had some “I don’t want to go” moments before every school-related event, but once he’s there he’s totally fine. 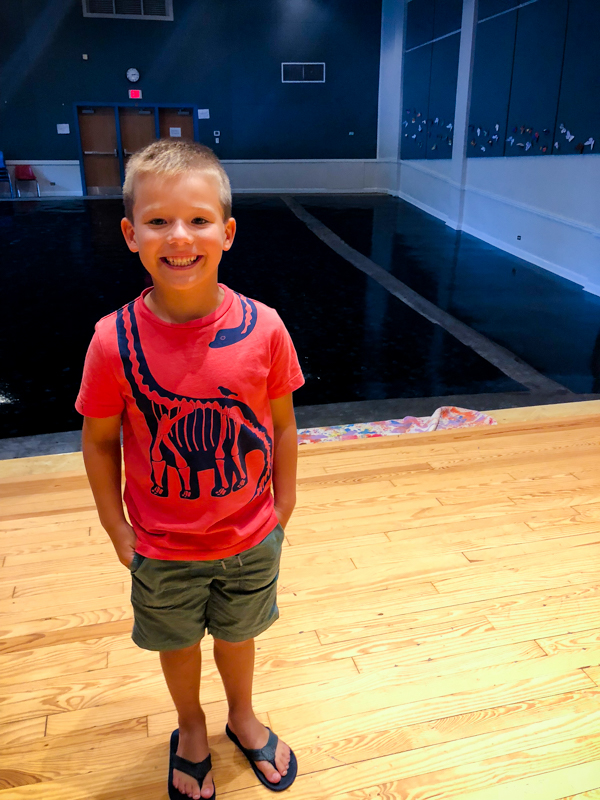 Playground time at the end was a hit. He is so strong he can climb the fire poles straight up! 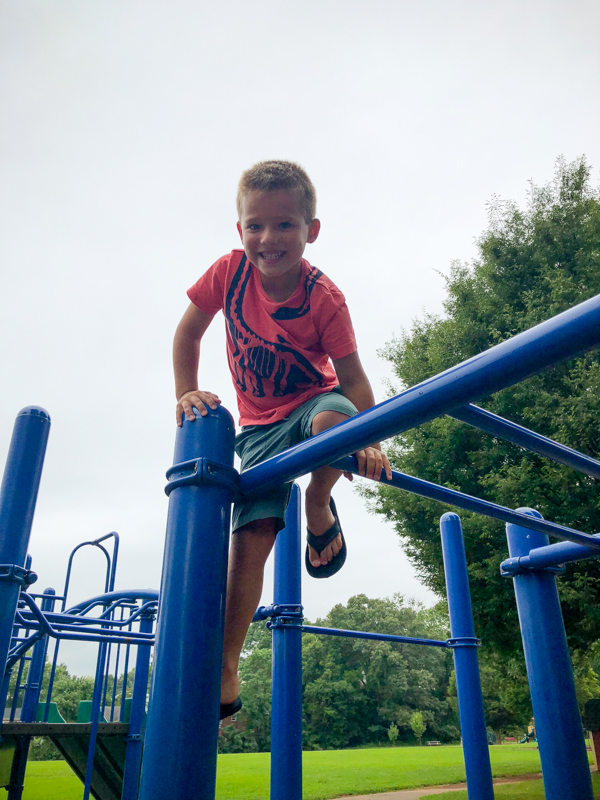 My mom was pleased to find a copy of her book in the school library! 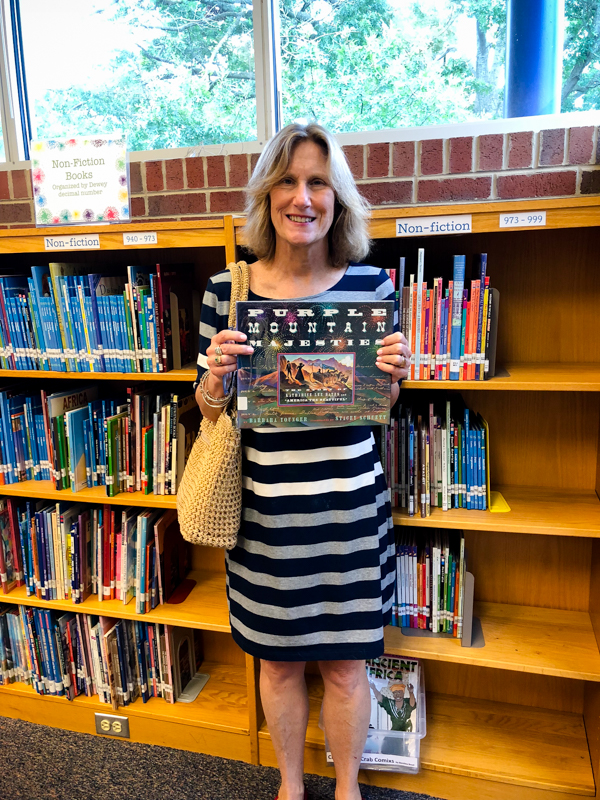 At home, we were hanging in the basement when I saw something black on the baseboard. 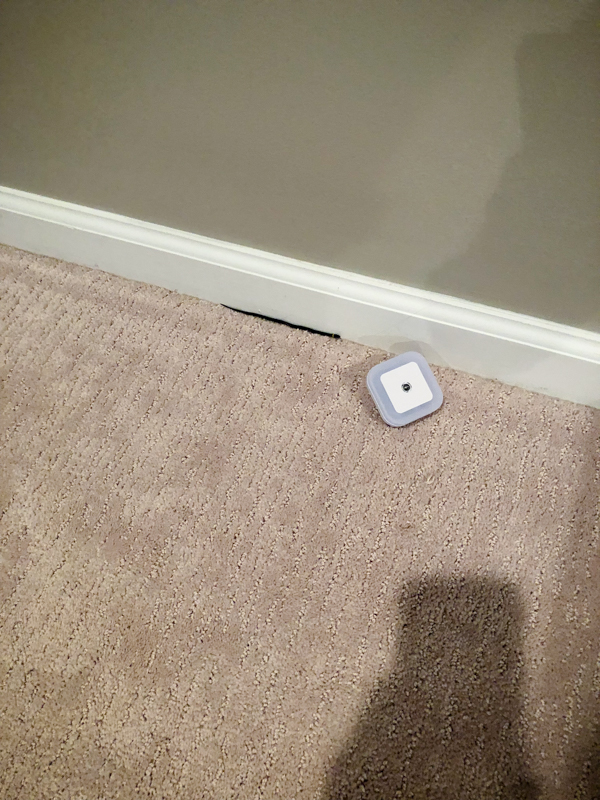 Turns out it was a tiny SNAKE!!!!! Despite the fact that it was only about five inches long, its movements sent chills through my spine. Mom was brave enough to catch it in a mason jar (even when it coiled up to try to strike her!) and dad released it at the back of the yard. I was freaking out the whole time and spent the next few days looking for more (don’t baby snakes live in nests?!) I imagine he crawled in some hole or crack, but I sure hope there are not more. Dad said it was a yellow ring-neck and was not poisonous. Either way, I’m glad I was not home alone when it was spotted! 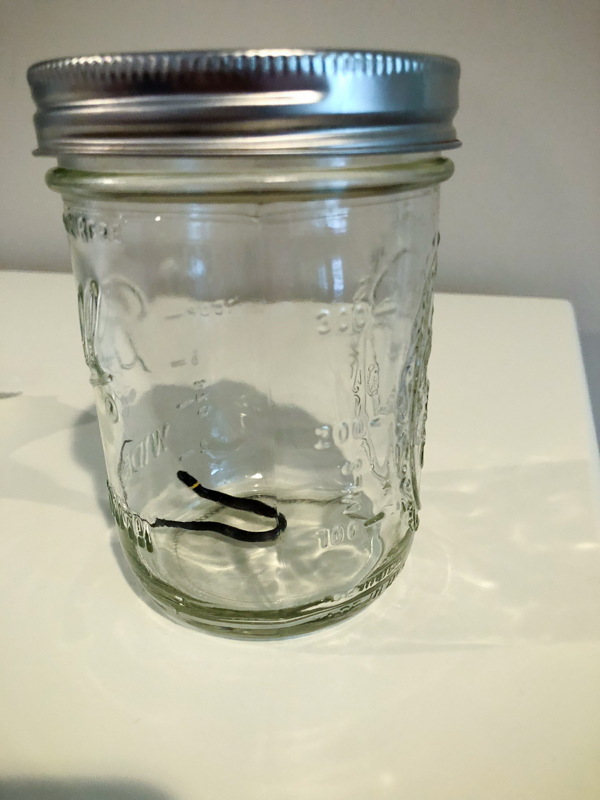 On a more positive note, I’ve been loving garden heirloom tomato + cheddar sandwiches. This one also had avocado and pickles! I had this two days in a row along with the Garden of Eatin’ Lime chips, which are fantastic, and red pepper strips. 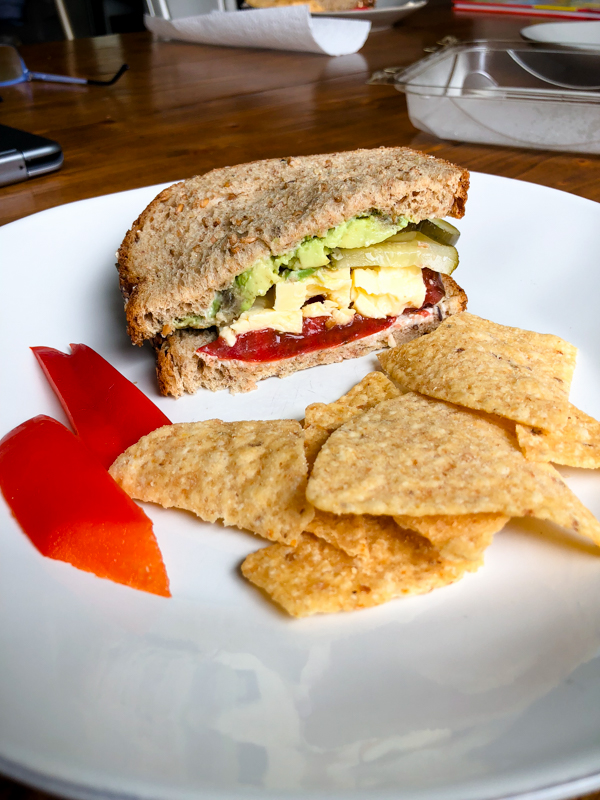 Matt took Mazen shoe shopping and came home with these awesome light-up Sketchers. (Don’t worry – they only light up when manually pressed so they are not a distraction unless activated by a human.) Con: They have laces. So add shoe-lace tying to our “things to learn” list! 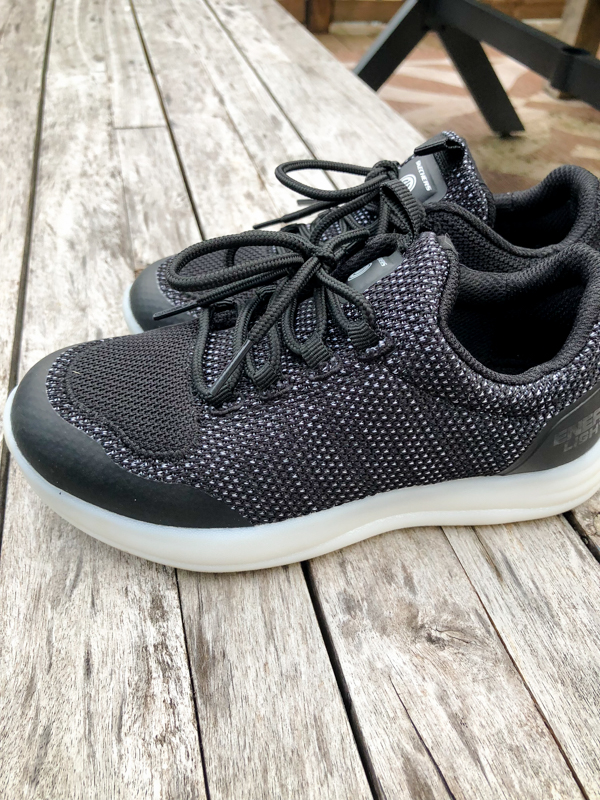 We had a great B2S block party with our neighbors on Monday night. Pizza, salad, watermelon and a whole lotta kids running around! That’s the lemon, currant, arugula pizza from Whole Foods. It’s the best! 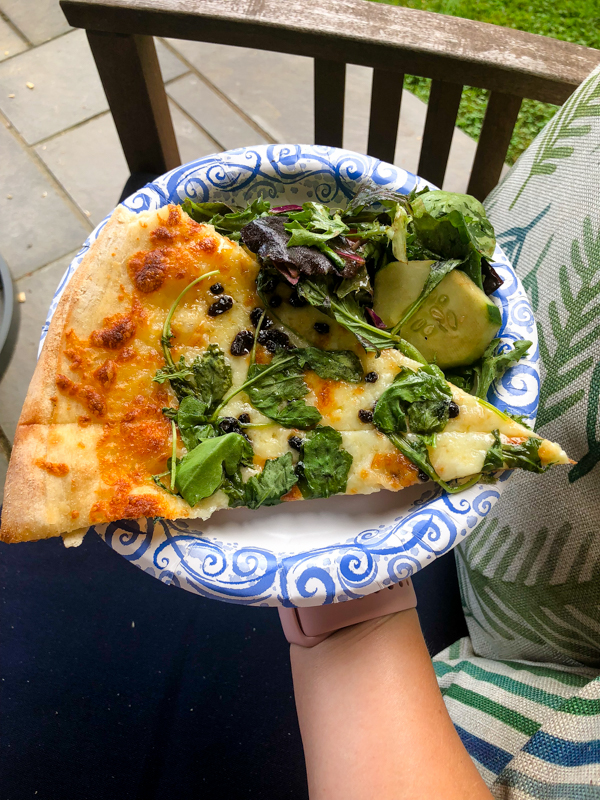 The day before school started, I went on a crazy organization bender. I think a combination of the chaos of summer, the yearn for school routine, Mazen’s upcoming birthday, and my nesting instinct created the perfect storm in my brain. I didn’t sit down for 10 hours! (And as a result, my pregnant back ached for two days 🙁 ) 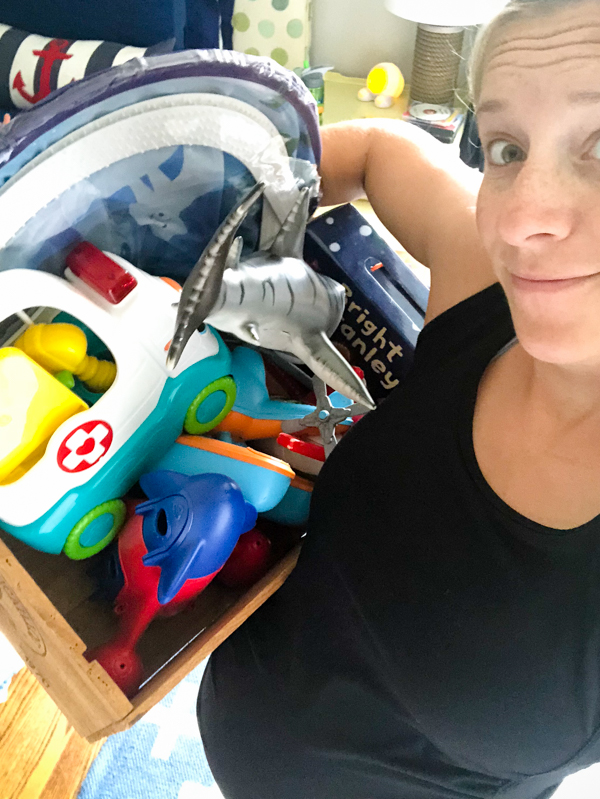 I did a massive toy overhaul and cleaned out Mazen’s closet. Look at all that white space! (I also cleaned out my closet and several other problem areas in the house.) 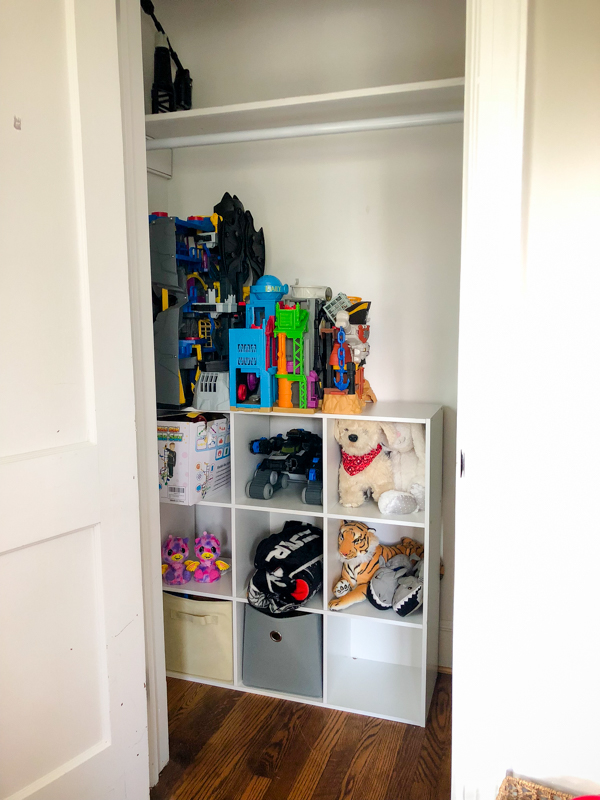 I am pretty good at knowing what he will notice has been relocated and what he will not, because I see what he plays with on a daily basis, but I generally tuck the toys away for a week to see if he asks for anything. Worst-case scenario: We can buy it again! 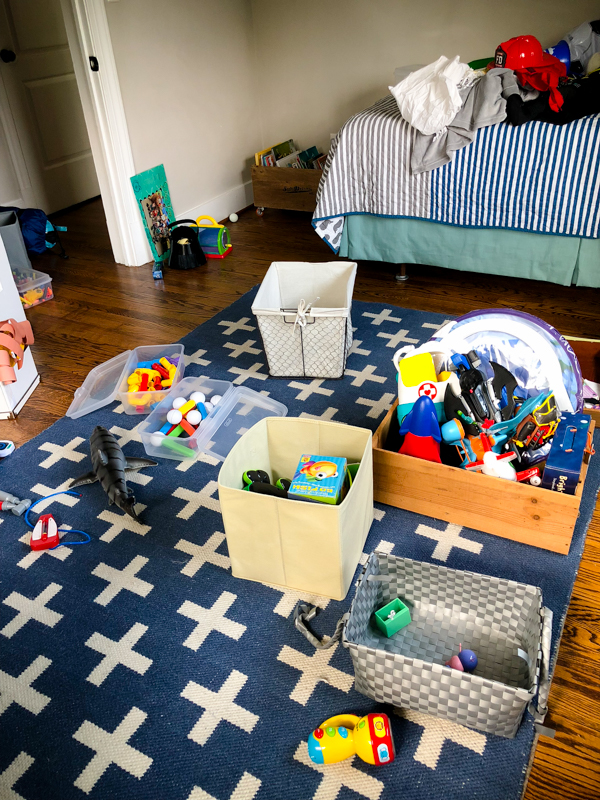 We have read every book in our house at least once and there were SO MANY! Hundreds! If any are missed, we will go to the library : ) 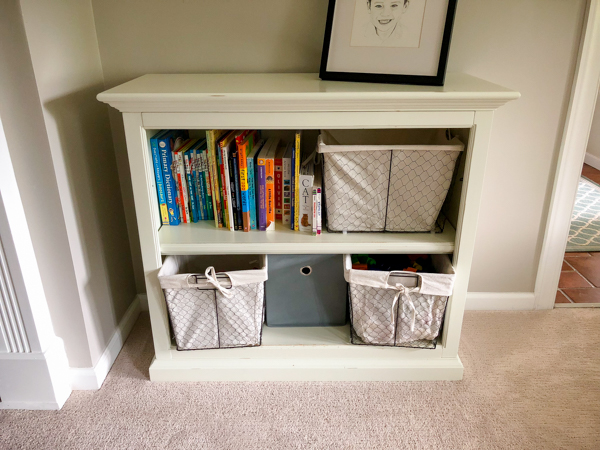 And Christmas books were tucked into our Christmas storage in the attic. 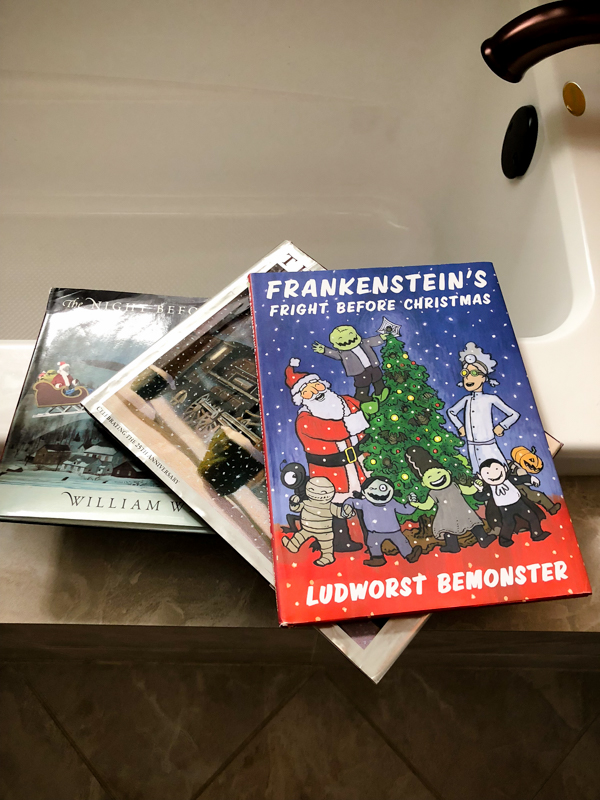 I found several back to school books that were perfect for reading at bedtime all week. 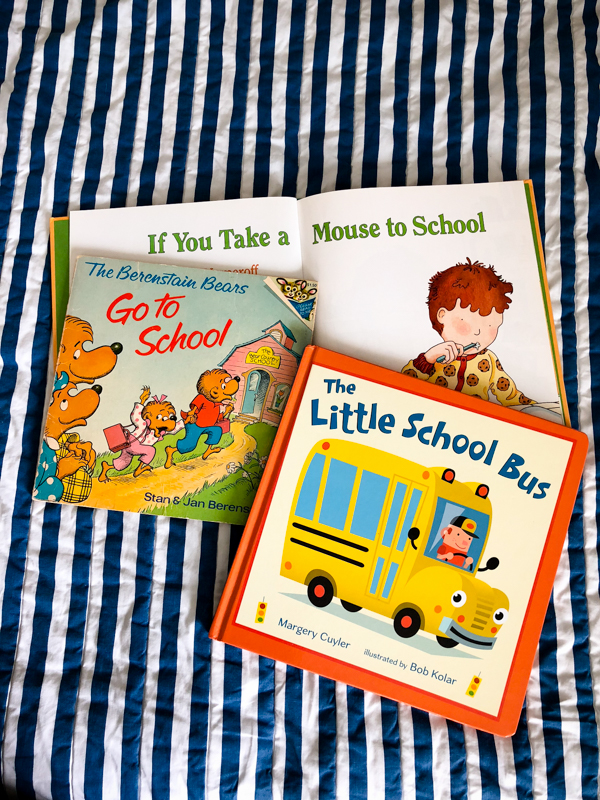 Legos were sorted too! (Pieces and instructions are in bins stored under the train table) 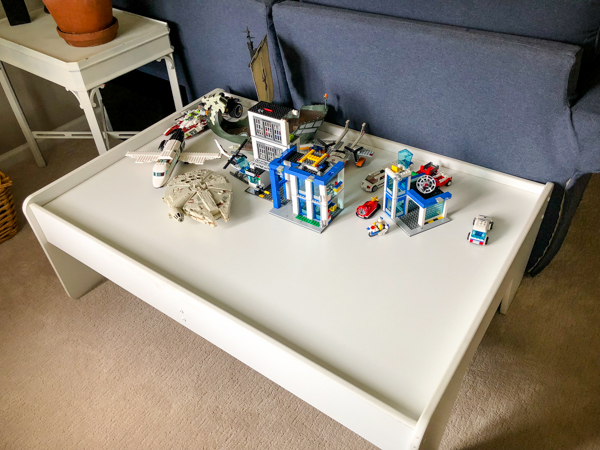 Found at the back of Mazen’s closet 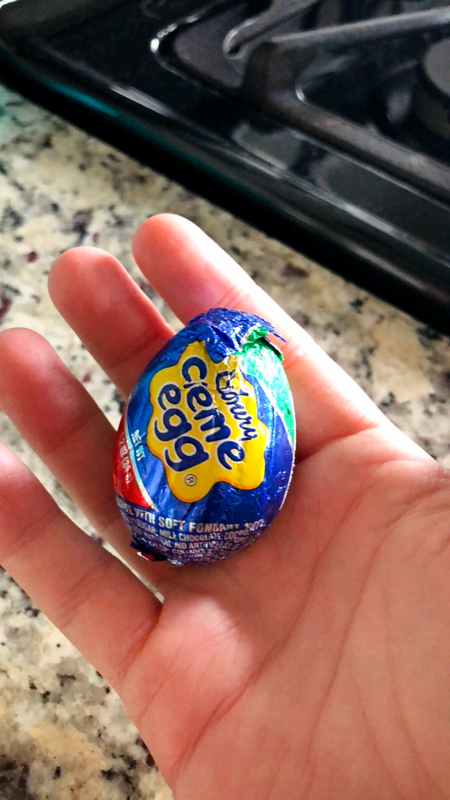 By the end of my organization day I had walked 5 miles inside my house – ha! 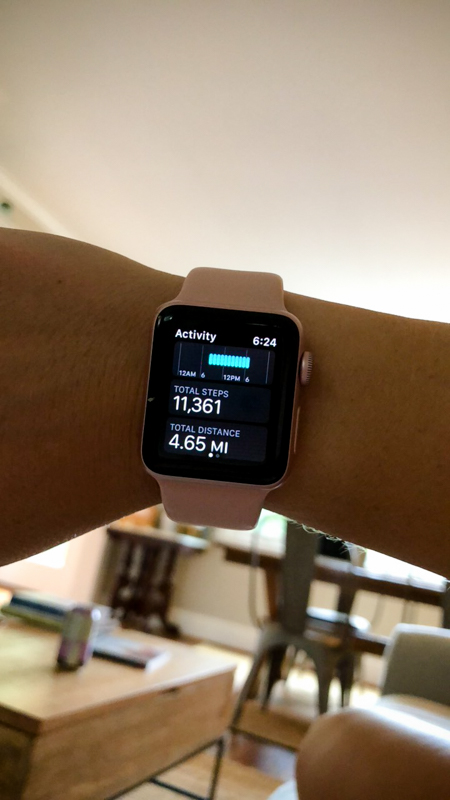 The night before the first day I made chicken, cheese, and arugula quesadillas and cornmeal baked okra. 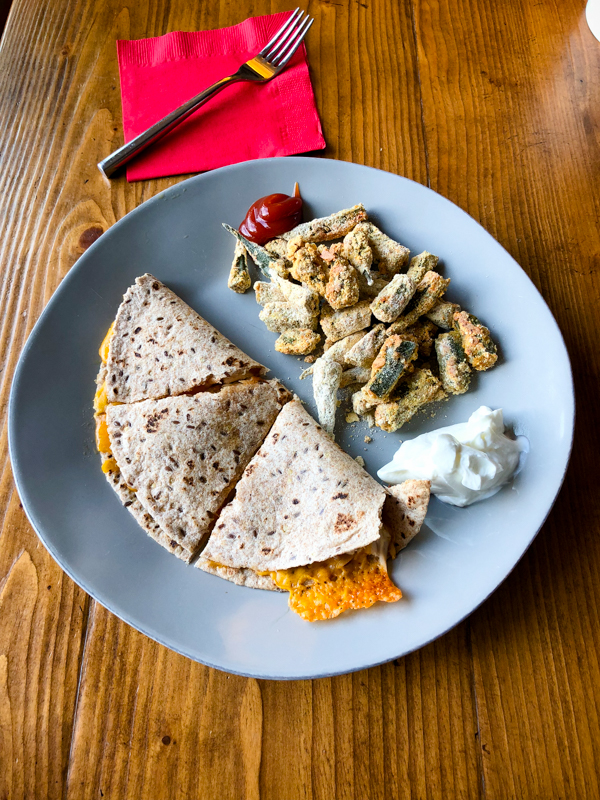 Getting up around 6:15 wasn’t too hard, actually. Thomas is up in the 5:00 hour so he’s been great to help get Mazen up while I get up and get dressed. M didn’t want much breakfast on the first day and was quite nervous until our awesome neighbors (who are going into third and first grades along with their kindergarten sister) came over to get Mazen. He instantly perked up, thank goodness. I do not know what we would have done without them! 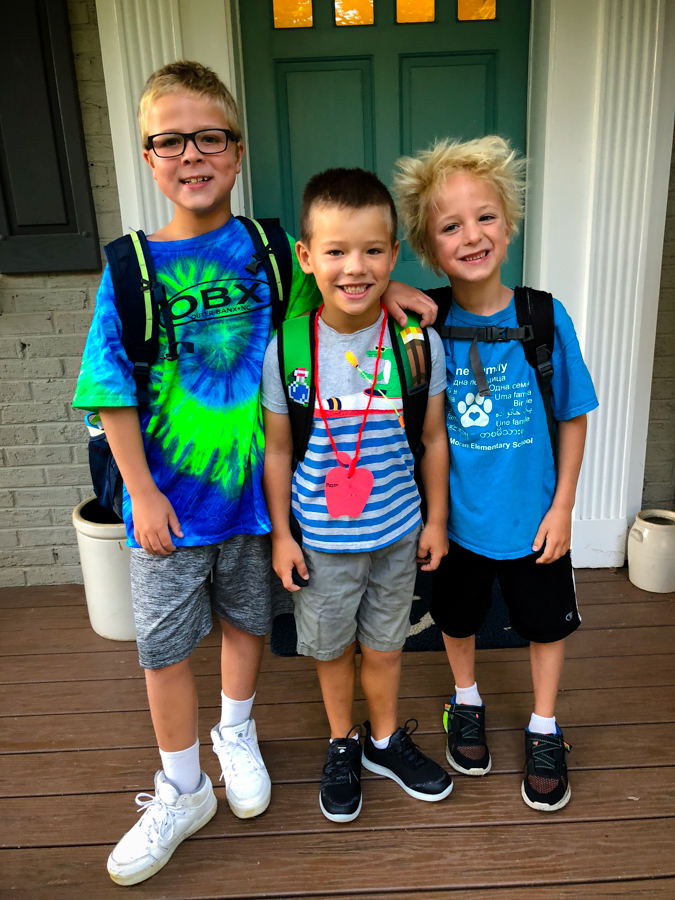 The bus stop was filled with excitement and the kids were full of energy. We met two other families there, so it’s quite the bunch of kiddos! When the bus finally arrived, the boys raced on and Mazen didn’t even say goodbye! I got a little glimpse of a wave through the tinted windows. It was sort of sad when the bus pulled away, and I wondered how he was doing all day. The day went great though! He has an awesome teacher and several friends in his class. 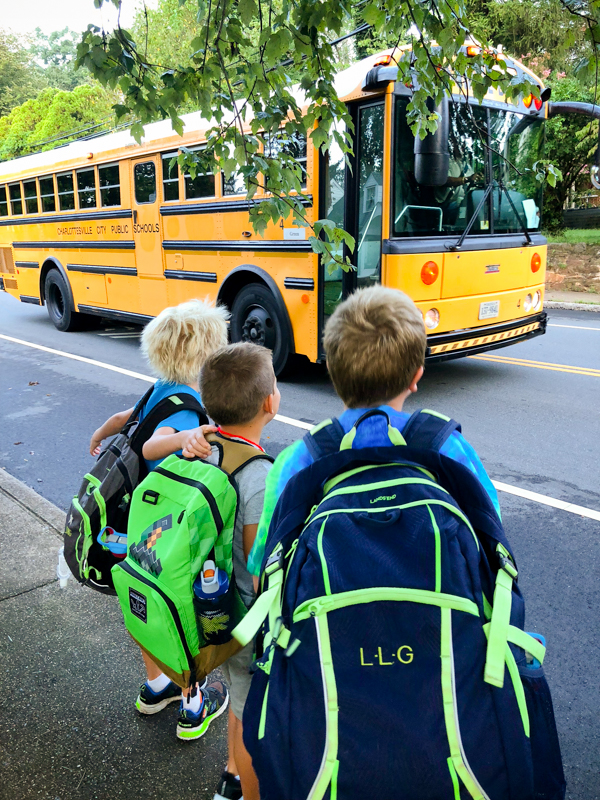 I couldn’t resist doing a school-by-year collage – look at how he’s grown up! 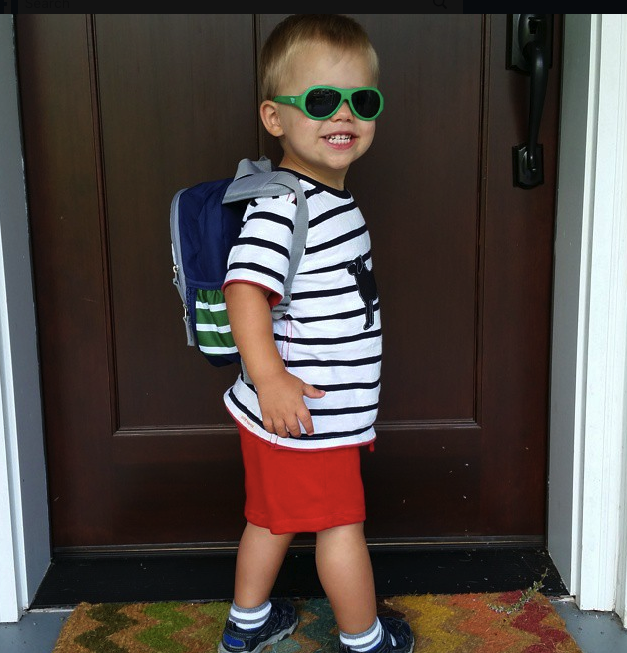 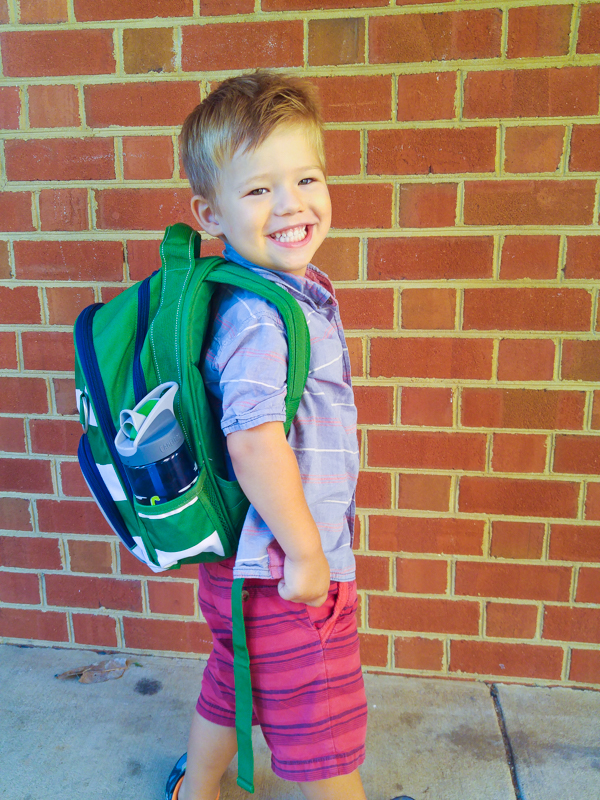 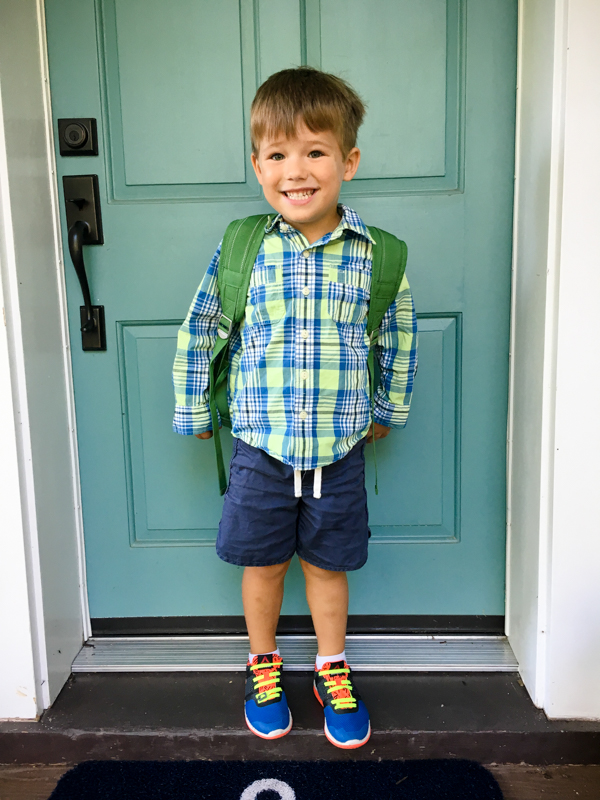 Transitional K (about to turn 5) 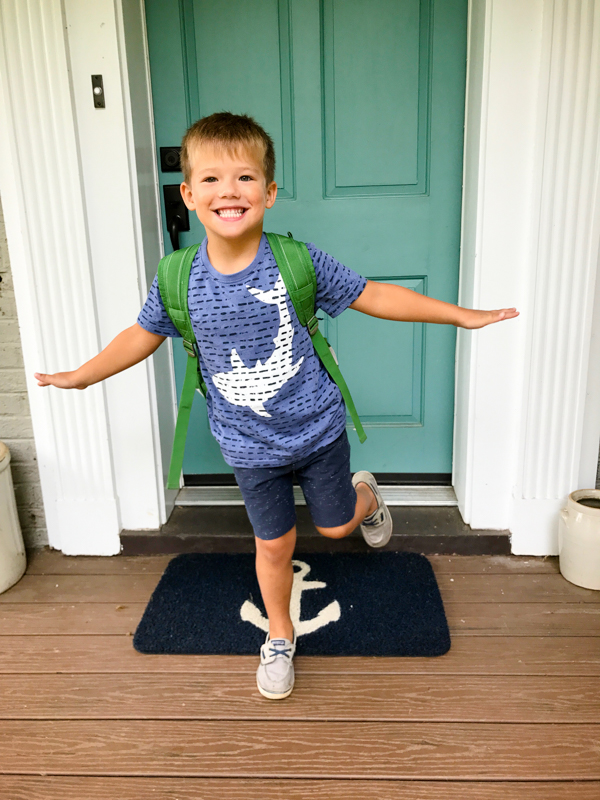 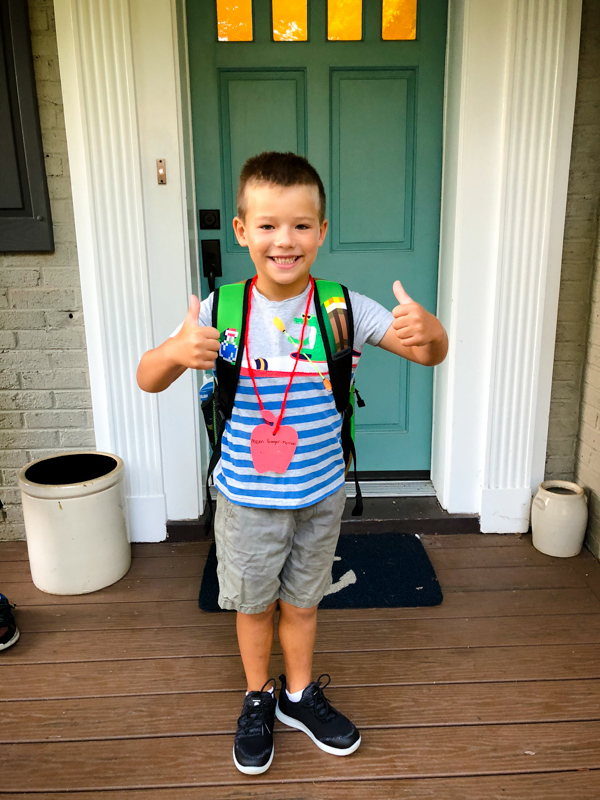