You are here: Home / Lifestyle / That’s What He Said

The Tailgate Farmer’s Market was fun! 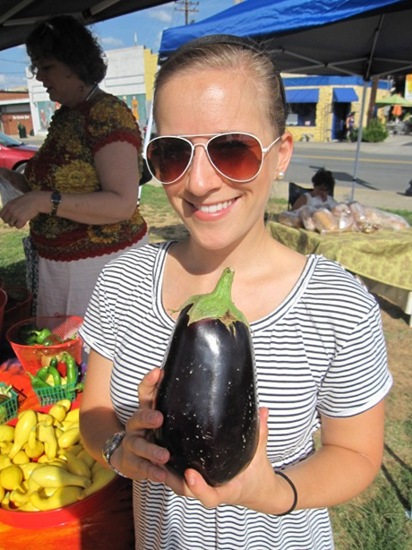 Since I’ve been gone so many Saturdays, I really haven’t had a chance to check out Charlotte’s markets this summer. But I always forget that there are a handful of them open on Tuesdays. Our Regional Farmer’s Market has parts that are local, but it also has California lettuce and Mexican product. Not exactly local. But the Tailgate is local, and a lot of the produce organic. The trade is the selection is pretty small. I didn’t see ANY fruit! 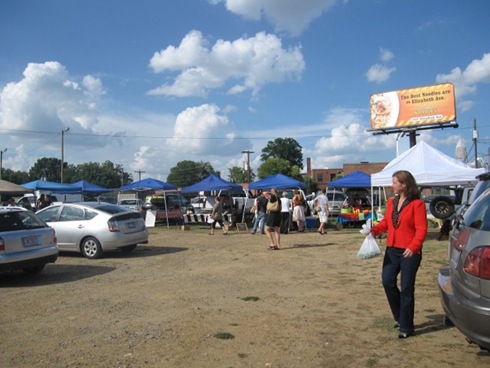 The veggies were gorgeous thought! 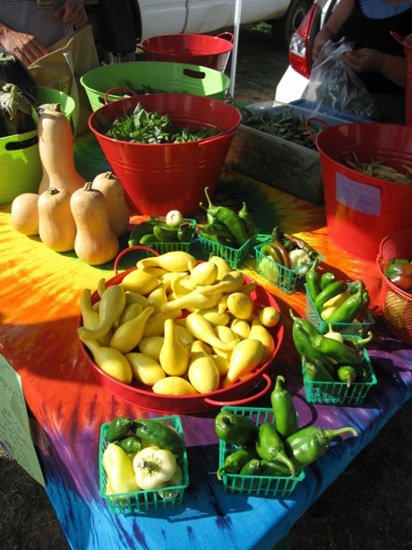 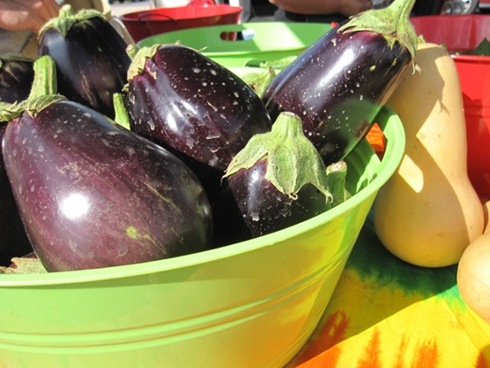 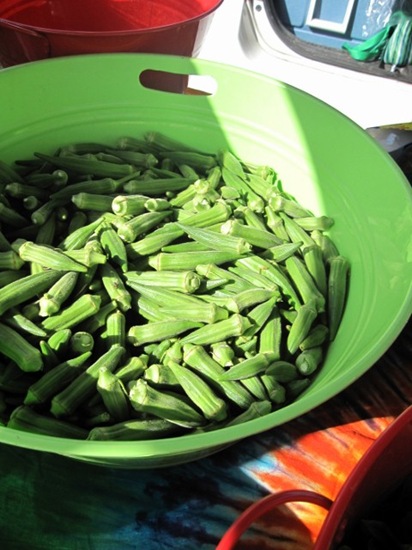 And I was thrilled to find a rather large selection of local meats from at least 3 different vendors. Here was one – 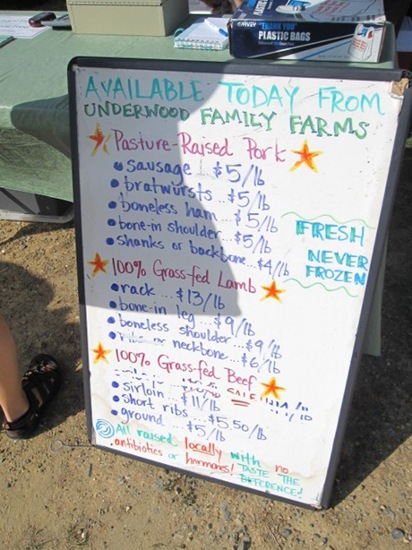 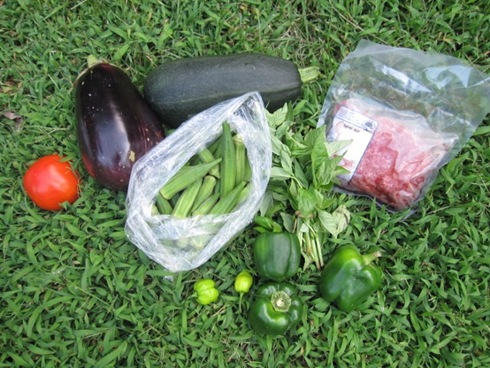 When it was dinnertime, Matt go to work and I spent the time reading blog posts from the Summit. Thanks for all the kind words and great photos guys!

Soon enough, dinner was on the table and I hadn’t helped!! (With the exception of eating this appetizer he brought me – and photographed!) 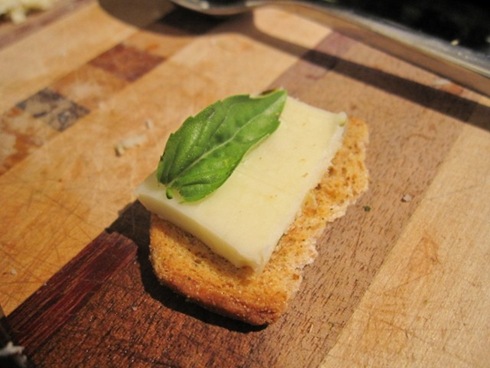 Thus, I asked him to write up the post. I was thrilled to find out he even took photos! There are a lot of "That’s what she said" references in here. Heh heh.

It’s so tempting to buy huge produce, but it usually doesn’t taste as good as a normal sized veggie.  But the allure of giant zucchini won out, so we bought it.  The caveat, though, was that we would stuff it – that way we could enhance (or mask) the likely dull flavors of the zucchini. 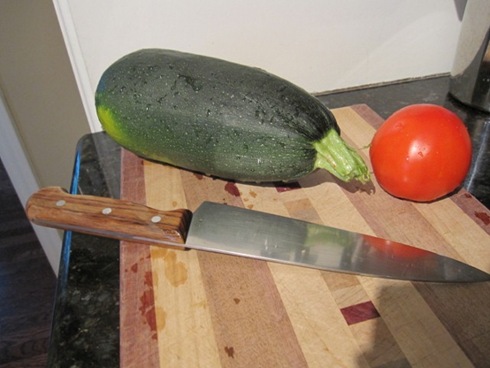 First I got .25C of millet cooking in some veggie stock.  Then I cut the zucchini open – it smelled like a butternut squash or some sort of gourd.  The seeds were big and hard, and the inside was getting stringy.  I scooped this part out and threw it away. 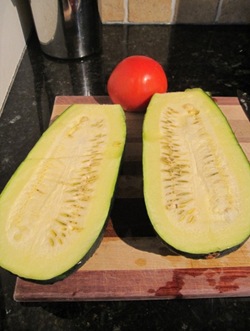 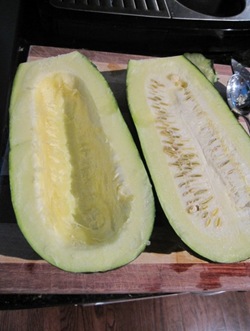 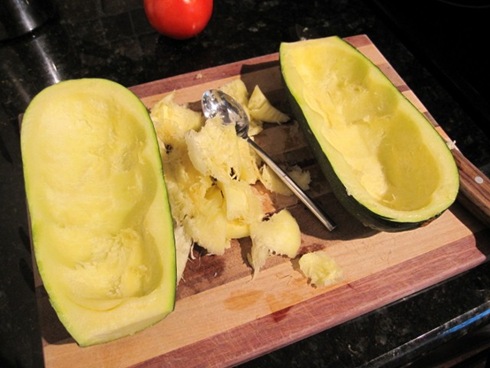 Then I scooped out some more of the zucchini meat, but held onto it for mixing into the stuffing.  I lightly coated the zucchini halves with canola oil and put in the 350* oven for about 15 minutes while I worked on everything else. 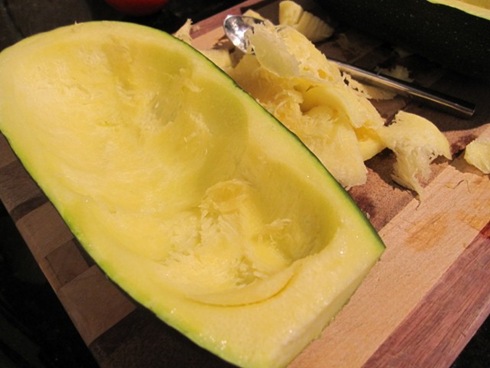 I chopped a large globe tomato, the zucchini meat, and a tablespoon of capers and cooked in a little canola oil.  Season with salt and pepper, red pepper flakes, add oregano and/or basil as desired. 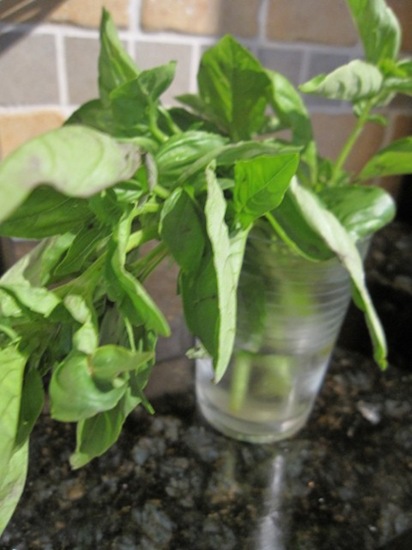 Then I mixed in the cooked millet with a little bit of sherry, and tasted to check the flavors. 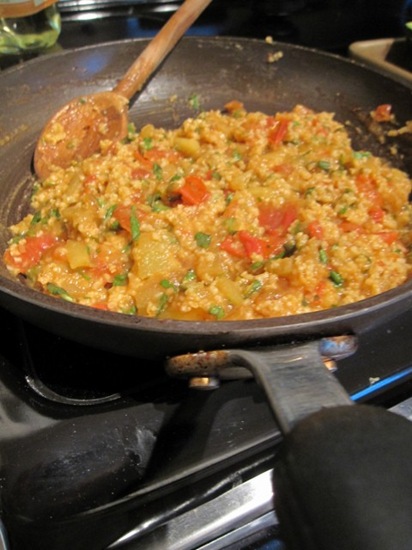 The zucchini had cooked a little at this point, and my only regret about this meal is that I didn’t plan earlier to cook it longer.  Since it was like a gourd, it should have been cooked like a gourd – a good 30 minutes, possibly in a steamy oven. 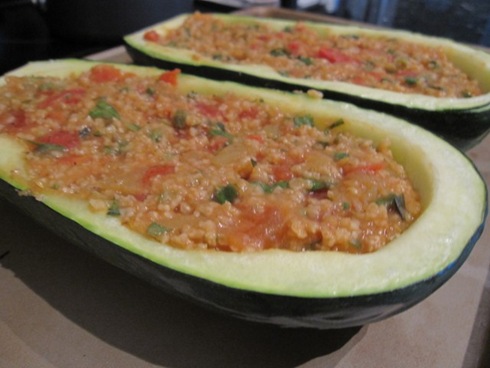 Top with some grated cheese, pepper jack in this case, and bake for about 15 minutes (still 350*).  Again, it could probably cook in the oven indefinitely and this would help soften up the zucchini some more, but it was still fine to eat. 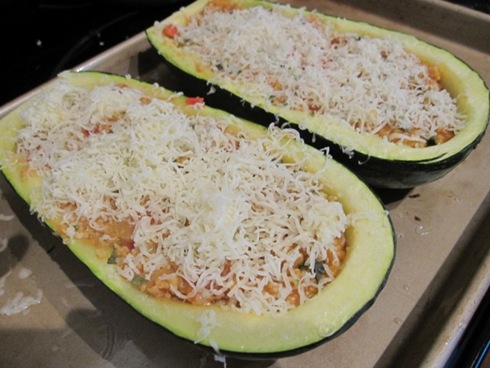 An excellent summer feast!  Might need to keep some toilet paper on hand after this fibrous meal… 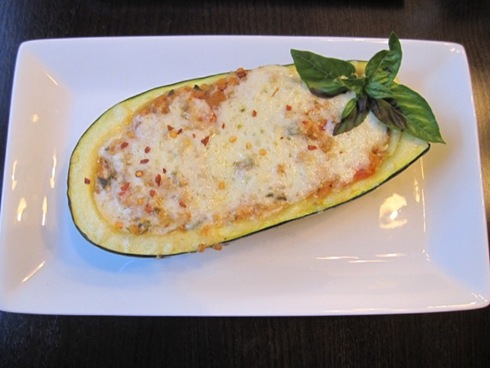 LOL at fiber!!! Exactly the reason why I didn’t eat my whole boat.

Here’s what he looks like when I take my evening blog photos. Waiting patiently to start eating. A true gentleman. 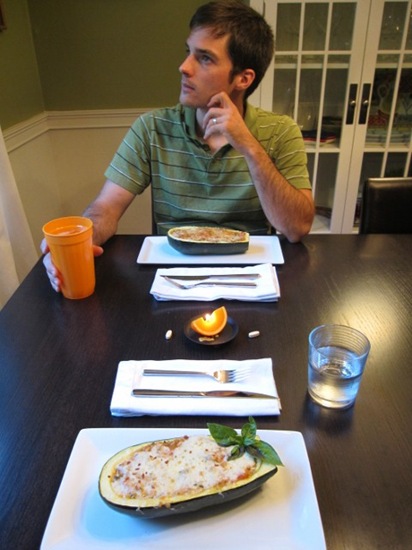 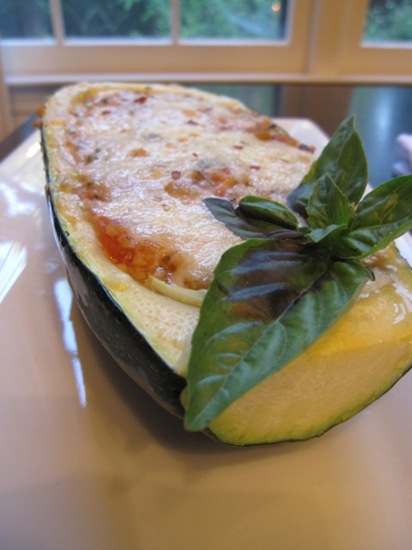 The filling was awesome – super cheese!!

But the boat was indeed undercooked and sorta crunchy 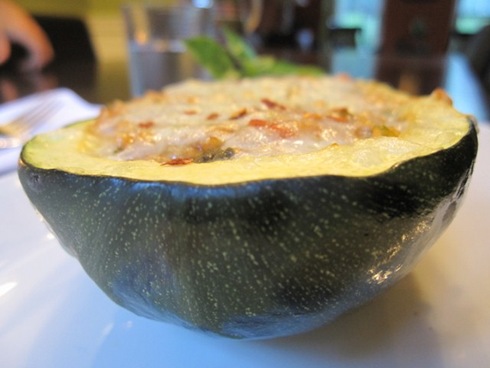 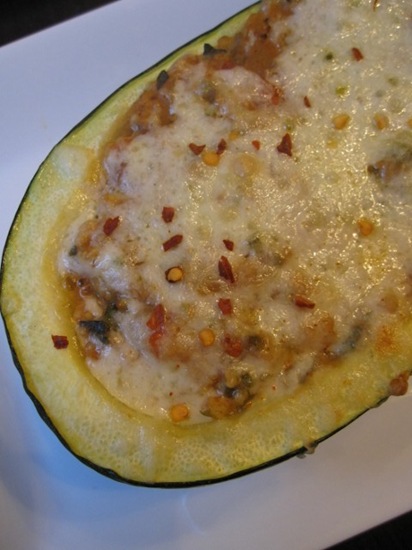 I saved mine – I plan on cooking it more and eating it for lunch one day! 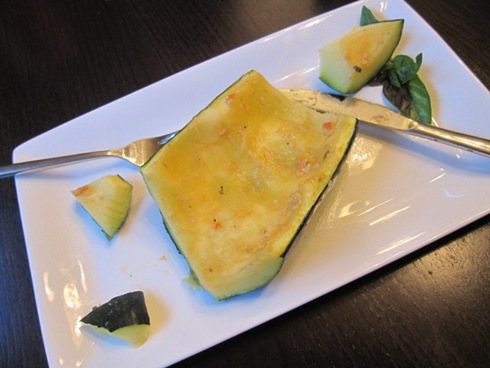 He ate his like an apple!! Crunch crunch. Toilet paper. 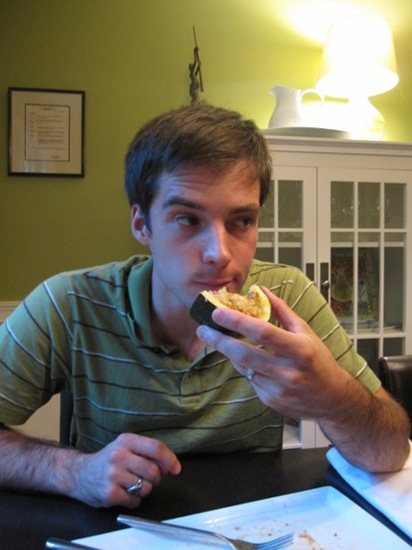 At the advice of Janel at the Summit, I’m going to take my vitamin with dinner. (One A Day Women’s). I don’t have trouble digesting it with breakfast, but I think it takes away the romance of oatmeal to have to remember the vitamin. Dinner seems more laid back. 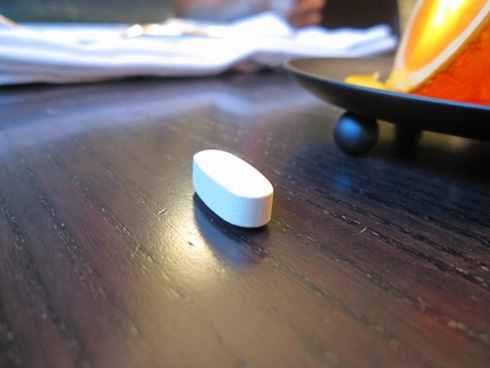 I had a Bliss for dessert 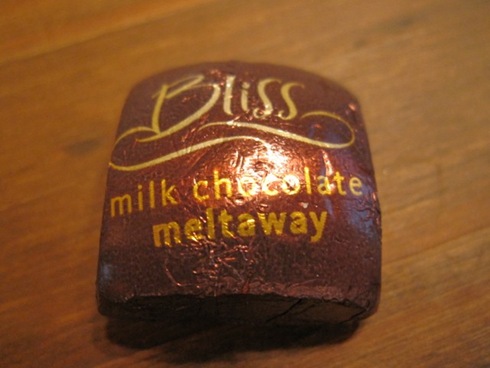 Got an email from Lydia that said: "So good I had to replicate" LOL! 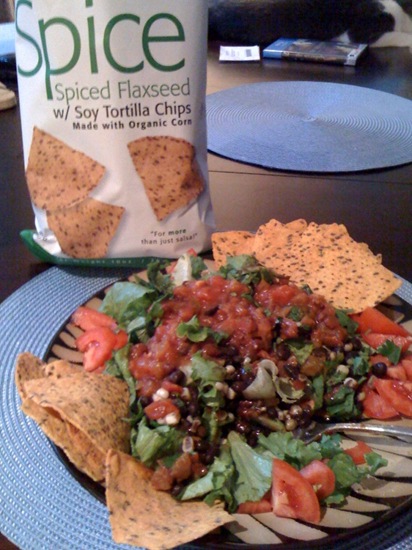 Off to finally relax!!! I haven’t vegged out since Thursday. (Well I guess did veg out at lunch and dinner today 😉 )