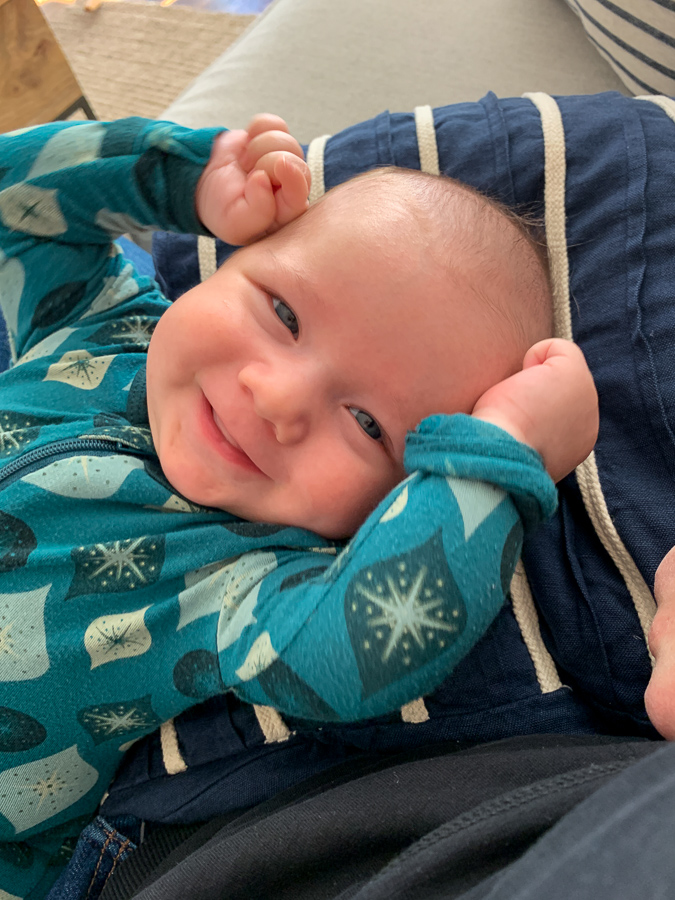 Little B did not nap so well this week. But he did his longest stretch to date at night – just shy of 7 hours! He woke up twice during that stretch making some noises, but he put himself back to sleep both times because I waited to see if his eyes opened before reaching for him. Here’s to hoping that continues! I am LOVING the Halo Bassinet (Bassinest actually) now. When Mazen was this age we went from rock n play (which I don’t like but is good for newborns) to crib (which I could not sleep next to). It’s so much easier to check on B or pat him or put his paci in from my bed with him literally right next to me. He seems to love the mesh sides too. It’s now on our baby items MVP list. 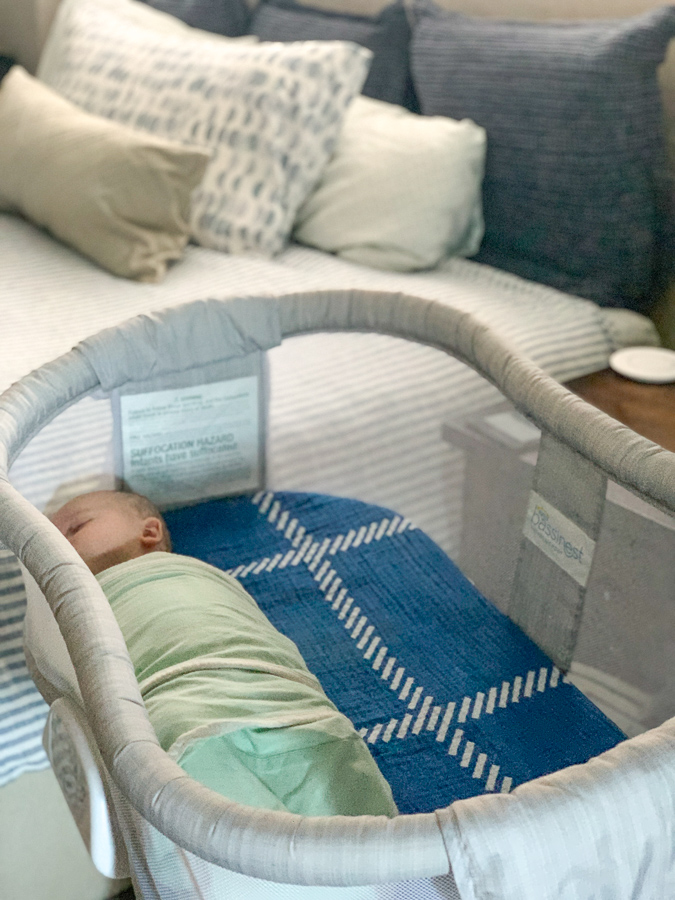 I love mornings! Coffee, sunshine, cracking open my computer and catching up on news and things, feeling like I have the whole day ahead of me. Breakfast foods are my favorite too!

Power toast before a treadmill workout (I didn’t want too much food in my stomach even though I was sipping coffee up until I hopped on. Oops!) Whole wheat bread + banana + PB + chia + honey. 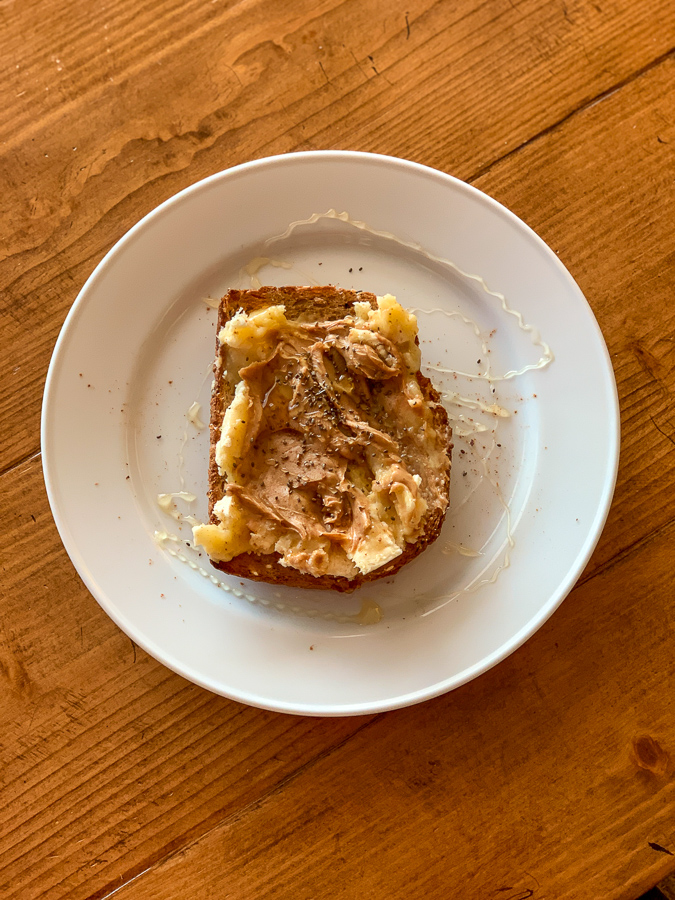 My treadmill (which is 10 years old) randomly decided the incline was stuck at 1.0 and then fixed itself 15 minutes later. No idea what happened but it was definitely broken for a while there! I don’t know what we will do if it breaks down, but I think we would buy a new one. At this point I am convinced that I will continue to use a home treadmill forever, so buying a new one, especially this one that Sherry from YHL recommended for $599, would probably be the one I’d buy. On the tread, I did a 24 minute class on Aaptiv and then followed that with 10 minutes of coached strength training. I also bookmarked some of the shorter yoga flows and hope to do one of those soon!

Birch likes to play with my extra (clean) make-up brushes while I get ready in the morning. 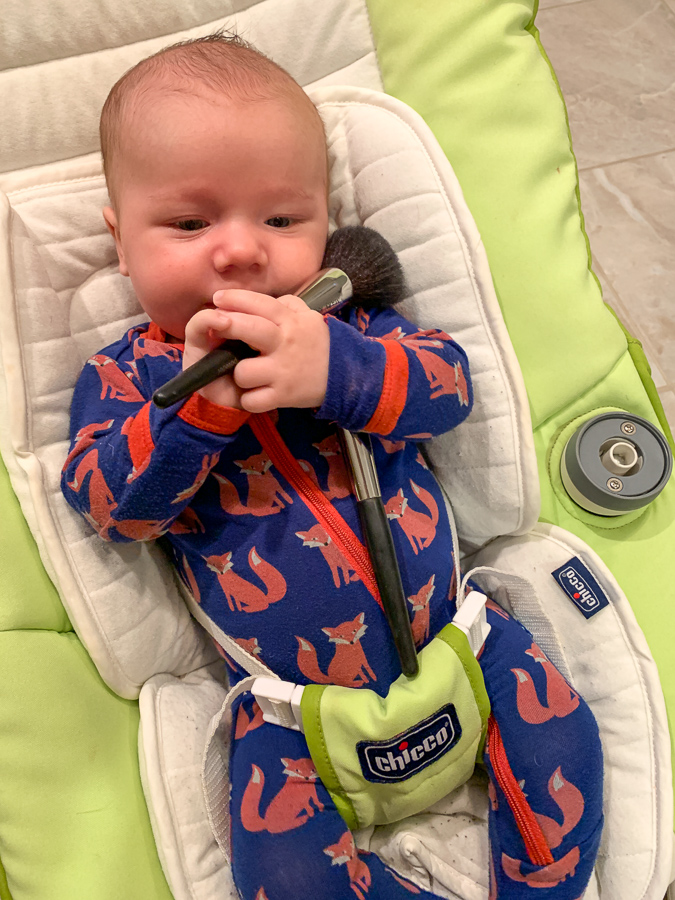 Yesterday Thomas made us egg sandwiches on English muffins with fried egg and havarti cheese. Mine was waiting for me in the toaster oven when B and I came down. So sweet of him! I am eating all the clementines this time of year. 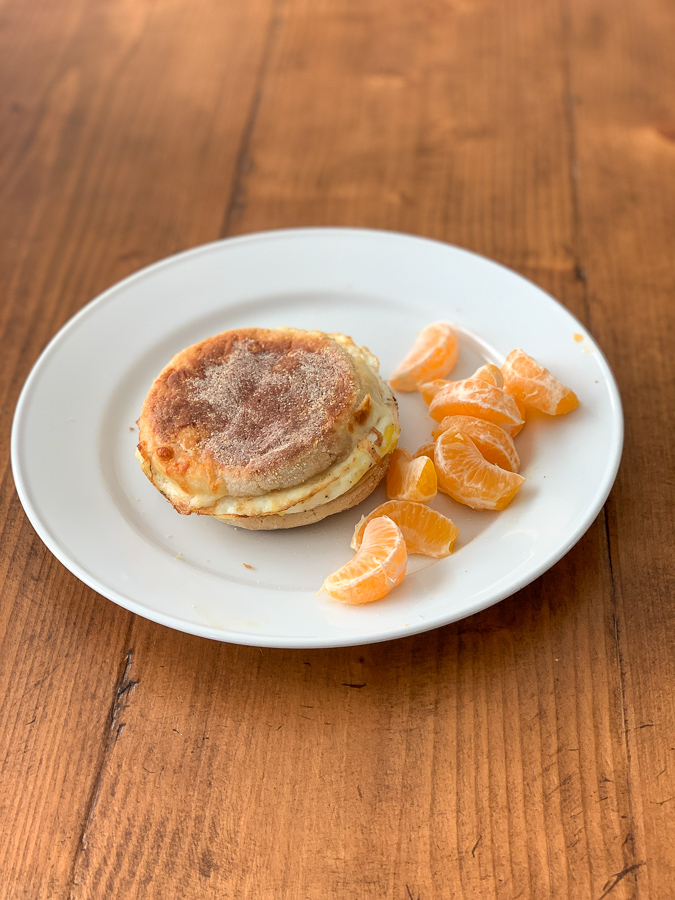 Breakfast #3 from earlier in the week was a Daily Harvest smoothie in a bowl (half of one actually) plus half a bran muffin from Mudhouse. Their muffins are so good with the crispiest top! Still on my bran muffin kick. 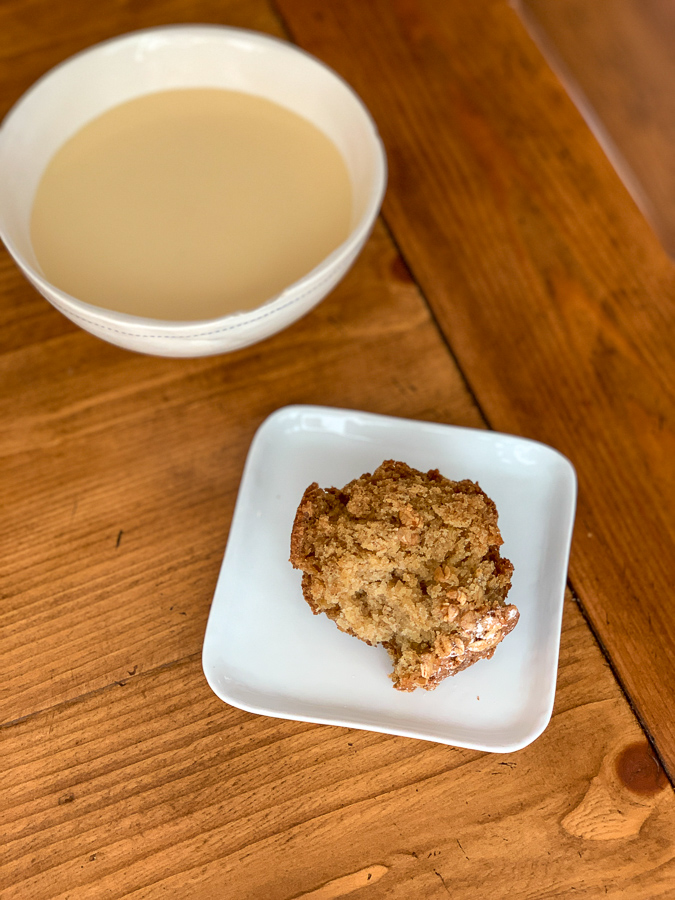 Friday – I’m heading to baby yoga today and hoping to walk downtown and back.

For Mr. B: lots of tummy time! 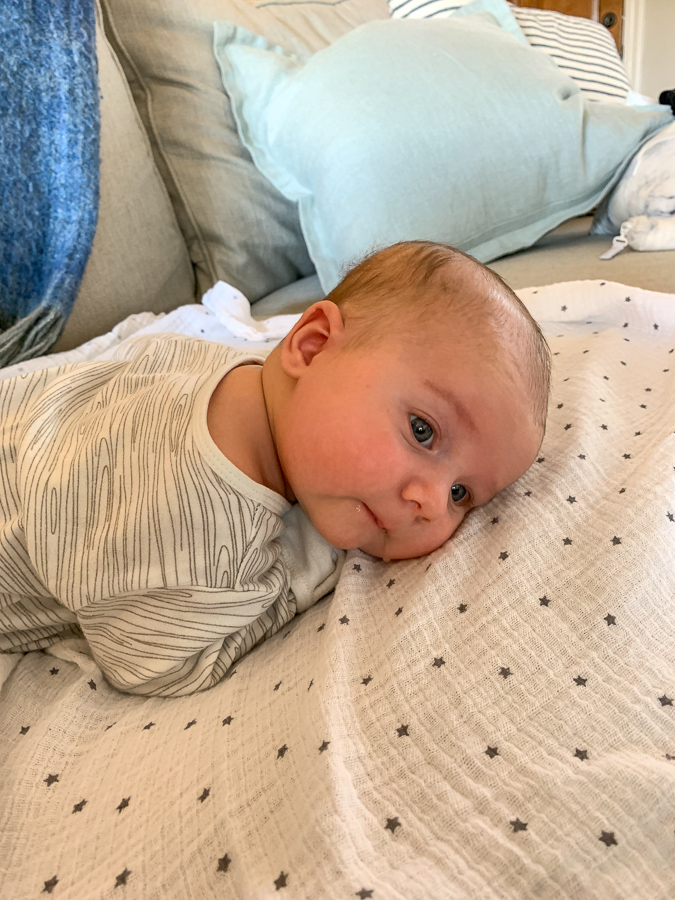 Lunches this week revolved around this amazing farro and sweet potato salad from Plenty. It has a lemon zest and herb dressing with currants and raisins and I don’t know what else, but is freaking delicious!! 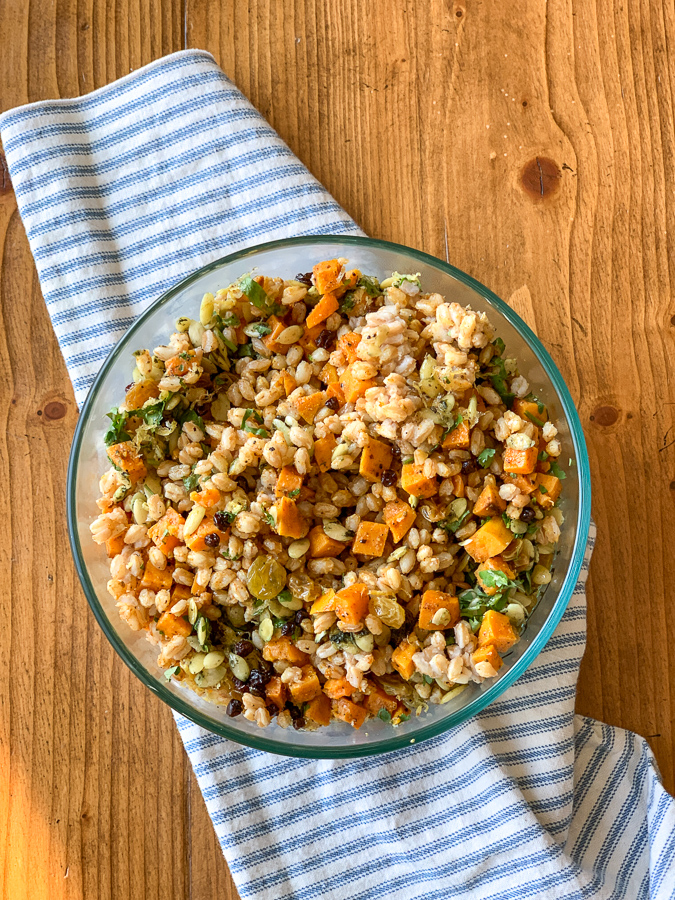 I had it two different days! 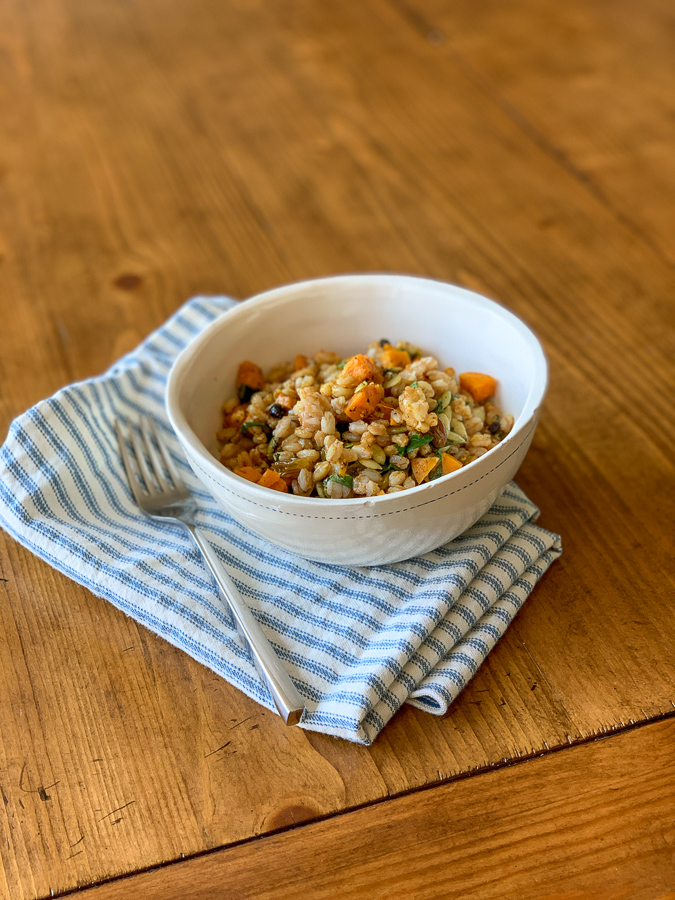 I had a Fage 2% plus peanut butter powder plus chocolate chips for snack a little while later. This was my favorite snack all week! 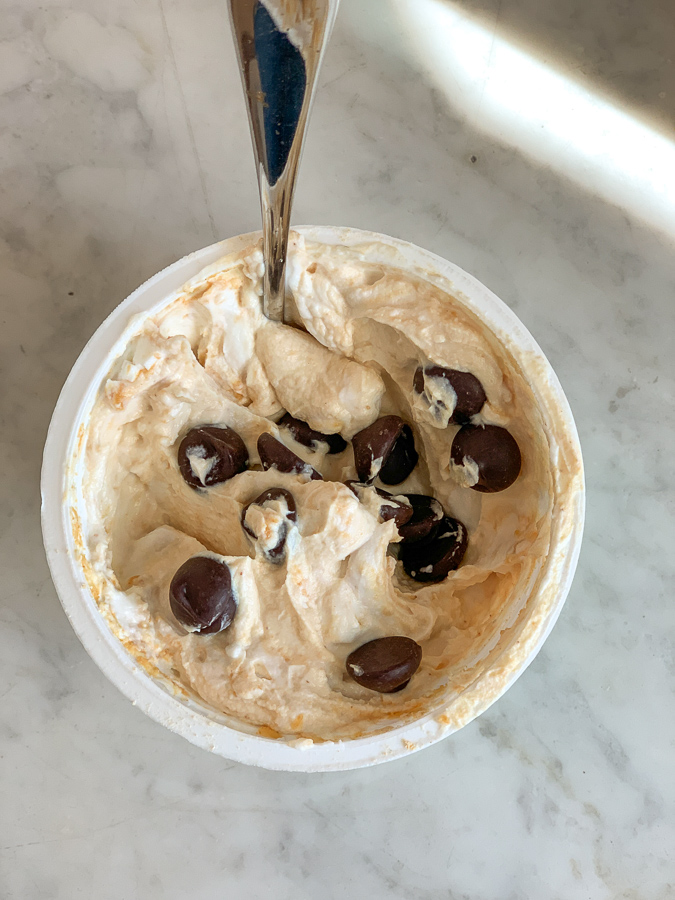 Lastly, Thomas brought me a Bodos salmon, cream cheese, and veggie bagel for lunch one day. The salmon is hiding. Delish! 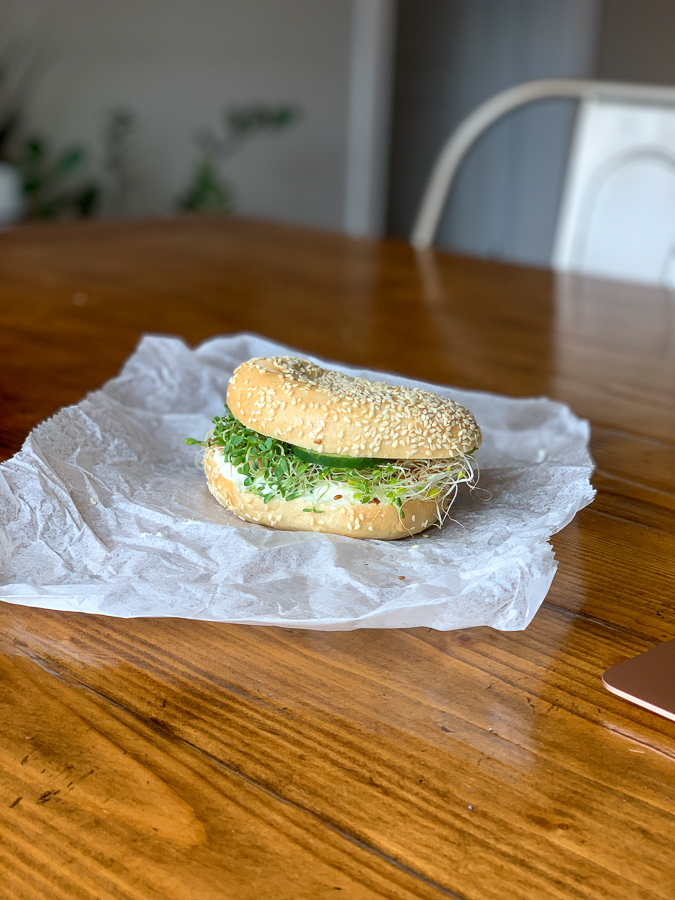 For dinners we had taco night with Mazen. So glad this is one he likes! (His favorite dinners are pizza of any kind, spaghetti and meatballs, quesadillas with spinach and cheese, steak with a side of veggie, and tacos. He does not love soups or mixed dishes so when we have those I do often make him his own little entree but pull some ingredients from the soup (like chicken!) to have on the side. We had cauliflower recently, which I described as “white broccoli” and he had it with chicken. He put it in his mouth thinking it was chicken and the look on his face when he bit down was priceless. Thankfully he laughed and kept eating – so glad he liked it ok!

Note my “mama” place tag and joke book at my plate! We tell jokes over dinner. 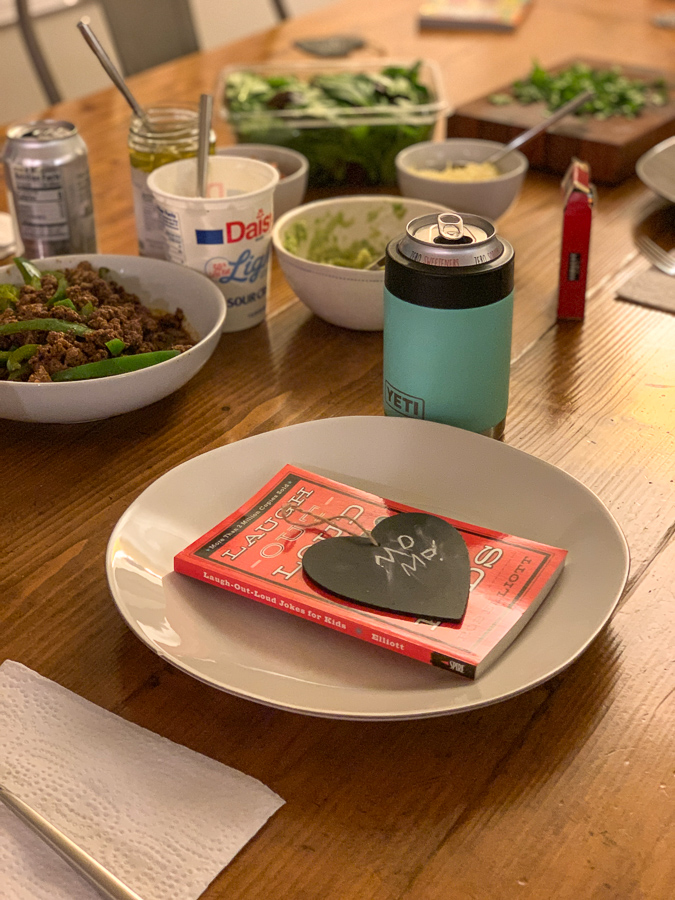 My taco salad had greens, cilantro, Butcher Box ground beef with peppers, jalapenos, sour cream, guacamole, crushed shell, and salsa. Plus a side of soft tortilla. 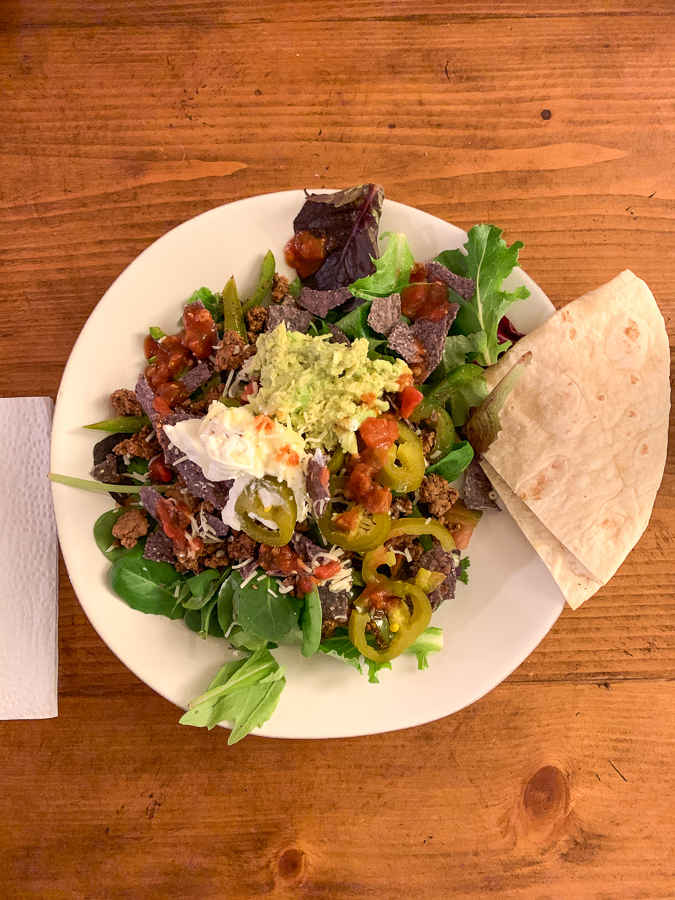 Another night for dinner we had Plenty salmon with lemon-dill orzo. Della uses tons of fresh herbs, and I need to add more to all of my meals! They make everything taste so fresh.

I ordered a second entree from Plenty this week – stuffed peppers with turkey, quinoa, and mozzarella with kale caesar salad with roasted chickpeas. I didn’t take the time to plate it nicely because I was hangry after strength class and dove in. Sure tasted great!! 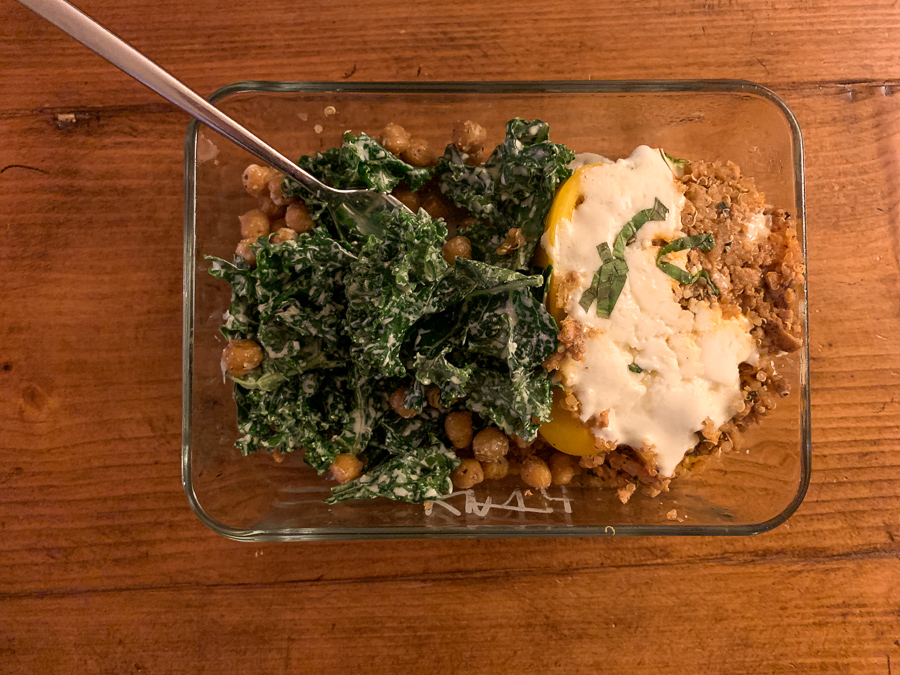 Speaking of turkey, this little one sure is a happy boy! When he’s not nursing or napping, he’s usually smiling <3 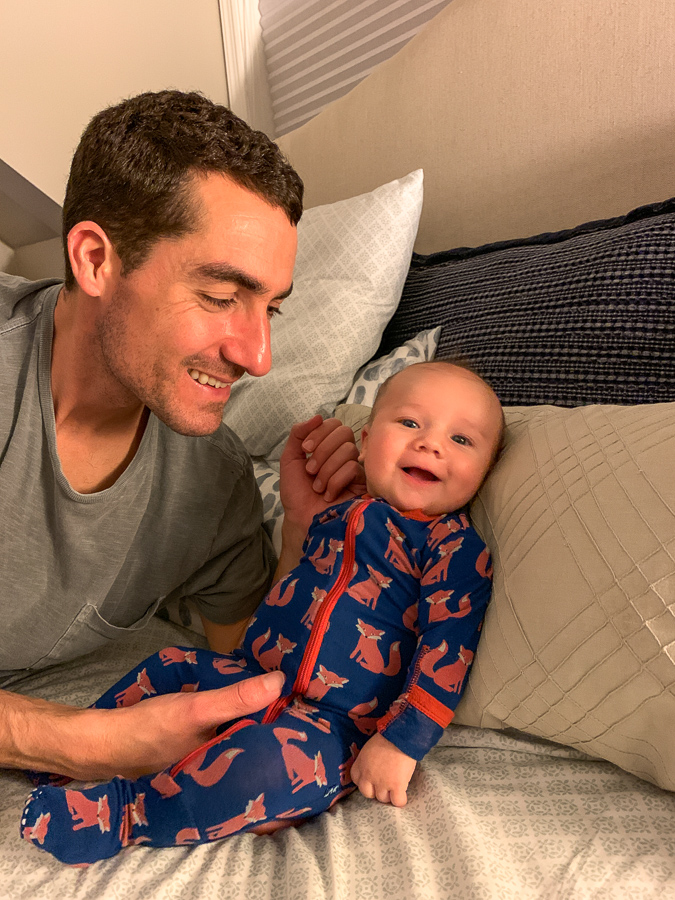