You are here: Home / Lifestyle / Stuffed with Stew! 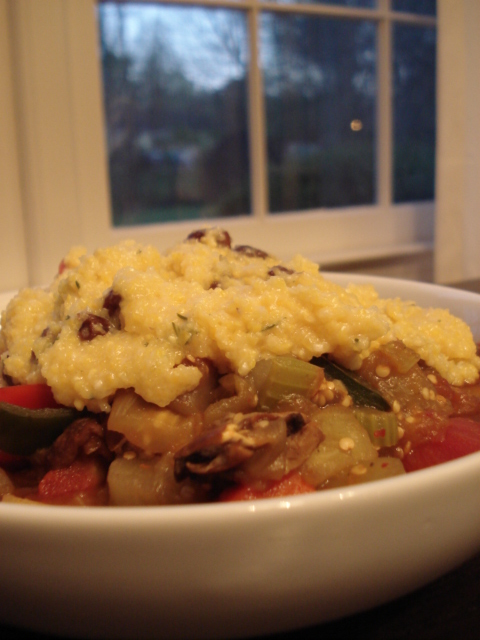 I can’t take any credit for this one! The second I watched Rachel make this recipe on the Food Network last week I knew it was going to the top of the “to cook” list immediately. WOW – it was amazing!

We halved the recipe, so I guess we each ate 1.5 servings. I guess that’s why we’re stuffed! I would recommend either thirding the original recipe if you’re serving two or reducing the veggies a bit (unless you want to feel stuffed too!).

Of course we left out the onion, but otherwise I pretty much stuck to the halved recipe for the stew part. I did use only a tsp of EVOO instead of 2 tbsp. I also completely forgot the tablespoon of balsamic vinegar – which is a real bummer because I bet it would have really upped the stew flavor! Darn!!

For the polenta, we used 1 cup of homemade vegetable stock, half a cup of skim milk, 1/2 a cup of Bob’s Red Mill polenta, 1 tbsp honey, 1 tbsp smart balance, fresh rosemary from the garden, 1/4 cup regular raisins and 2 tbsp grated Parmesan. It was a little thicker than Rachel’s, but tasted great! The honey + raisins were a perfect touch! (And of course I love ANYTHING that’s half savory, half sweet!) 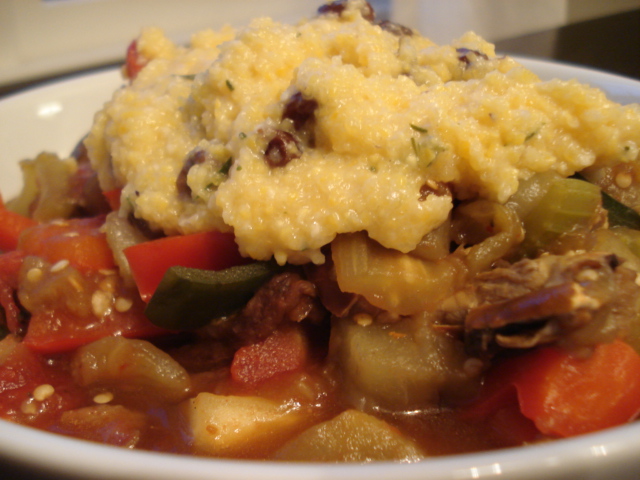 Our version created 2 servings that were about 450 kcal, 25 grams of fiber and 19 grams protein each. I don’t think I’ll be wanting any dessert tonight (although the husband is on the couch eating peanut butter and wafers – guess he’s not too full!) 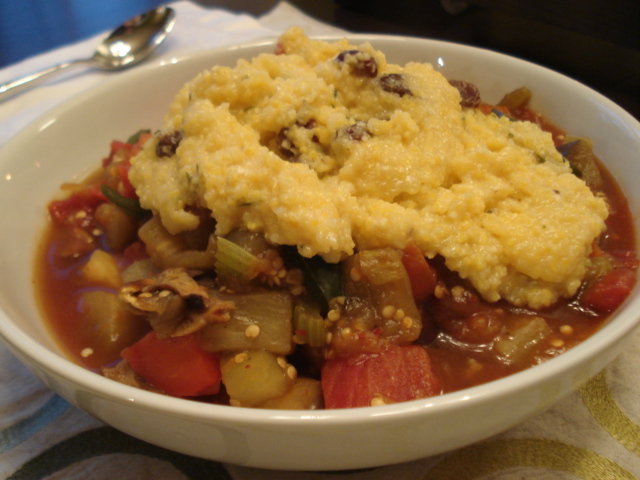 This polenta will be making more appearances soon! I LOVE corn products and this was SO much better than any instant grits (obviously!). I found it at Harris Teeter, but I bet places like Whole Foods and EarthFare would have polenta in bulk too. 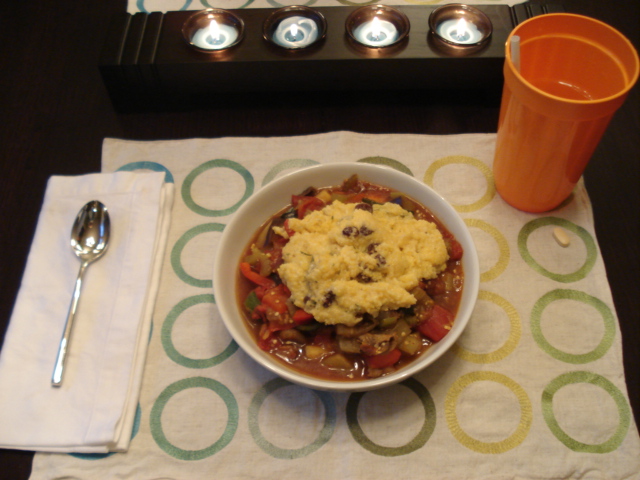 You know, I think I was too hard on my pumpkin bread. It IS good – it’s just not wet/doughy good. Today I toasted a piece in the oven and then put some almond butter between the layers. But in volume-eater style I took it back apart and ate it as two pieces 🙂 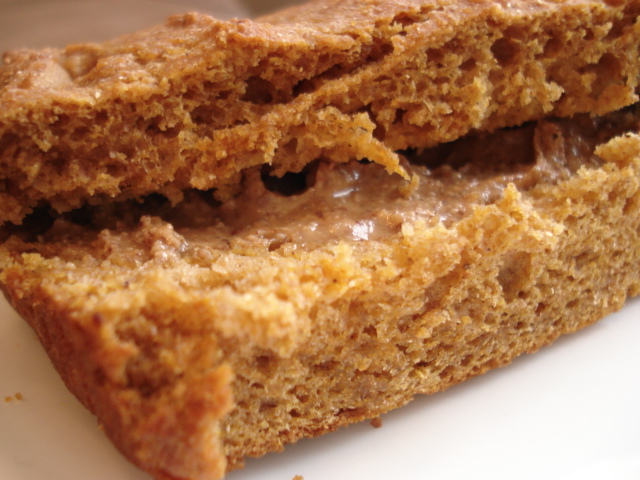 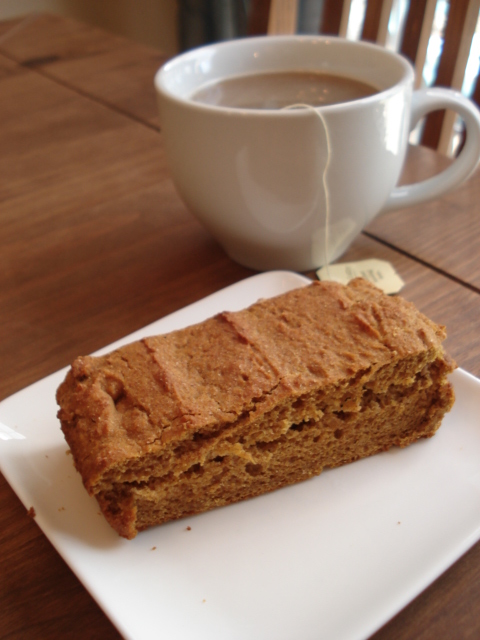 There are a handful of recipes that have looked SO good from Eat, Drink & Be Vegan on other blogs that I had to jump on the bandwagon and get it (well, mom got it for me as an Easter present and it arrived today! Thanks mom!). I need to read it cover-to-cover and mark all the recipes I want to try or I’ll never get around to making them (there are way too many unused cookbooks in this house). I am determined to use this one!

I also FINALLY got In Defense of Food. After Eat, Pray, Love, this one is also being bumped to the front of the line. I’m in Indonesia now in EPL, so it shouldn’t be too long! 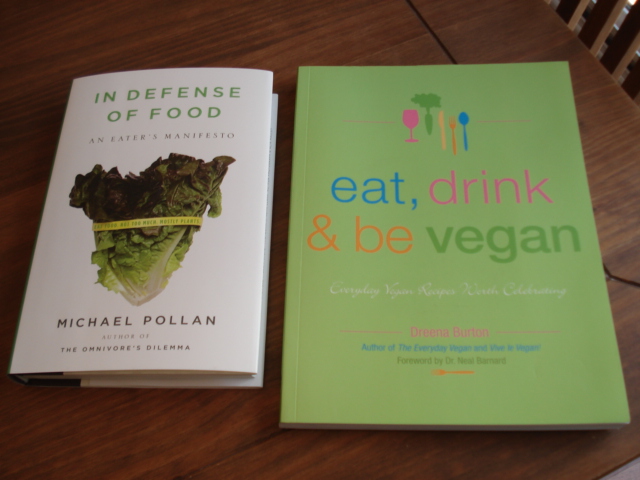 A HUGE thank you to Jessica for sending us a bottle of a New York Finger Lakes Riesling!! I love Rieslings 🙂 We hope to make it to the Finger Lakes wine region someday, as I hear there are some hidden jewels there. THANK YOU again Jessica!! 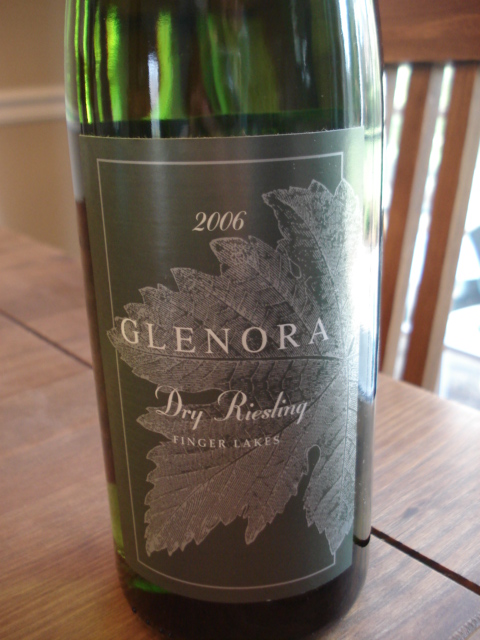