Hi everyone, Matt posting this evening.  Kath was taking a test tonight and since she’d be coming home ravenous for dinner, I was in charge of the meal.  And since I made all sorts of modifications to our base recipe, she just told me to write the post tonight! 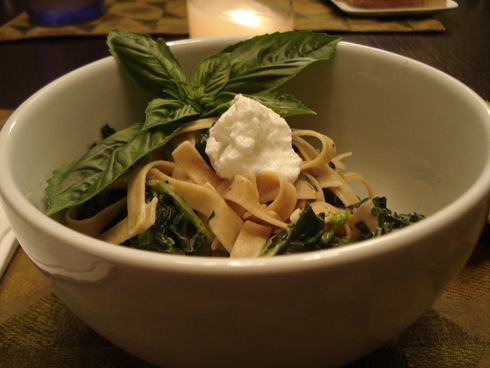 On the menu was Spinach Florentine Pasta, inspired by Jessica’s Florentine Macaroni and Cheese. This was so easy, and I’m surprised to admit that it’s our first time using frozen spinach (I think).  There’s only two steps – cook your noodles in one pot, and cook your other stuff in another pot.  I used 3.5oz Hodgson Mill Whole Wheat Egg Noodles.  As for the other stuff, combine in one pan:

Bring to low simmer over medium heat, then back off to low until mixture thickens a little.  Mix it with the noodles and serve!  I topped it with a dab of greek yogurt and a basil cluster for the presentation. 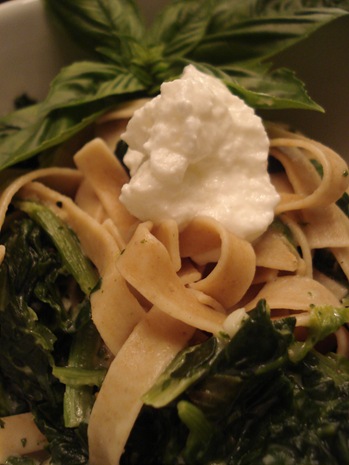 (Kath’s thoughts: I really enjoyed the recipe. The sauce could have been a TAD creamier/thicker, but overall, it was fantastic with tons of veggie bites and just the right liquid level). 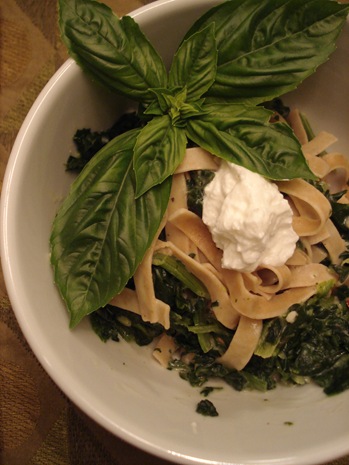 And don’t forget the crusty piece of bread on the side!  Here’s how to make any piece of bread amazing: take a chewy piece/slice/hunk, give it a little drizzle of olive oil, a sprinkle of salt and pepper, and bake in the oven until crispy on the outside.  It makes the perfect dipping bread, and for you “Chewers” out there (like us), it satisfies your carnal cravings. 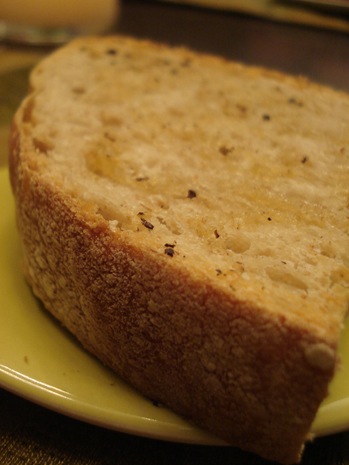 (Kath again: OMG this bread is SOO GOOD!!! He says it’s his ciabatta recipe (look on the sidebar) just baked into a round loaf. I think the secret is baking it with the olive oil.) 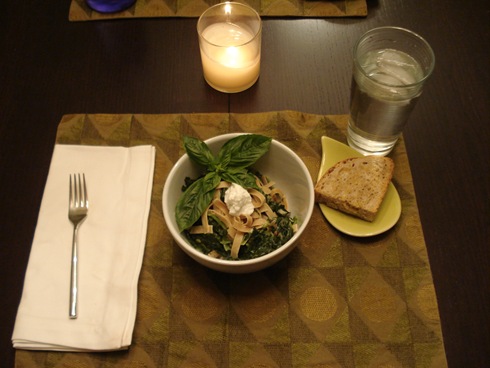 As for the special announcement

I’ve made quite a career change recently!  I wasn’t very happy with the career paths I had been on in the financial world (glad I got out of that one in time!) and the marketing/advertising/PR.  In reexamining my passions for life, there are two things that I realized are super important to me: delicious food, and caring for the environment.  I’ve always been reluctant to pursue a career in food because I didn’t want the lifestyle of a chef, and I was too nervous to take the full leap to become a restaurant entrepreneur.  But I started looking around, and I found a great job….

at EARTH FARE!!!!!!  I’m working in the community coordination department for our local store in SouthPark.  Basically, anything that this specific store can do to relate to the outer community, sponsor charities, attract customers, and sell more groceries is part of my job description.  It’s still in the vein of what I’m good at (communicating, selling, personal skills), but it obviously incorporates my love for food.  So I’m real excited about that, but that’s not all….

Because I also got a job at GREAT HARVEST BREAD CO!!!!!!  I haven’t officially began this job, but the gist of it is GH is opening a new store in the southern part of Charlotte, and they need a guy to come in early in the morning for half the week to do Sponge and Dough work – mixing the doughs, elaborating the sourdough, kneading, etc.  I’ve never directly said this but this is actually my favorite part of baking because that’s the part I have the most control over.  Anyway, as things develop I’ll be sure to elaborate. I’ll be working this job starting at 4:30 in the morning 3 mornings a week. I’m thrilled that I’ll be able to make my favorite hobby “work” and be paid to do what I love.

Most nights the husband cleans the entire kitchen while I blog. I have to say I was SO EXCITED to be the one cleaning the kitchen tonight!! And you-know-who wasn’t that thrilled to have to blog either 😀 But he sure made a great dinner!! I’ve been wanting to make this recipe for WEEKS and it kept getting pushed back on my calendar. It was great!! Like he said, we haven’t ever cooked with frozen spinach, but this was definitely an appropriate time to use it. We both agreed fresh spinach would have been too watery.

GOTR went well today. The lesson of the day was reflection and they had to run in silence. It actually worked REALLY well. They ran more laps than ever! After practice my coach and I went running again – about 30 minutes. It was a glorious run through pretty neighborhoods. I changed into dry clothes and was on my way to class. I had a Chobani with the rest of my box of raisins from GOTR while doing some last-minute cramming. 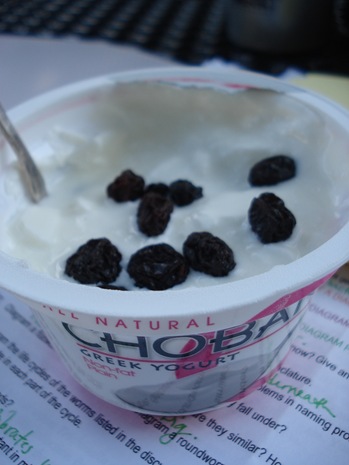 My exam went pretty well, but I have no clue how I did. It all depends on how she grades my answer>s! I got home around 7:45 just in time for dinner to be put on the table. <3 My yogurt held me over perfectly.

So the husband’s big career change = 20% discount at EarthFare for this family!!!!! You can imagine how excited I was with that one. I’m so happy he’s going to be happier now that he’s doing something that gives him end-of-day satisfaction.

Off to bed for my AM workout rest!