Despite the inevitable boredom from a few hours of studying the endocrine system, breakfast kept hunger at bay until 12:30!

The rainy weather had me craving soup, so I pulled out a frozen serving of ED&BV’s Cocoa-Coconut Chili to thaw for lunch. I topped it with fresh lime and a sprinkle of unsweet coconut 🙂 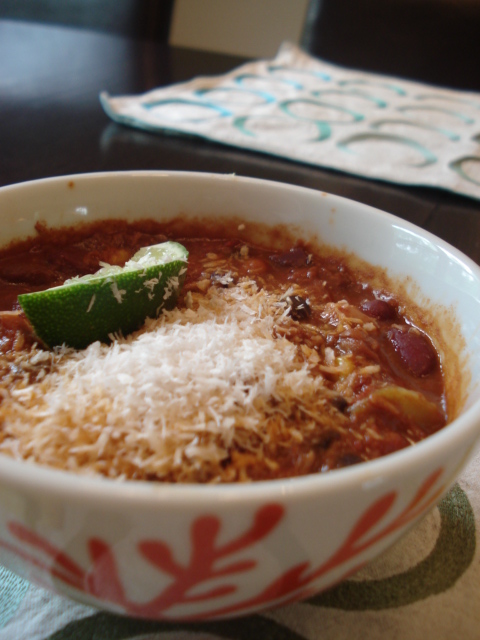 On the side I had leftover zucchini and squash with basil – 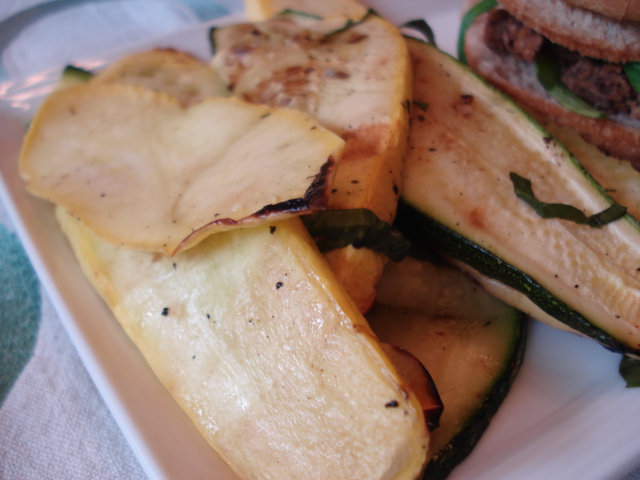 A smashed black bean ball sandwich with spinach and cilantro pesto on a TJ’s Whole Wheat Bun. Pesto adds SO much flavor to a sandwich! 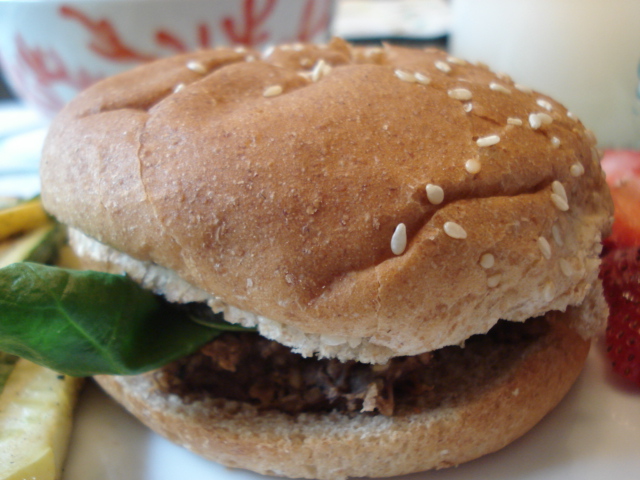 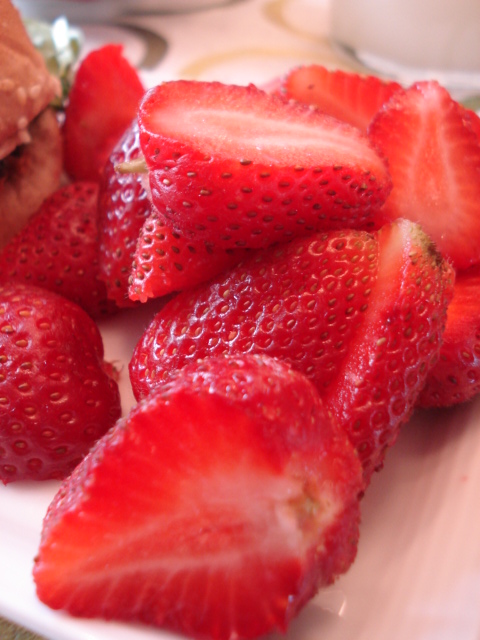 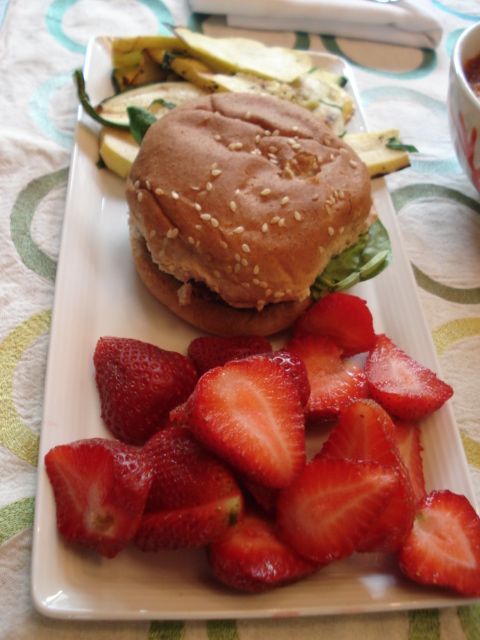 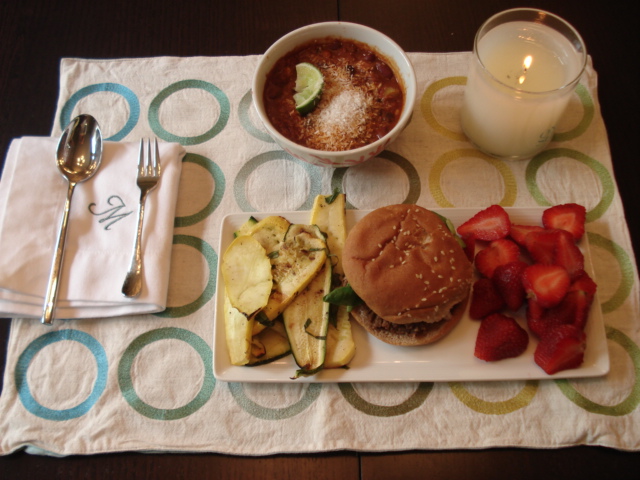 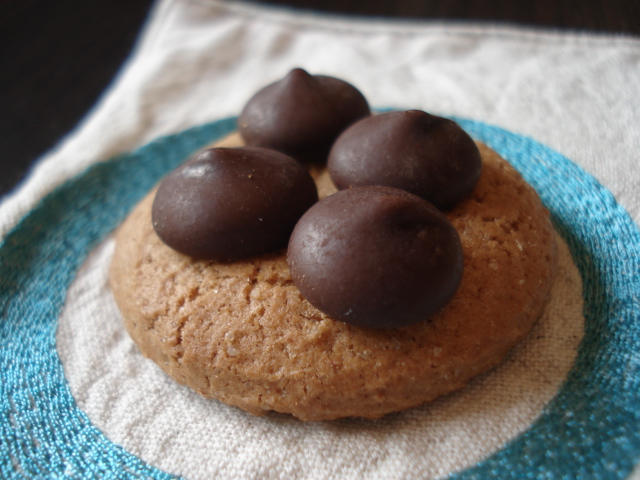 This lunch was about 500 kcal, 23 grams fiber and 23 grams protein. However, it wasn’t very filling and here I am an hour later with a gnawing hunger in my stomach. But my stomach isn’t growling, so I bet it’s “hunger” = thirst. I better go chug some H2O before I go hunting for an early snack.

A Word About Freezing Soups

I am no expert at freezing things and have lots of trouble with freezer burn (and with my super-tasting tongue, that means I have to throw it out at the slightest bit of it because I can taste freezer burn a mile away). However, I’m pretty good at freezing soups! We fill freezer-safe quart bags with the soup once it’s cool, label them with the type and some hint at how big the portion is in calories, and then lay them flat on a cookie sheet to freeze flat. Perfect stackable soups!

But the one thing I have never been able to master is getting the soup back out of the bag easily. Today I figured it out!! I put it in the microwave on auto-defrost until it was no longer solid, then I snipped the bottom of the bag and squeezed out every last drop piping bag style. Messy problem solved!

(I realize this photo looks pretty gross, but I thought the visual would be helpful!) 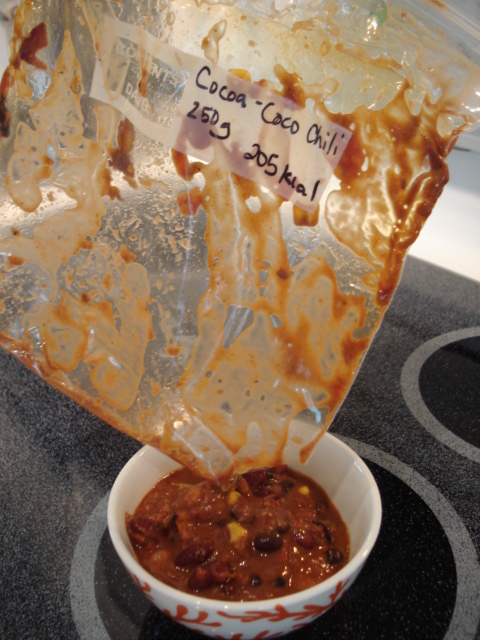 After a morning TORNADO WARNING, we’re starting to see some sun poke through the clouds! In about an hour I am headed Uptown to hear Hillary Clinton speak. Then the husband and I are going out to dinner at Sonoma Modern Kitchen! Anyone want to give me menu suggestions again!?

I’m going to try to eat light and healthy since I ate away from home a lot this weekend and have a big beach trip coming up the second half of this week.

And I’ll leave you with some good advice on dealing with cravings from SELF Magazine’s May issue.

I often think the thought of eating something is more fun than actually eating it. This realization has helped me wait out my cravings. These researchers seem to agree:

A study published in Behavior and Research Therapy revealed that women who accept that they lust after Hershey’s Kisses found it easier to resist the urge to unwrap them. Researchers taught the women in the study to recognize their limited ability to control their thoughts about certain foods. Then they encouraged them to give themselves permission to have those thoughts and let them go rather than acting on them. “Thing of cravings like any other tic in your body, like hiccups and itches,” Forman says. “Tell yourself, ‘My mind is having a craving right now.’ Pretty soon, you’ll see that the impulse to order something fattening is not the same as actually ordering it.”