You are here: Home / Lifestyle / Over The Top

I think the husband and I went a little over the top with breakfast today. See below!

I decided to skip spinning – I wasn’t in the mood, probably from my double dose Friday/Monday. So I ended up doing 30 minutes Stairmaster, 10 Squirrelliptical followed by pull ups and push ups. I think my upper body has really gotten stronger – I can easily do 3 sets of 10 pull ups on the 70lb assistance now. I used to only be able to do 80 lbs assistance!

Before I left I had a Banana Muffin Top with a bit of PB&J. I was going to have it plain, then added a dollop of jam. Then I thought PB would make it even more delicious! 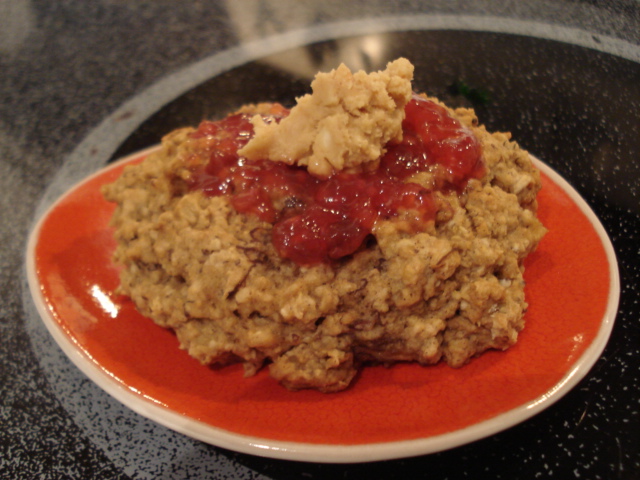 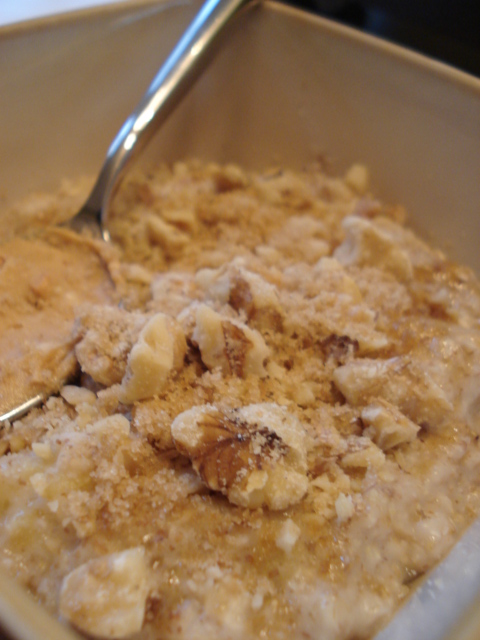 But the real breakfast event was the husband’s ICE CREAM SUNDAE oatmeal! I have been tempted to put some of our Soy Delicious Peanut Butter Chocolate ice cream in my oatmeal – just as a treat one day – but I was always nervous how it would turn out and didn’t want to “spend” my breakfast so extravagantly if it wouldn’t taste amazing. So I used the husband as a guinea pig and he tried it – about half a cup of the ice cream plus a big handful of walnuts (those of you who want to know how we eat differently – his mix-ins are always heartier than mine!)

Had I made this version, I would have just used 1-2 tbsp of the ice cream – not half a cup! 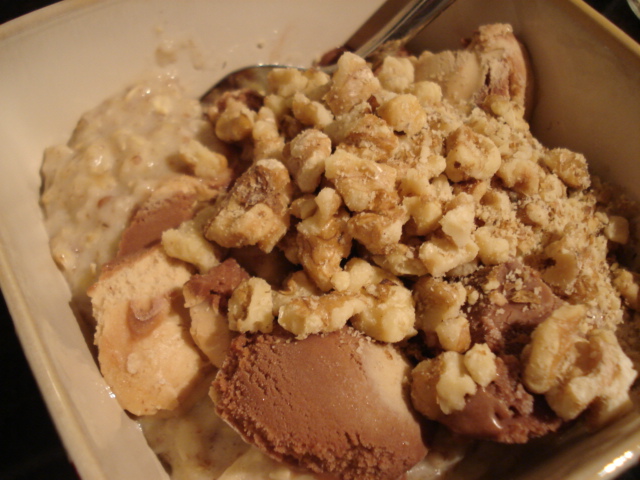 I had 2-3 tastes. It was amazing at first, but as the ice cream melted, the flavor dissipated and then I’d say it wasn’t worth the extra calories and sugar. So I don’t think I will ever have it myself, but it was a fun experiment 🙂 While the Soy Delicious ice cream has a fine nutrition profile for dessert (made with soy milk, cane sugar, and some other natural ingredients), it really doesn’t offer much nutritionally for breakfast other than a delicious taste. But before it melted all the way, it really did “cream up” the oats and they tasted like they were floating on PB air. Once melted, you could get the same effect with cocoa powder and plain PB.

My breakfast from above. And despite the monogrammed napkin, my last name doesn’t start with an “M” – someone didn’t know I didn’t change my name upon marriage and got us these monogrammed napkins last year. They’re pretty though! I’m rather fond of my Y initial 😉 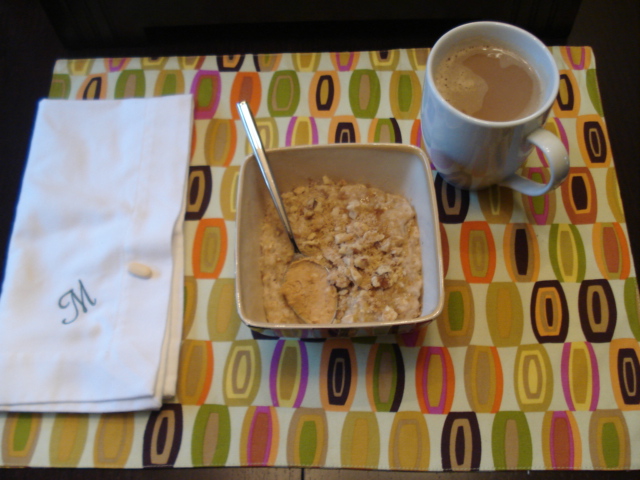 My breakfast was 470 kcal, 9 grams fiber and 18 grams protein. But add in a few extra bites of Sundae Oats to that!

Two classes and the weekend of relaxation begins!! If only the forecast was a little warmer and sunnier…