You are here: Home / Weekend / One Bowl Lunch + Dinner

Pardon me for combining lunch, snack and dinner – I was out running errands after lunch and then had kitchen things to do so I just figured I’d post all it once 🙂

Nice long run this morning – about 5 miles. We ran through a really fancy neighborhood and ooohhed and ahhed at the mansions. It helped pass the time! 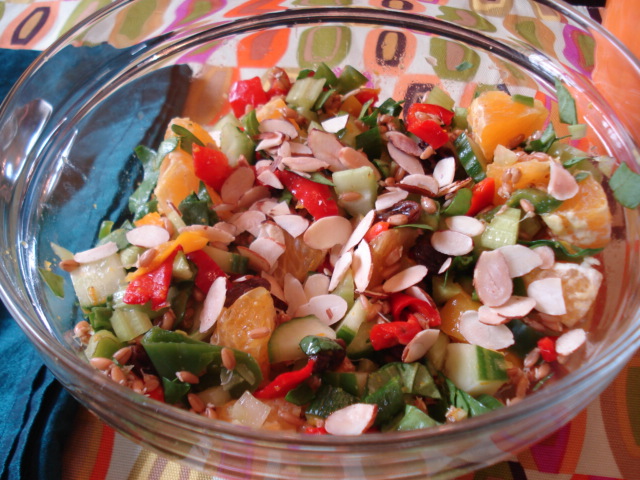 We had leftover sprouted wheatberries on hand from the husband’s baking so I decided to mix them up as a salad for lunch. I used about 3/4 a cup, which is about 240 kcal worth. They are really chewy and delicious!! Almost rubbery in a really good way. Here’s some info on how to prepare them yourself. I found them at EarthFare in the bulk bins so look around at your local health food store (I’m sure Whole Foods will have them you lucky ducks who shop there).

I added the rest of our veggies (the veggie drawers were COMPLETELY empty after this) cucumber, a handful of spinach (chopped), celery and the rest of a bag of frozen bell peppers.

I also added in a whole navel orange (and used some of its juice for the dressing) as well as a rehydrated mini box of raisins. 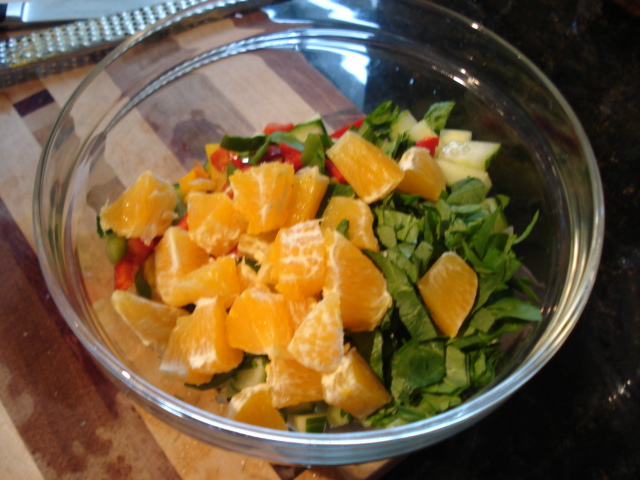 I made the dressing out of orange zest + juice, raspberry vinegar, zesty mustard, a tsp of honey, S+P. 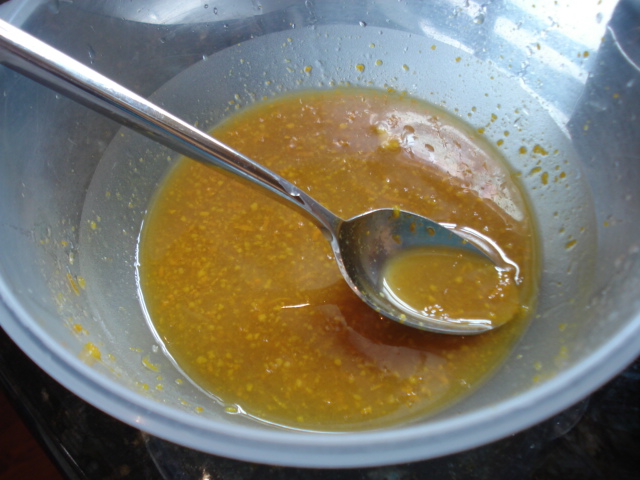 Lastly, I topped the salad with some sliced toasted almonds.

Healthy fat, check (but if I’d had avocado it would have definitely been added too!) 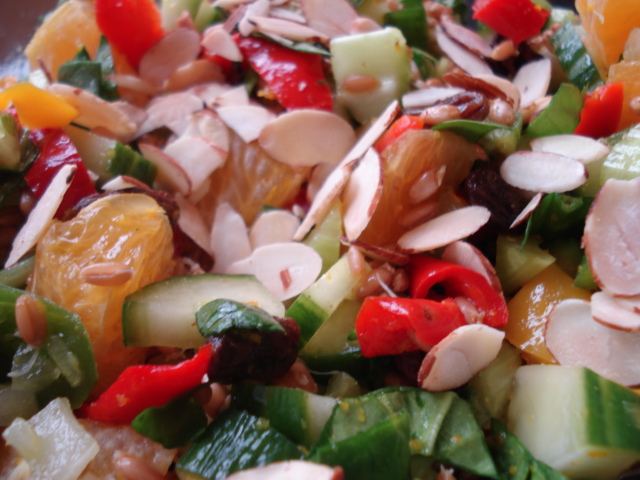 Check out the wheatberries up close – 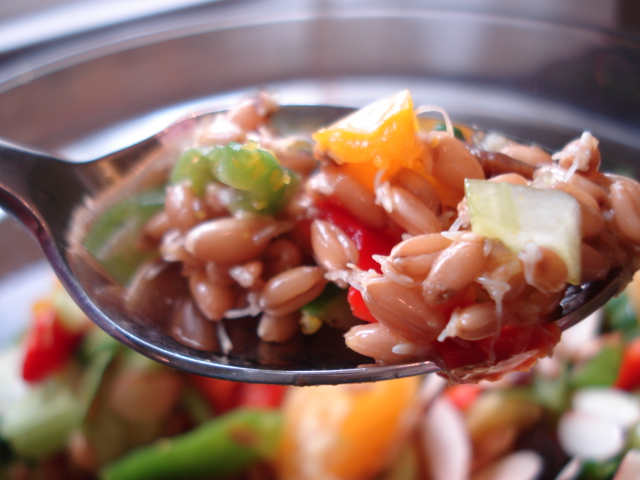 Normally a “one bowl lunch” would leave me unsatisfied (mostly mentally) but this was super satisfying, probably because of the variation in flavors and it was a big bowl! 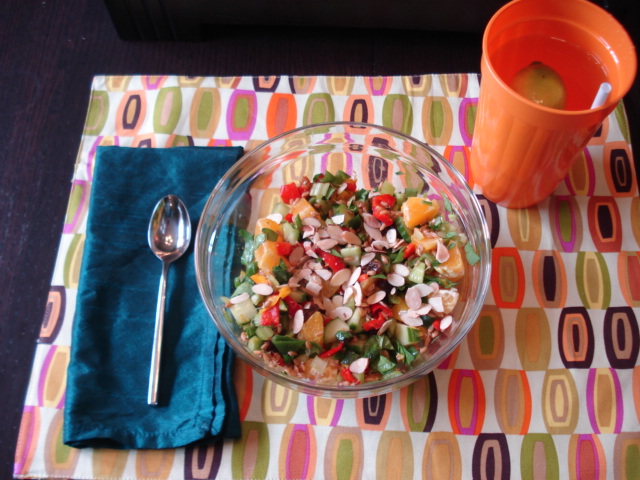 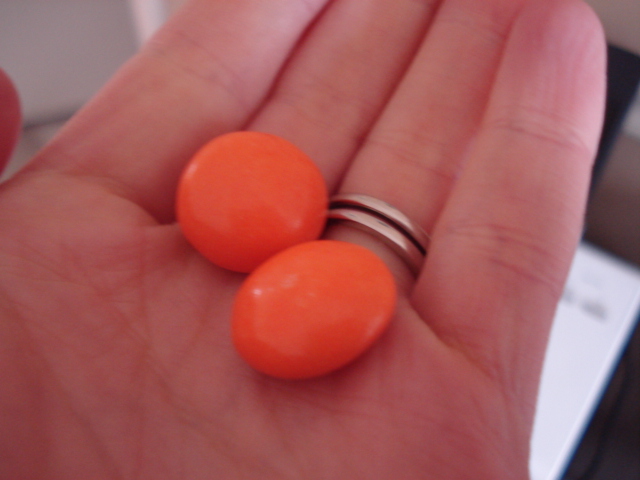 I went out and ran errands, including a trip to EarthFare for buns. While there I sampled a tiny bite of short ribs, a wasabi peanut, and lemon hummus on a pita chip. Just for the record!

While I was out I stopped into Barnes and Noble to browse through the cookbooks for scone recipes (mostly to check out Veganomicon’s Pumpkin Scone recipe!). But I stumbled across Vive le Vegan! After flipping through it for 30 seconds, it came home with me. I immediately saw at least 5 recipes I wanted to try. I think what I like about Dreena’s cookbooks isn’t the vegan draw (since I’m obviously not one), it’s the fact that this cookbook was written by a normal person who is really good at experimenting in the kitchen. The recipes just feel different than your standard “cookbook.” These are the first cookbooks I have ever read cover to cover!

So I gave a shot at her Squirrelly “Scones,” which she says don’t really taste like scones but look like them. She was right – they are oat cookies! But super healthy cookies! I left out a lot of the dried fruit and just ended up putting in walnuts and flax. But they are quite yummy! A touch of maple, a touch of cinnamon, oats, whole wheat pastry flour. They didn’t satisfy my scone craving, but they are good. 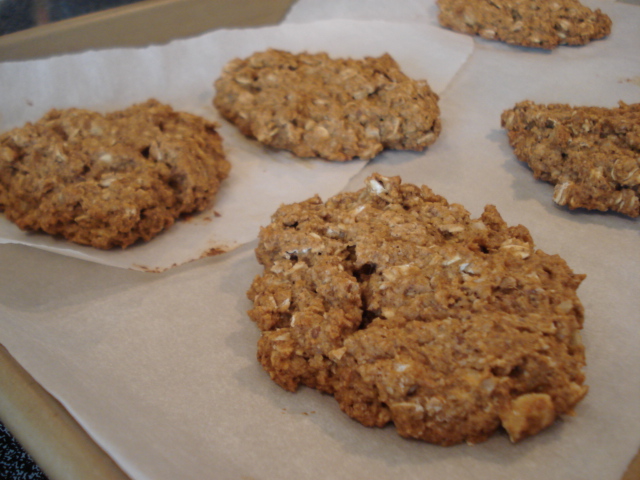 I think next time I’ll put in dark chocolate chips! These turned out to be 130 kcal each. They are a little small for the calories, but at least they’re healthy calories. 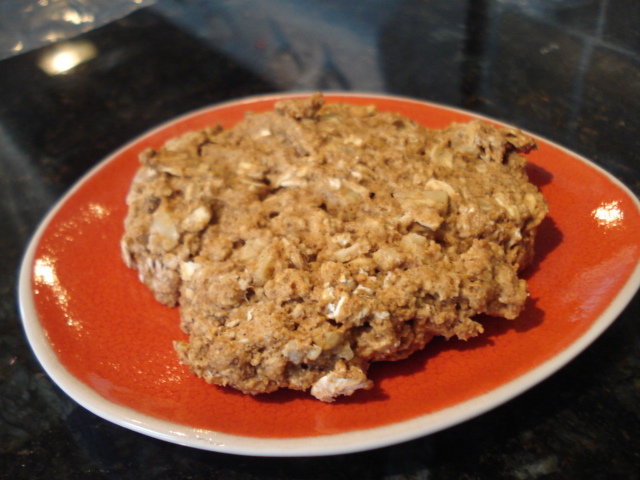 Look what the husband and I created 🙂 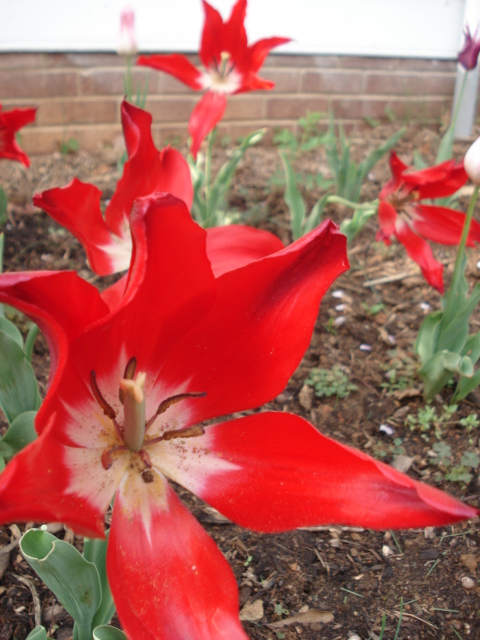 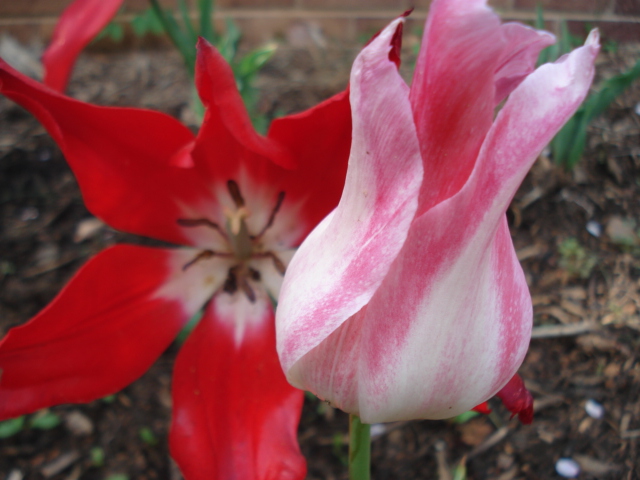 Dinner tonight was ED&BV’s Rosemary White Bean Soup. It was actually very disappointing. Too watery and very bland – even with all the rosemary fresh from our garden! BUT, we fixed that with homemade croûtons (which she recommends with the soup) and Parmesan cheese (sorry, vegans!). 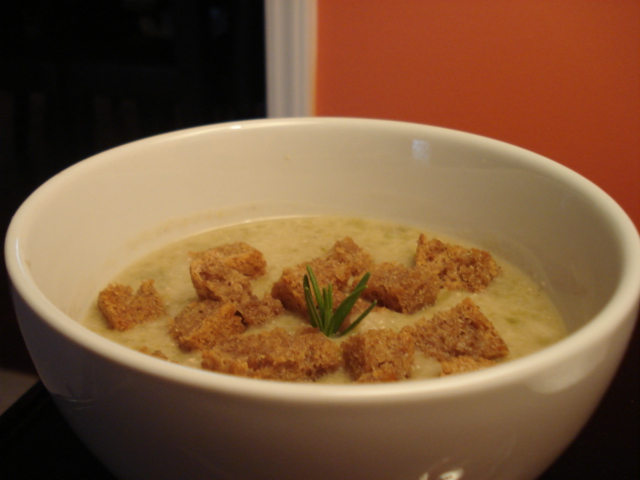 With a tbsp of grated Parm – it made ALL the difference! 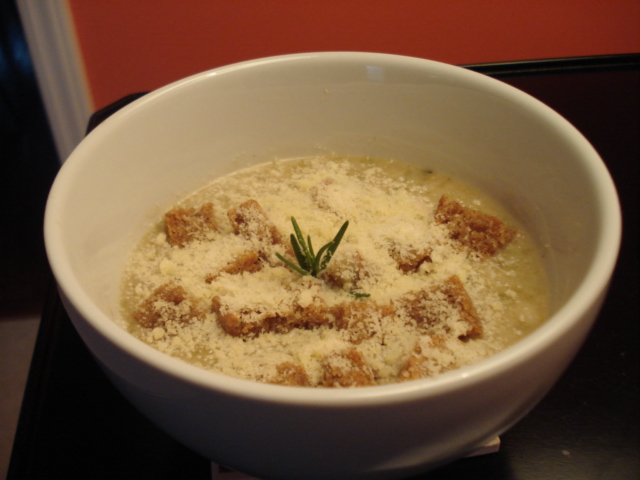 The croûtons, made from homemade spelt bread, were fabulous! We just cubed the bread (3.5 oz worth), drizzled on a tsp of EVOO and some salt and baked for about 12 minutes at 400*. LOTS of flavor! 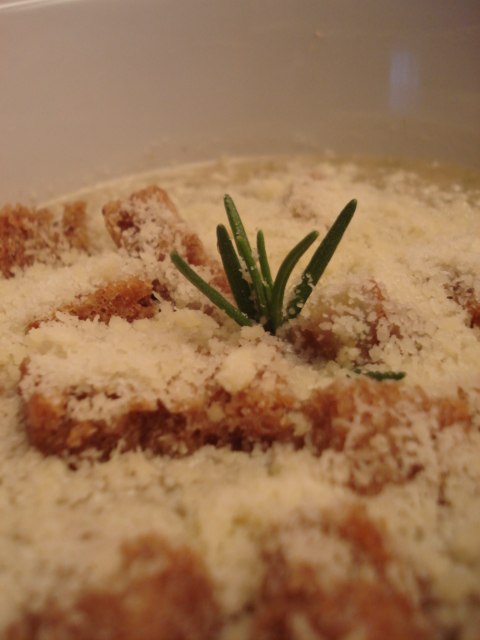 Speaking of olive oil, here’s a cook’s tool I LOVE! It’s an olive oil holder (from Crate and Barrel) that you squeeze to bring OO into the top part, which measures 1, 2, 3 tsp or 1 tbsp for you. It’s so nice not to have to dirty up a measuring spoon! 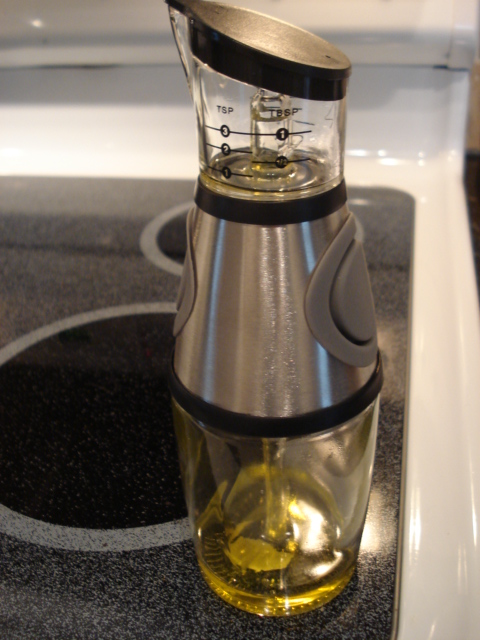 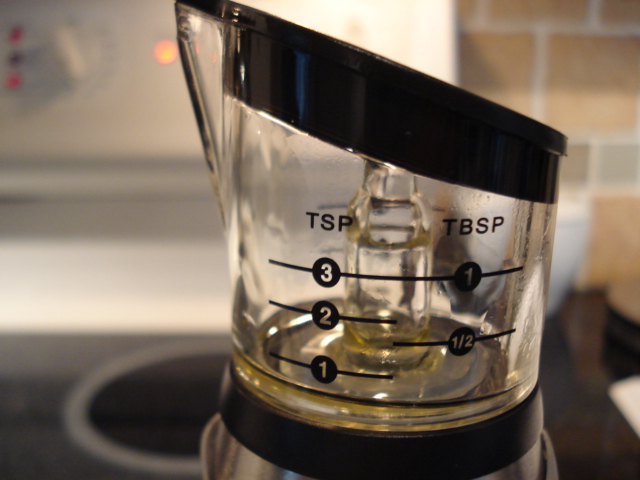 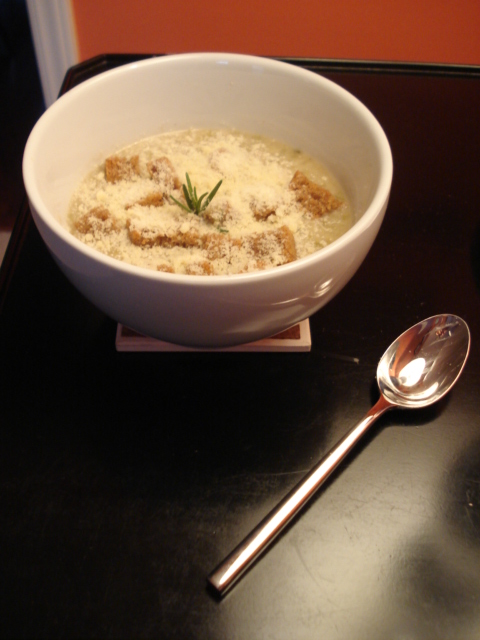 The husband made these nut and seed sweet crackers with a homemade yogurt-sugar icing. (I think he’s planning on doing a whole recipe page for his next batch.) I tried one for dessert! 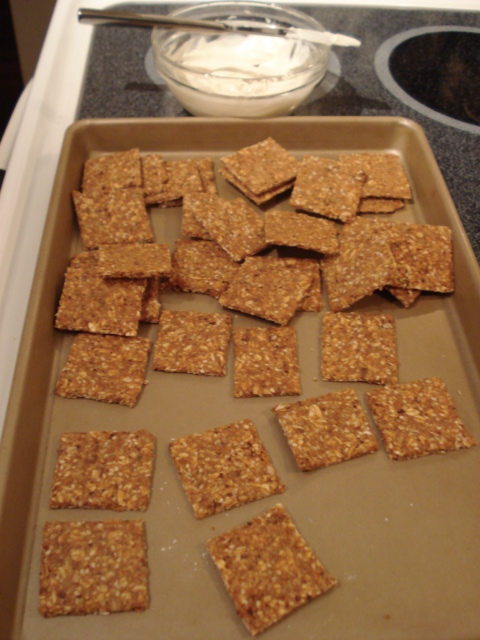 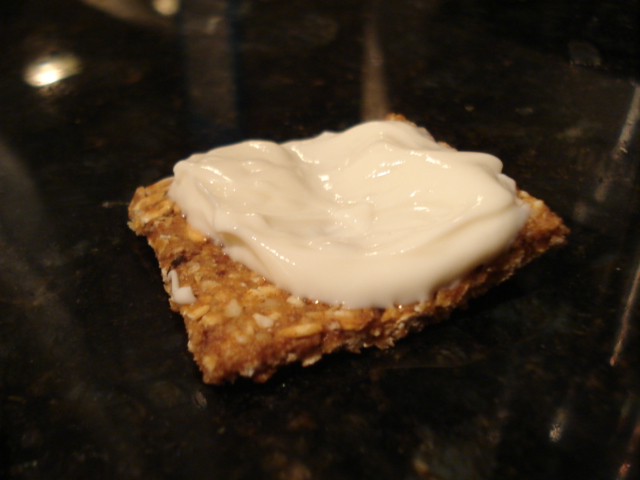 See you guys tomorrow for the start of another week!