You are here: Home / Lifestyle / Mishaps

Thanks to the husband for making my breakfast this morning! He had to be at the bakery uptown at 7:30 and decided to bike there for his workout. So I headed to the gym solo. (I did 35 minutes of stairs plus 10 cooldown on the ET and upper body lifting). He said as I was leaving that he was going to make some Cheese Danish Pancakes and he’d leave some out for me.

I came home to a lovely plate, and a note that said they’d failed again. My conclusion? It’s the whole egg. The yolk must weigh them down too much. They work find with the carton-style egg whites (although they are still a big challenging to flip – but the wetness is what makes them danish-y so I still love ’em). We haven’t had carton whites on hand in ages, so I guess if we want to make these again we need to have some in stock. Thanks for the effort though xoxo 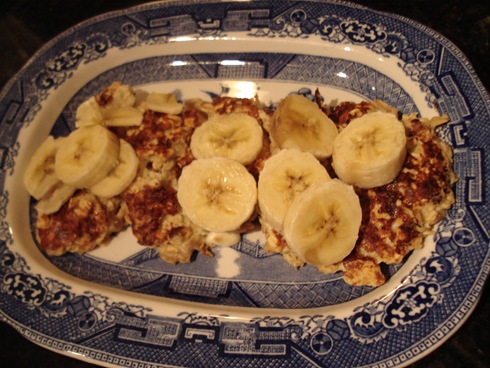 So after my shower and stuff, the pancakes were cold so I decided to just turn them into porridge like we did the last time they failed. I put ’em in a pot with some soy milk and more water and let them cook down and thicken. I also added a few tbsp of spelt berries.

Topped with a bit of granola plank, sliced almonds and PB. 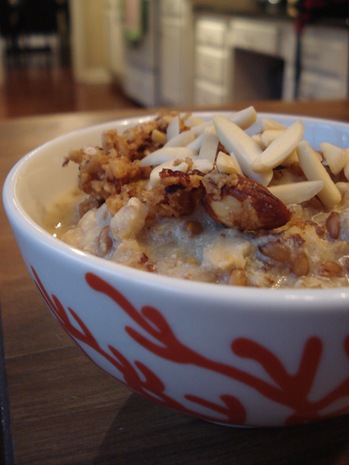 It worked, but something (cottage cheese? soy milk?) curdled and although it tasted fine, the consistency was quite gross. 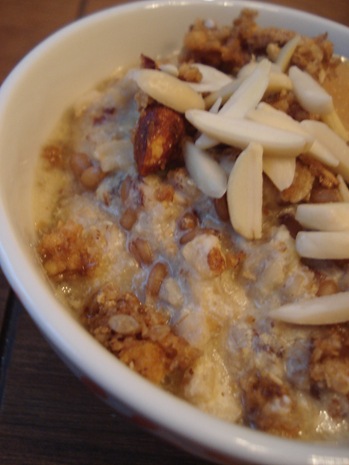 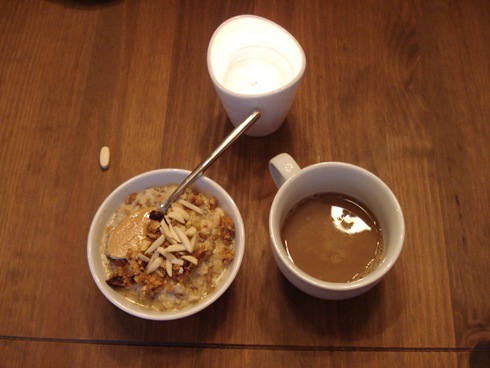 So I made some tea (egg noggin’ with soy) and am sipping that in my to-go cup.

ANOTHER mishap: my computer is powerless!! I think it’s a power issue because the printer is also off. Sometime between when I left for the gym and my return everything went dark. I am hoping it’s a fuse and I even went out to the fuse breaker and took a peek. There’s no way I’m touching that box!! Worse case it’s the whole outlet. So I’m on my laptop right now.